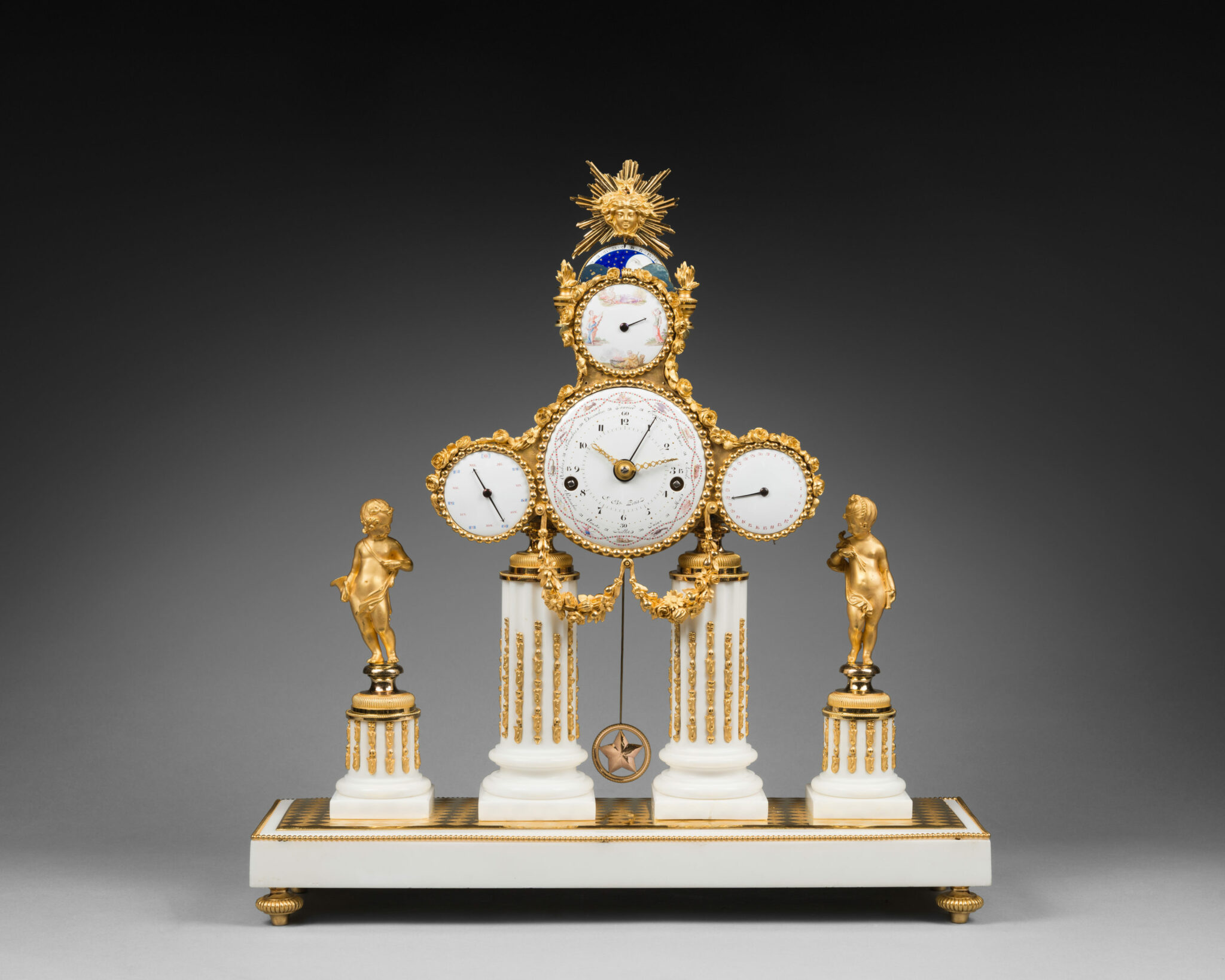 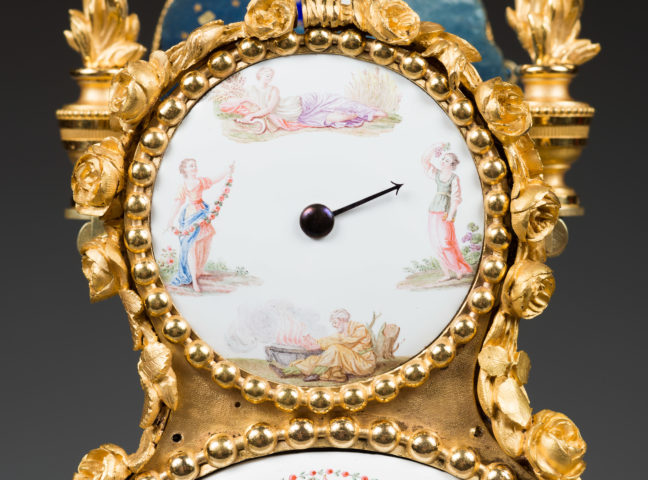 The enamels attributed to Joseph Coteau

The main white enamel dial, signed “J. Bte Petit”, indicates the Arabic numeral hours and fifteen-minute intervals by means of two pierced gilt bronze hands. A third blued steel hand indicates the months and their respective zodiac signs, within an outermost interlacing flower and leaf garland. Two round auxiliary dials, one on each side, indicate respectively the date and the days of the week with their corresponding astrological signs, by means of two blued steel pointers. A fourth dial, placed above the main dial, shows the four seasons, personified by four allegorical polychrome female figures; it is surmounted by a blue enamel dial with gold stars, which indicates the age and phases of the moon. The movement is housed in a magnificent white Carrara marble and bronze case; the bronze mounts are finely chased and gilt with matte and burnished finishing. The clock is surmounted by an Apollo’s mask with sunrays. The four main dials, within beadwork frames, are attached to a lobed plate that is adorned with rose branches. Beneath the main dial, a flower and leaf garland hangs from three roundels. The front and back plates are linked by tabs adorned with flaming urns. The plates, between which the mechanism is fitted, rest on two fluted and rudented columns that have molded bases and capitals featuring pedestals with gadrooned toruses. On either side stand two small truncated columns, also fluted and rudented, with molded bases; they support two statuettes: a lightly draped girl holding sheaves of wheat, and a boy with a hunting horn. The quadrangular base, whose terrace is decorated with matte and burnished lozenges, is adorned with a beadwork frieze and is raised upon four feet with gadrooned friezes.

Although the present exceptional astronomical clock bears the signature of the clockmaker Jean-Baptiste Petit, he was the merchant who sold the clock on the Parisian art market. The clock may be confidently attributed to clockmaker Hubert Martinet, one of the most talented and mysterious French artisans of the second half of the 18th century. Martinet appears to have owned the rights to his own clock models, which he sold in Paris and London. This facilitates the identification of his work, which seems to have been limited to only a handful of models that the clockmaker produced with several variations. The present model appears to have been one of the most successful, being appreciated by many of the influential horological collectors of the time. Martinet seems to have made only a few examples of it. Among them, one similar clock that was made for the English market and has two thermometers, one filled with mercury and the other alcohol, was offered on the Swiss market (illustrated in D. Roberts, Continental and American Skeleton Clocks, Editions Schiffer, 1989, p. 20-21, fig. 9). A second example, with identical dials but a much less elaborate design, is in the porcelain room of the Bordeaux Museum of Decorative Arts (Daniel Astruc bequest in 1953; Inv. 53.9.14). One further similar clock, also featuring two white Carrara marble allegorical figures on either side, is in the Paris Musée des Arts et Métiers (inventory number 01406-0000); it is much smaller (31 centimeters) and its overall design and bronze mounts are much less elaborate. It bears the signature “Martinet London” on two enamel medallions on the front plate. 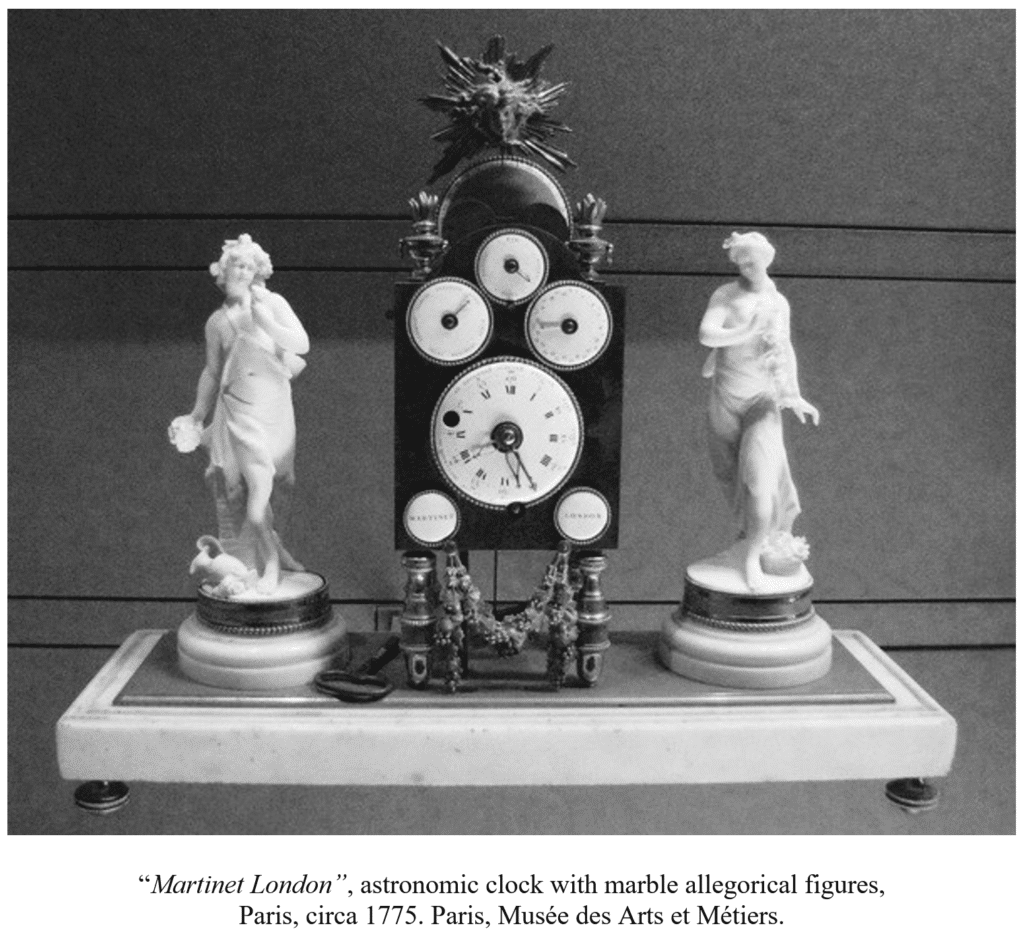 Concerning the signature of the clockmaker Petit, Geoffroy de Bellaigue discovered a document in the Archives de la Seine that documents Martinet’s bankruptcy on June 7, 1777 (see The James A. de Rothschild at Waddesdon Manor, 1974, Volume I, p. 141). It is likely that that temporary financial setback, which Martinet encountered in the late 1770s, led him to cede a portion of his stock to some of his creditors. Thus, Jean-Baptiste Petit was probably able to acquire the present clock at that time. It was most likely already finished; the clockmaker would only have had to ask an enameler to place his signature on the main dial.


Hubert Martinet was one of the most important Parisian artisans of the last third of the 18th century. Active in Paris and London as of 1768, he quickly gained renown due to his exceptional talent. He created some of the most elaborate clock models of the period, including several automaton clocks with elephants, a spectacular example of which was formerly in the Rothschild collection and is now in Waddesdon Manor near London (see G. de Bellaigue, The James A. de Rothschild at Waddesdon Manor, London, 1974). The fact that the clockmaker sold his creations in the two most important European capitals of the time suggests he was a shrewd businessman who knew how to adapt his production to the desires of the important collectors of the time. However, despite his success, Martinet seems to have encountered financial problems in the late 1770s; an inventory of his stock was drawn up in Paris for his bankruptcy proceedings. Nevertheless he continued to work until long after the Revolution, since upon his divorce in the mid 1790s, he was still described as a clockmaker. Lastly, Martinet was not simply an artisan, but was often called a “marchand-mercier” or clockmaker, as well as an inventor and “artiste mécanicien”, which indicates his many-faceted personality and suggests that more remains to be discovered concerning his role in the development of the decorative arts in Europe during the last third of the 18th century.


Jean-Baptiste Petit became a master horologist in Paris in 1781. 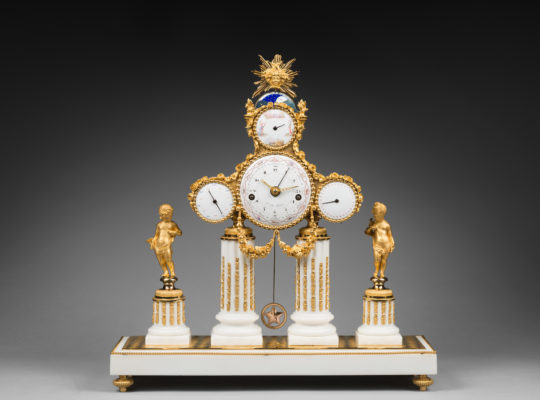 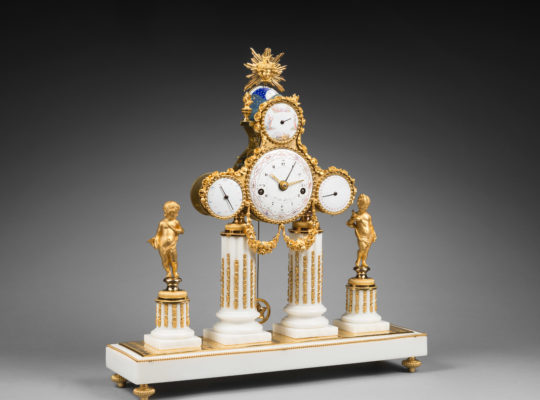 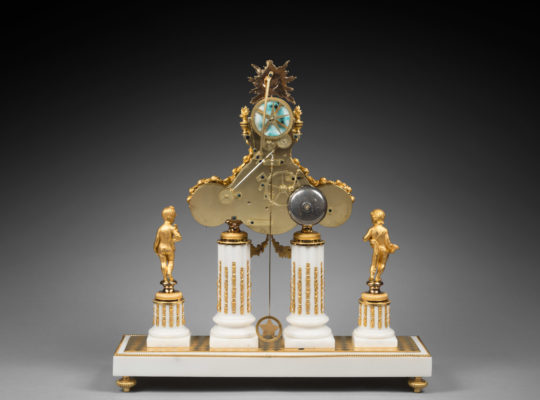 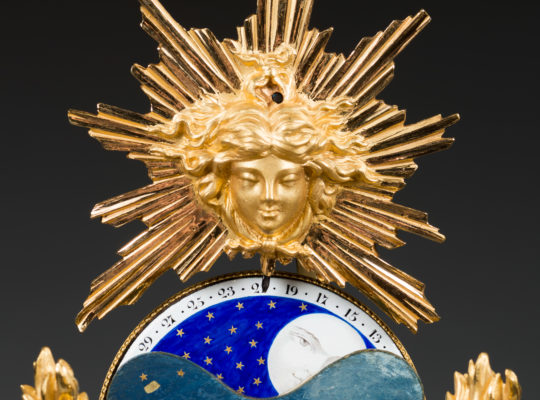 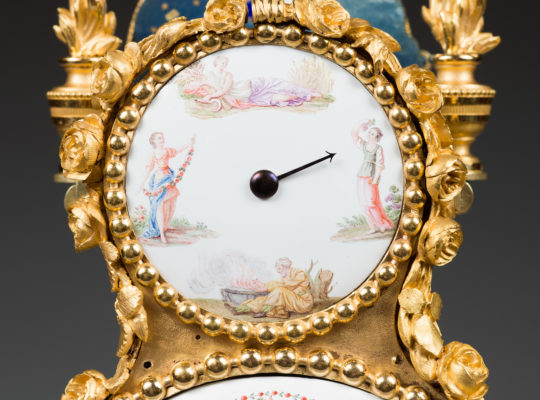 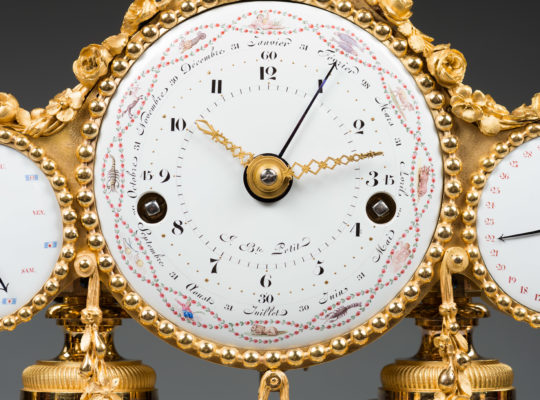 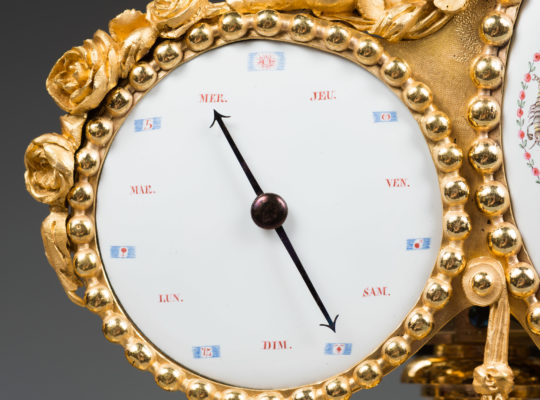 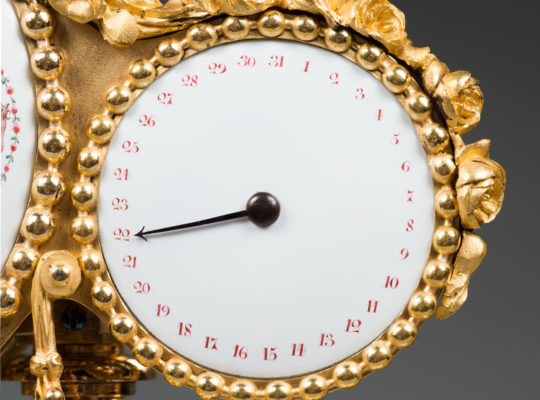 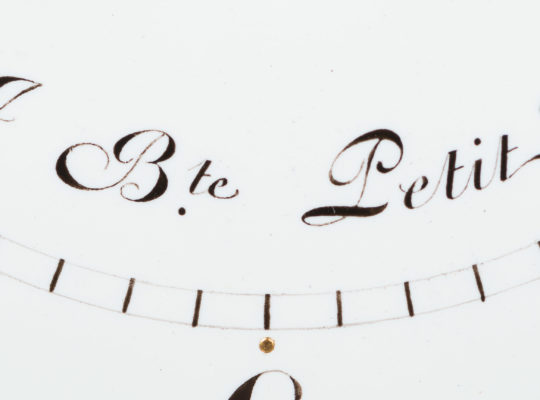 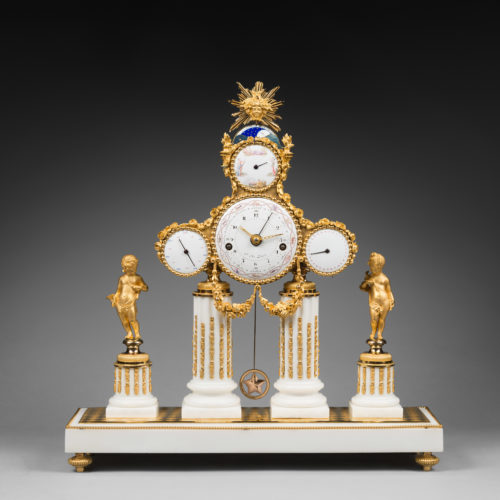