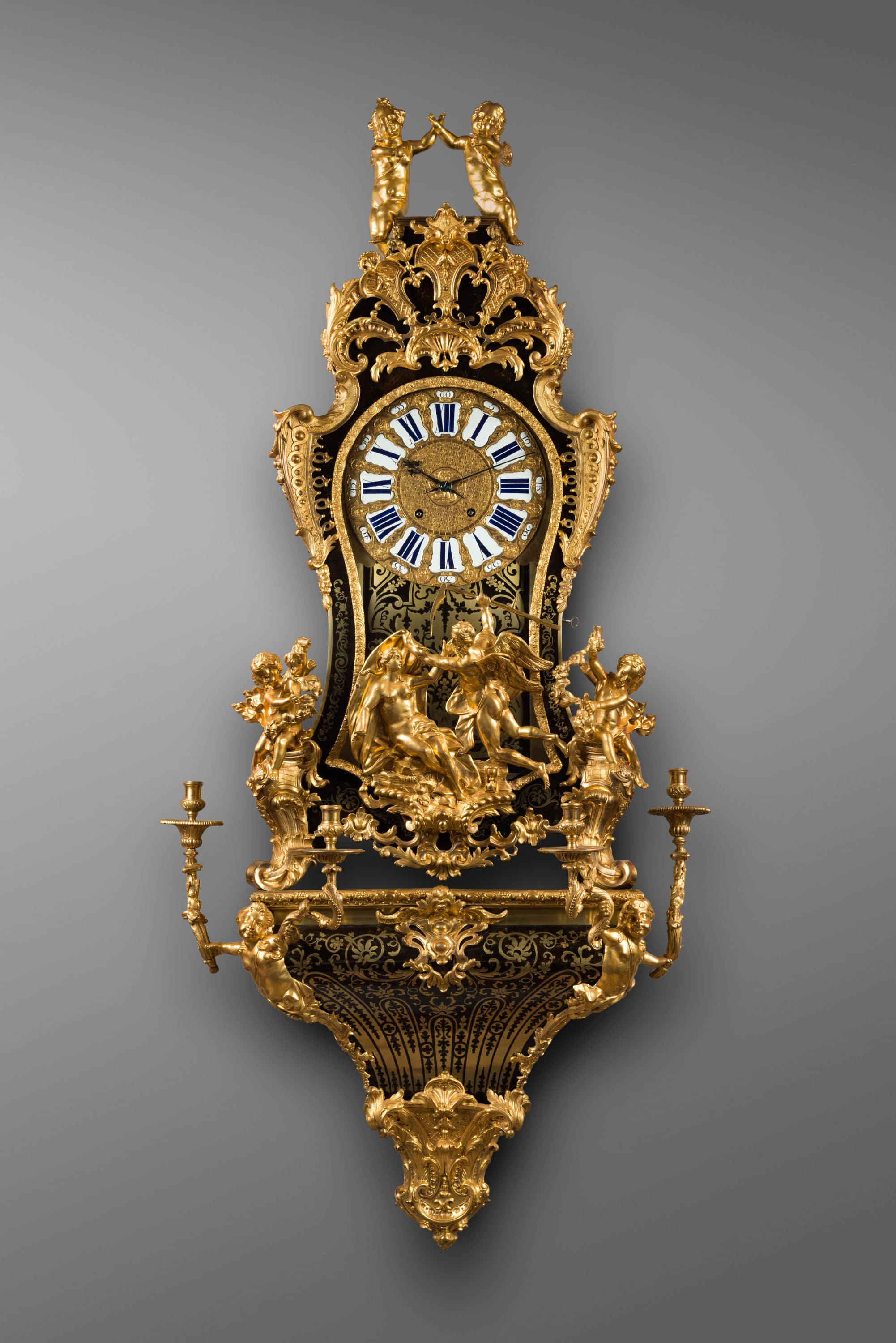 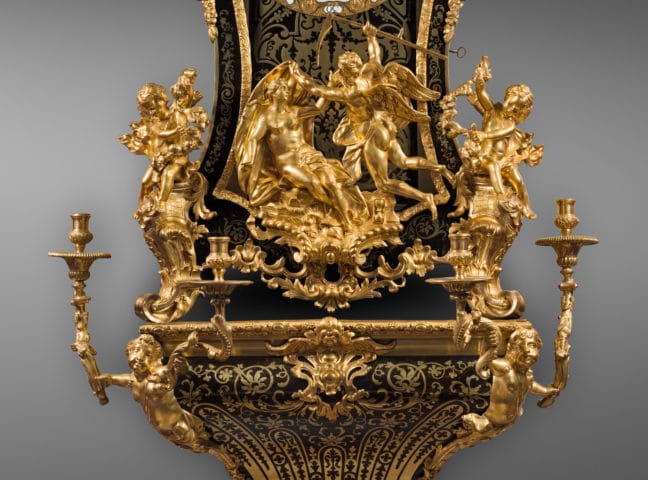 Some of the bronze mounts bearing the “crowned C” punchmark, which marked objects containing copper that were made or sold between 1745 and 1749.

– Probably the piece described in February 1777 as being in the antichamber of banker Georges-Tobie de Thellusson’s mansion in Paris: “An antique clock bearing the name of De Lorme (or Delorme) à Paris with copper dial, enamel hours, in its case with marquetry bracket and iron crémaillère, valued at 120 livres”.

The engraved copper dial with twenty-four enamel cartouches indicates the Roman numeral hours and the Arabic five-minute intervals by means of two polished steel hands. The movement, signed “De Lorme à Paris”, is housed in a waisted case of Boulle “première partie” and “deuxième partie” metal marquetry, in brass and brown-stained tortoiseshell, featuring scroll, foliate, and floral motifs. The clock is elaborately embellished with finely chased gilt bronze mounts, including the winged putti surmounting it, a curved pediment adorned with a wide pierced shell, palmette and flower motifs, C-scrolls, interlace friezes centered with cabochons, leaf-decorated feet with children holding flower and leaf swags, and the façade decorated with an allegorical scene representing Time Unveiling Truth. The bracket is decorated with a cartouche, garlands, and espagnolette figures holding a candleholder with chased drip pan and nozzle in each hand. The lower portion of the bracket features a rococo motif of scrolls and flowers.

The unusual design of this exceptional monumental wall cartel demonstrates the extraordinary skill attained by the finest Parisian artisans of the first third of the 18th century. The precision of the metal marquetry, the very finely chased gilt bronze mounts and the remarkable quality of the casting all suggest it was produced by the finest Parisian artisans. In his article on cabinetmaker Jean-Pierre Latz, Henry Hawley includes several cartels and clocks made by Latz, which are embellished by figures whose sculpture in the round is comparable to the work of contemporary sculptors. It is also interesting to note that Latz often added candelabra to his horological creations, something that was rarely done at the time and further supports our attribution. 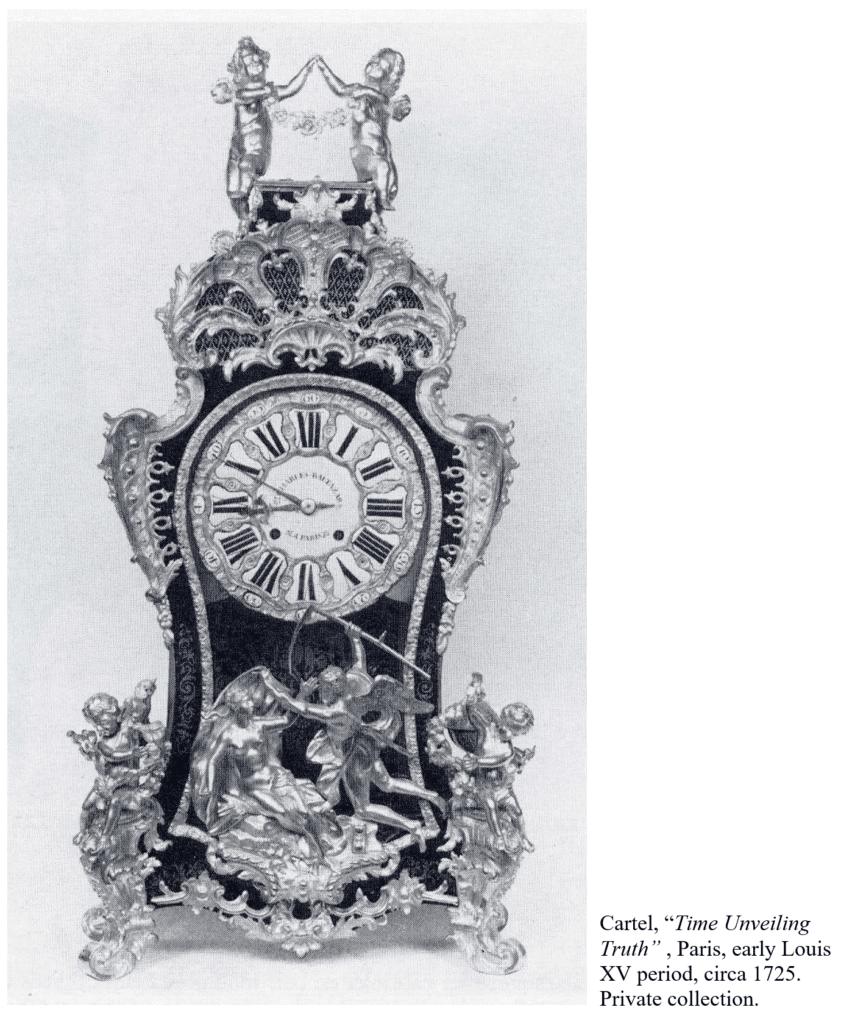 
The signature “De Lorme (or Delorme) à paris” could be that of several clockmakers of that name, active in Paris during the early decades of the 18th century. The most famous among them, Henry-Philippe Delorme (whose name is also spelled “De Lorme”), is mentioned as having a workshop in rue Darnetal in 1718, rue du Bourg l’Abbé in 1740 and rue Greneta from 1746 to 1749. A Juré of the Communauté des horlogers from 1738 to 1742, it seems likely that several clocks mentioned during the 18th century as belonging to important Parisian connoisseurs may be attributed to him, including clocks described in the probate inventory of the widow of Jean Dorigny, formerly officier de la Reine, and in that of the wife of Simon-Charles-Sébastien Bernard de Ballainvilliers, Baron de Ballainvilliers.


Jean-Pierre Latz was one of the most important Parisian cabinetmakers of the reign of Louis XV. Originally from Cologne, he settled in Paris in the late 1710s and married Marie-Madeleine Seignat, the daughter of a building contractor. He quickly gained renown among important Parisian connoisseurs, and within a few years, could boast of a wealthy clientele both in France and abroad. Among his clients were King Frederick II of Prussia, the king of Poland, and Louise-Elizabeth, Duchess of Parma. Despite his great fame, Latz only stamped a small portion of his production, which remains identifiable due to the marquetry and chased gilt bronze mounts, which he obtained from the finest Parisian bronze casters of the day. 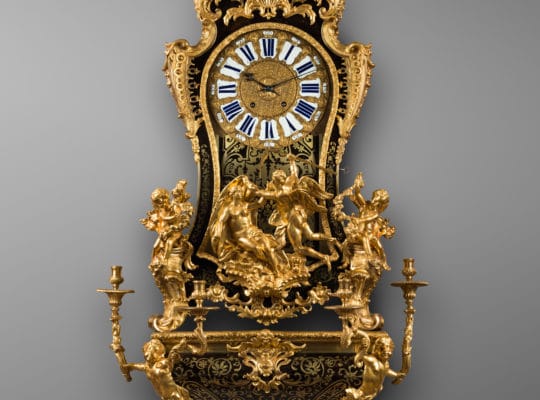 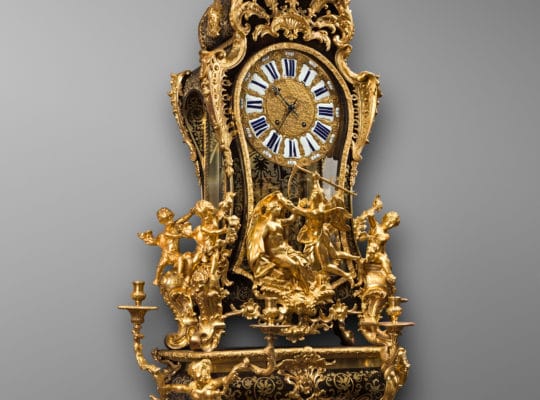 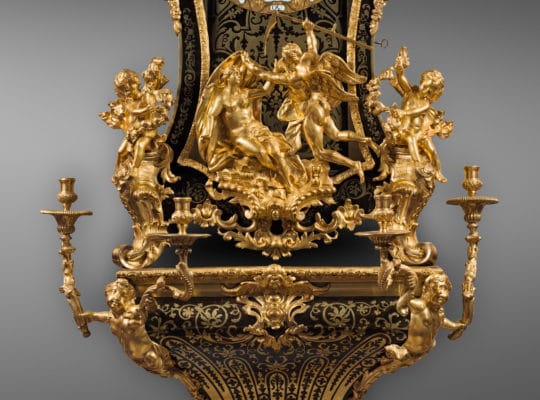 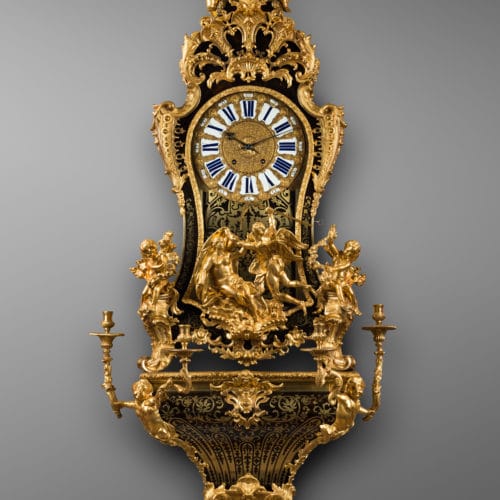