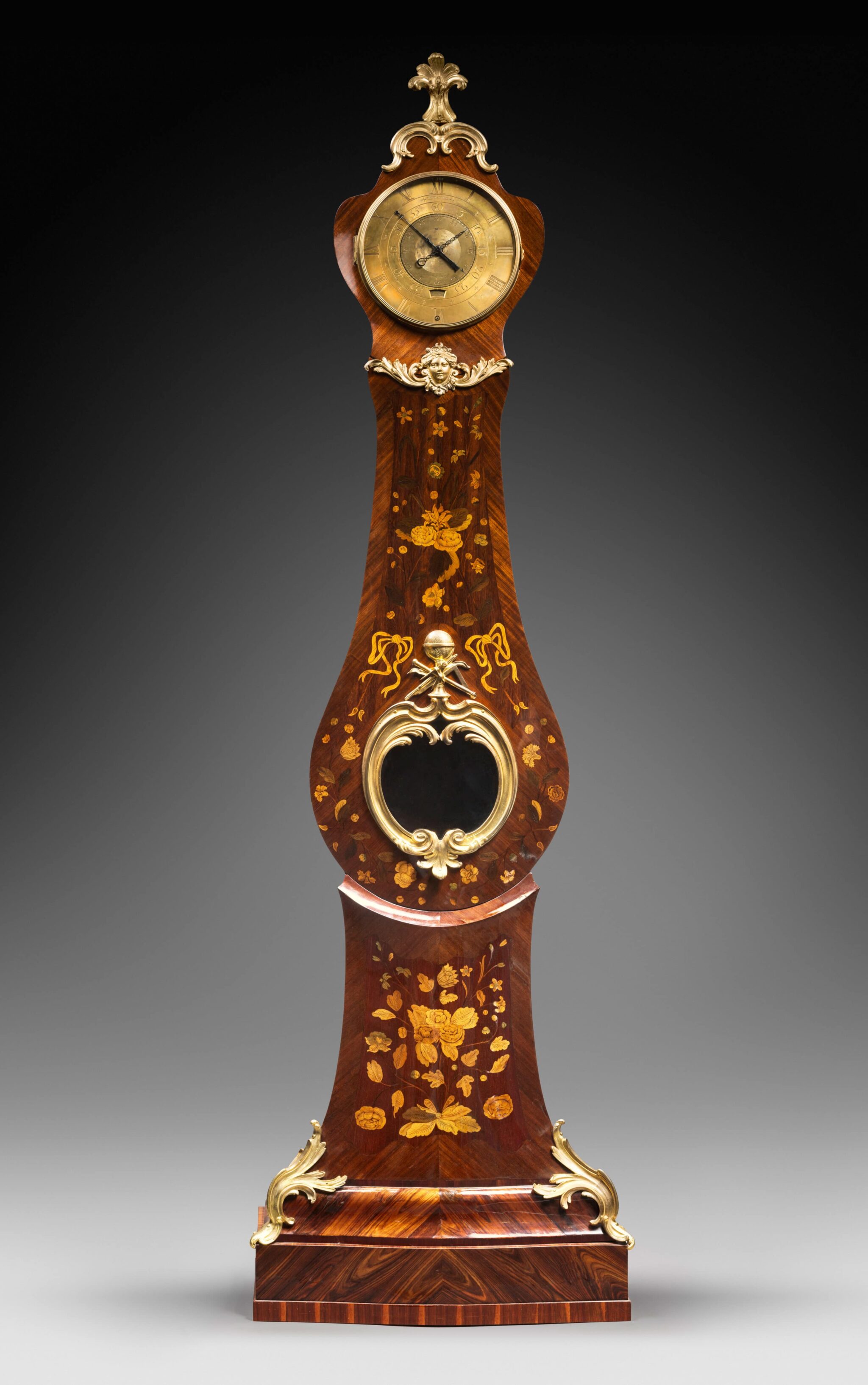 Important Regulator with Sectorial Equation of Time, with a Waisted Floral Marquetry Case 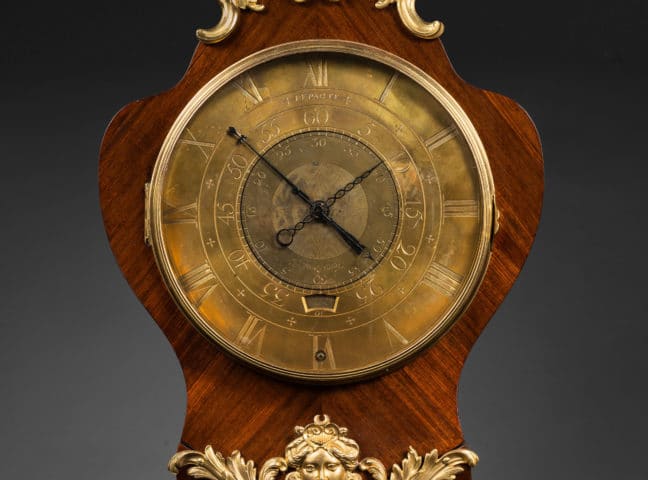 The engraved annular gilt brass dial is signed “Lepaute”; it indicates the Roman numeral hours, the Arabic five-minute intervals, and the seconds by means of three polished and blued steel hands; the annual calendar appears in an aperture. A second guilloche brass dial indicates the equation of time; that is, the difference between solar time (true time) and terrestrial time (mean time). The movement is housed in a waisted case adorned with branches, bouquets of flowers and leaves in colored wood against an amaranth ground, within a satinwood frame. The case rests on a quadrangular base and plinth veneered in kingwood. The façade features a door that reveals the gridiron pendulum. The whole is richly decorated with finely chased gilt bronze mounts. The clock is surmounted by leaf-decorated C-scrolls surmounted by a finial. The case is adorned with a double acanthus leaf motif centered by a mask of Diana crowned by a crescent moon. A glazed circular aperture in the façade is framed by a double C-scroll with volutes and scrolling. It is surmounted by a trophy with the attributes of Geography: a square, a compass, a telescope and a terrestrial globe on a stand. Two wide acanthus leaf scrolls adorn the trapezoidal plinth with curved molding.

The present regulator’s unusual design is an example of the collaboration between several of the finest Parisian artisans, the Lepautes, clockmakers, and the cabinetmaker Nicolas Petit, to whom we attribute the case of the present clock. Petit is one of the most extraordinary cabinetmakers of the second half of the 18th century. At the time, most Parisian furniture makers produced only “ordinary” pieces such as writing desks, bookcases, tables, pedestal tables, wardrobes and chests of drawers. The work of Nicolas Petit demonstrates his great talent in marquetry. Alongside his ordinary production, the cabinetmaker also created regulator cases for movements and dials made by the great clockmakers of the time. He became an expert in waisted, lyre form and neoclassical cases, attaining such a degree of perfection that within just a few years he became the principal collaborator of the most important Parisian clockmakers of the day, especially the Lepaute.

The present example is characteristic of the early years of the decades-long collaboration between these artisans. Its elegant shape, the quality of the veneers – which were carefully chosen by the cabinetmaker – and the perfection of the horological mechanism, make it one of the finest examples of the early years of the collaboration between Lepaute and Petit. Today, we know of only a few similar regulators that are stamped with the cabinetmaker’s name or attributed to him; they feature differences in the marquetry and the treatment of the gilt bronze mounts. Among these, three models with latticework marquetry must be mentioned: the first, with a dial signed Ferdinand Berthoud, is in the Tieger collection in Milan (see the exhibition catalogue Ferdinand Berthoud 1727-1807, Horloger mécanicien du Roi et de la Marine, Musée international d’Horlogerie, La Chaux-de-Fonds, 1984, p. 248, fig. 121). The second, stamped Petit, is illustrated in P. Siguret, Le style Louis XV, Fribourg, 1965, p. 122. The third is in the Hungarian Museum of Decorative Arts in Budapest (illustrated in H. Szabolcsi, Meubles français en Hongrie, 1964, fig. 19). Two further models are in veneered wood: the first, in rosewood and amaranth wood, is shown in P. Kjellberg, Encyclopédie de la pendule française du Moyen Age à nos jours, Les éditions de l’Amateur, Paris, 1997, p. 303; the second, whose enamel dial is signed “Lepaute”, was studied in a monograph devoted to Petit (see A. Droguet, Nicolas Petit 1732-1791, Les éditions de l’Amateur, Paris, 2001, p. 69). One further piece, with elaborate floral marquetry against a rosewood ground, is illustrated in P. Heuer and K. Maurice, European Pendulum Clocks, Decorative Instruments of Measuring Time, Schiffer Publishing, 1988, p. 107, fig. 191.


This is the signature of the brothers Jean-André Lepaute (1720-1789) and Jean-Baptiste Lepaute (1727-1802), remarkable clockmakers born in Thonne-la-Long in Lorraine who were both horlogers du Roi.

Jean-André came to Paris as a young man and was joined by his brother in 1747. The Lepaute enterprise, founded informally in 1750, was formally incorporated in 1758. Jean-André, who was received as a maître by the corporation des horlogers in 1759, was lodged first in the Palais du Luxembourg and then, in 1756, in the Galeries du Louvre. Jean-André Lepaute wrote a horological treatise (Traité d’Horlogerie), published in Paris in 1755. Another volume, entitled Description de plusieurs ouvrages d’horlogerie (A Description of several horological pieces) appeared in 1764. In 1748 he married the mathematician and astronomer Nicole-Reine Etable de la Brière, who among other things predicted the return of Halley’s Comet.

Jean-Baptiste Lepaute, received maître in December 1776, was known for the equation of time clock he constructed for the Paris Hôtel de Ville (1780, destroyed in the fire of 1871) and the clock of the Hôtel des Invalides.

The two brothers worked for the French Garde-Meuble de la Couronne; their clocks were appreciated by the most important connoisseurs of the time, both in France and abroad, such as the Prince Charles de Lorraine and the Queen Louise-Ulrika of Sweden.

Jean-Baptiste took over the workshop when Jean-André retired in 1775.


Nicolas Petit is one of the most important Parisian furniture makers of the second half of the 18th century. After becoming a master in January 1761, he opened a workshop at the sign of  “The Name of Jesus” in the Faubourg Saint-Antoine quarter. He quickly gained renown. Over the course of approximately thirty years, he made many pieces of furniture, always attempting to follow changing tastes and fashions and to satisfy his clientele, which included members of the aristocracy and well-known collectors, such as President Tascher and the Duke d’Orléans, the Duke d’Harcourt and the Duke de Bouillon. Today, his furniture is in public collections around the world, including the Musée des Arts décoratifs in Lyon, the Musée Lorrain in Nancy, the Musée des Arts décoratifs, the Musée des Arts et Métiers and the Musée Carnavalet in Paris, the Musée Lambinet in Versailles, the Wallace Collection in London, the James de Rothschild collection in Waddesdon Manor and the Musée Calouste Gulbenkian in Lisbon. 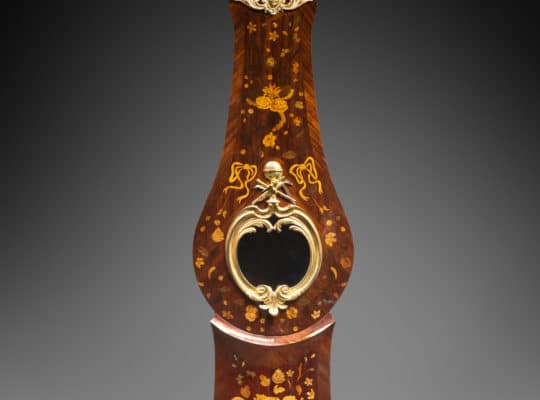 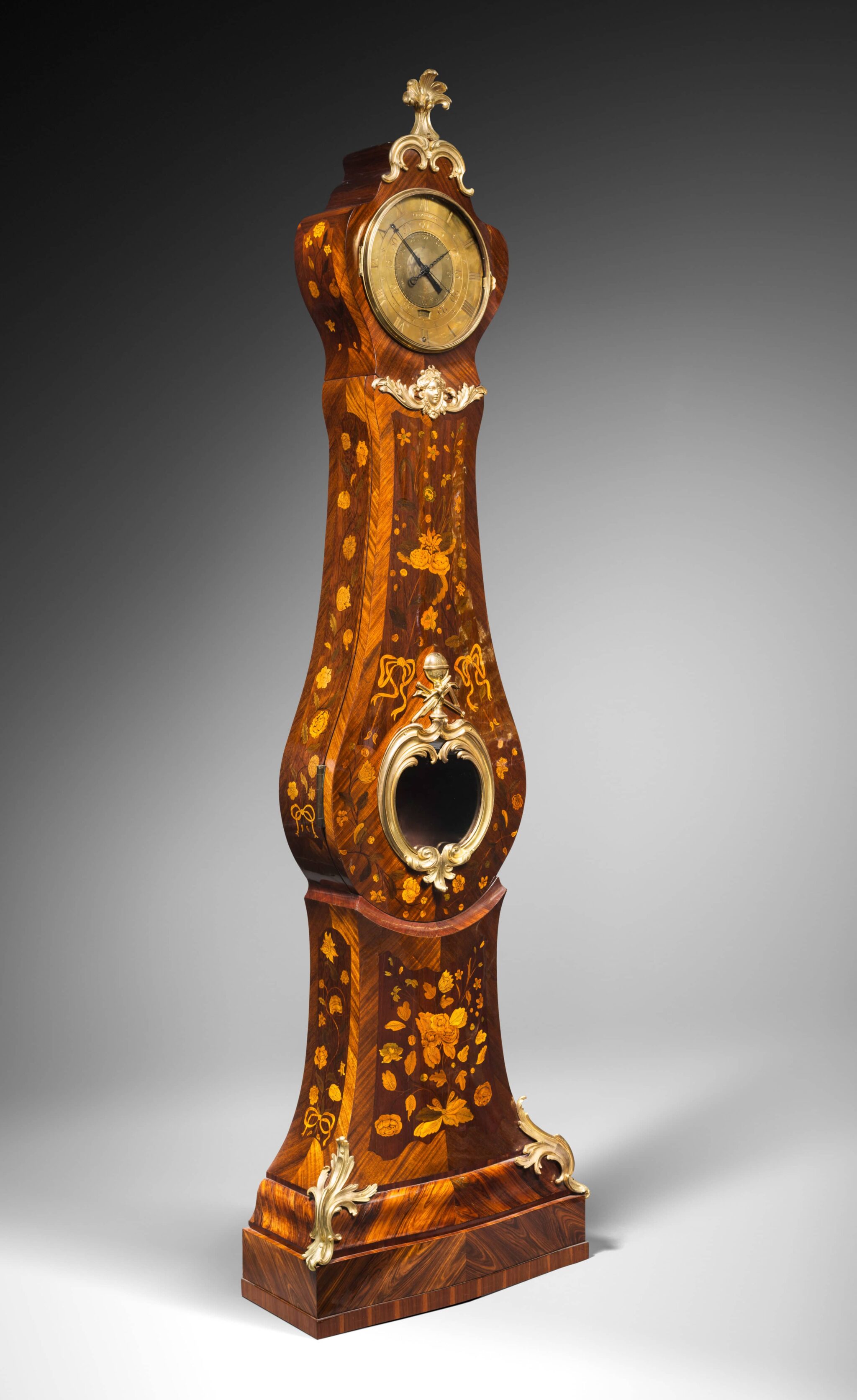 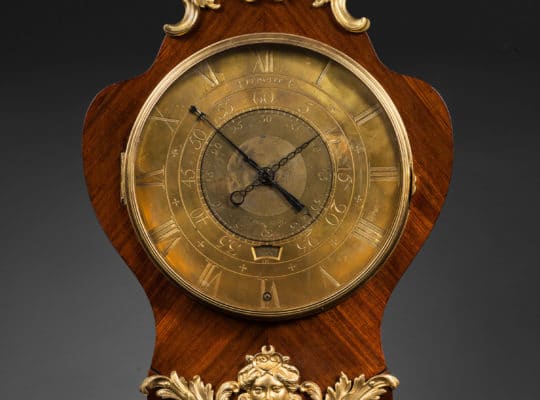