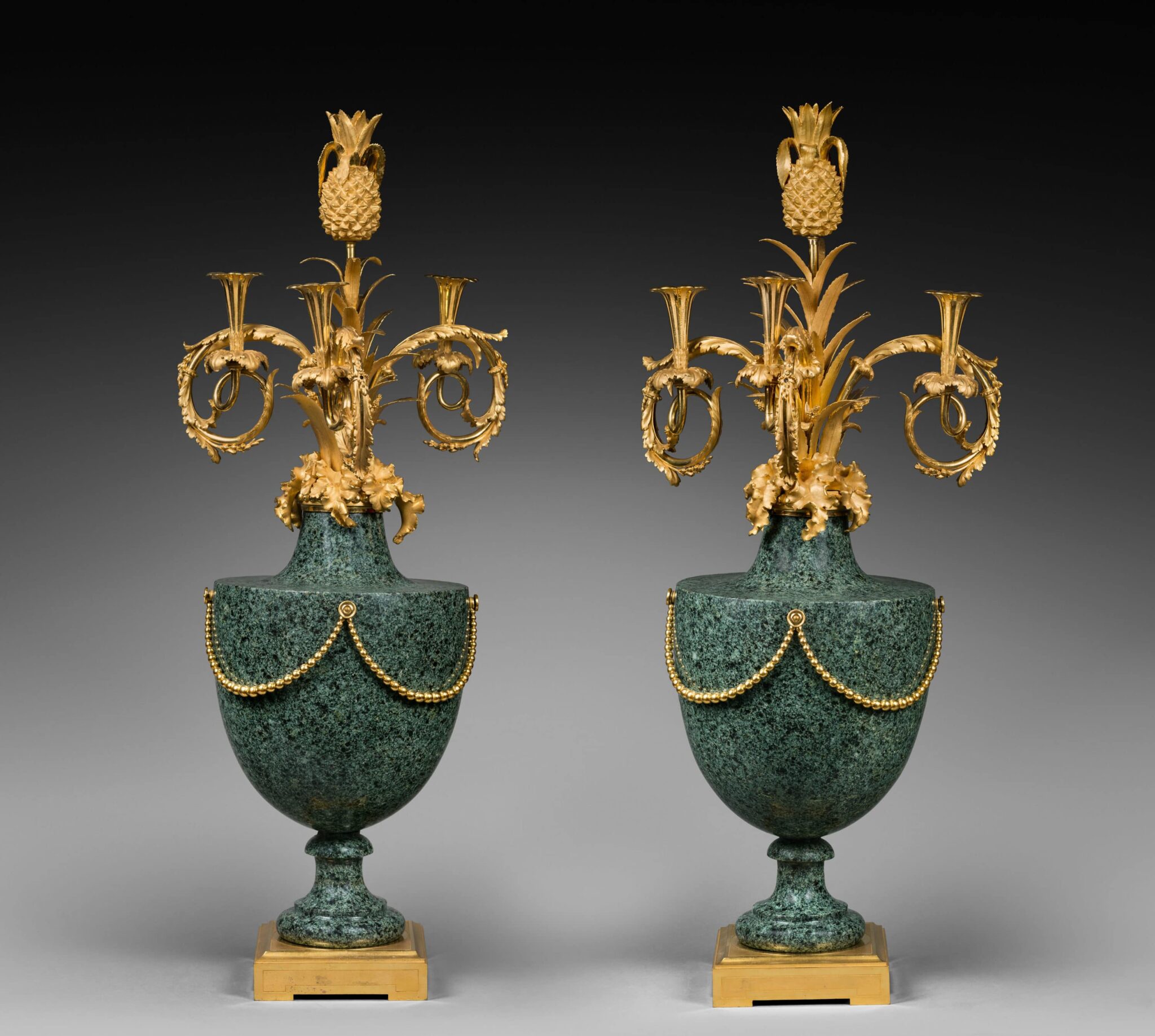 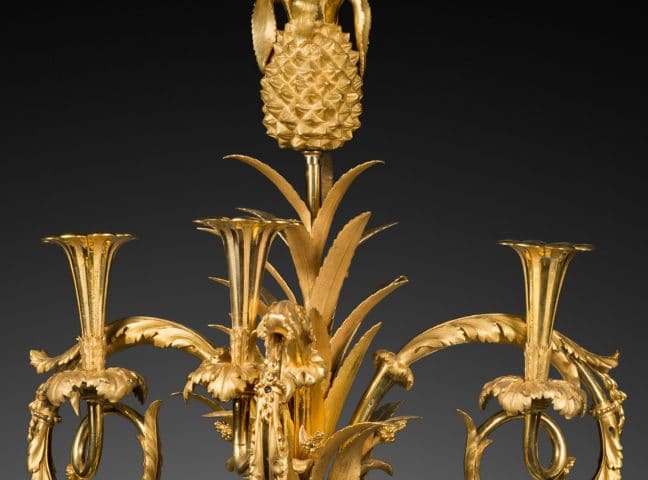 – Formerly in the collection of the fermier général Laurent Grimod de la Reynière (1734-1793); it stood in the “central lighted Salon looking out onto the terrace” of his Parisian mansion in the rue Boissy-d’Anglas, which was built in 1775 by the architect Jean-Benoît-Vincent Barré.

The present truncated oval-form vases are made from a block of sculpted and polished green Vosges granite. Each vase features a neck and a molded pedestal adorned with a plain ring and torus; each is elaborately decorated with finely chased and gilt bronze mounts with matte and burnished finishing. The bellies of the vases are adorned with swags of graduated beads suspended from roundels. The light branches issue from bouquets of stiff pineapple leaves from which emerge stems bearing curved leaves, which terminate in pineapple fruits that serve as drip pans. From the base of these stems issue three further arabesque-form branches that are embellished with acanthus leaves and seeds, and beaded rings that terminate in corollas supporting the nozzles and drip pans. The quadrangular bases, with concave molding, stand on square plinths that are adorned with reserves set against matted grounds.

The present candelabra vases bear witness to the fashion for exoticism that reigned among contemporary Parisian collectors, and rank among the most remarkable examples of the Parisian decorative arts during the second half of the 18th century. Several factors, including their remarkable design, the exceptional quality of their chasing and gilding, and the high rank of their commissioner and owner, combine to make them highly desirable works of art. They are also noteworthy for the glimpse they afford into the special relationship that existed between influential Parisian collectors and the exceptional artisans who supplied them with fine objets d’art. In the present case, the artisan is Pierre Gouthière, to whom we attribute the vases. Commissioned during the reign of Louis XVI by the fermier général Laurent Grimod de la Reynière, one of the most important collectors of his time, they stand out due to their near unique status, for only one other identical pair of candelabra vases is known to exist; it was also commissioned by Grimod de la Reynière. The fact that only two such pairs of vases were produced during the 18th century, and that both belonged to Grimod de la Reynière, sheds light on a type of creative process that very rarely seen in the bronze furnishings of the period: works produced to order. That practice, which guaranteed the uniqueness of the works made, led to much higher production costs. It required the execution of preparatory drawings, which were then validated by the client. Afterwards, models were made, usually of wood or wax, molds were created for casting the various bronze parts, and lastly, the agreement between the artisan who was making the piece and the client who was commissioning it, was finalized, thus insuring the commissioner of the privilege of receiving a masterpiece that no one else could boast of owning.

Thus, we discovered the provenance of the two pairs of candelabra vases – they belonged to fermier general Grimod de la Reynière. That provenance was further supported by the study of the probate inventory of Grimod de la Reynière, which was drawn up in his Parisian mansion beginning on the 22 germinal of the year IV of the Republic (11 April 1796). 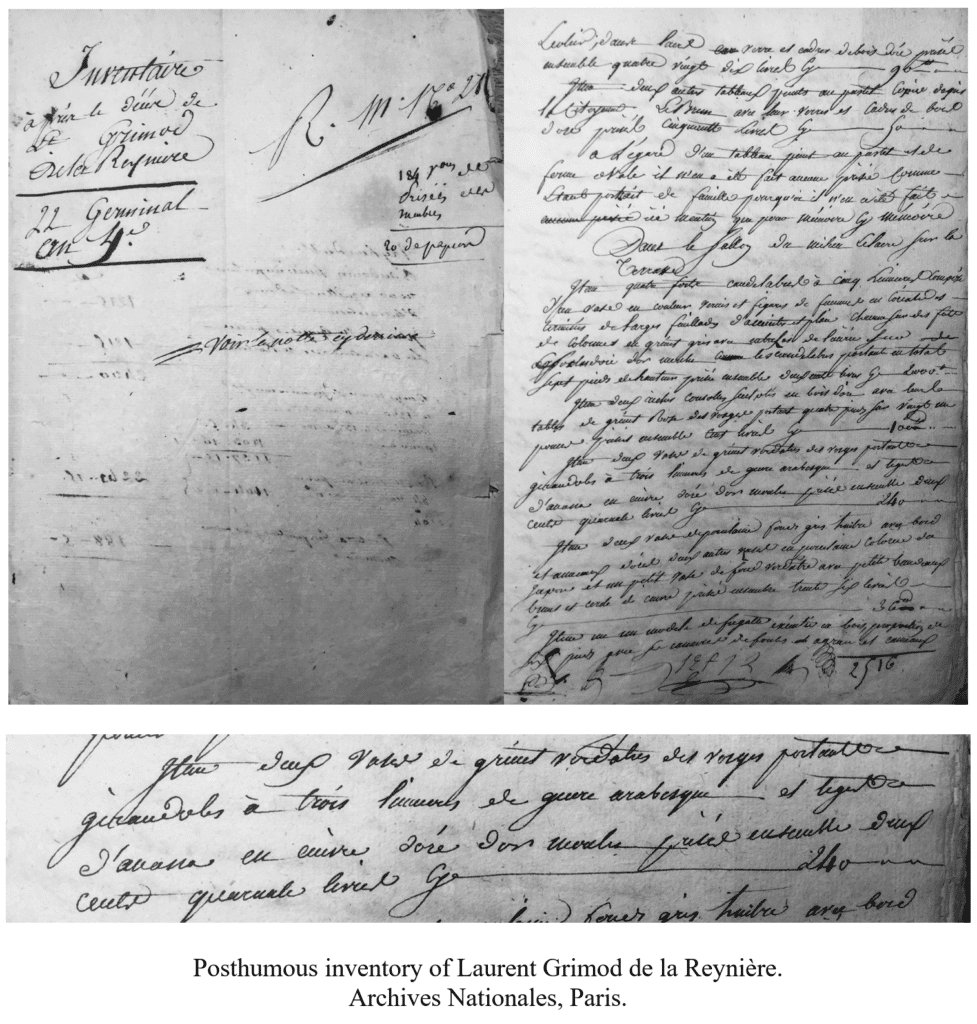 Indeed, right after the inventory describing the more common pieces contained in the mansion, including the “ordinary” pieces of furniture, another list was drawn up to describe the most luxurious and costly pieces.

“Here follows the inventory of the paintings, precious pieces of furniture, marble statues and vases, tables, columns made of porphyry and granite, vases and other porcelain objects, snuffboxes, rings, and precious jewelry, curious objects made of agate, lapis, and other materials, single engravings and volumes of engravings, and other art objects and curiosities of all sorts. They will be examined and their value estimated by the said citizens Baudouin and Boileau, following the advice of the citizens Alexandre Joseph Paillet, a painter living in Clichy La Garenne near Paris and André Coquille, a merchant living in Paris rue and section of the Butte des Moulin, who were present in order to give their opinions in good conscience”.

“In the central, lighted Salon overlooking the Terrace” the objects described were as follows:

Further on in the inventory, “In the apartment occupied by the Citizen widow Grimod on the ground floor, to the left of the main building”:

And described “In a lighted Salon de compagnie looking out onto the garden, making up the first room of said apartment”:

“Item one fireplace grate made up of two parts, in polished iron, adorned with two lions on the front, on small bases, made in chased and gilt copper, shovel, tongs, and iron pincers with copper handles, a pair of girandoles made up of robust vases in gray Vosges granite, fitted with three arabesque branches, bearing three drip pans and a fourth branch on a pineapple, all made of chased and gilt copper, valued together at three hundred sixty livres 360”. That text refers to the second known example of this model. 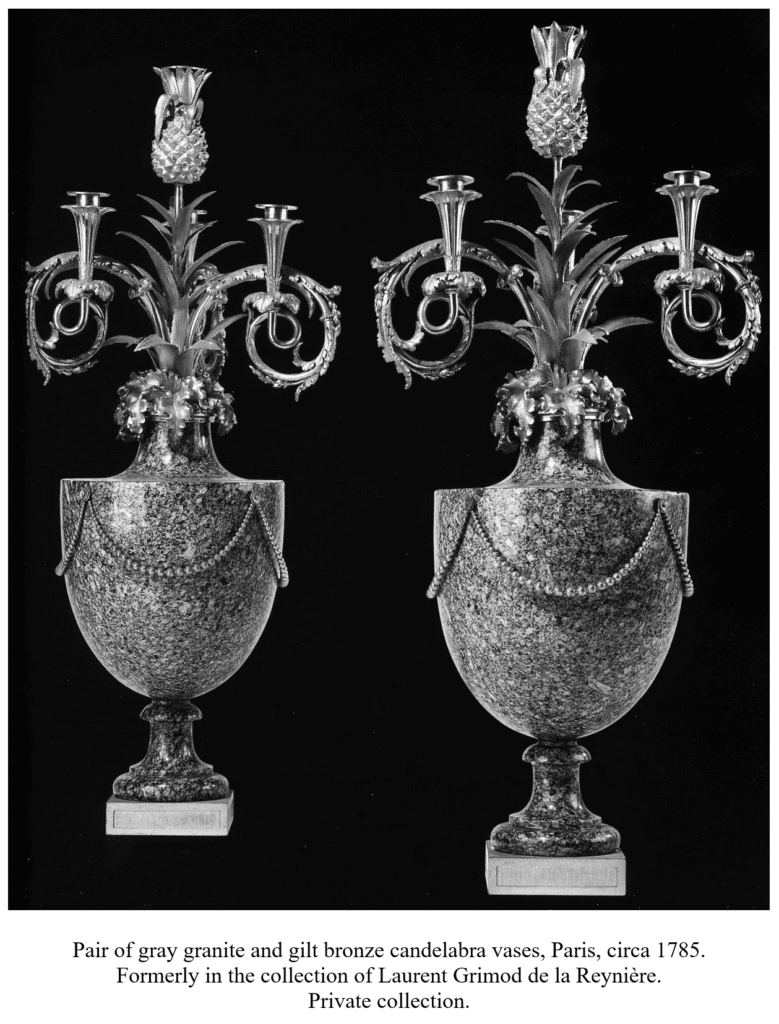 Although after that date we lose track of the vases, the second pair, made of gray granite, is better documented. Slightly more than a year after the probate inventory, an auction of the former collections of the fermier général was held in Paris. The number 142 was described as follows: “A pair of mantel girandoles, with three arabesque branches, with stem and pineapple leaves in the upper portion; all in chased and matte gilt copper: they are set in vases made of gray Vosges granite, in the form of truncated ovals, with necks and pedestals. Height 30 pouces”; that is the description of the candelabra that stood in the home of the collector’s widow. Some twenty years later, on April 27, 1818, those candelabra were again offered at auction, at a sale organized by the Parisian merchant Nicolas Lerouge: “94. Two vases in gray Vosges granite, with three-branch girandoles, which are surmounted by  pineapples, very elaborately chased and remarkably gilt”. They were recently offered on the Paris art market when five masterpieces from the Qizilbash collection were sold (Christie’s, Paris, December 19, 2007, lot 804). 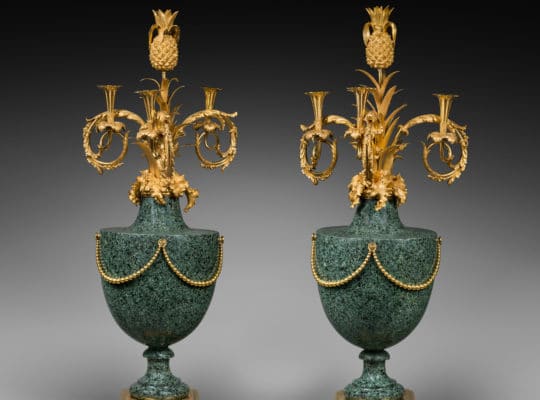 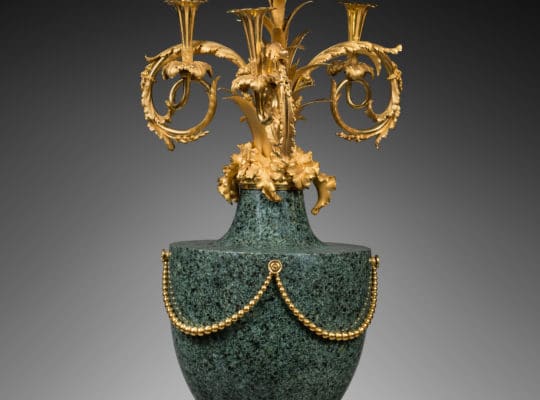 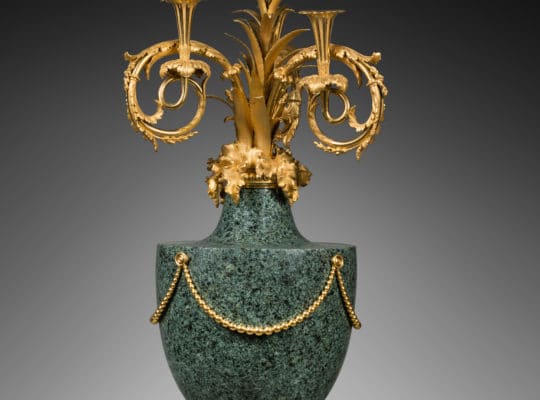 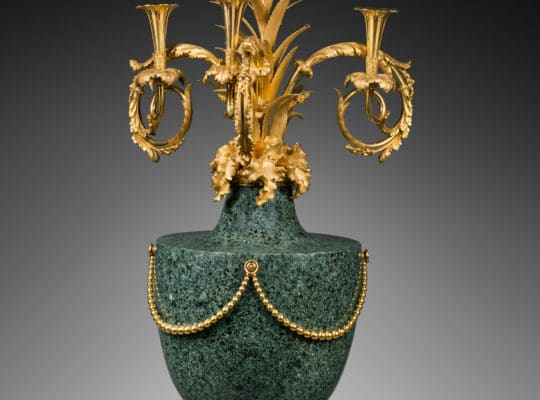 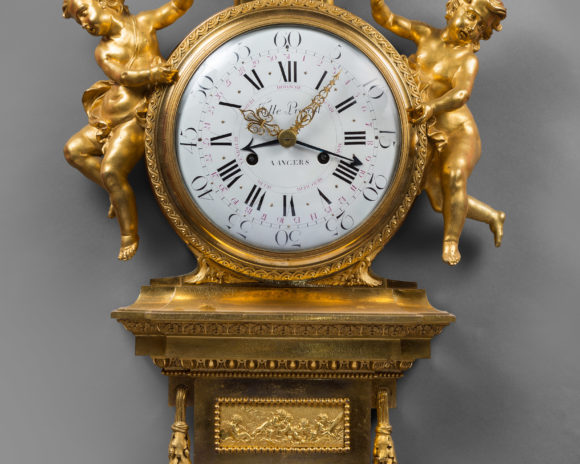 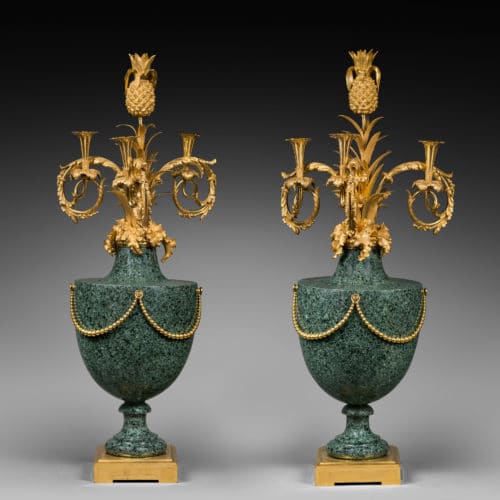