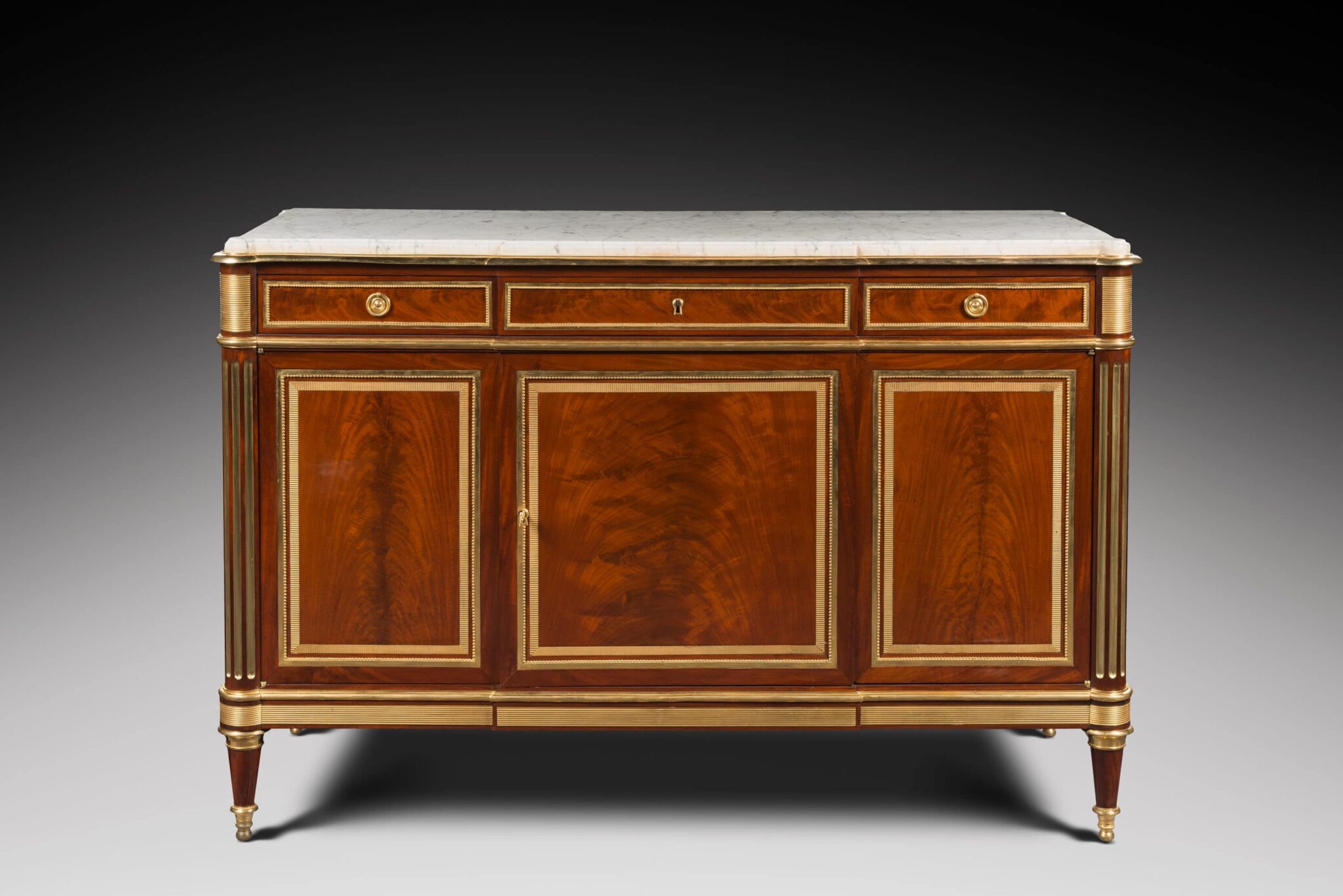 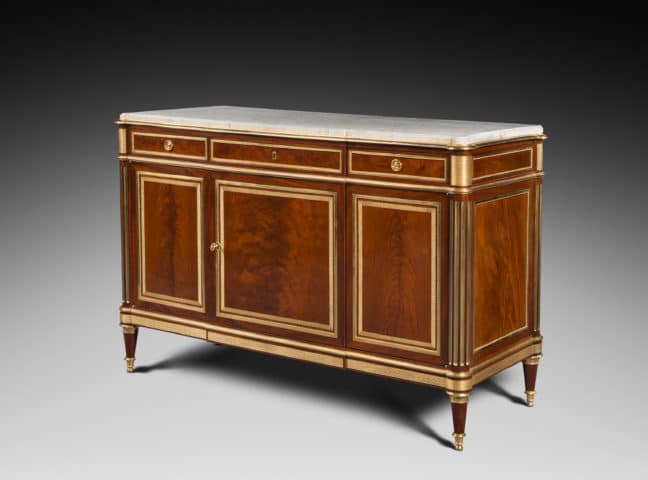 The present commode, made of magnificent flame-mahogany veneered mahogany, with a three-part façade and projecting central panel, displays exceptionally clean lines and an architectural design. Rectangular in shape, it has two door leaves, one of which is hinged and double, and opens to reveal three wide drawers with crossbars fitted with rings. It also features three frieze drawers, the central one closing by means of a clover lock. The side drawers are fitted with mascarons and rings; the lateral fluted columns are inlaid with brass. The commode is adorned with chased gilt brass mounts, including plain gilt bronze bands decorated with beading, molding and a mille-raie frieze. It stands on four tapering, rounded feet with molded capitals and bases, and has a gray-veined white marble top.

This type of mahogany commode with a three-part façade was immensely successful among important Parisian connoisseurs of the latter part of the 18th century. Godefroy Dester made several similar examples, no doubt at the request of renowned marchand-merciers such as Dominique Daguerre, all of which display perfectly balanced proportions, an exacting choice of mahogany veneering that was carefully selected by the cabinetmaker, and the clean, pure lines that characterize the finest pieces of furniture from the mid-1780s. 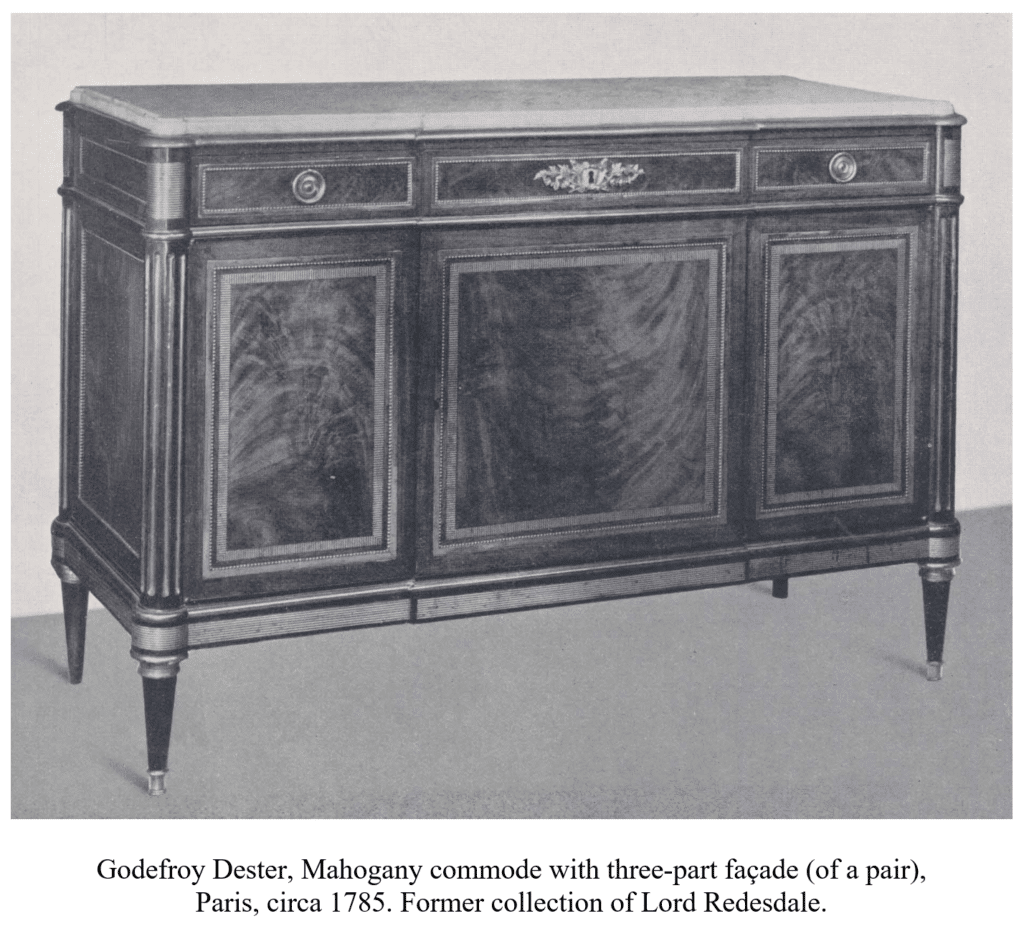 Today only a few comparable commodes by Dester are known. Among them, one example is pictured in A. Pradère, French Furniture Makers, The Art of the Ebenistes from Louis XIV to the Revolution, 1989. A second example is illustrated in J. Nicolay, L’art et la manière des maîtres ébénistes français au XVIIIe siècle, Paris, 1982. A pair of similar commodes by Dester formerly belonged to Lord Redesdale (sold Christie’s, Monaco, June 20, 1992, lot 67).


Godefroy Dester (d. December 24, 1805) was one of the most important Parisian cabinetmakers of the last quarter of the 18th century. After becoming a maître in July 1774, he opened a workshop in the rue du Faubourg Saint-Antoine and soon gained fame and renown. He mostly produced pieces of furniture decorated with marquetry or with high-quality mahogany veneer. However, he is also known to have supplied, through the intermediary of the mirror merchant Delaroue, a magnificent pair of commodes decorated with Paris porcelain plaques that were intended for the bedchamber of the Count d’Artois – the brother of Louis XVI – in the Palais du Temple (see P. Kjellberg, Le mobilier français du XVIIIe siècle, Dictionnaire des ébénistes et des menuisiers, Paris, 2002, p. 297). 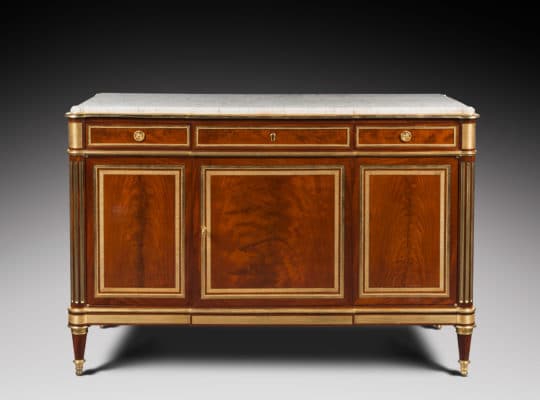 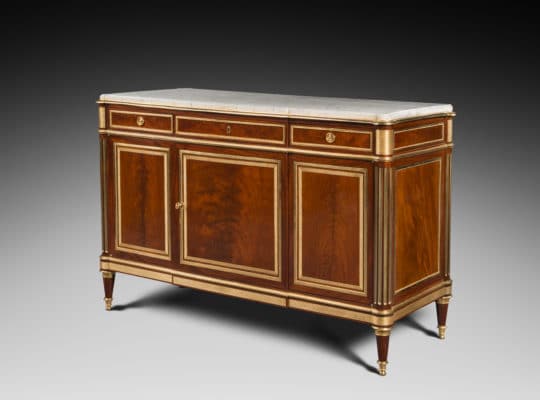 Write us
Call us
Print
Share
In the same category
Dester 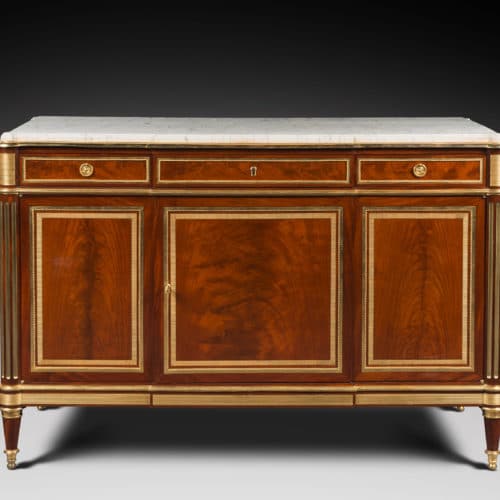