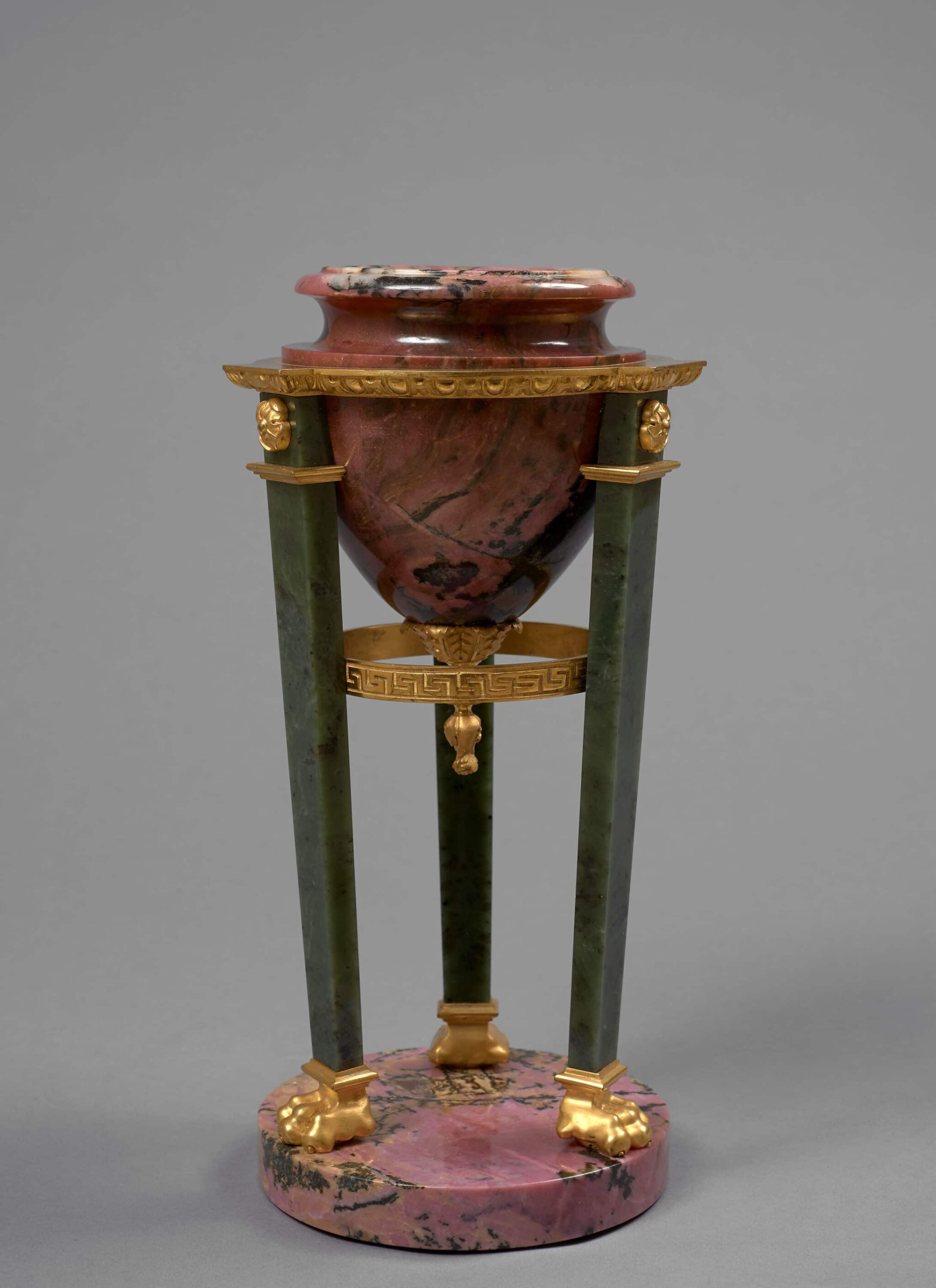 Exceptional Neoclassical Tazza in Rhodonite and Nephrite, with chased and gilt bronze mounts 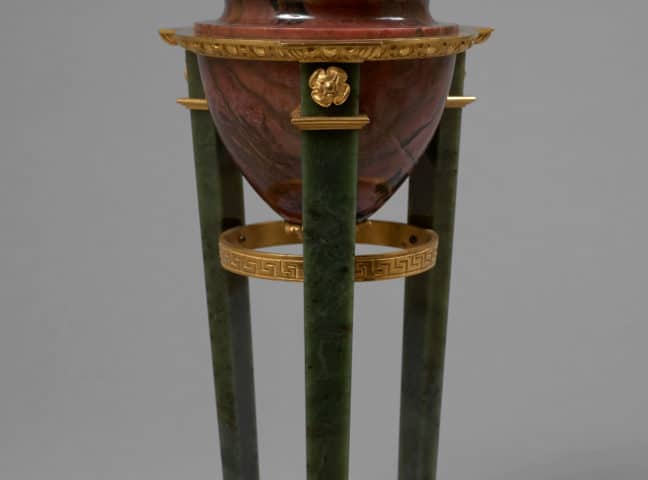 After a drawing by Ivan Hallberg

This Tazza, in the form of an antique athénienne tripod stand, is of an exceptionally complex and elegant design. Three Nephrite pilaster legs topped by capitals, with chased and gilt bronze moulding to their bases, are linked by a ring decorated with a Greek key frieze; adorned with rosettes, they stand on lion paw feet. They support an oval Rhodonite urn with egg and dart moulding that terminates in a gadrooned leaf finial. The round base is made of Rhodonite. The stonework is extremely well carved and polished.

This exceptional objet d’art demonstrates the exceptional skill of the Russian artisans of the early 19th century, who produced extraordinary art objects using various motifs and materials. Its antique-inspired design is reminiscent of that of the bronze tripod stands discovered in the excavations of the ancient Roman cities of Pompeii and Herculaneum near Naples as of the mid 18th century. Engravings illustrating these tripod stands were a great source of inspiration to European artists and artisans. The Russian lapidary who made this piece created its elegant design using blocks of two types of Russian hardstone, Rhodonite and Nephrite, carefully selected for their rarity and subtle colouring. The Russian stone quarries were fabulously rich; the Kolyvan quarry, in particular, yielded the stone used to produce hardstone objects destined to decorate the Russian Imperial palaces. Today many objects and decorative ensembles preserved in the former residences of the Tsars bear witness to this great opulence. 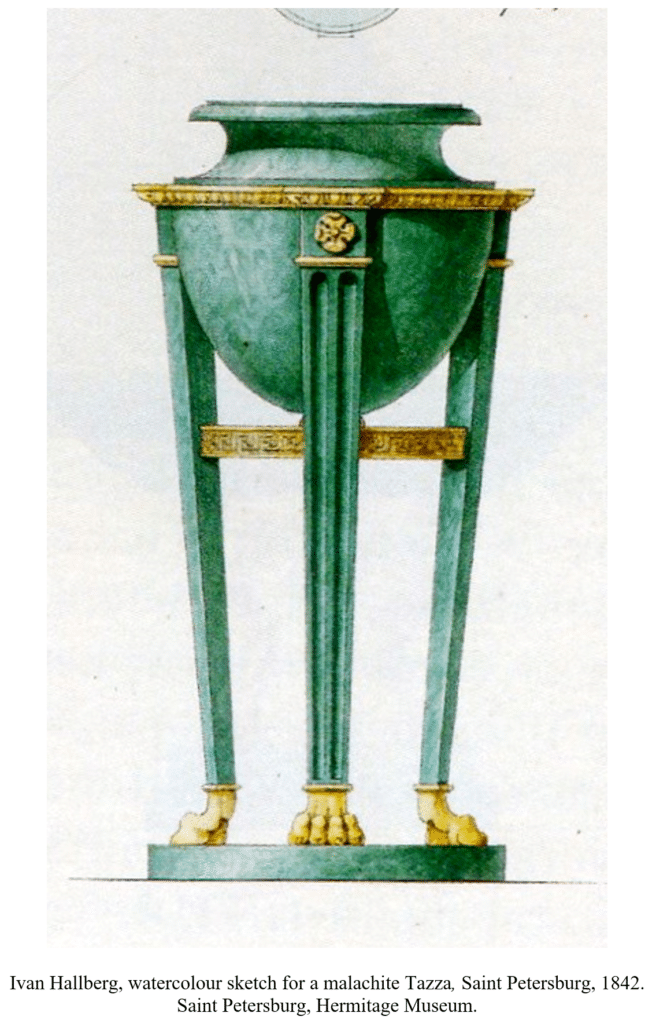 This Tazza model was greatly appreciated by the important Russian collectors of the time, however before the mid 1850’s it was rarely produced with several types of marble or hardstone, nor did it tend to be offered in different sizes. One of the most unusual features of this Tazza is that the original preparatory drawing is recorded as having been registered by architect Ivan Hallberg on October 17, 1842. That drawing was to be used for a larger model in malachite, produced in the lapidary workshops of Ekaterinburg and fitted with its chased gilt bronze mounts by the Chopin foundry in Saint Petersburg. That particular malachite-veneered Tazza was delivered to the Winter Palace in 1845. It apparently pleased the Tsar, for another identical piece was ordered at once. That pair of Tazza later decorated the apartments of Empress Alexandra Feodorovna. Today, one of the pair is in the Hermitage Museum in Saint Petersburg (illustrated in N. Mavrodina, The State Hermitage Museum, The Art of Russian Stone Carvers 18th-19th Centuries, The Catalogue of the Collection, Saint Petersburg, 2007, p. 251). 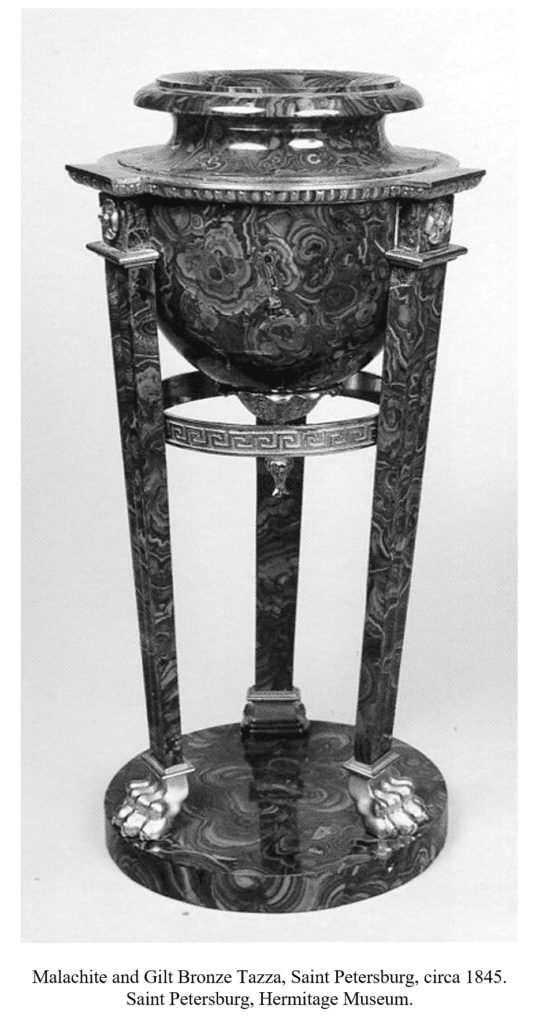 
Ivan Hallberg was an architect and ornamentist of the Tsar. 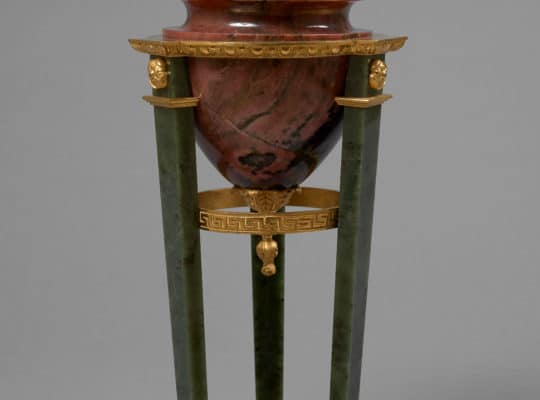 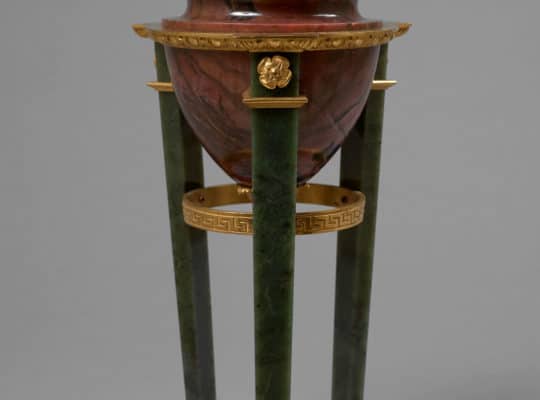 Write us
Call us
Print
Share
In the same category
Hallberg 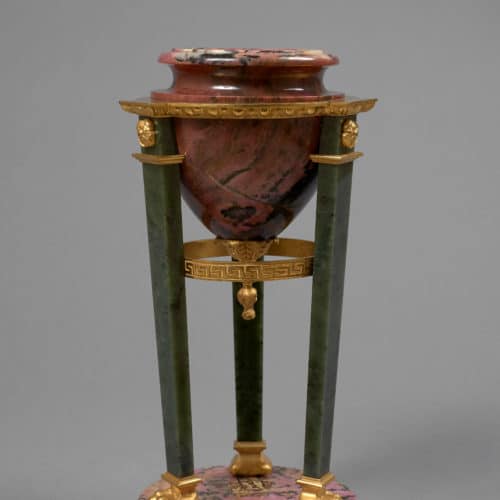