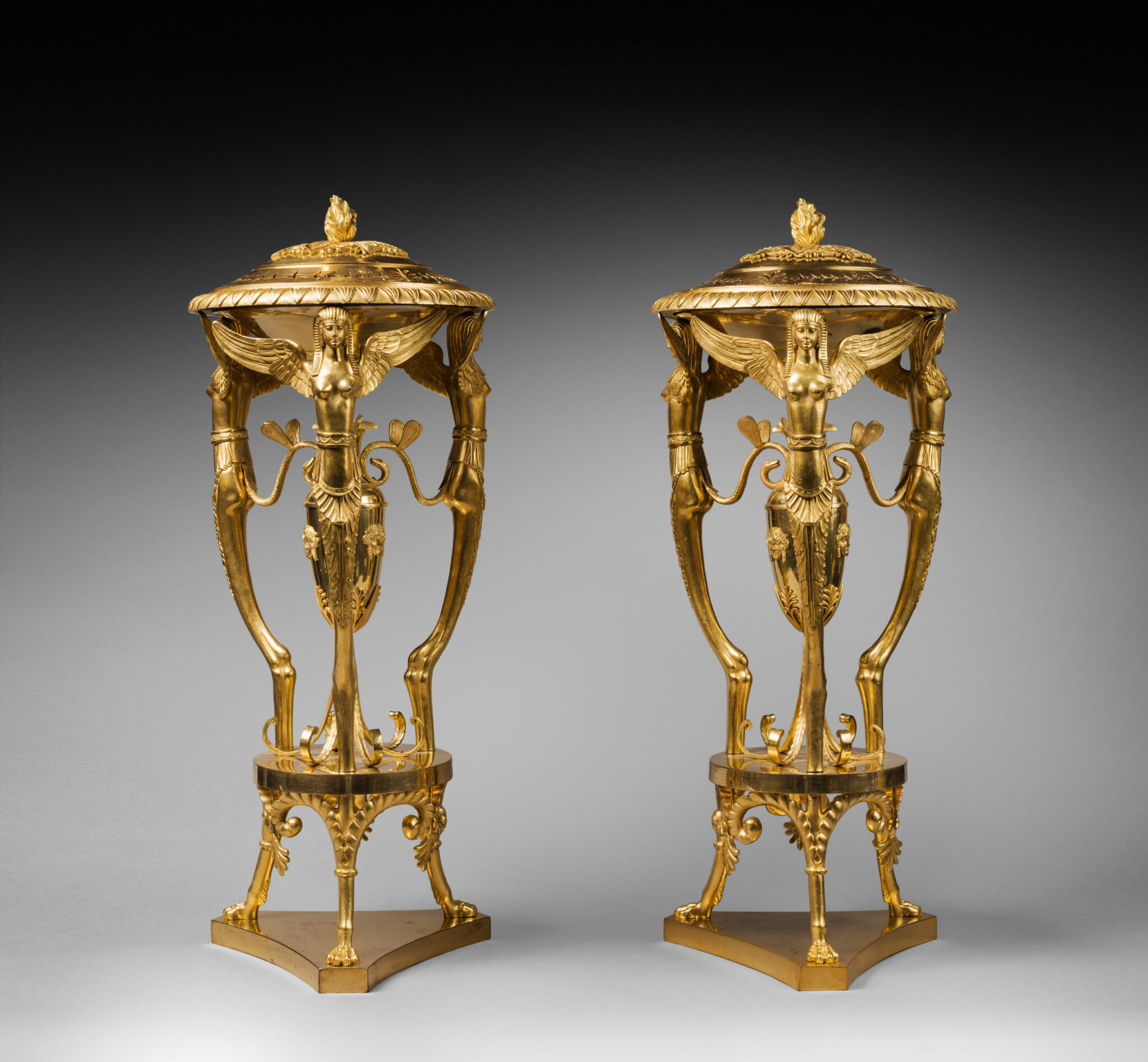 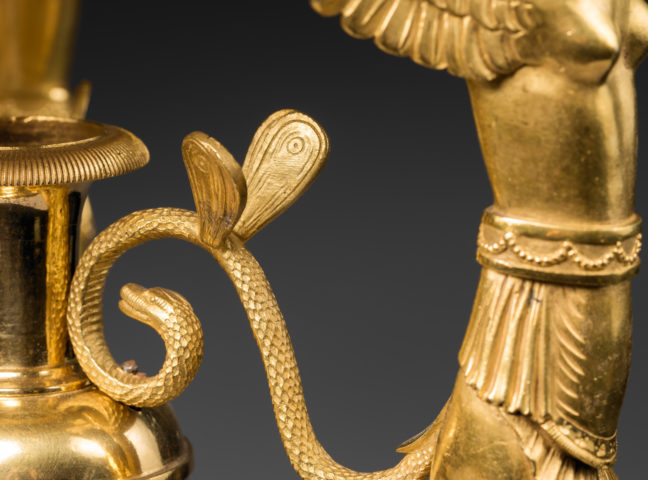 Made entirely of finely chased gilt bronze with matte and burnished finishing, the incense burners are in the form of Neoclassical atheniennes. The round bowls, whose lids are pierced with palmettes and leaf friezes, have flame finials and rest upon three monopode feet in the form of winged sphinxes; the sphinxes are coiffed with Egyptian headdresses and their torsos terminate in lions’ feet. Their scrolling serpentine tails are covered in finely chased snake scales and are adorned with butterfly wings. The tails are joined to classical amphoras whose bellies are decorated with mascarons, while their lower portions are decorated with water leaves and palmettes; they are supported on long stylized leaves that are set on circular pedestals; the lower portion, in the form of a tripod, terminates in lions’ paws that emerge from wide palm leaves centered by stylized palmettes. The shaped triangular bases have concave sides.

The remarkable design of the present important pair of athenienne incense burners was inspired by a painting by Jean-Baptiste Vien, entitled “La vertueuse athénienne” in which a priestess is depicted burning incense in a tripod-from incense burner. The word “athenienne”, which first appeared in the title of that painting, was used in 1773 by the Parisian engraver Jean-Henri Eberts. The design was freely inspired by a classical model that was known as early as the 18th century, having been discovered during the archaeological excavation of the temple of Isis at Herculaneum. This type of tripod served as inspiration for the best Parisian and European bronze casters, during the 18th century and in the early decades of the following century. A pair of atheniennes, which is attributed to the Manfredini brothers and was strongly influenced by the classical model, is now in the Villa Masséna in Nice (see L. Mézin, La Villa Masséna du Premier Empire à la Belle Epoque, 2010, p. 85). A second pair, which was made in Paris during the Empire period, and is comparable to the present pair, is in the Paris Musée des Arts décoratifs (illustrated in the exhibition catalogue L’Aigle et Papillon, Symboles des pouvoirs sous Napoléon 1800-1815, O. Nouvel-Kammerer, “La Victoire au quotidien et les gardiens du régime”, Paris, Les Arts décoratifs, 2007, p. 195, catalogue n° 97). 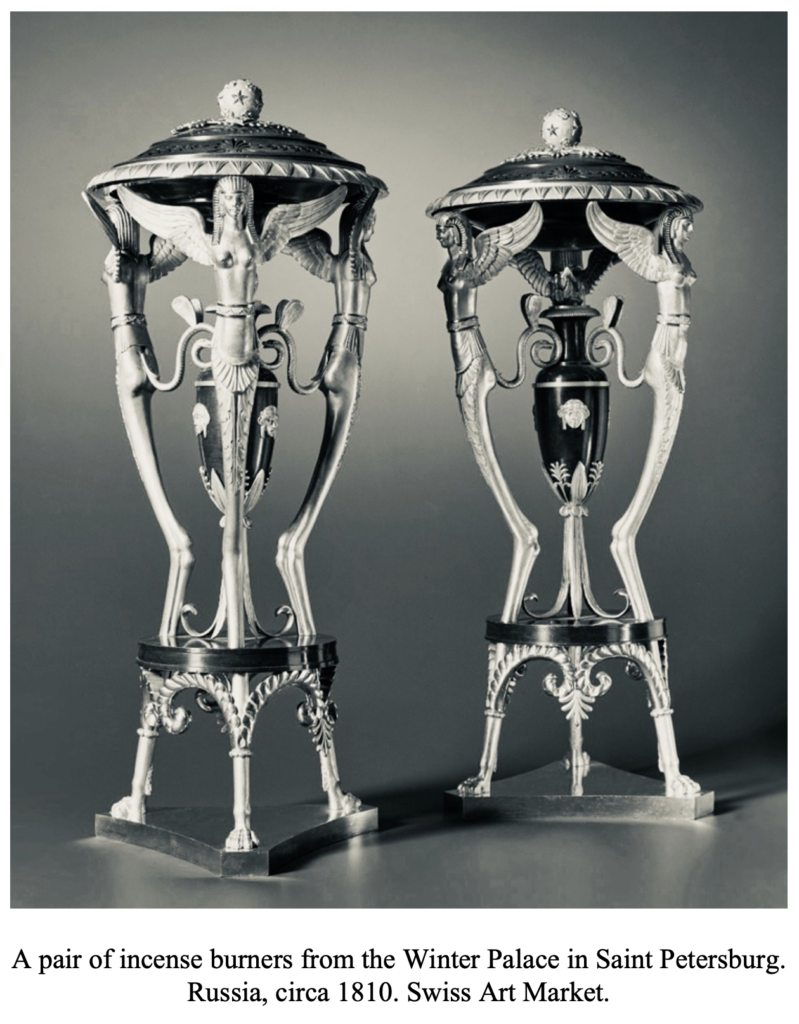 A pair of incense burners that are identical to the present pair, though they juxtapose patinated bronze and gilt bronze, are currently on the Swiss art market. Their remarkable design and the particular manner in which the bronze is fashioned, allows their attribution to a Russian bronze caster, who was probably active in Saint Petersburg during the early decades of the 19th century. A handwritten inventory allows us to ascertain their provenance. During the 19th century they were in the Winter Palace in Saint Petersburg, which was the residence of Maximilian, Duke of Leuchtenberg, who was the grandson of Empress Joséphine and the husband of Grand Duchess Maria Nikolaevna, daughter of Tsar Nicolas I. There is a watercolor by Eduard Petrovich Hau (1807-1887), today in the Hermitage Museum in Saint Petersburg, which is dated 1866 and depicts the palace’s Turquoise Salon. It places the incense burners in that room, in front of the large mirror in the back of the room (see E. Ducamp, Vues du palais d’Hiver à Saint Pétersbourg, 1994, p. 218). 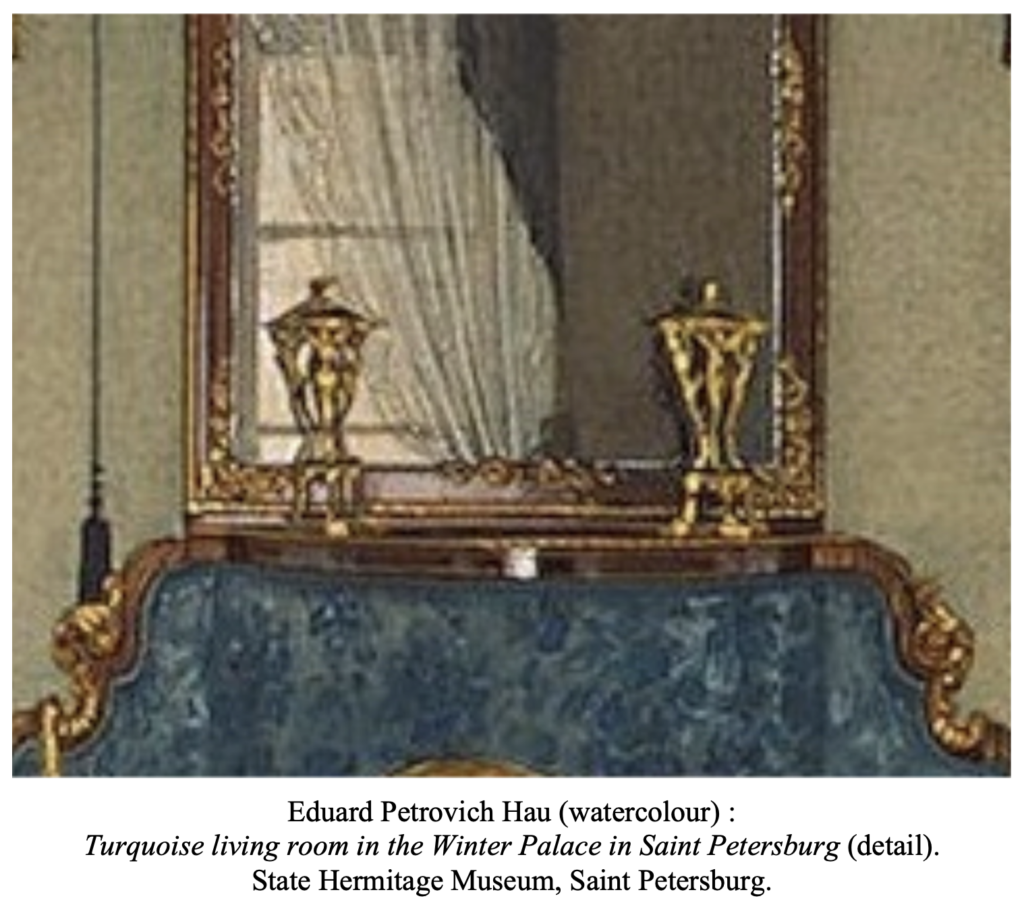 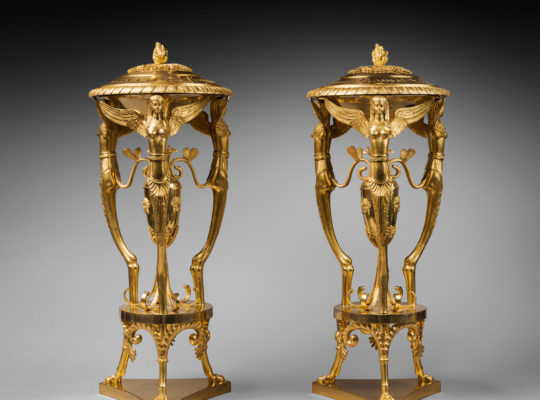 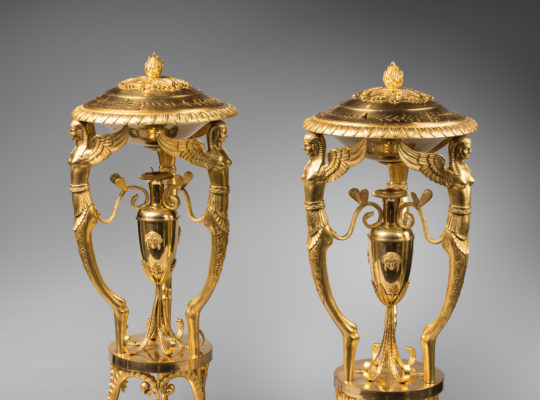 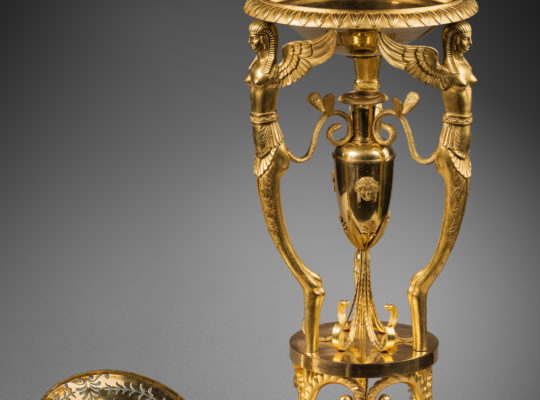 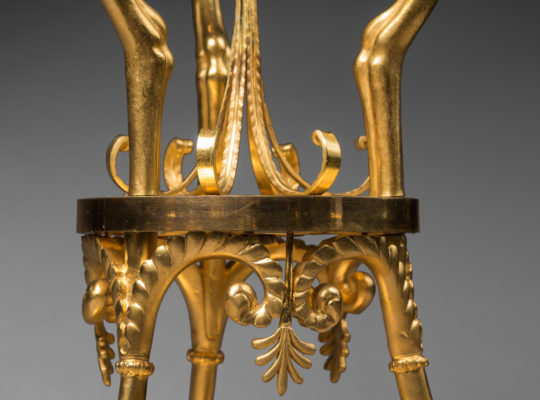 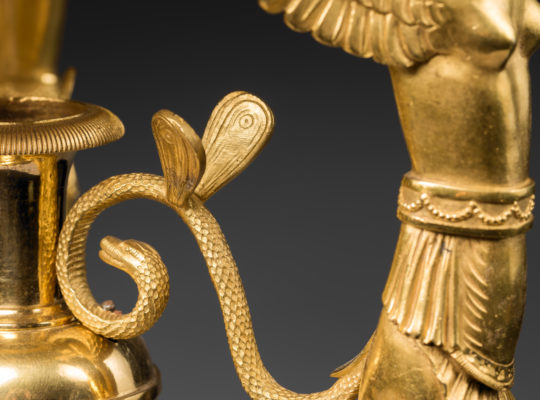 Write us
Call us
Print
Share
In the same category
O066 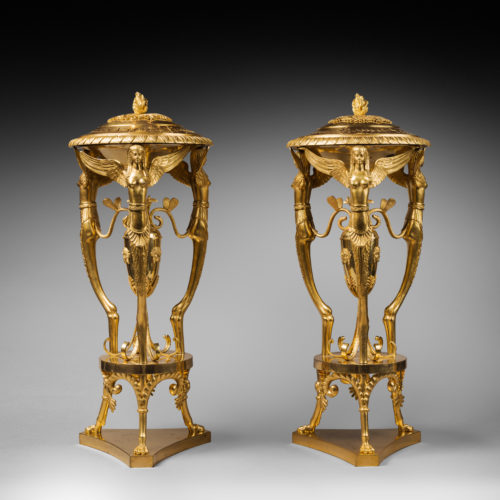