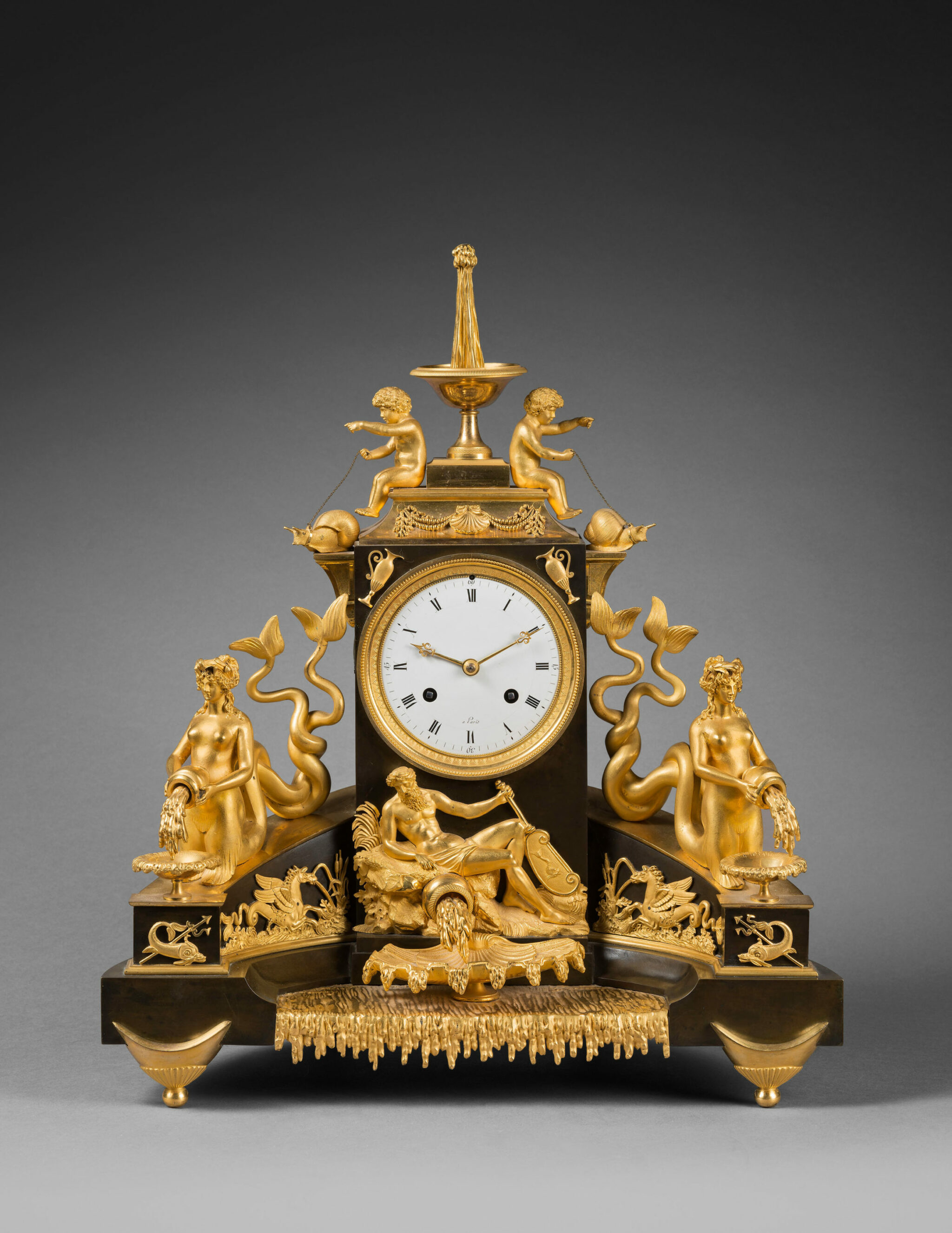 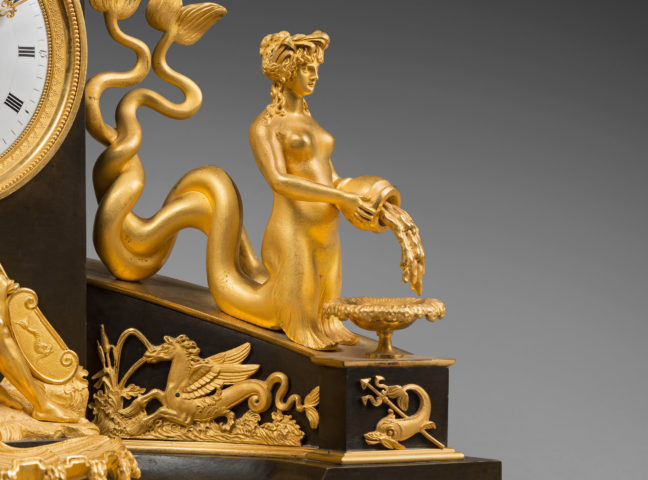 The round white enamel dial indicates the Roman numeral hours and the Arabic numeral five-minute intervals by means of two chased gilt bronze hands. The movement is housed in a magnificent architectural case in the form of a fountain that is made of finely chased patinated and matte gilt bronze. The clock is surmounted by a goblet with a spreading foot that is flanked by two seated putti who hold the reins of two snails. The movement is fitted in a rectangular case that is decorated with a reclining figure holding an oar, allegory of a river, while reclining on a stylized rocky terrace upon which lies an overturned jar from which water is spilling out into a large shell; it flows over into a basin of flowing water. On each side there is a terrace with applied motifs of seahorses, dolphins, reeds and tridents, on which sit mermaids with interlacing double tails, which are pouring water from jars into tazzas. The clock is raised upon crescent moon feet with gadrooned friezes and balls.

In Parisian horology during the early decades of the 19th centuries, the theme of the fountain   often served as a pretext to represent scenes in which allegorical or mythological figures are drinking or are at their toilet. For a comparable clock, see an example illustrated in P. Kjellberg, Encyclopédie de la pendule française du Moyen Age à nos Jours, Paris, 1997, p. 391. A second example, which is surmounted by dolphins with interlacing tails, see Tardy, La pendule française, 2ème Partie: Du Louis XVI à nos jours, Paris, 1975, p. 387. One further such model, signed “Bourdier Hger Mécanicien à Paris”, is in the Paris Mobilier national (illustrated in M-F. Dupuy-Baylet, Pendules du Mobilier national 1800-1870, Editions Faton, Dijon, 2006, p. 43, catalogue n° 2). Freely inspired by the monumental Trevi Fountain in Rome, the particularly unusual and rare design of the present clock stands out due to its realism, demonstrating the desire of the bronzier and the clockmaker to depict a veritable architectural fountain. A reference to a similar clock may be found in the probate inventory of Emmanuel-Marie-Louis, Marquis of Noailles (1743-1822), formerly French ambassador in Vienna: “A mantel clock by Mesnil in Paris depicting a fountain”; though brief, that description could very well refer to a clock much like the present example. 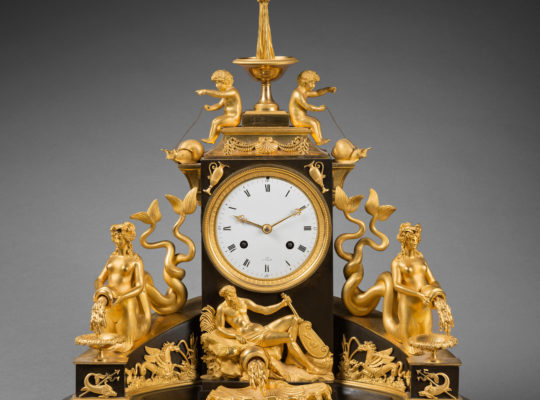 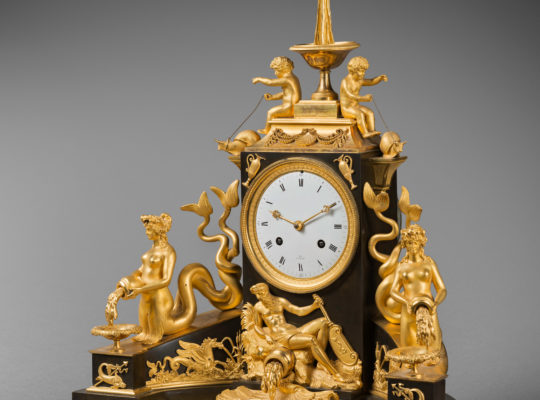 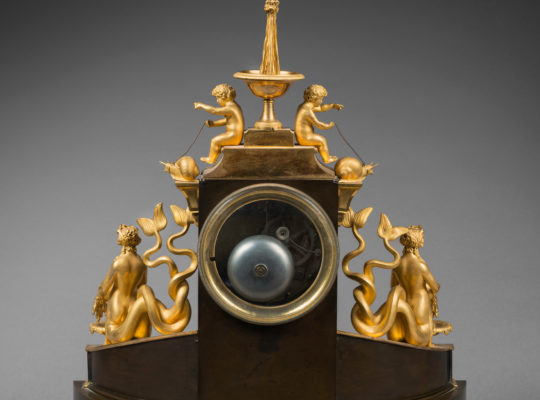 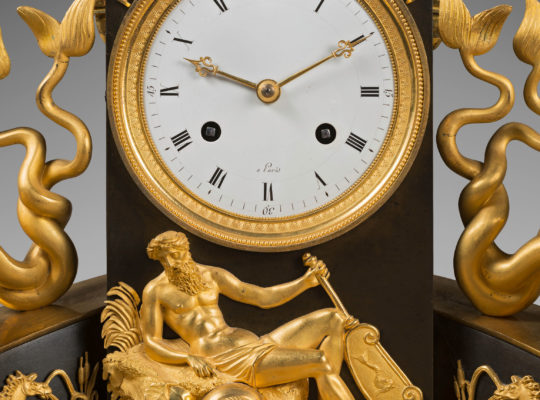 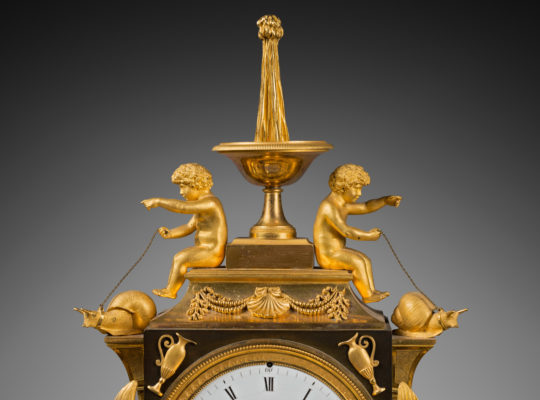 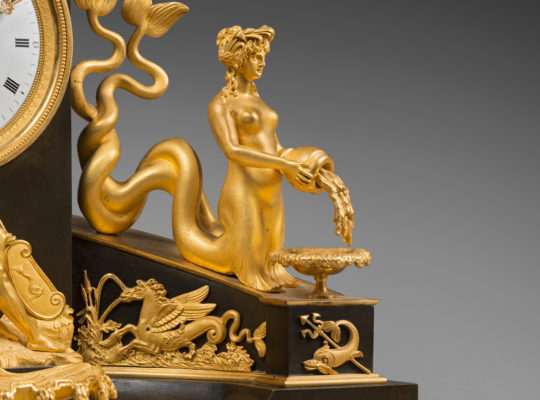 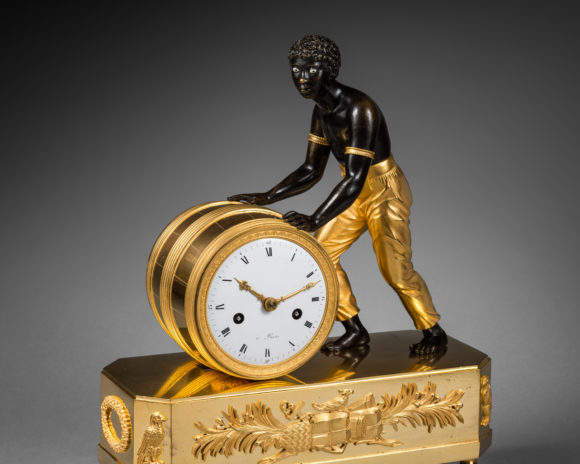 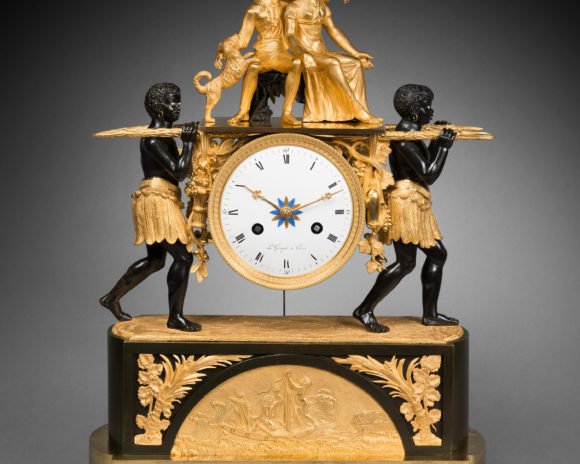 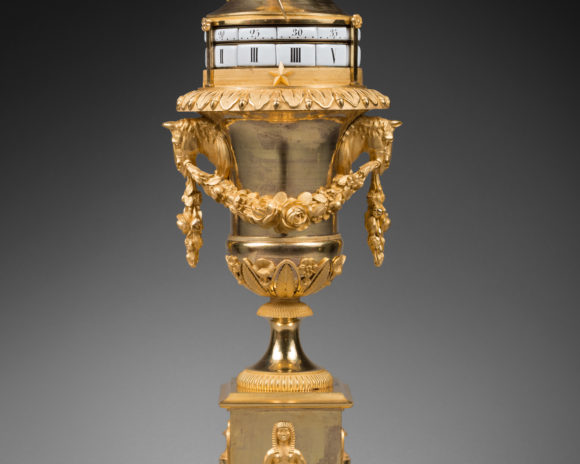 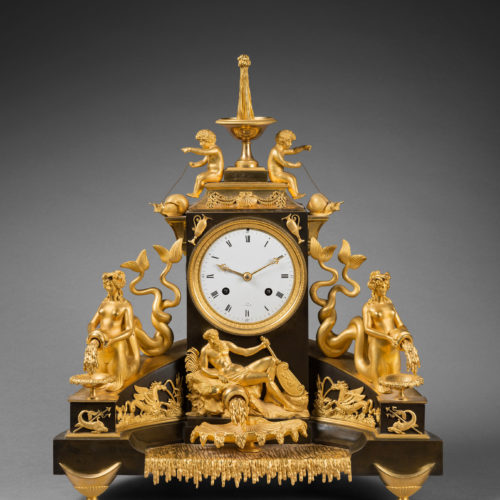