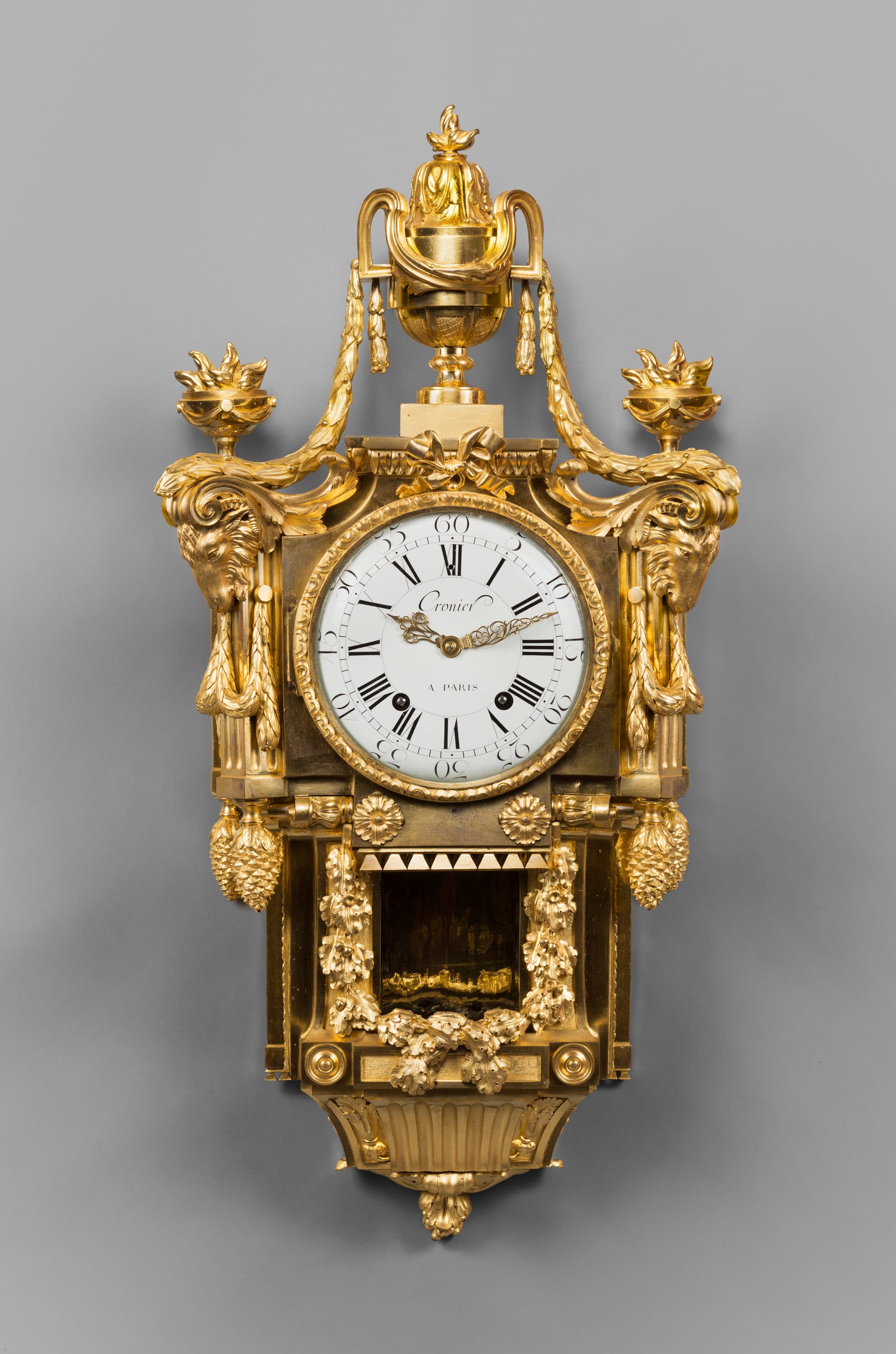 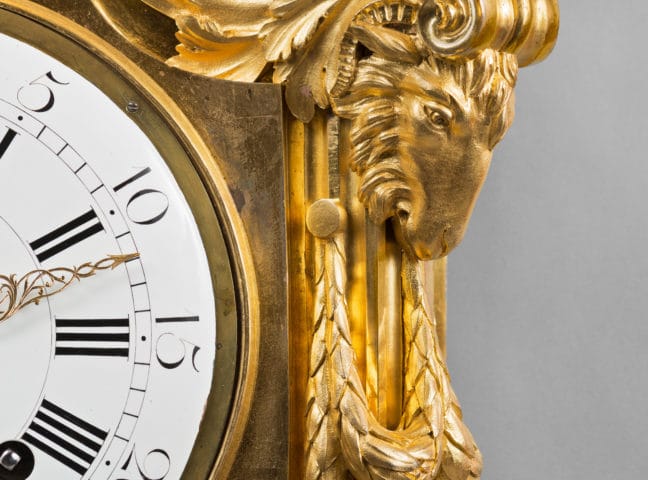 The round white enamel dial, signed “Cronier à Paris”, indicates the Roman numeral hours and Arabic numeral five-minute intervals by means of two pierced gilt bronze hands. The movement is housed in a finely chased matte and burnished gilt bronze neoclassical case. The clock is surmounted by a baluster vase whose lower portion is decorated with crosshatched reserves, with a lid that is adorned with acanthus leaves and is topped by a flame finial. Two laurel leaf swags pass through its handles; their extremities rest upon corner ornaments formed by volutes surmounting rams’ heads. Behind them, two flaming braziers with draperies are set on cubic bases. The sides of the clock are formed by fluted pillars that are adorned with laurel leaf swags and terminate in pinecone finials. A shaped plate under the dial is decorated with rosettes and a row of stylized truncated pyramids. In the lower part of the clock a glazed window affords a view of the pendulum; it is surrounded by oak leaf and acorn swags flanked by roundels, which frame an oblong matted reserve. The base, decorated with wide fluting, terminates in an acanthus leaf and seed bouquet.

By the mid 18th century, the ornamental vocabulary that had prevailed for several decades was being called into question. This movement, led by scholars, artists and connoisseurs, had been instigated by the extraordinary archeological discoveries that had taken place in the ancient Roman cities of Pompeii and Herculaneum, near Naples. Over the years, a handful of collectors, artists, and artisans succeeded in imposing a new style, known as neoclassicism, which was directly inspired by Greek and Roman antiquity. The present cartel was created within this particular context. Its highly architectural design and unusual size are remarkable, as is its decorative vocabulary directly influenced by the classical idiom. While the identity of the bronze caster who created it is not known, the exceptional quality of the casting, chasing, and gilding prove that it was made by very fine artisans, under the supervision of a superb bronzier such as Saint-Germain, Osmond or Caffieri. Among the similar cartels known to exist, one example signed “Gide à Paris” is illustrated in R. Mühe and Horand M. Vogel, Horloges anciennes, Manuel des horloges de table, des horloges murales et des pendules de parquet européennes, Office du Livre, Fribourg, 1978, p. 190, fig. 350. A few other identical cartels have been identified. One of these was offered at auction at the Palais Galliera in Paris by Me Ader on March 30, 1965, lot 75 (see Tardy, La pendule française, 2èe Partie: Du Louis XVI à nos jours, Paris, 1975, p. 310, fig. 2). A second clock was formerly in the well-known collection of Alberto Bruni Tedeschi (1915-1996).


Antoine Crosnier, or Cronier, was one of the most important Parisian clockmakers of the second half of the 18th century. The son of a Parisian master joiner, he became a master on March 1, 1763 and opened a workshop in the rue Saint-Honoré. He quickly became very successful among influential Parisian collectors of luxury horology, and worked with the finest artisans of the time, including the cabinetmaker Jean-Pierre Latz, the bronziers François Vion and the Osmonds, and the gilder Honoré Noël. During the 18th century, several of his clocks were mentioned as belonging to the Marshal de Choiseul-Stainville, the Marquis de Sainte-Amaranthe, the Duke des Deux-Ponts and the Prince Belosselsky-Belozersky. 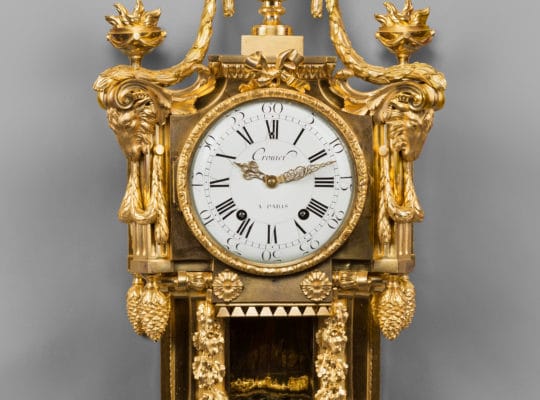 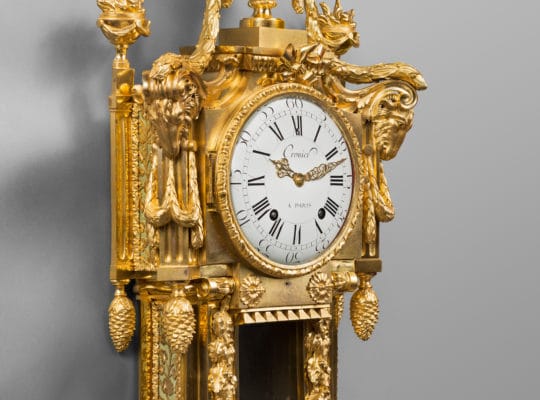 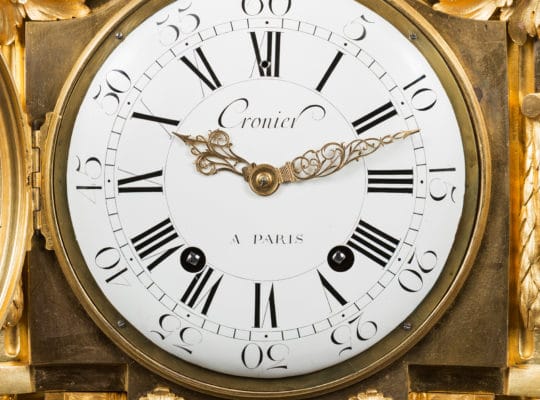 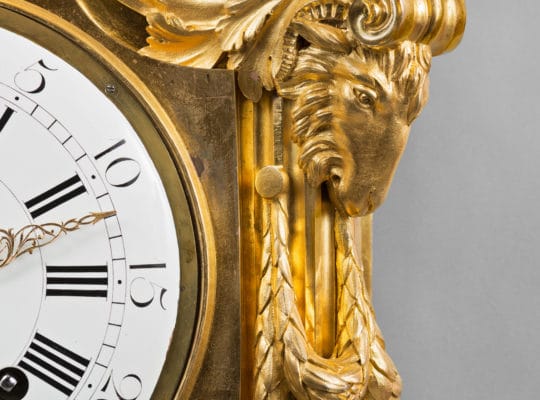 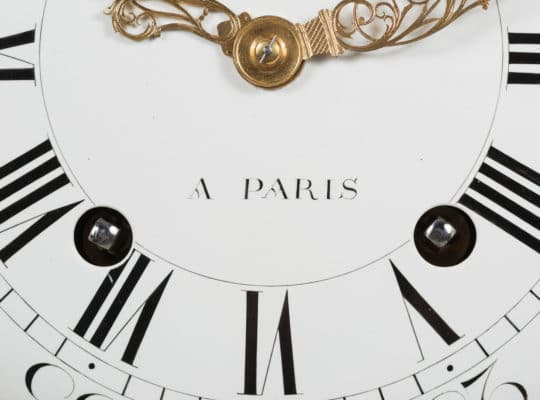 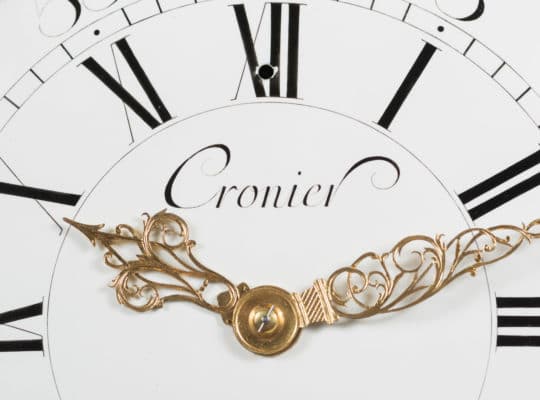 Write us
Call us
Print
Share
In the same category
Cronier 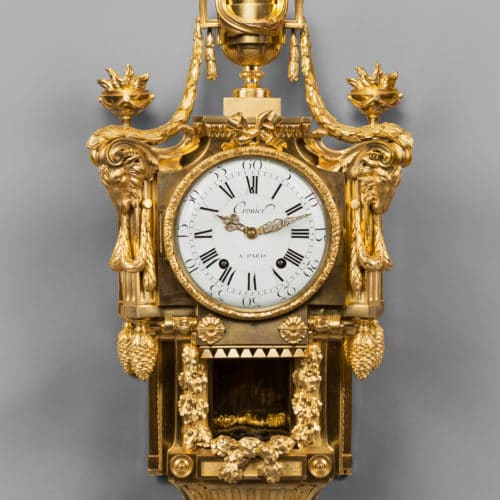