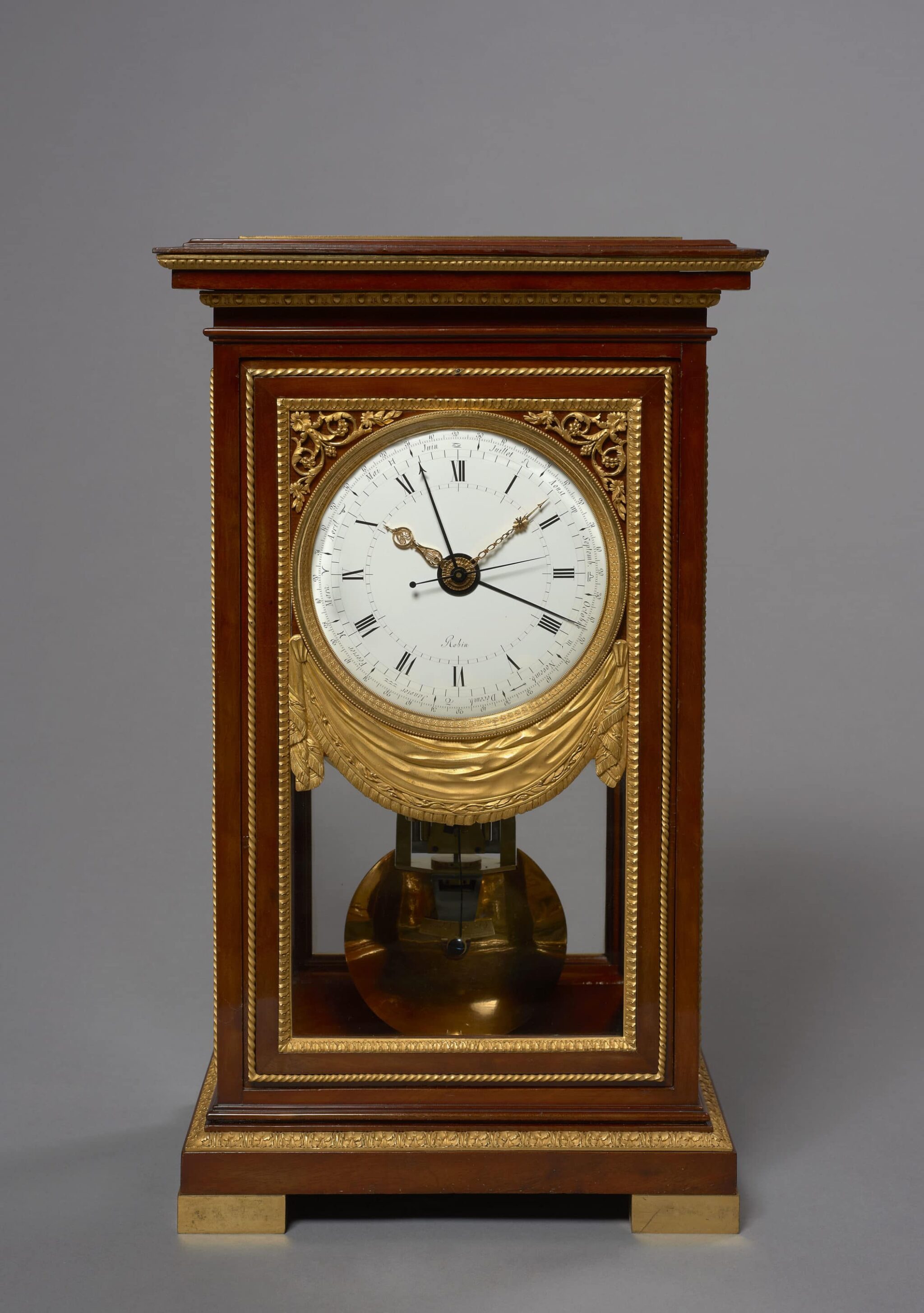 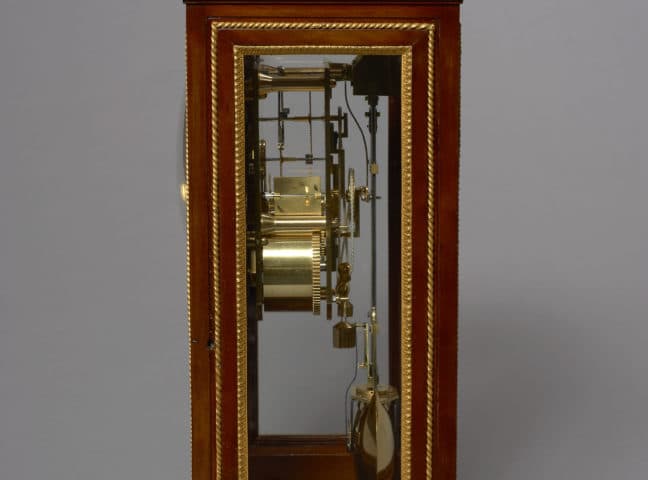 – Probably the clock that was estimated at 500 francs in 1830 in the study of the well-known porcelain manufacturer Christophe Dihl (1752-1830): “A regulator by Robin à Paris, with seconds and date, compensation balance with thermometer, in a glazed mahogany case”.

The enamel dial, signed “Robin”, also bears the mark “dub”, which is that of Etienne Gobin, known as Dubuisson (1731-1815), a celebrated Parisian enameler who was a contemporary and rival of Joseph Coteau. It indicates the Roman numeral hours, the minutes graduations, the seconds, and the annual calendar, with indication of the date and the months of the year, as well as the equation of time, which shows the difference between true time and mean time. Its remarkable movement with complications has a Graham escapement and a constant force remontoir d’égalité, a bimetallic gridiron pendulum with a pyrometer that bears information on the temperature of dilation of metal, and two weights for the going train. The mahogany or mahogany-veneered architectural case has a slightly protruding cornice and is glazed on all sides, which allows the remarkable and complex movement to be viewed. The clock is elegantly adorned with finely chased matte-gilded bronze mounts. The entablature of the cornice is decorated with a molding chased with water leaves and adorned with an egg-and-dart frieze. The glazed panels are framed by twisted cord and stylized leaf friezes. The top spandrels feature scrolls and vine leaves, and a magnificent fringed drapery and leafy garland highlight the curve of the dial. The molded protruding base is adorned with a frieze of parsley leaves. The clock is raised upon four quadrangular gilt bronze feet.

In addition to its highly precise movement with complications and its excellent craftsmanship, the present clock is noteworthy for its polished mahogany architectural case, whose sober design was intended to showcase the ingenious and extraordinary mechanism, as well as the beauty of the dial. One particular cabinetmaker specialized in creating such cases toward the end of the 18th century: Ferdinand Schwerdfeger (1734-1818). Schwerdfeger was mentioned several times as “Ferdinand” in several early 19th century auctions. Upon the death of his wife in 1803, his workshop was described as containing almost exclusively mahogany clock cases. It was Schwerdfeger who made the case for the geographic clock that Antide Janvier presented in 1791 to King Louis XVI, which is today in the Musée national du château de Fontainebleau (illustrated in M. Hayard, Antide Janvier 1751-1835, Horloger des étoiles, p. 1995, p. 79). It was very likely the same cabinetmaker – who also made luxury furniture for pour Marie-Antoinette – who was entrusted with the creation of the case of the present clock, whose design is particularly remarkable. Today only a few comparable clocks are known to exist. One example, signed Lepaute, whose design is less elegant, was delivered in 1804; it was intended for the bedchamber of Napoleon at Fontainebleau Palace (illustrated in J-P. Samoyault, Pendules et bronzes d’ameublement entrés sous le Premier Empire, Paris, 1989, p. 73). A second clock, signed “Robin”, is illustrated in Tardy, La pendule française, 2ème partie: du Louis XVI à nos jours, Paris, 1975, p. 325. 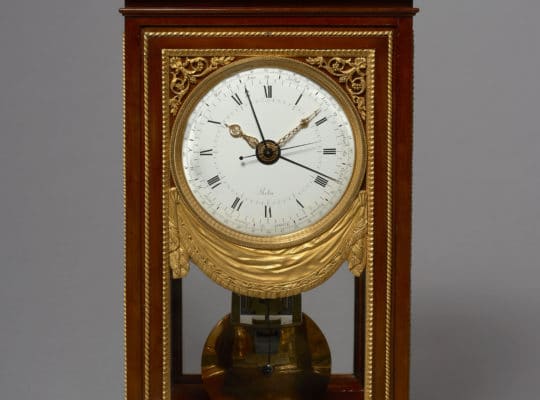 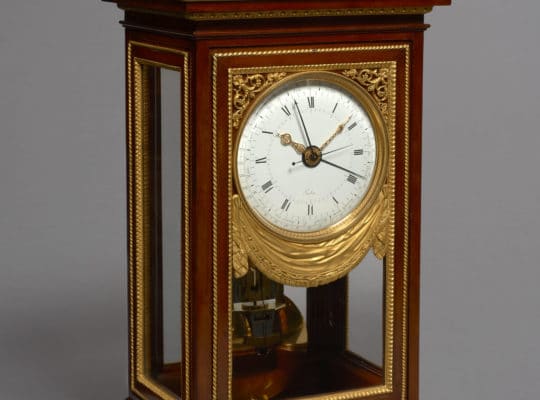 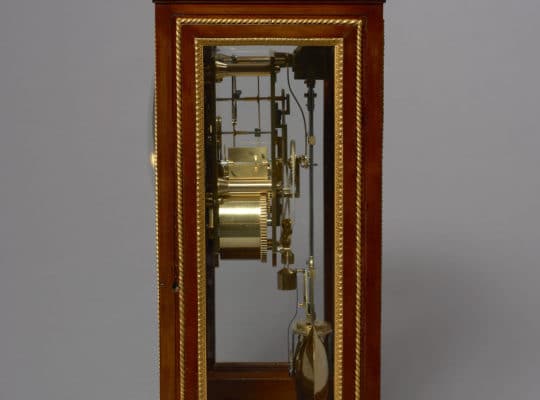 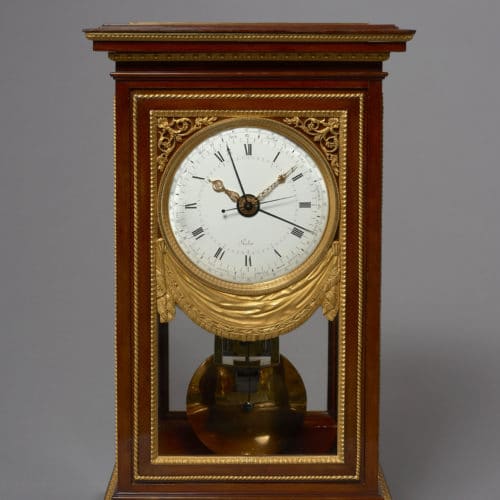