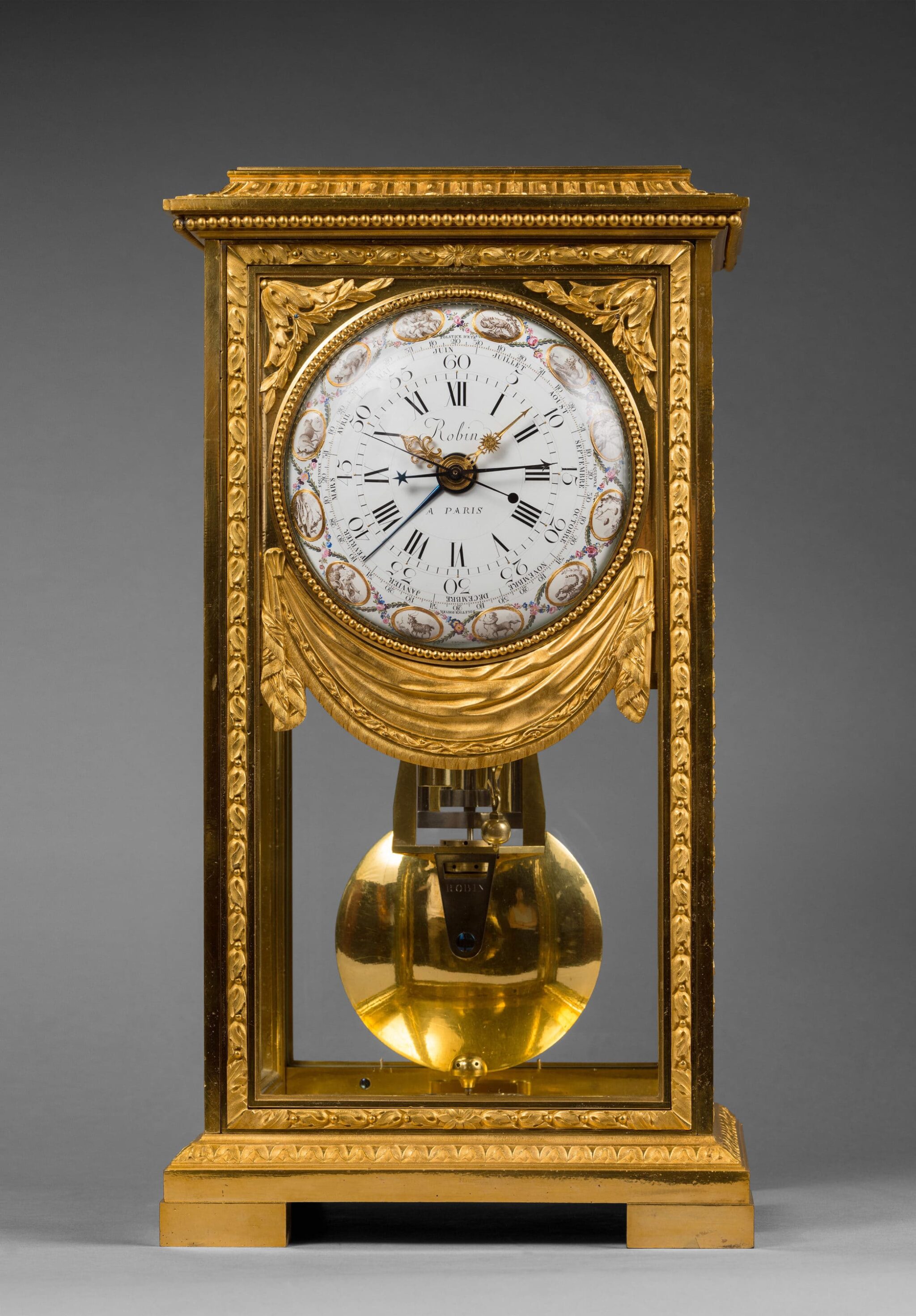 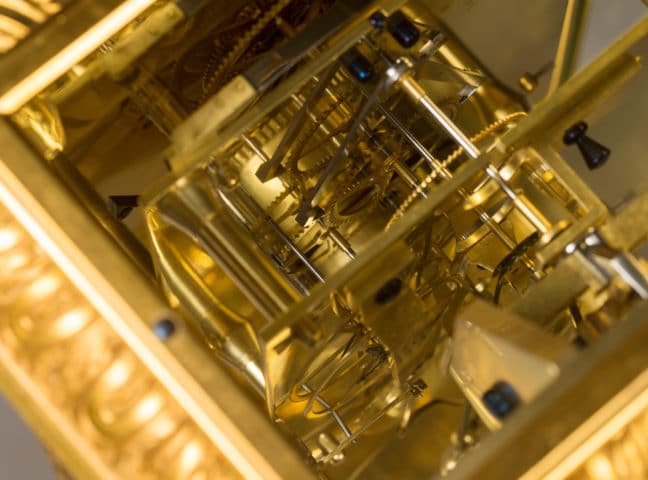 This exceptional desk, or mantel, regulator is one of the most luxurious Parisian clocks of the latter part of the reign of Louis XVI. Its complex movement with complications has a Graham escapement and a constant force remontoir d’égalité, with a bimetallic gridiron pendulum signed “Robin”; it is driven by two weights, with instructions for winding indicated on the back of the front door: “Remonté à gauche faite passer le quantième” (Wind to the left, make the date advance). The magnificent neoclassical architectural case is made of finely chased matte gilt bronze. All four sides, as well as the top, are glazed so that the complex movement may be admired. The case, which is raised on four quadrangular feet, is elaborately adorned with a molded frieze alternating with toothed and leaf friezes on the chapter, a bead frieze adorning the slightly protruding cornice and the bezel, with acanthus and laurel leaf spandrels, stylized leaves framing the front, a stylized leaf frieze adorning the base, and a magnificent chased drapery with fringe and a leafy garland under the dial.

The dial, signed “Robin à Paris”, is a true masterpiece; it also bears the signature of Joseph Coteau, the most famous enameler of the time. It indicates the Roman numeral hours, the Arabic numeral five minute intervals, the seconds, the date, the months, and the equation of time, showing the difference between real time and mean time. Along its outermost edge, it indicates the twelve signs of the zodiac painted in shades of gray within oval medallions framed by interlacing polychrome leaf and flower branches. There are four hands: one, made of pierced gilt bronze with a sun, indicates the equation of time. There are three other blued steel hands.

The present clock represents the quintessence of luxury Parisian horology of the Louis XVI period. This type of clock was intended for a small handful of connoisseurs, often individuals who were very close to the royal family. Certain contemporary documents give us information on the type of collector that might have owned such a masterpiece. One such clock was briefly mentioned in the probate inventory of Denis-Pierre-Jean Papillon de la Ferté, the director of the Menus Plaisirs du Roi, and was feature in the February 1797 sale of his collection: “305. A square shaped clock with glazed panels, half-second movement, with equation, remontoire and striking, made by Robin”. A second comparable clock was described a few years earlier, shortly after the Revolution, in an inventory of the horological collection of Queen Marie-Antoinette, which was maintained by Robin. It described a clock that was nearly identical to the present one: “28. A square clock with architectural case and glazed panels, in matte gilt bronze, with compensation pendulum, movement with hours, minutes, seconds, with striking, date, day of the week, the figures of the zodiac painted in miniature on the dial, by Robin” (see P. Verlet, Les bronzes dorés français du XVIIIe siècle, Paris, 1999, p. 466). 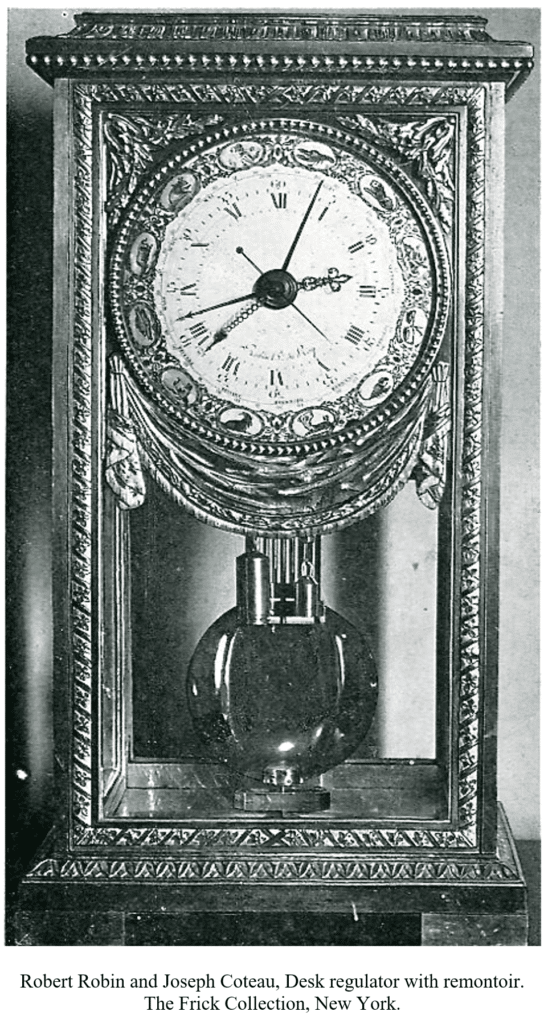 Among the small number of similar regulators known today, most bear the signatures of the clockmaker Robin and the enameler Coteau, who probably worked on the model at the request of one of the great marchands-merciers of the time, such as Simon-Philippe Poirier and his associate Dominique Daguerre, the most important Parisian suppliers of luxury objects. One comparable example now in a private collection is illustrated in D. Roberts, Precision Pendulum Clocks, 2004, p. 32. Two other regulators by Robin, formerly in the Winthrop Kellogg Edey collection, are in the Frick Collection in New York; their cases have been attributed to the well-known bronzier Pierre-Philippe Thomire (Inv. 1999.5.150 and 1999.5.151) (respectively illustrated in dans Tardy, La pendule française, 2ème Partie: du Louis XVI à nos jours, Paris, 1975, and in C. Vignon, The Frick Collection Decorative Arts Handbook, New York, Scala, 2015). 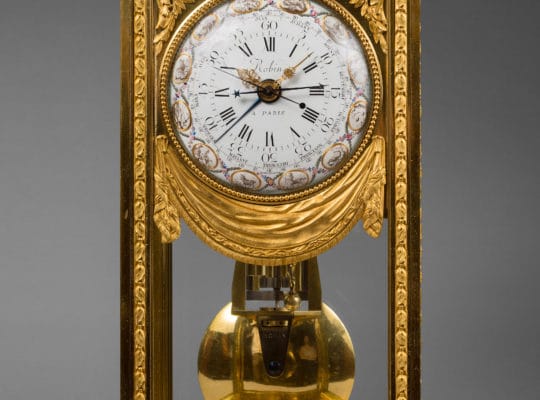 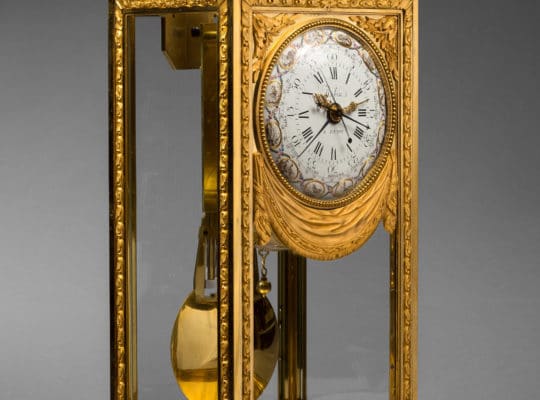 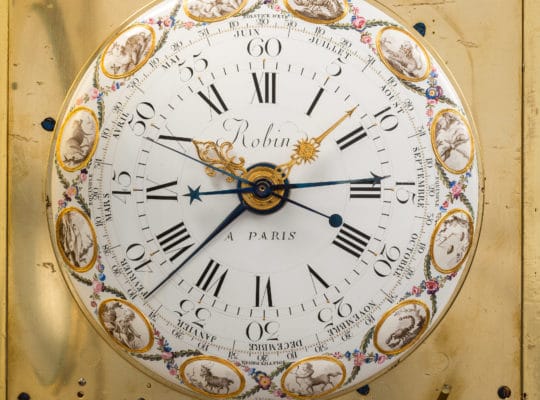 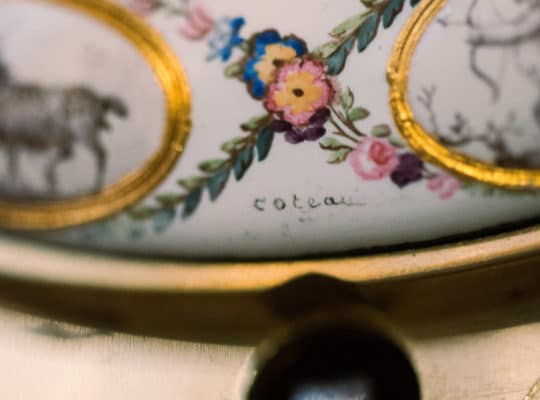 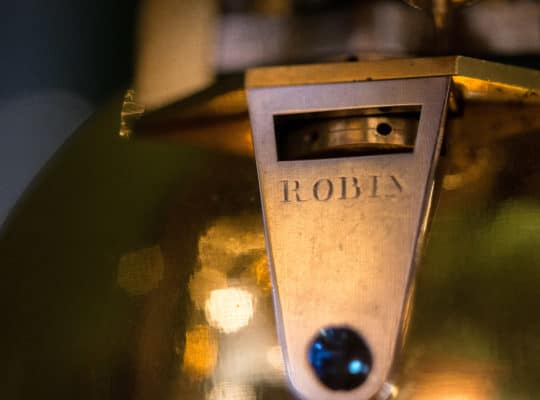 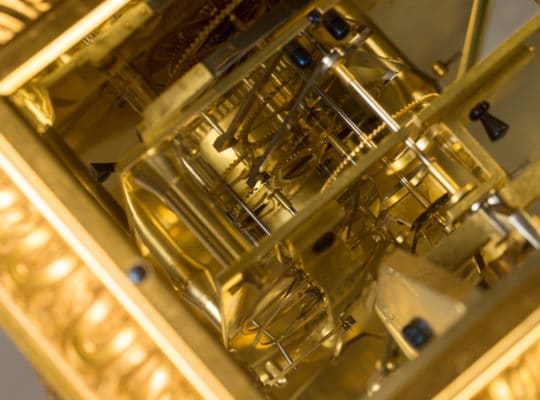 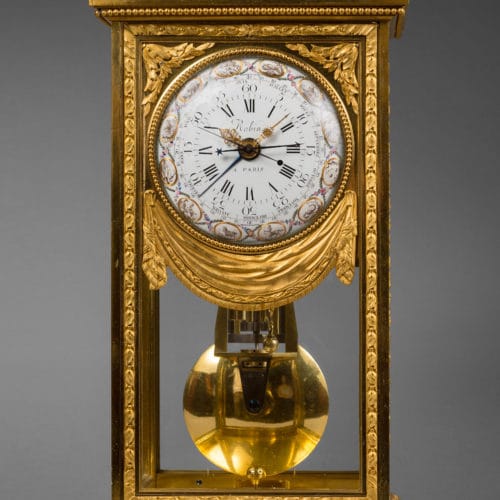