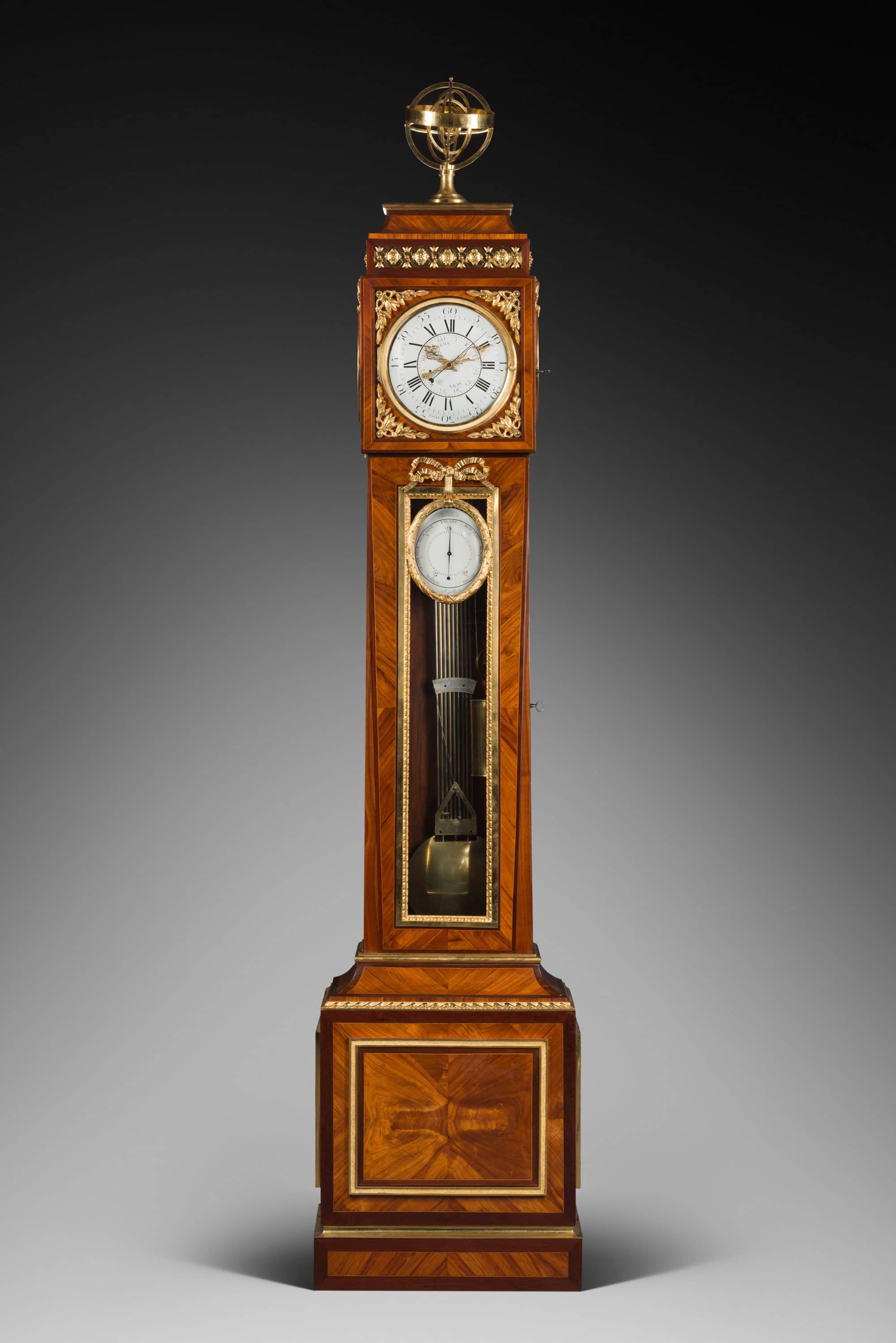 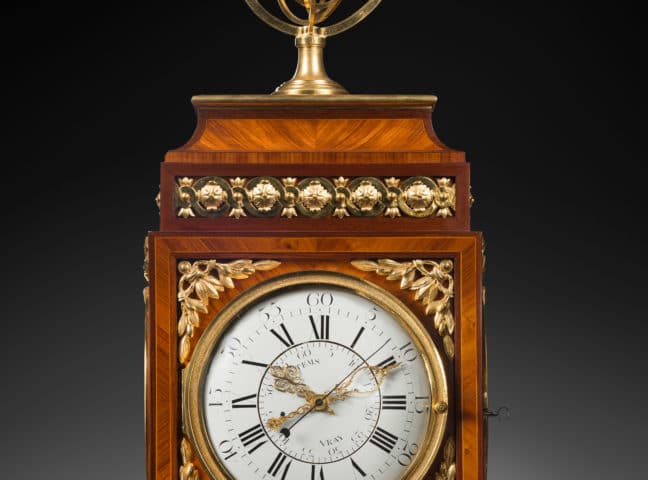 The counter enamel signed by enameler Elie Barbezat and dated 1776

Stamped: B LIEUTAUD on the back of the case

The white enamel dial, signed “Robin à Paris”, indicates the Roman numeral hours and Arabic numeral five-minute intervals by means of two pierced gilt bronze hands; the seconds are indicated by a central hand. A second round dial indicates the equation of time, i.e. the difference between true time – or solar time – and mean time. The façade also features a barometer that measures atmospheric pressure. The counter enamel is signed by the enameler  “Barbezat” and is dated “1776”. The movement, with a bimetallic pendulum and large bob, bears a thermometer indicating metal dilation. It is housed in a rosewood-veneered case with amaranth wood frames flanked by bands of lighter colored wood. The case is elaborately decorated with finely chased gilt bronze mounts including plain frames, matted reserves, friezes, molding decorated with stiff leaf motifs, plain medallions, ribbon-tied laurel toruses, and olive and laurel branch spandrels. It is surmounted by a concave entablature that surmounts an interlace frieze centered by rosettes, and is topped by an armillary sphere set on a molded pedestal.

The unusual design of this important longcase regulator was created by cabinetmaker   Balthazar Lieutaud during the early years of the reign of Louis XVI. The cabinetmaker, who specialized in clock cases, produced several comparable pieces featuring variations in the chased gilt bronze mounts. One such model was in the collection of Joseph Bardac (sold Paris, Me Lair-Dubreuil, December 9, 1927, lot 118). A second example, surmounted by the figure of Father Time, is in the Victoria and Albert Museum in London (illustrated in O. Bracket, Catalogue of the Jones collection, V&A Museum). Three simpler examples are illustrated in Jean Nicolay, L’art et la manière des maîtres ébénistes français au XVIIIe siècle. During the 18th century, a similar regulator belonged to the well-known scientist and aviation pioneer Jean-François Pilâtre de Rosier (1754-1785): “A clock bearing the name of the Robin, clockmaker in Paris, striking the hours and half hours, marking the seconds, and containing a barometer, in its square rosewood-veneered case, with enamel dial and gilt copper ornaments, 1800 livres”.


Balthazar Lieutaud (d. 1780) is one of the most important cabinetmakers of the Louis XV period and the early neoclassical period, he was born into a family of Parisian furniture makers – his father and grandfather were both cabinetmakers. He became a master in March 1749, opening a workshop in the rue de la Pelleterie, then in the rue Denfer. He specialised in regulator and cartel cases for which the gilt bronze mounts were made by the best bronziers and chasers of the time, including Charles Grimpelle and the Caffieri. 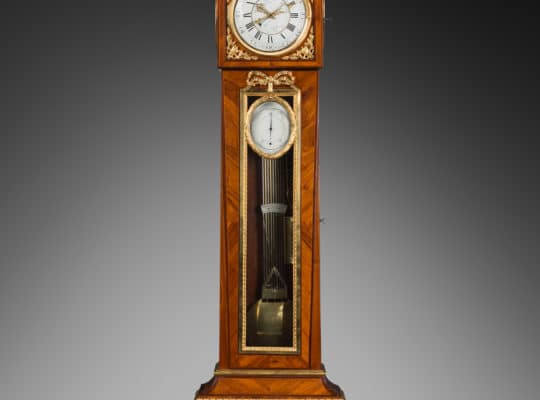 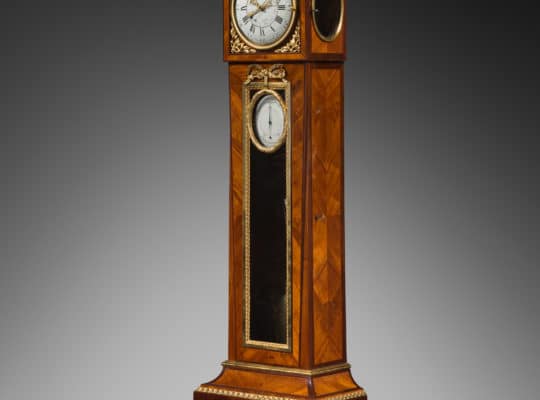 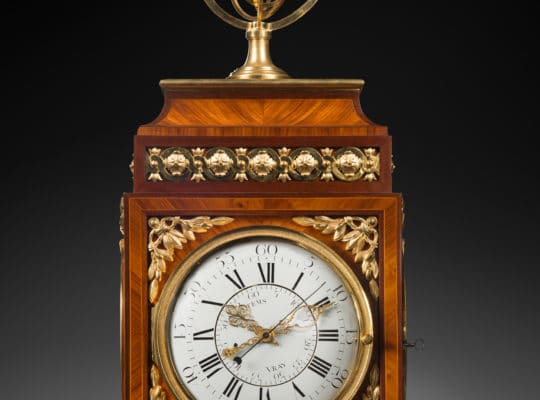 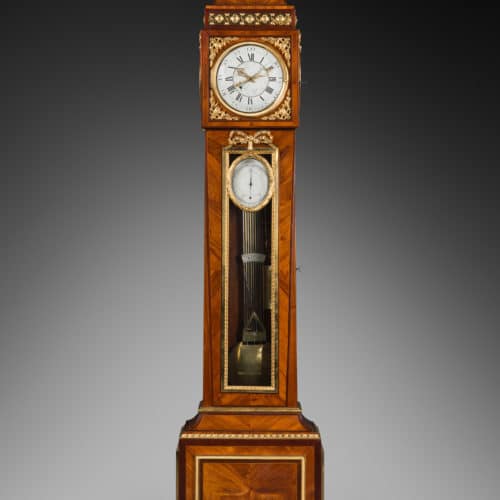