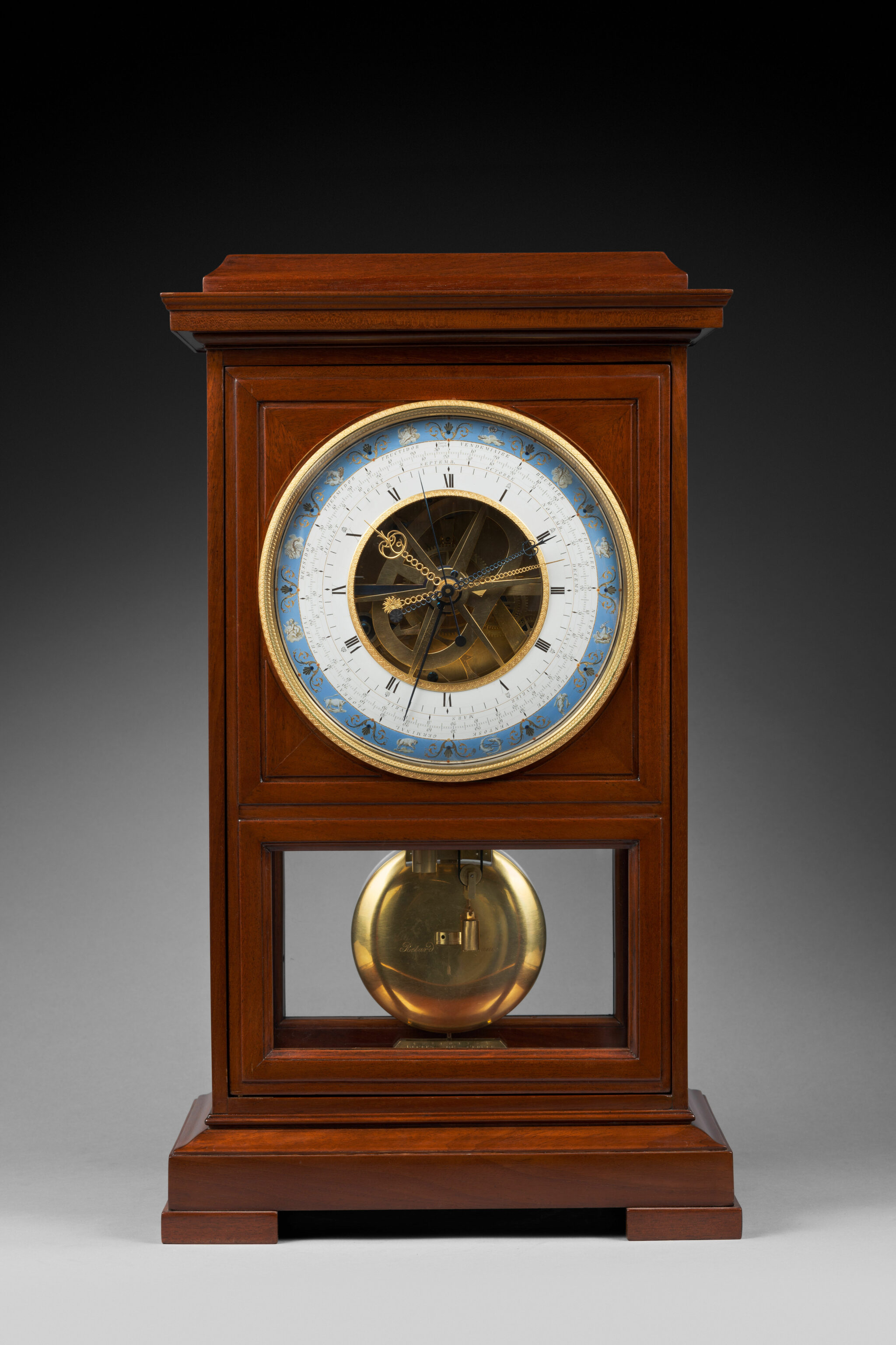 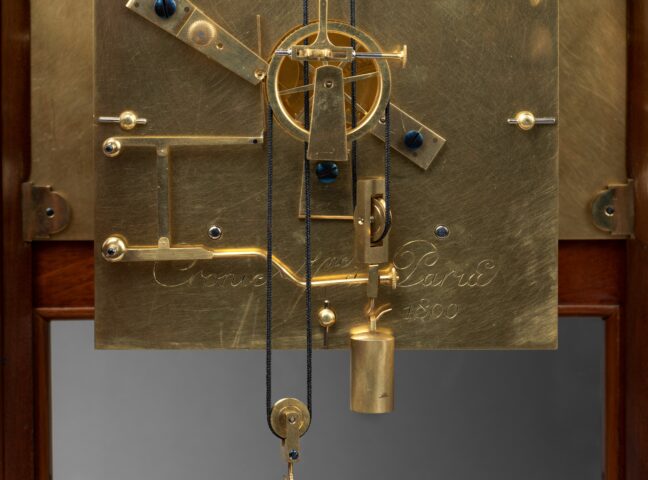 The white enamel ring dial, with a sky-blue band with alternating leaf motifs and palmettes adorned with cabochons framing camaïeu figures representing the signs of the Zodiac along its outermost border, is dated “1800” and signed “Dubuisson”. This is the signature of Etienne Gobin, the principal rival of Joseph Coteau and one of the most famous Parisian enamellers of the time. It indicates the Roman numeral hours, the minutes graduations, the Gregorian and Republican calendars, and the equation of time (that is, the difference between true, or solar time, and mean time). It also has a central seconds hand. All this information is indicated by five hands, two of which are made of chased and gilt bronze that is pierced with an interlace pattern.   The dial is fixed to a hidden face plate that is signed “Cronier jeune/Elève de Robin”; it has two winding holes flanking the words “Remontez à gauche”. The back plate is also signed “Cronier Jne à Parisd1800”. The movement with complications, which has a compensated bimetallic pendulum, features a remontoir d’égalité, which is an ingenious device that allows unvarying energy to be delivered to the escapement and to avoid variations in power. The mechanism is housed in a rectangular case in the form of a mahogany pedestal with molded reserves, a molded and stepped pediment, a quadrangular entablature and a base with rectangular feet. All four sides are glazed; the façade is partially glazed.

In addition to its extremely precise movement with complications and its exceptional finishing, the present clock is remarkable due to its architectural case in polished mahogany, whose exceptionally sober design is meant to show off the ingenious mechanism and the beauty of the dial. Toward the end of the 18th century, one cabinet maker, in particular, was known for this type of case: Ferdinand Schwerdfeger (1734-1818), who is mentioned as “Ferdinand” in many auctions of the early 19th century. Upon the death of his wife in 1803, his workshop was said to contain almost nothing but mahogany clock cases. It was Schwerdfeger who made the case of the geographical clock that Antide Janvier presented in 1791 to King Louis XVI and which is today in the Musée National du Château de Fontainebleau (illustrated in M. Hayard, Antide Janvier 1751-1835, Horloger des étoiles, p.1995, p. 79) Schwerdfeger, who also made furniture for Marie Antoinette, was the creator of the case of the present clock. Among the known clocks with mahogany cases that are comparable and are often attributed to Schwerdfeger, one example is in the Musée des Beaux-Arts et d’Archéologie of Besançon (pictured in R. Mühe and Horand M. Vogel, Horloges anciennes, Bibliothèque des Arts, Fribourg, 1978, p. 115, fig. 152). A second clock is in the Centre national des Arts et Métiers in Paris (illustrated in Tardy, La pendule française dans le Monde, Paris, 1994, p. 145).


The signature “Cronier jeune élève de Robin” appears only on horological masterpieces. Among the other known clocks that are also signed “Cronier jeune élève de Robin”, one astronomic clock was formerly offered on the art market in Switzerland. Despite the evident technical mastery of this clockmaker, little historical information is available about him. We know that he was mentioned in Paris during the Empire period in the Place des Trois-Maries (see J. de la Tynna, Almanach du commerce de Paris, des départements de l’Empire et des principales villes du monde, Paris, XIIe année, 1809, p.198). He was probably related to Antoine Cronier (or Crosnier), one of the best Parisian clockmakers of the second half of the 18th century, whose daughter Elizabeth-Emilie married a Parisian clockmaker named Antoine-Marie Philibert on 13 ventose year VII (circa 1798), and who lived at 50 Place du Pont Michel. At the time of the marriage, Antoine Cronier had two sons who were briefly mentioned, François-Antoine-Louis and Pierre-Joseph, but who were no doubt too young to be apprentices in Robin’s workshop, for they still lived with their parents at 140 rue Honoré. Jean-Baptiste-François Cronier, a second clockmaker who was active during the reign of Louis XVI, and who was almost certainly related to Antoine Cronier, is an interesting candidate – he became a master on September 27, 1781, had a son named Jean-François who also became a horologist, had a workshop in the Quai de la Mégisserie. It may be that he initially signed “Cronier jeune”, and then, after his younger brother became a clockmaker, signed “Cronier aîné” to differenciate between their work (see Tardy, Dictionnaire des horlogers français, Paris, 1971, p. 148). 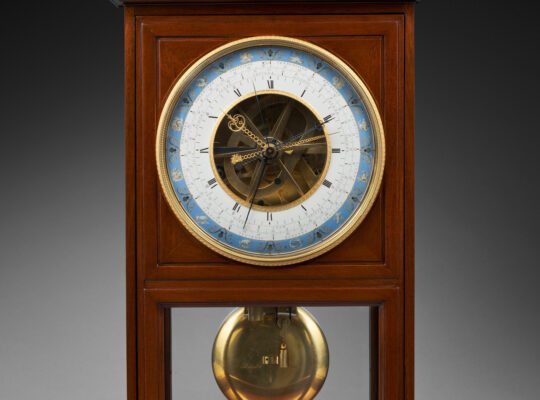 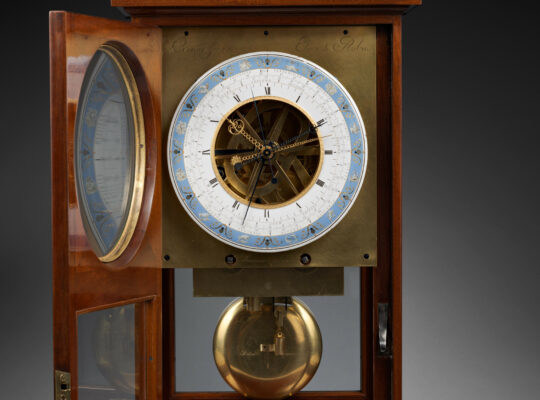 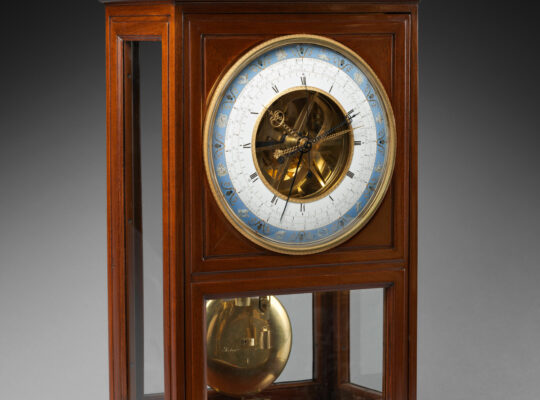 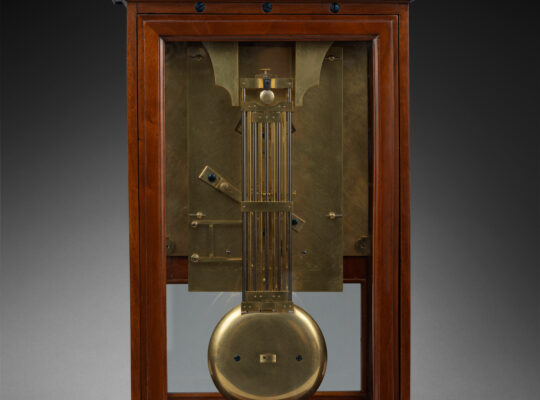 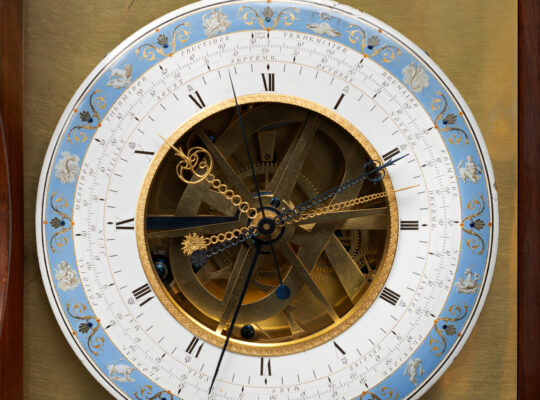 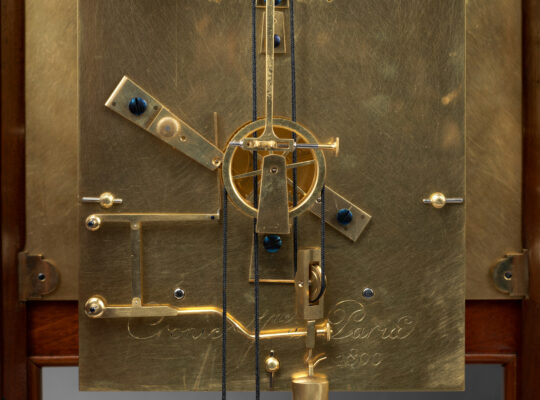 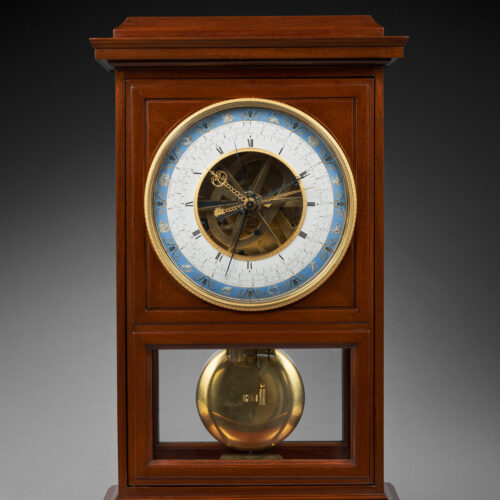