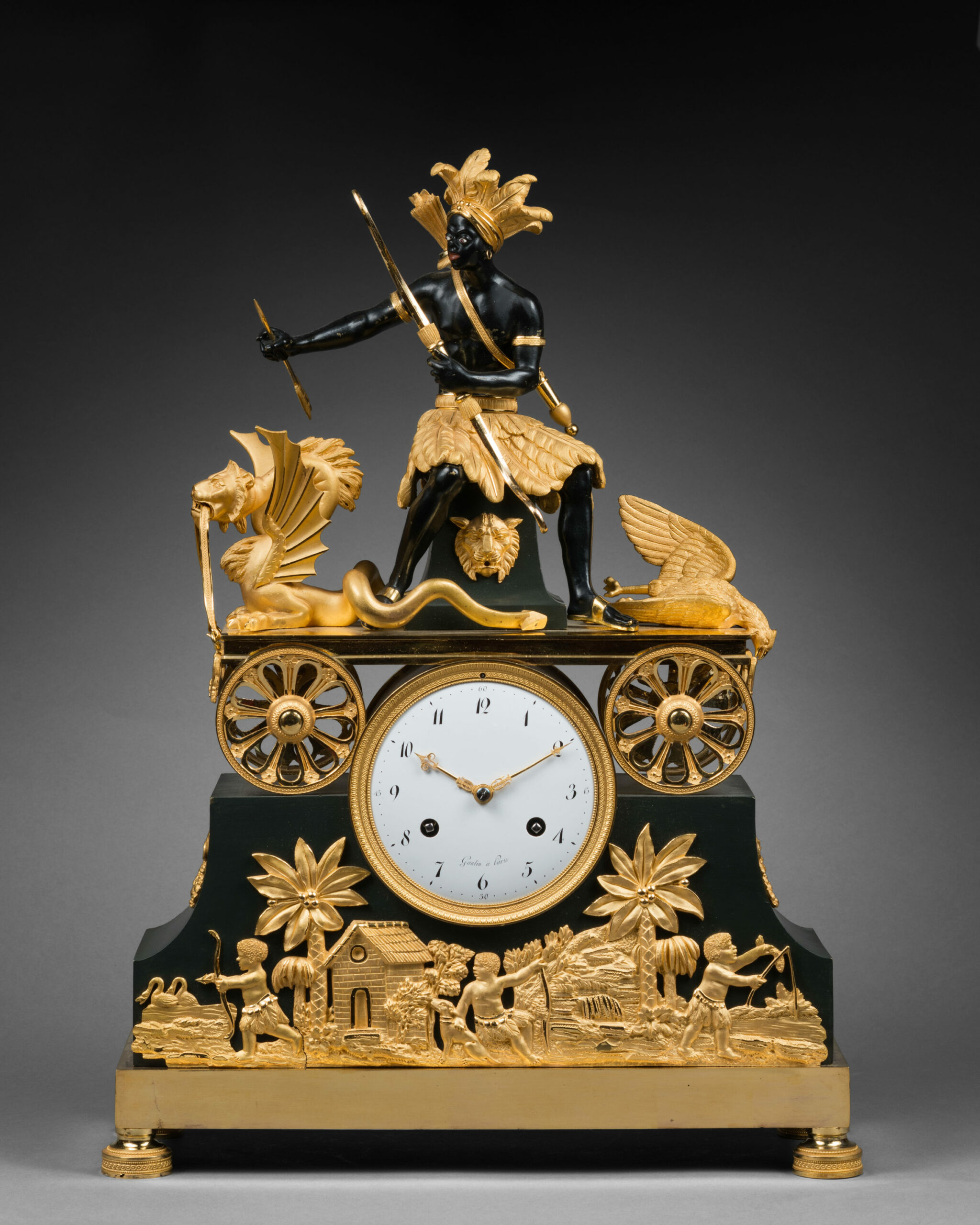 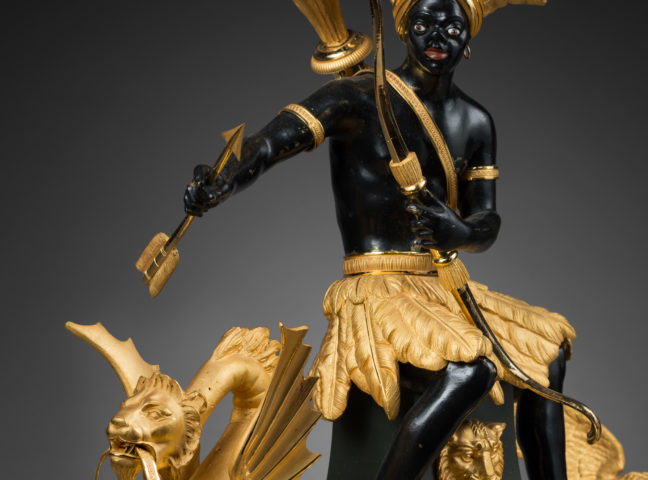 The round enamel dial, signed “Gaulin à Paris”, indicates the Roman numeral hours and the Arabic numeral fifteen-minute intervals by means of two gilt bronze hands. It is housed in a  finely chased gilt and patinated bronze case. The clock is surmounted by the figure of a black hunter wearing a feather headdress and loincloth, who holds a bow in his left hand and an arrow in his right, with a quiver of arrows slung across his chest. He is sitting on a pedestal that is decorated with a lion’s head and is supported on a chariot with four wheels that are decorated with pierced flower petals and is drawn by a chimera with a lion’s head and dragons’ wings, whose double tail ends in arrows; it holds the reins in its mouth. On the other side lies a dead eagle. The sloping quadrangular base is decorated with garlands hanging from pastilles, whose façade is adorned with an elaborate applied motif depicting a rocky landscape, a cabin, and palm trees, in which three young boys dressed in loincloths are hunting, fishing, and sitting with a dog. The oblong plinth is raised upon four flattened feet decorated with beading and double zigzags that are framed by guilloche work and centered by cabochons.

During the late 18th century, encouraged by the philosophical writings of Jean-Jacques Rousseau, who extolled the virtues of a return to Nature through the idea of the “noble savage”, the fashion for exoticism was encouraged by contemporary writers. The enormous literary success of works such as Bernardin de Saint-Pierre’s “Paul et Virginie” (published in 1788, it was a descendant of Daniel Defoe’s famous “Robinson Crusoe”), Marmontel’s novel “Les Incas”, which was published during the American War of Independence, and Chateaubriand’s “Atala”, published in 1801, profoundly changed Europeans’ attitudes toward other civilizations. They plunged the Old World into a deep romantic nostalgia related to the quest for a pagan Garden of Eden that would be regenerated by Christianity. 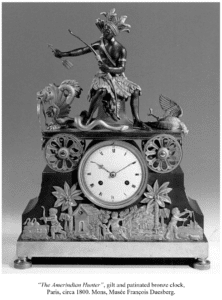 As was often the case in the French decorative arts, this upheaval was to have important repercussions that were reflected in certain artistic creations, and particularly in horology. This was the context in which the present clock was created. No doubt an allegorical representation of the discovery of the New World, it was offered in two versions. In the first, the figure is seated on a boat that is decorated with a wolf mask (one such model is illustrated in the exhibition catalogue “De Noir et d’Or”, Musées Royaux d’Art et d’Histoire, Brussels, 1993). The second type is that of the present clock; a few similar examples are known to exist. One such clock is in the Musée du Nouveau Monde in La Rochelle; a second example is illustrated in G. and A. Wannenes, Les plus belles pendules françaises, De Louis XIV à l’Empire, Florence, 2013, p. 315. One further such clock is in the Musée François Duesberg in Mons (see Musée François Duesberg, Arts décoratifs 1775-1825, Bruxelles, 2004, p. 59). 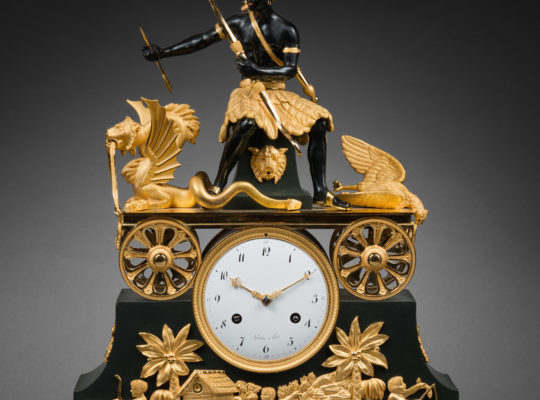 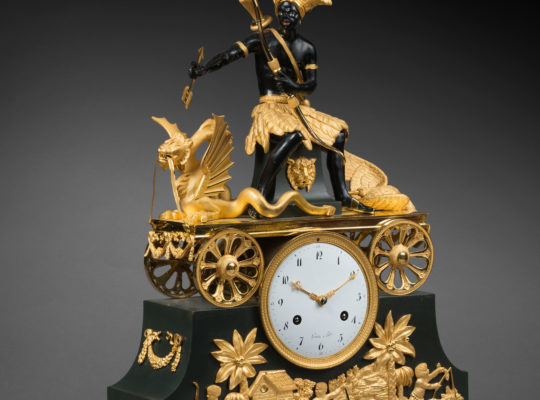 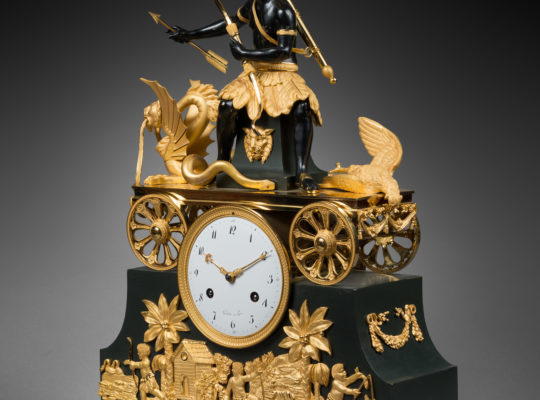 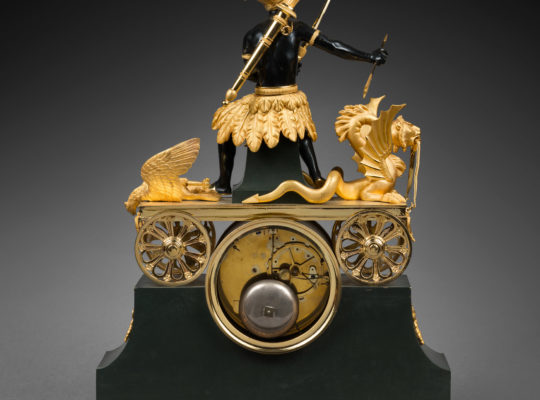 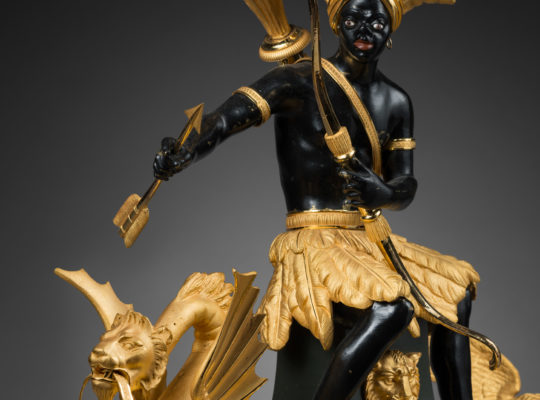 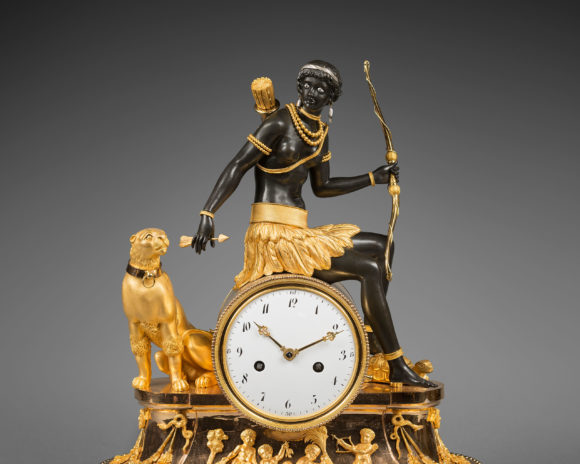 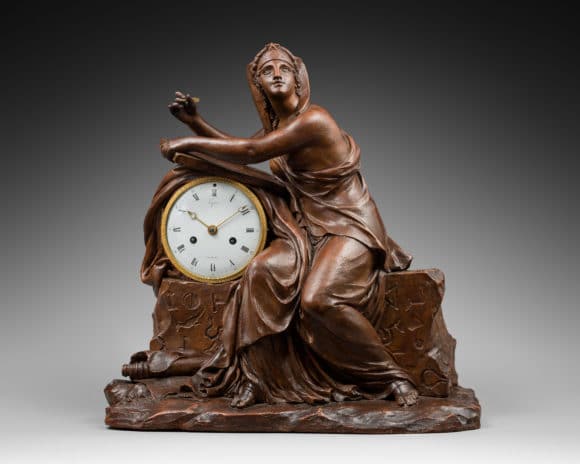 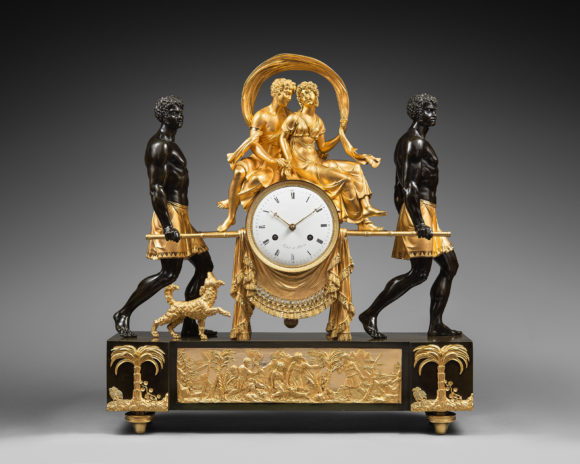 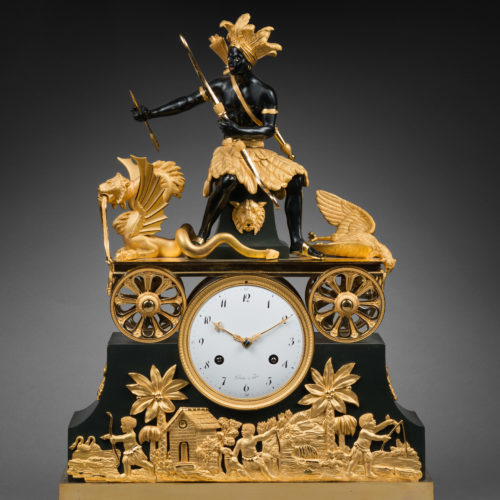