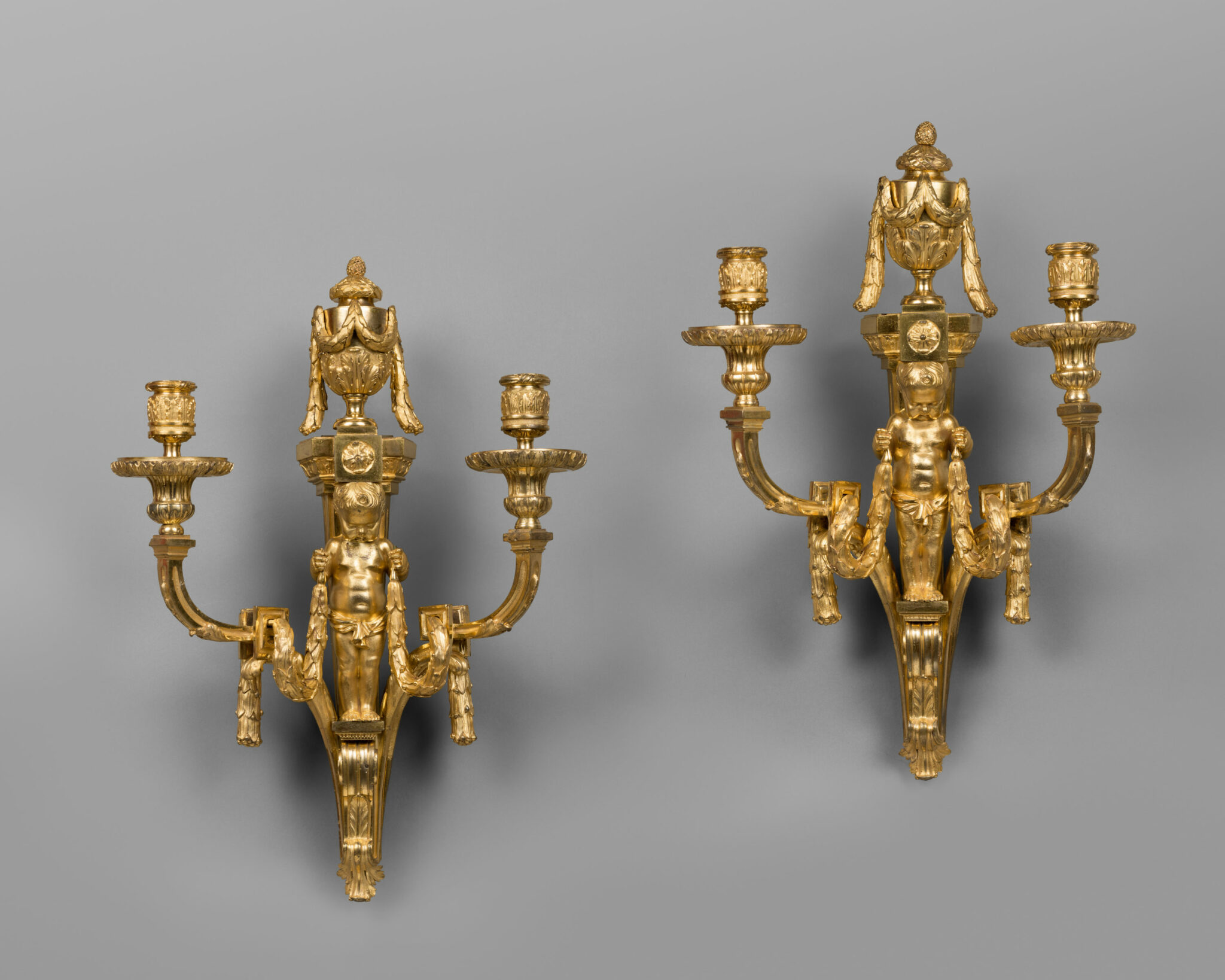 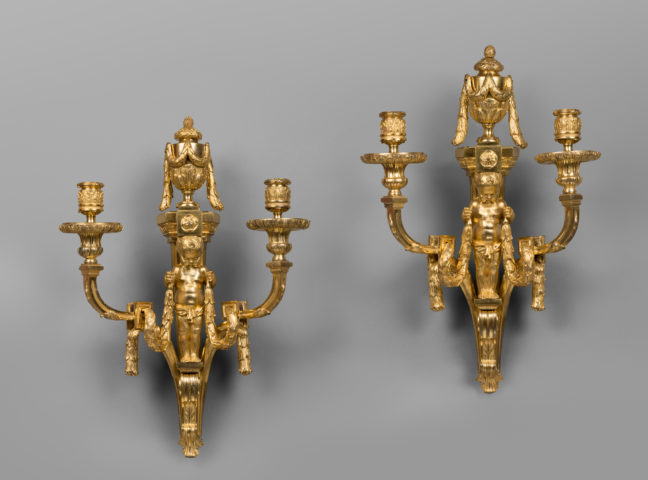 Made entirely of finely chased matte and gilt bronze, the wall lights feature a neoclassical stem with an acanthus leaf base and console sides, which issues the two deeply grooved light branches with leaf decoration. They support drip pans and nozzles that are adorned with leaf friezes. The stems feature a putto with a loincloth draped around his hips. The putti stand on an entablature and hold in each hand a laurel-leaf garland, which is threaded through the Greek key motifs that adorn the light branches. On the putti’s heads stand cubes that are embellished with rosettes; they protrude from an entablature supporting a vase decorated with acanthus leaves and flower garlands, whose lid has a seed finial.

This rare and important pair of wall lights is a perfect illustration of what today is called the “Greek style”, in reference to the neoclassical style initiated by several Parisian collectors of the mid 18th century, including the Count de Caylus and Ange-Laurent Lalive de Jully, as a reaction to the rococo style that had dominated the French decorative arts for several decades, which was considered old fashioned. The model was based on a drawing by decorator Jean-Louis Prieur, one of the leaders of the neoclassical style, which is now in a private collection (illustrated in H. Ottomeyer and P. Pröschel, Vergoldete Bronzen, Die Bronzearbeiten des Spätbarock und Klassizismus, Tome I, Munich, 1986, p. 173, fig. 3.5.3). This wall light model quickly became a great success among the great Parisian collectors of the mid 1760s. 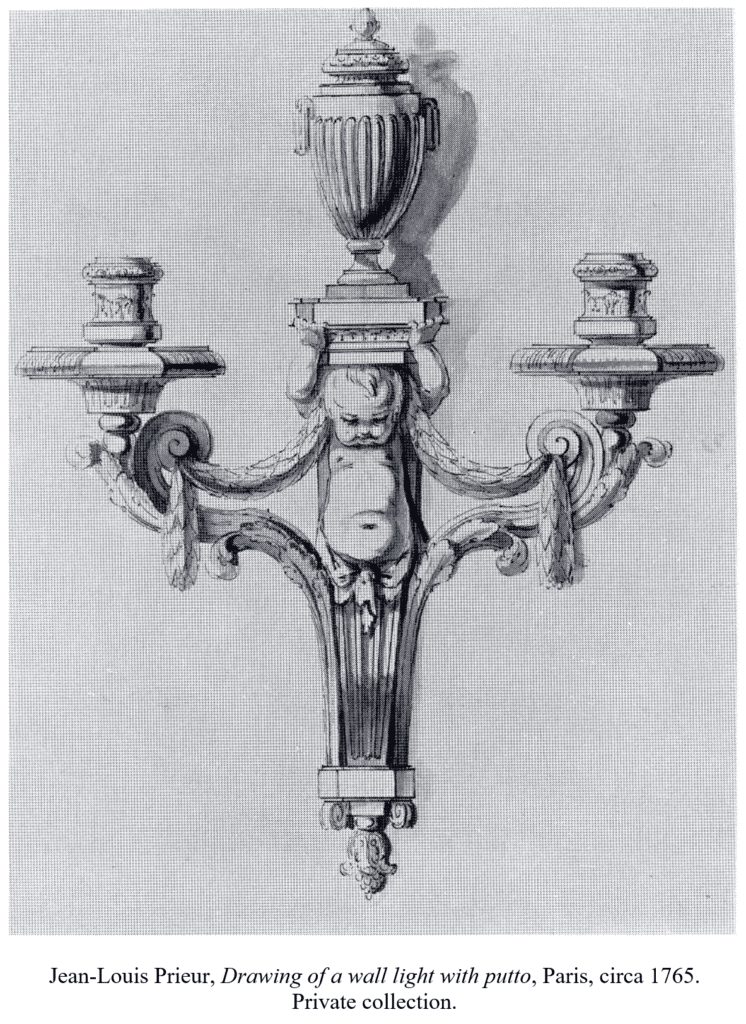 Today only a very small number of similar wall lights are known, featuring several minor variations in their decoration. Two similar pairs, three light branches, are known to exist; one such pair was offered at the sale of the collection of Madame Lelong (sold Paris, Galerie Georges Petit, Maître Chevallier, April 27-30 and May 11-15, 1903, lot 334). A second pair was in the collection of Joseph Bardac (sold Paris, Me Lair-Dubreuil, Galerie Georges Petit, December 9, 1927, lot 80). Another comparable pair with two light branches, like the present pair, was formerly in the collection of Eric von Goldschmidt-Rothschild (sold Berlin, Ball & Graupe, March 23, 1931, lot 364). It was no doubt either the “Rothschild” wall lights or the present pair that was described during the 18th century as belonging to the Farmer General Jean-François Leroy de Senneville, whose posthumous sale was held on April 26, 1784. It was listed as lot 173: “A lovely pair of light branches, with stem and the figure of a child who is holding garlands in his hands, they have two branches, and are very well gilded”. 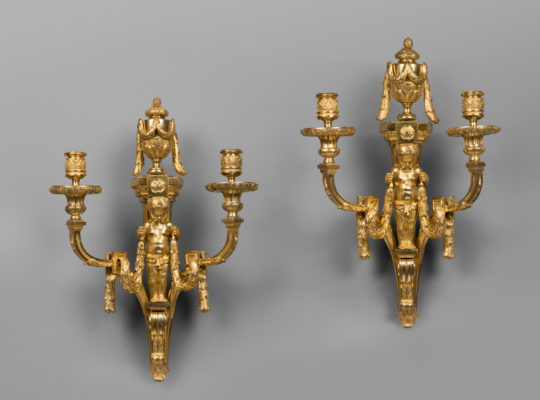 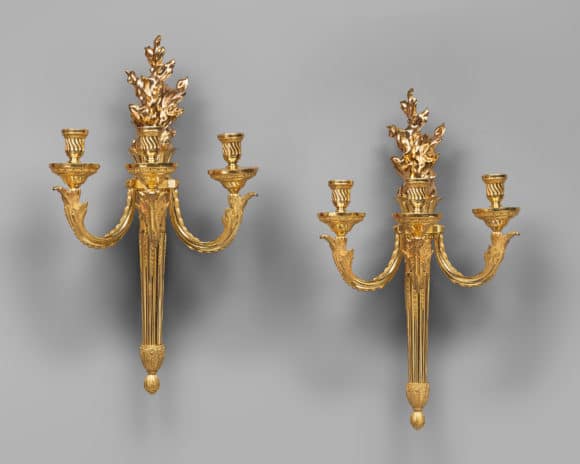 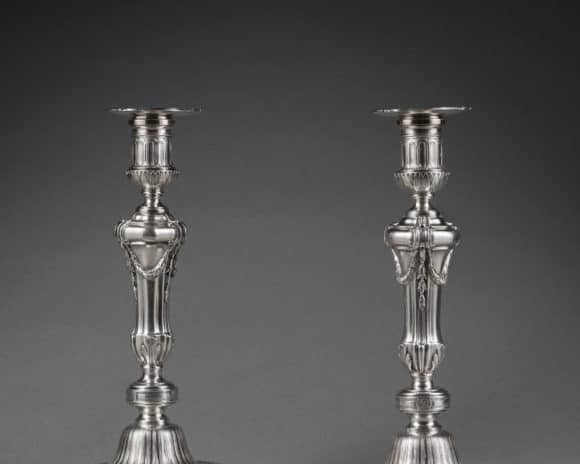 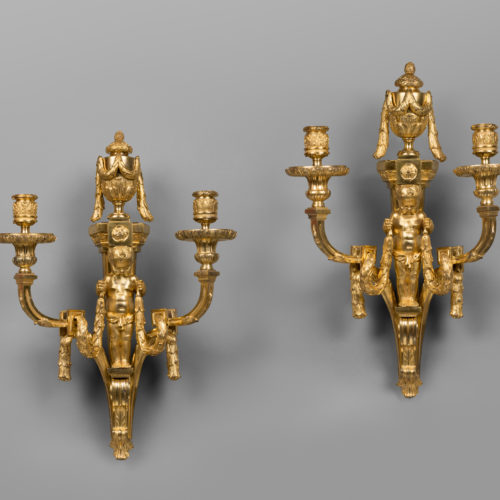