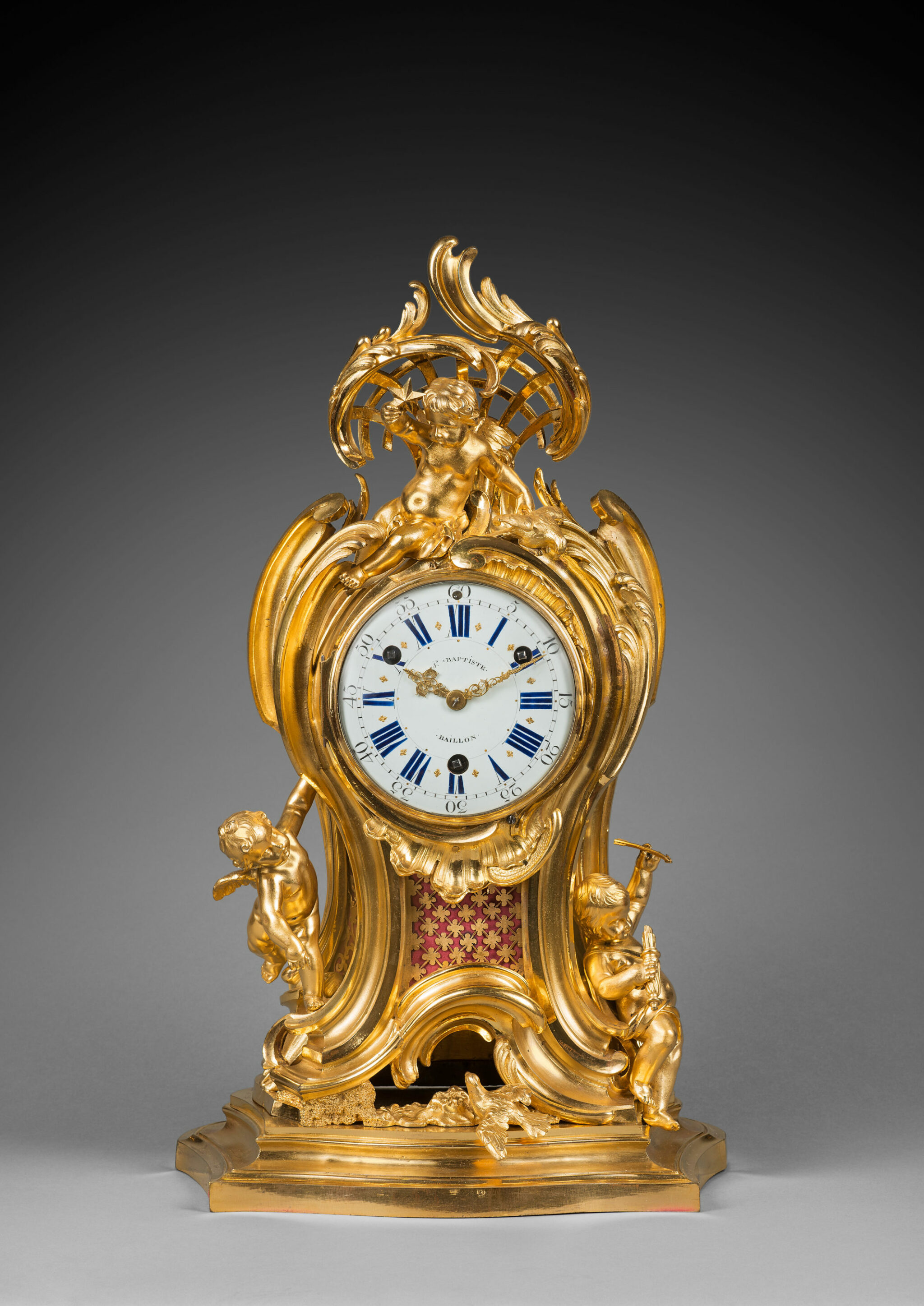 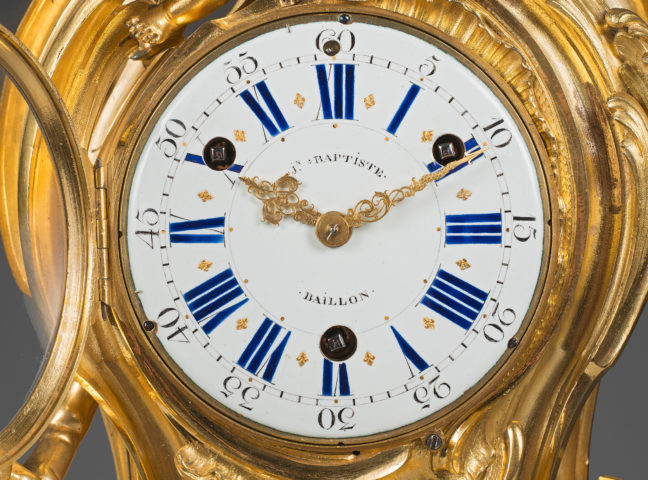 The round white enamel dial, signed “Jn. Baptiste Baillon”, indicates the Roman numeral hours and the Arabic fifteen-minute intervals by means of two pierced gilt bronze hands. The counter-enamel is signed “a.n. Martinière Pnaire (Pensionnaire) du Roy Ce 10 avril 1753”, which refers to the well-known Parisian enameler Antoine-Nicolas Martinière, who invented the one-piece enamel dial that revolutionized the appearance of Parisian clocks. The hour, half hour and quarter striking movement is housed in a magnificent rococo case that is made of finely chased gilt bronze with matte and burnished finishing. The clock is surmounted by an allegory of Daybreak, a winged Cupid holding a star, who is sitting under a latticework trellis that is adorned with C-scrolls, leaves and seeds. The sides of the case are decorated with C-scrolls and volutes. In the lower portion of the case there are two putti, one is holding a quiver and brandishing an arrow in his left hand. In the center there is a rococo motif featuring a dove sitting on a naturalistic rocky terrain. The shaped base is adorned with concave molding. The façade and sides of the case have reserves with trellis panels that are adorned with flowers, lined with burgundy-colored fabric.

The remarkable design of this rare mantel clock, along with the exceptional quality of its chasing and gilding, support our attribution to Jean-Joseph de Saint-Germain, one of the most talented Parisian bronziers of the reign of Louis XV. Today only a few identical clocks are known. Among them, one clock, whose dial is signed “Ferdinand Berthoud”, was formerly in the collection of Mario Crijns in Breda; it is illustrated in P. Heuer and K. Maurice, European Pendulum Clocks, Decorative Instruments of Measuring Time, Munich, 1988, p. 27, fig. 23. A second example is illustrated in P. Kjellberg, Encyclopédie de la pendule française du Moyen Age au XXe siècle, Les éditions de l’Amateur, Paris, 1997, p. 119, fig. D.


Antoine-Nicolas Martinière was an enameller and “Pensionnaire du Roy”. 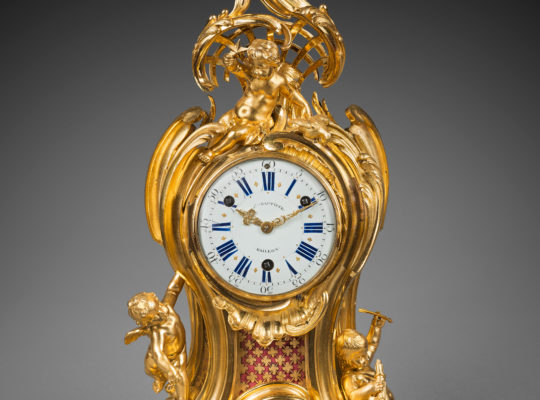 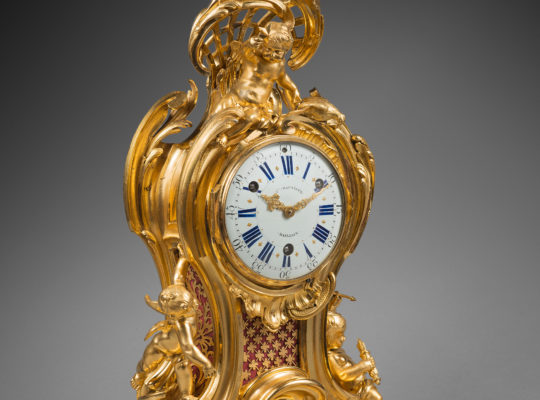 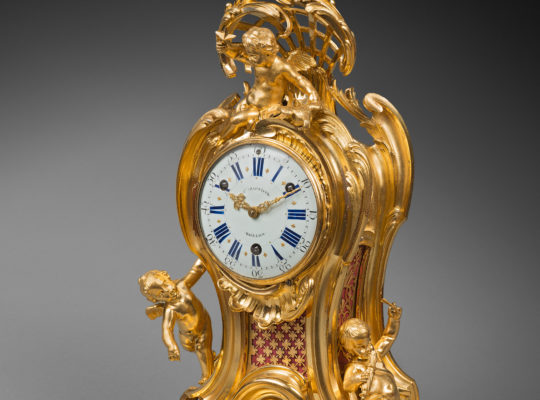 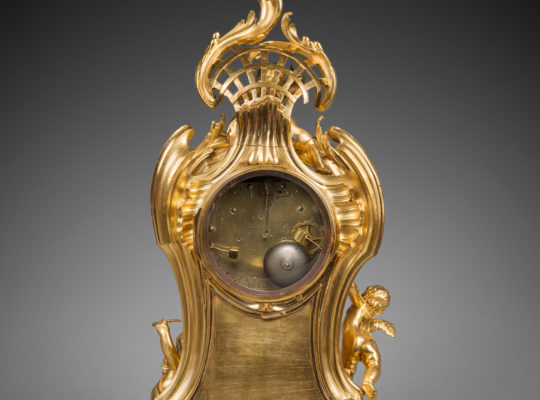 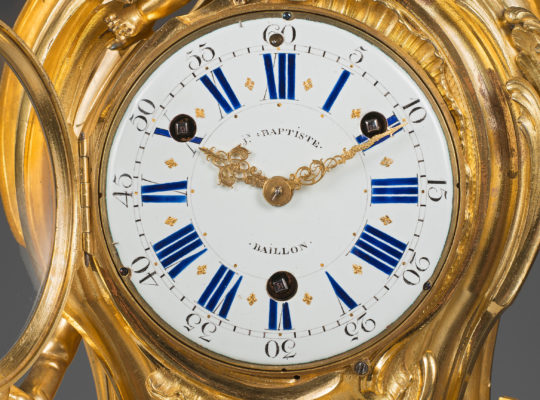 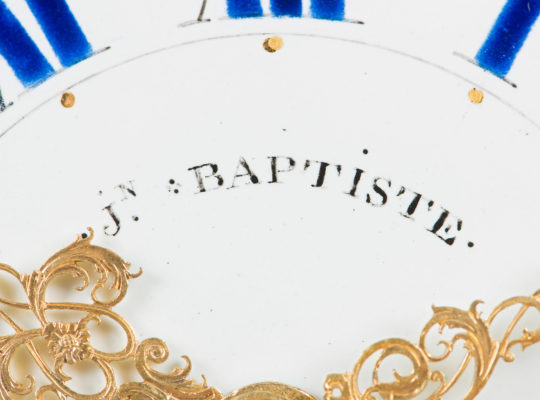 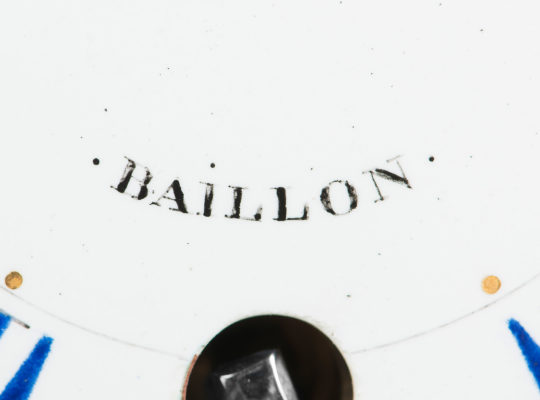 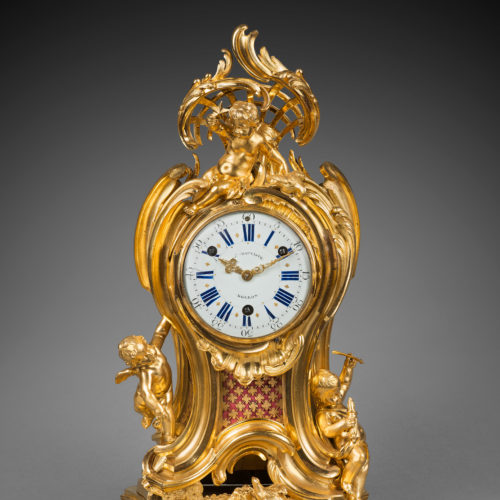