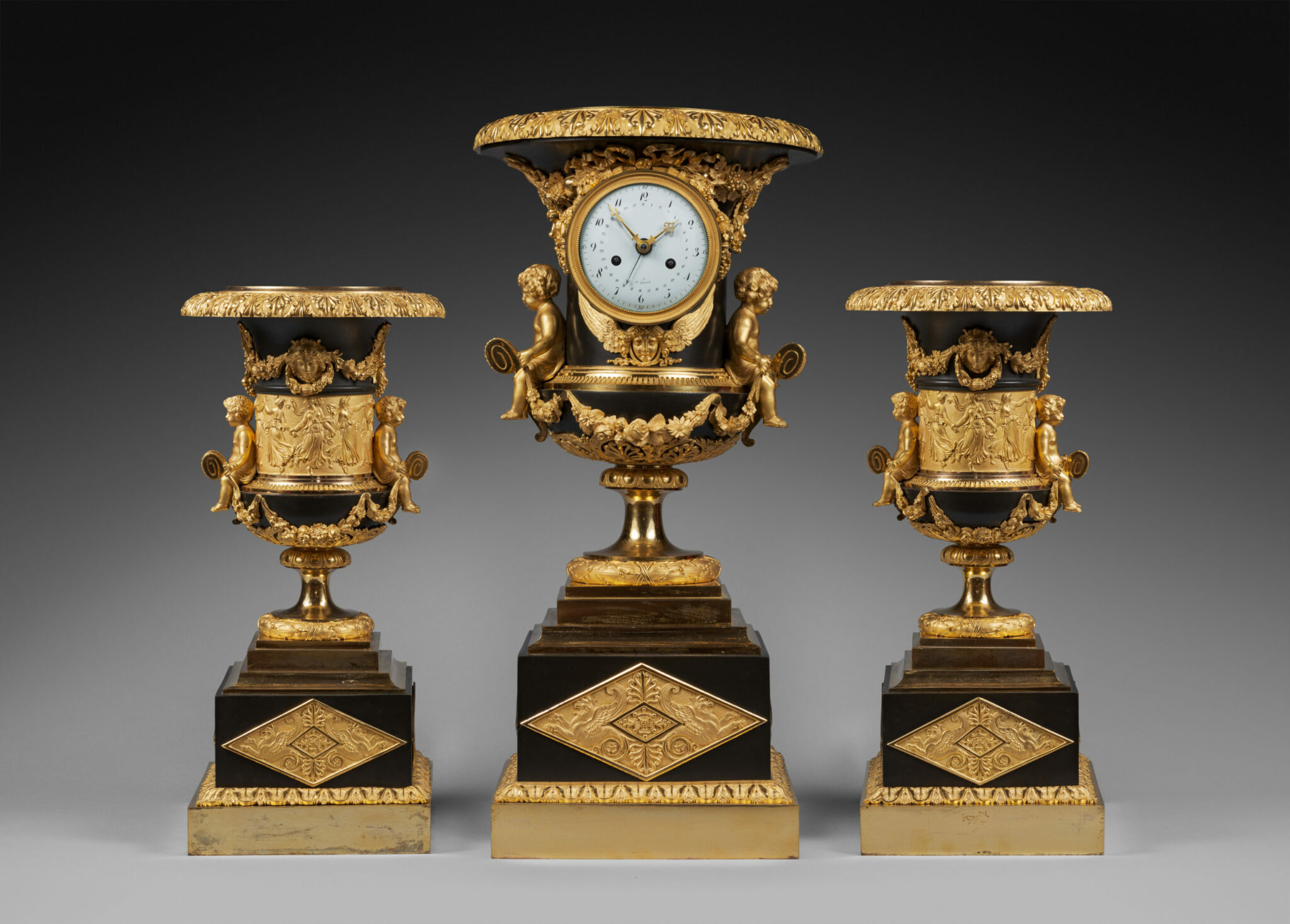 “Putti astride the Handles” 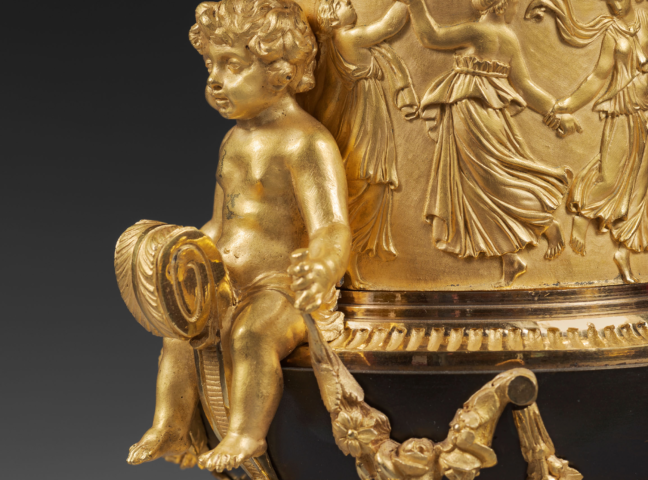 The present mantel garniture is made entirely of finely chased gilt and patinated bronze with matte and burnished finishing. It is composed of a central vase that contains the clock, and two lateral vases. The clock has a white enamel dial that indicates the Arabic numeral hours, fifteen-minute intervals and date, by means of three hands, two of which are made of pierced and gilt bronze. The hour and half hour striking movement is housed in a case in the form of a Medici vase. It is made of finely chased gilt and patinated bronze with matte and burnished finishing. The lip is decorated with a frieze of alternating stylized palmettes, oak leaves, and C scrolls; the upper part of the dial is adorned with ribbon-tied flower and leaf garlands; its lower portion is adorned with a mask flanked by outstretched wings; the scrolling handles support two putti who are seated astride the handles and hold leaf garlands that continue over the belly and are suspended from roundels. The lower portion is decorated with acanthus leaves and palmettes; the pedestal is adorned with a knop with stylized motifs and a ribbon-tied leaf and seed torus. It is set on a stepped entablature, which itself is set on a quadrangular base with a double lozenge motif that contains rosettes, palmettes, and facing griffons. The molded plinth features a frieze of lambrequins and water leaves alternating with foliage. The two similarly decorated lateral vases are notable principally for the wide Neoclassical bands that adorn their bellies and depict nymphs and bacchants holding hands and dancing.

The remarkable design of this garniture, and particularly that of the putti sitting astride the handles, as well as the exceptional quality of the chasing and gilding, are characteristic of the finest Parisian creations of the late 18th and early 19th centuries. While they have several features that are reminiscent of Louis XVI vases, including the magnificent toruses adorning the pedestals, and the flower and leaf garlands, they also present characteristics of the greatest creations of the Empire period, concerning, for example, the treatment of the chasing and the motifs of the bases. The harmonious and balanced blend of these two styles is typical of the transition period, in which the artistic and decorative tendencies came together during the passage from the 18th to the 19th century, that is, from the Directory to the Consulate. During this period, one bronze caster in particular became famous for his talent and his creative genius: Pierre-Philippe Thomire, the remarkable artisan to whom we attribute the present garniture. Thomire’s signature appears on a rare Medici vase made of gilt and patinated bronze, whose lip is similarly treated and whose belly features a comparable classical-style frieze. This vase, which is in the Decorative Arts Museum of Budapest, is illustrated in H. Ottomeyer and P. Pröschel, Vergoldete Bronzen, Die Bronzearbeiten des Spätbarock und Klassizismus, Band I, Munich, 1986, p. 362, fig. 5.12.3. 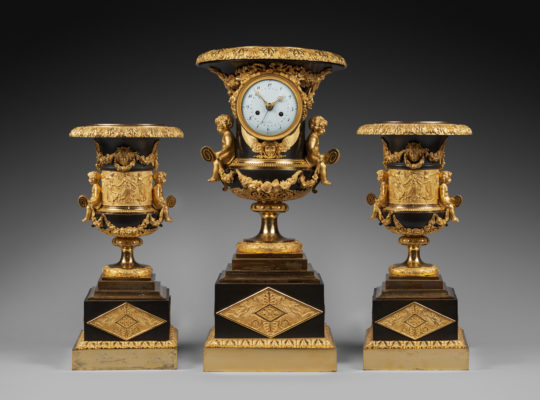 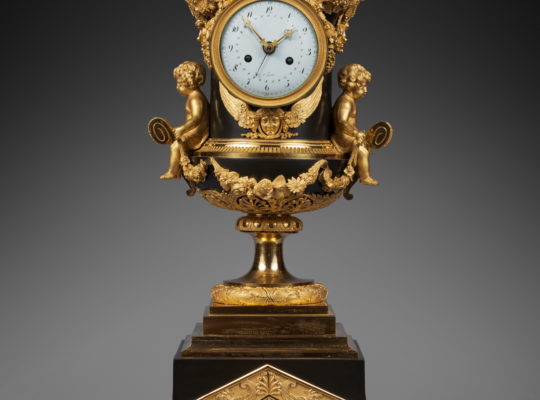 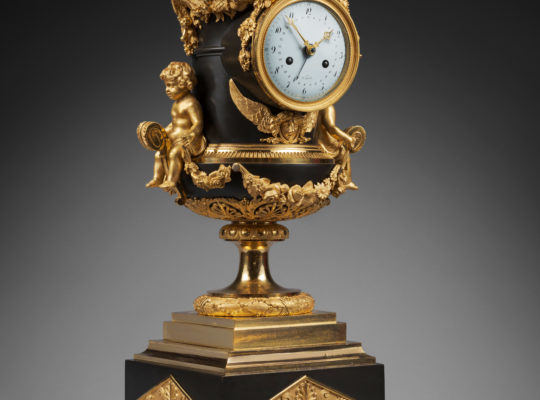 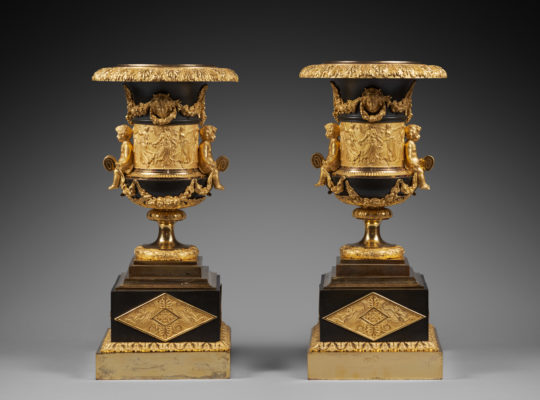 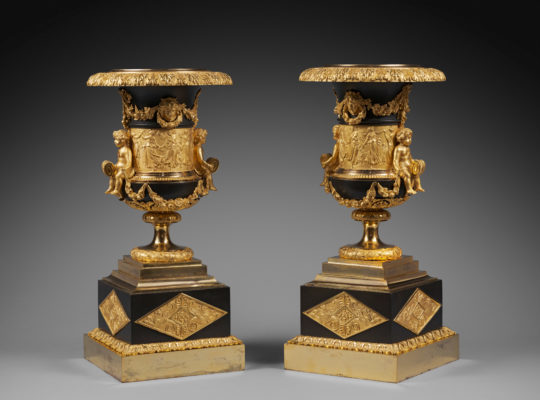 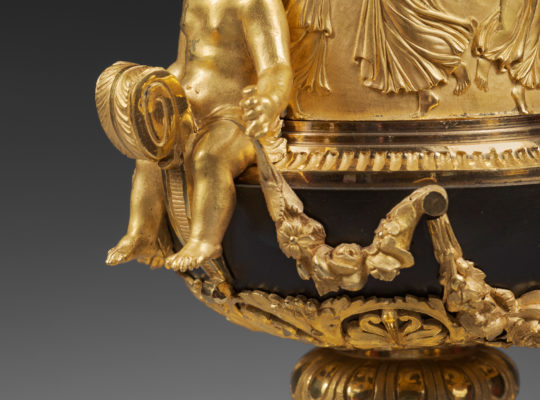 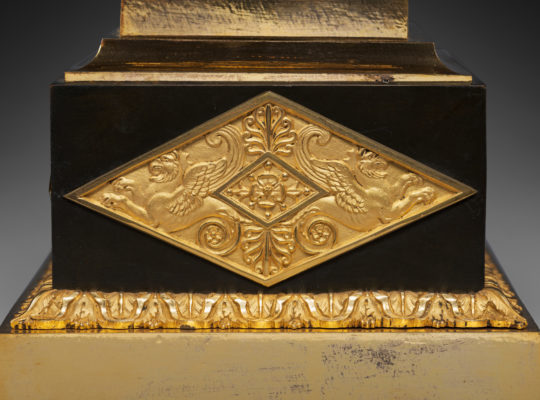 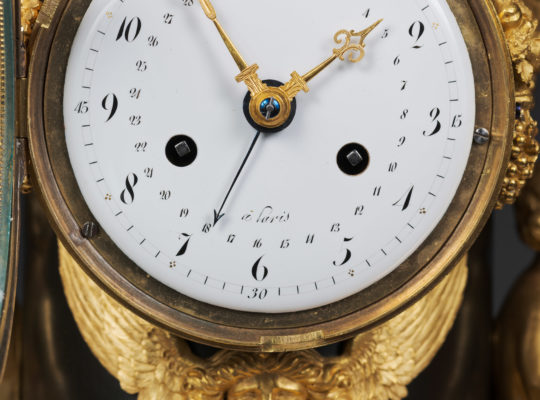 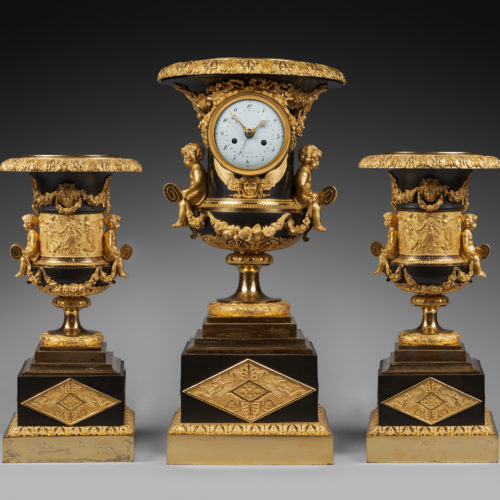