Was one of the most important Parisian clockmakers of the early decades of the 19th century. Born in Bourges, Moinet drew notice at a young age due to his passion for clockmaking, winning numerous first prizes and competitions. Also an enthusiastic painter and draughtsman, he stayed in Italy for several years, studying classical antiquity. When he returned to France, he settled in Paris and became a professor at the Académie des Beaux-Arts in the Louvre. A member of several artistic and scholarly societies, he became friendly, and collaborated with, many of the finest artists, artisans, and scientists of the time. His passion for clockmaking soon took precedence over painting and Moinet concentrated exclusively on the practical and theoretical aspects of clockmaking. He invented the first chronograph in 1816; ten years earlier he had designed an automaton clock for the Emperor, in which Napoleon and Josephine were crowned when the music box was activated. He also made pieces for Prince Murat and Marshall Ney. His fame spread beyond the borders of France, and Moinet designed clocks for American presidents Thomas Jefferson and James Monroe, as well as for George IV, King of England. Today the clocks made in his workshop are all thought to have been made in collaboration with Pierre-Philippe Thomire, with whom the clockmaker must have had a close commercial and personal relationship.

Discover the clocks and pendulums of Louis Moinet or Moynet 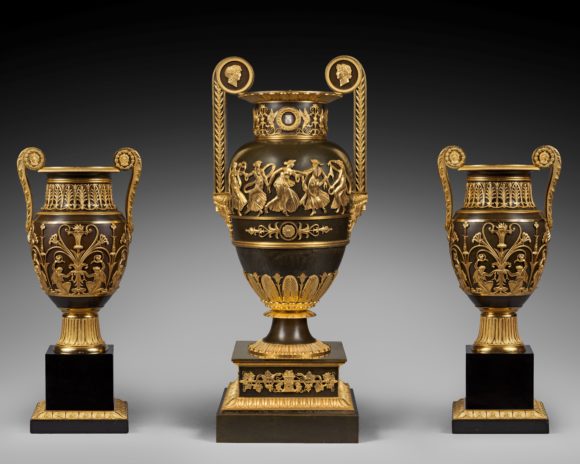 Moinet - Thomire
Exceptional Patinated and Gilt Bronze and Black Marble Mantel Ga...
Back
We use cookies to ensure that we give you the best experience on our website. If you continue to use this site we will assume that you are happy with it.Ok