Detouche, who was a recipient of the French Légion d’Honneur (1853) and the Danish Croix de l’ordre du Dannebrog, was official clockmaker to the city of Paris and the Emperor Napoleon III. His firm, probably the most important of its day in France, was immensely successful.

At the Nimes exhibition of 1862, the firm was described as follows: “the House of Detouche de Paris, founded in 1803; its business has increased annually and now retails in France and abroad more than 3 million francs worth of goods. In this figure, horology, from precision items to those for domestic use represent more than 1,200,000 francs. M. Detouche has already received the most prestigious awards; I will just mention: the gold medal at the Exposition Universelle d’Horlogerie at Besançon in 1860, and the gold medal in London in 1862. He was awarded La Croix de la Légion d’Honneur for his contribution toward the progress in horology that resulted from his work, the Croix de Dannebrog was awarded to him by the King of Denmark for his electric clock. Such items deserve to be described in a few details. They present improvements worthy to be known and appreciated by every clockmaker who has benefited from M. Detouche’s work and true service… The jury noted secondly a rocaille style regulator in gilt bronze of a remarkable taste, measuring 1m, 90; … The turnstiles placed at the exhibition and considered indispensable in France and abroad are also the invention of M. Detouche. All of the items shown by this company are to be noted for their modest prices, their elegance, their rich ornamentation and precision, and their skilled workmanship. The jury awards to M. Detouche a diplôme d’honneur.” (“Revue Chronométrique, 8th year, vol. IV, June 1862 – June 1863, “Exposition de Nîmes”, Paris, 1862, pp. 605-609).

In 1851, six years of Houdin’s joining the firm, Detouche exhibited at the Great Exhibition of London (the first universal exhibition), where they were categorised as “Chronometer makers, 158 and 160 rue St Martin, Paris” showing “Chronometers, large and small regulators, mathematical watchwork, watches etc”.

In 1887, toward the end of his life, Detouche funded the publication of the third edition of the “Traité d’Horlogerie Modern Théorique et Pratique” by Claude Saunier (1816-1896), also known as the C. Detouche edition (944 pages, published in Paris, and the addendum (112 pages, also published Paris).

Among Detouche and Houdin’s other prestigious creations, one should note two large astronomical regulators of differing designs, bearing numerous indications such as hours, minutes, seconds, days, months and their dates, sunrise and sunset time, the equation of time, moonrise and moonset, its phases along with its age, as well as the barometric and thermometric variations. On them the main dial is surrounded with fourteen subsidiary dials showing the time in fourteen cities across different latitudes. One of the two remained for a long time at the corner of rue Saint-Martin and rue de Rivoli and is now housed in the François-Paul Journe SA Manufacture, in Geneva. 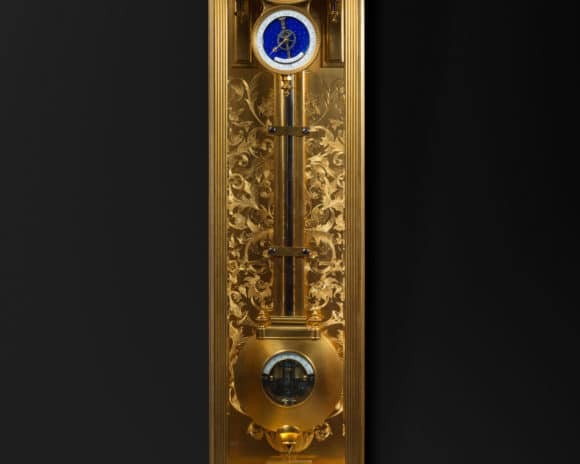 Detouche
Important Gilt Bronze Wall Regulator...
Back
We use cookies to ensure that we give you the best experience on our website. If you continue to use this site we will assume that you are happy with it.Ok