Better known as Henry Voisin, he was one of the most important Parisian clockmakers of the second half of the 18th century. The son of clockmaker Charles Voisin (1685-1761), he went into partnership with his father and then opened his own workshop, becoming one of the most renowned clockmakers of the French capital within just a few years. In the final years of the 18th century and the early years of the following century, certain of his clocks were mentioned as being the property of important Parisian connoisseurs. These include clocks mentioned in the inventories of Madeleine-Françoise-Louise-Elisabeth de Lorraine, Princess de Marsan, the Marshal of France Charles Duke of Fitzjames (in his wife’s probate inventory), the famous printer Pierre Didot, called “the elder”, and Victurnien-Bonaventure-Victor de Rochechouart, Marquis de Mortemart.

Discover the clocks and pendulums of Antoine-Henri Voisin 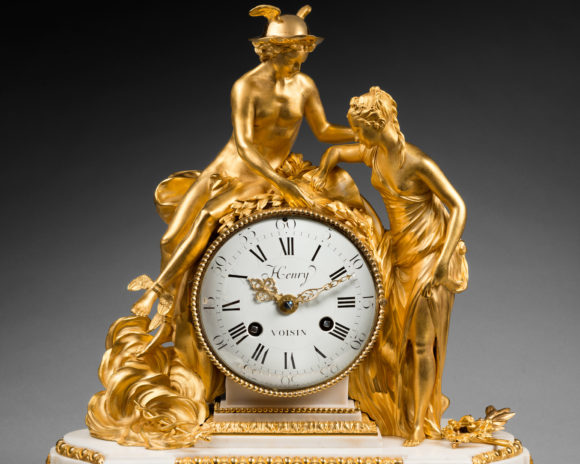 Voisin
Rare White Marble and Gilt Bronze Clock with Matte and Burnished...
Back
We use cookies to ensure that we give you the best experience on our website. If you continue to use this site we will assume that you are happy with it.Ok