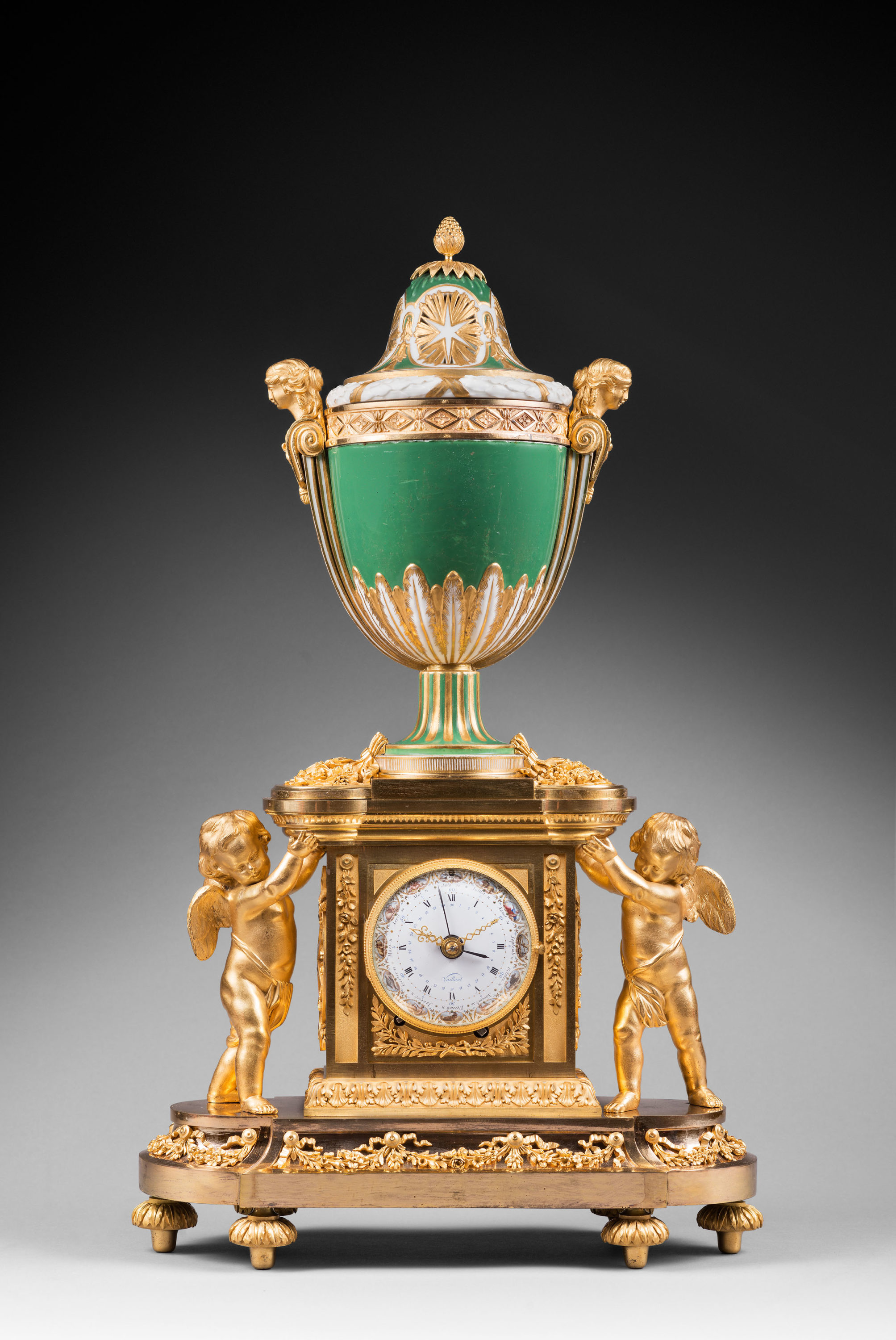 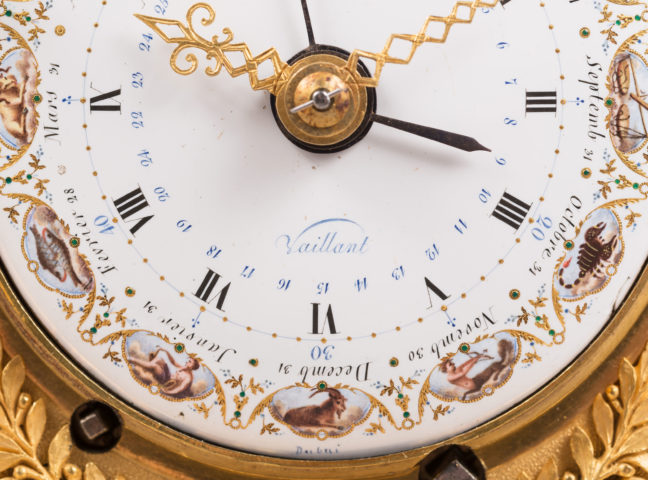 Undoubtedly Made under the Supervision of Dominique Daguerre

The round white enamel dial, adorned with polychrome cartouches painted with the signs of the Zodiac, is signed “Vaillant”. It indicates the Roman numeral hours, the Arabic numeral ten-minute intervals, the date and annual calendar by means of four hands, two of which are pierced and made of gilt bronze and two of blued steel. The movement is housed in a rectangular case adorned with garlands suspended from pastilles, ribbon-tied olive leaf swags, and medallions with stars set against sunray motifs. The lower portion of the case is adorned with a leaf frieze; it is surmounted by a canaux-decorated entablature that is supported by two lightly draped winged putti. The partially matted plinth is adorned with two flower and leaf bouquets placed on either side of a circular base, on which is set a magnificent green Sèvres porcelain vase that features white and gilt decorative motifs, including a ribbon-tied laurel torus, a geometric frieze of lozenges centered by flowers and a lid decorated with partially    pierced medallions featuring stars on sunray grounds. The lower part of the vase is adorned with stiff leaves; the pedestal is fluted. The lid is surmounted by a seed finial; the handles are formed by female busts adorned with scrolls, all of finely chased gilt bronze. The shaped base with sloping molding is lavishly decorated with ribbon-tied flower swags that are suspended from pastilles. The clock is raised on six feet that are finely chased with foliage.

This clock, which blends porcelain from the Royal Sèvres Factory and gilt bronze putti figures, may be considered one of the most luxurious examples of fine Parisian horology during the last quarter of the 18th century. Only a few similar clocks were made during this period. Among them, one example which is part of a garniture, is displayed in the Pavlovsk Palace in Saint Petersburg (illustrated in A. Kuchumov, Pavlovsk, Palace & Park, Aurora Art Publishers, Leningrad, 1975, p. 104). A second clock, whose gilt bronze base is signed “Osmond”, was formerly in the collection of Baron Edmond de Rothschild and is today in the Louvre Museum in Paris (shown in D. Alcouffe, A. Dion-Tenenbaum and G. Mabille, Les bronzes d’ameublement du Louvre, Editions Faton, Dijon, 2004, p. 132-133, catalogue n° 61). One further example, formerly in the collection of Prince Anatole Demidoff in Florence, is illustrated in P. Hughes, The Wallace Collection, Catalogue of Furniture, I, London, 1996, p. 513. 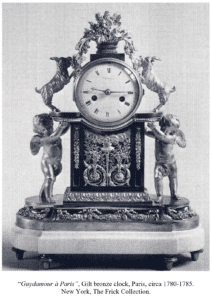 The present clock is a version of a much less elaborate model that was made of gilt bronze – that is, without the Sèvres porcelain vase. Several examples of this type are known: one example, in gilt bronze and white marble, formerly in the Russian Imperial Collection (see P. Kjellberg, Encyclopédie de la pendule française du Moyen Age à nos jours, Les éditions de l’Amateur, Paris, 1997, p. 240). A second piece, whose dial is signed “Guydamour à Paris”, is in the Frick Collection in New York (illustrated in H. Ottomeyer and P. Pröschel, Vergoldete Bronzen, Band I, Munich, 1986, p. 280, fig. 4.13.2). The unusual design of the present model suggests that the marchand-mercier Dominique Daguerre was involved in its creation. Daguerre had a near-monopoly on the orders placed with the Royal Sèvres porcelain factory, and had secured the services of the three finest Parisian bronze casters and chaser-gilders of the time, Pierre-Philippe Thomire, François Rémond and Pierre Gouthière. It is very likely that one of the three was the creator of the bronze case containing the movement made by clockmaker Jacques-François Vaillant, and whose enamel dial was the work of the finest contemporary enameler, Joseph Coteau.


Jacques-François Vaillant is one of the most important Parisian clockmakers of the late 18th century. After becoming a master on September 7, 1750 he opened a workshop in the Quai des Augustins, at the corner of the rue de Hurepoix, and quickly gained renown among the connoisseurs of fine horology. During the early years of the 19th century, his clocks are mentioned in the probate inventories of Charles-Marie-Philippe Huchet de la Bédoyère, Charles Jean-François Malon de Bercy, Charles-Eugène de Montesquiou-Fezensac and Jérôme-Joseph-Marie-Honoré Grimaldi, Prince de Monaco. 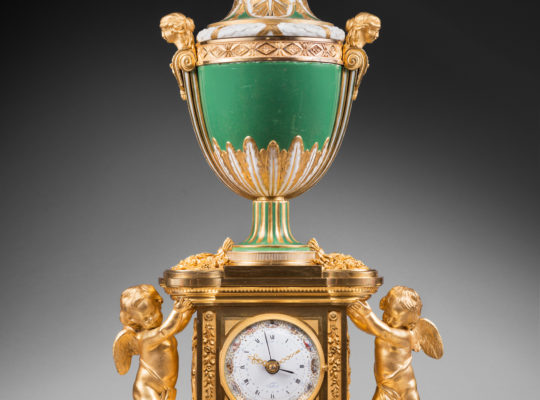 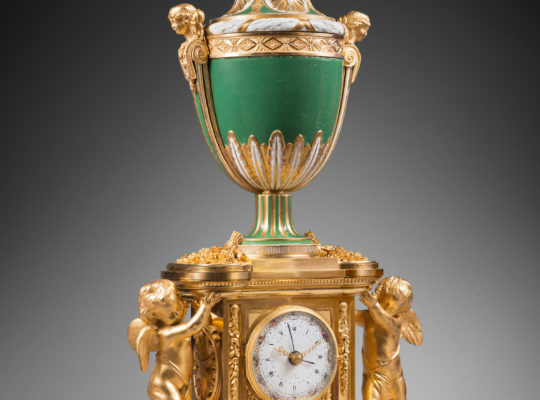 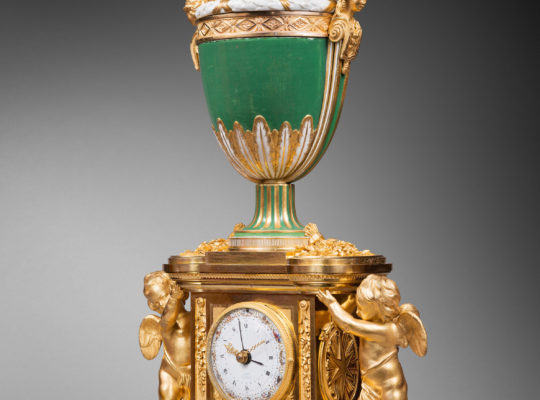 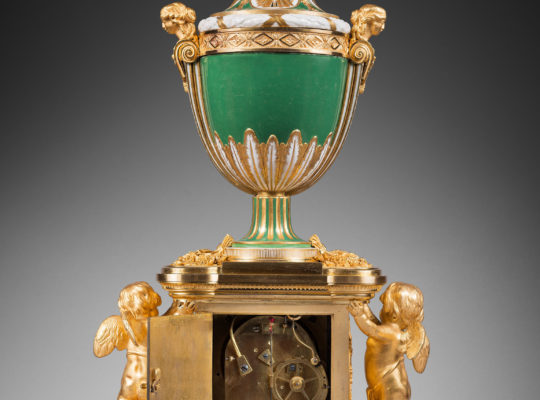 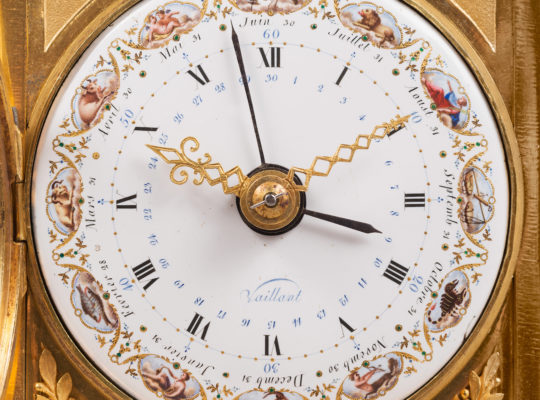 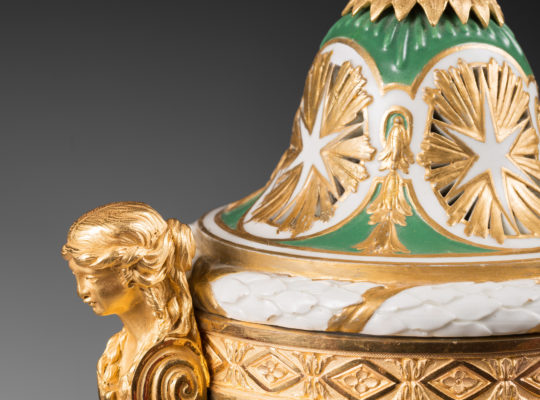 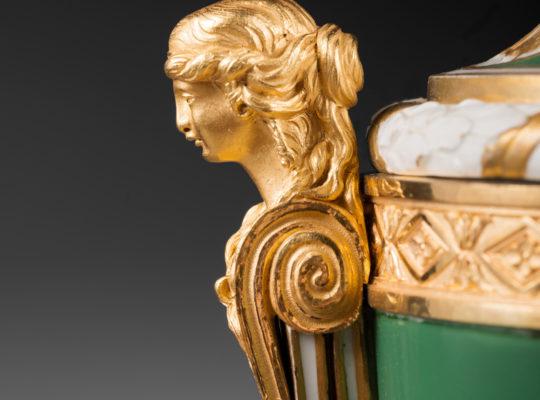 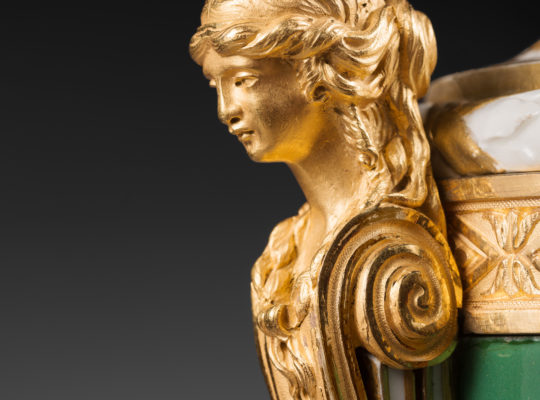 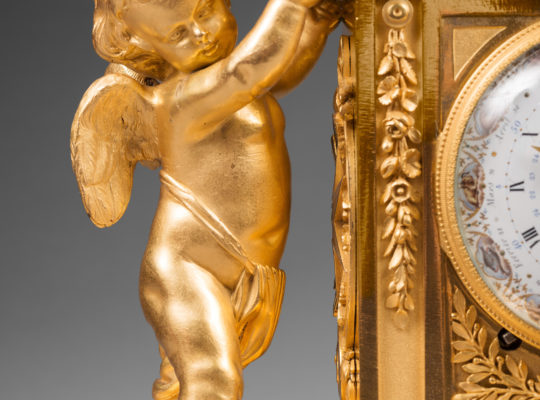 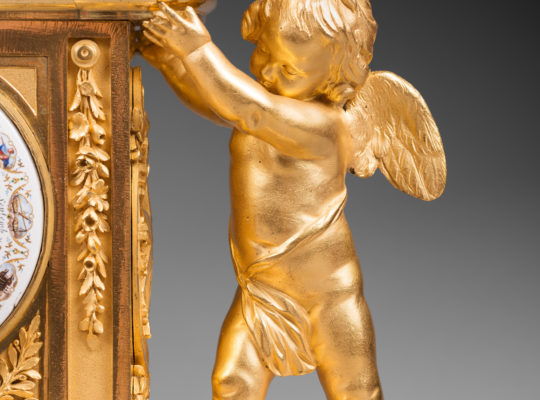 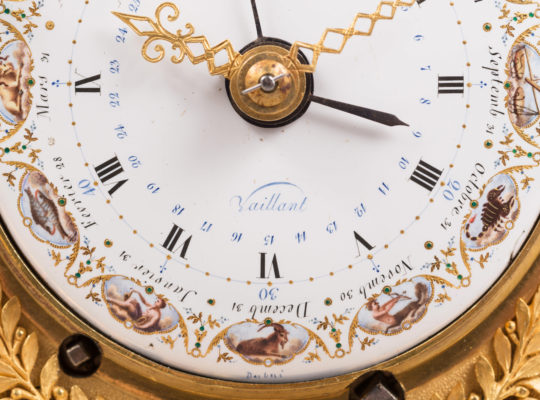 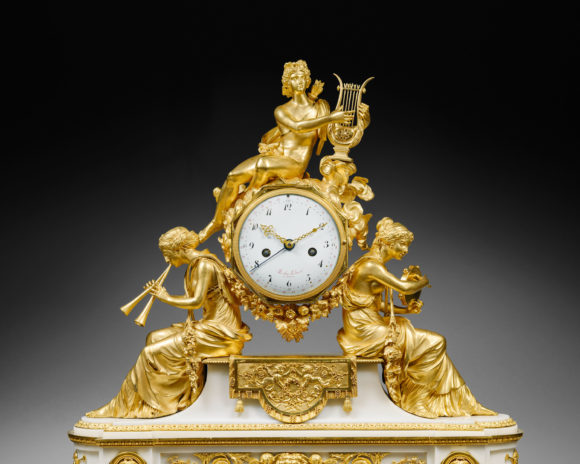 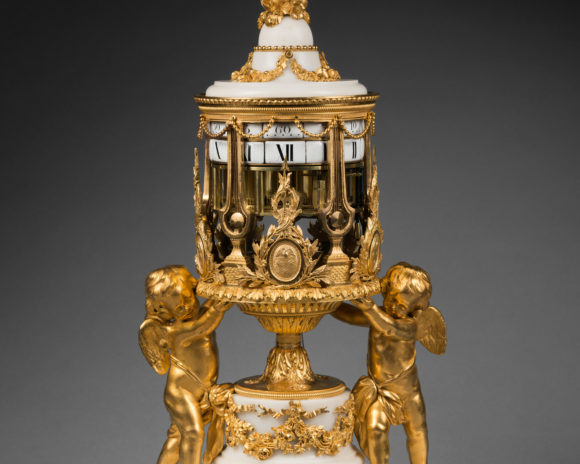 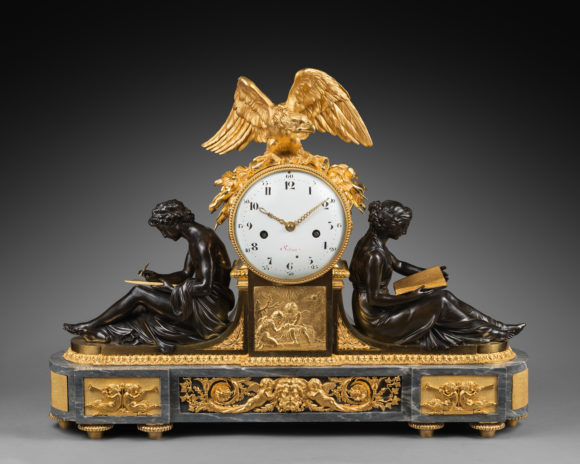 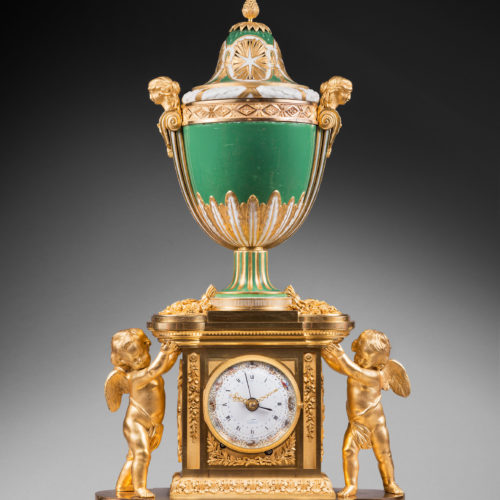