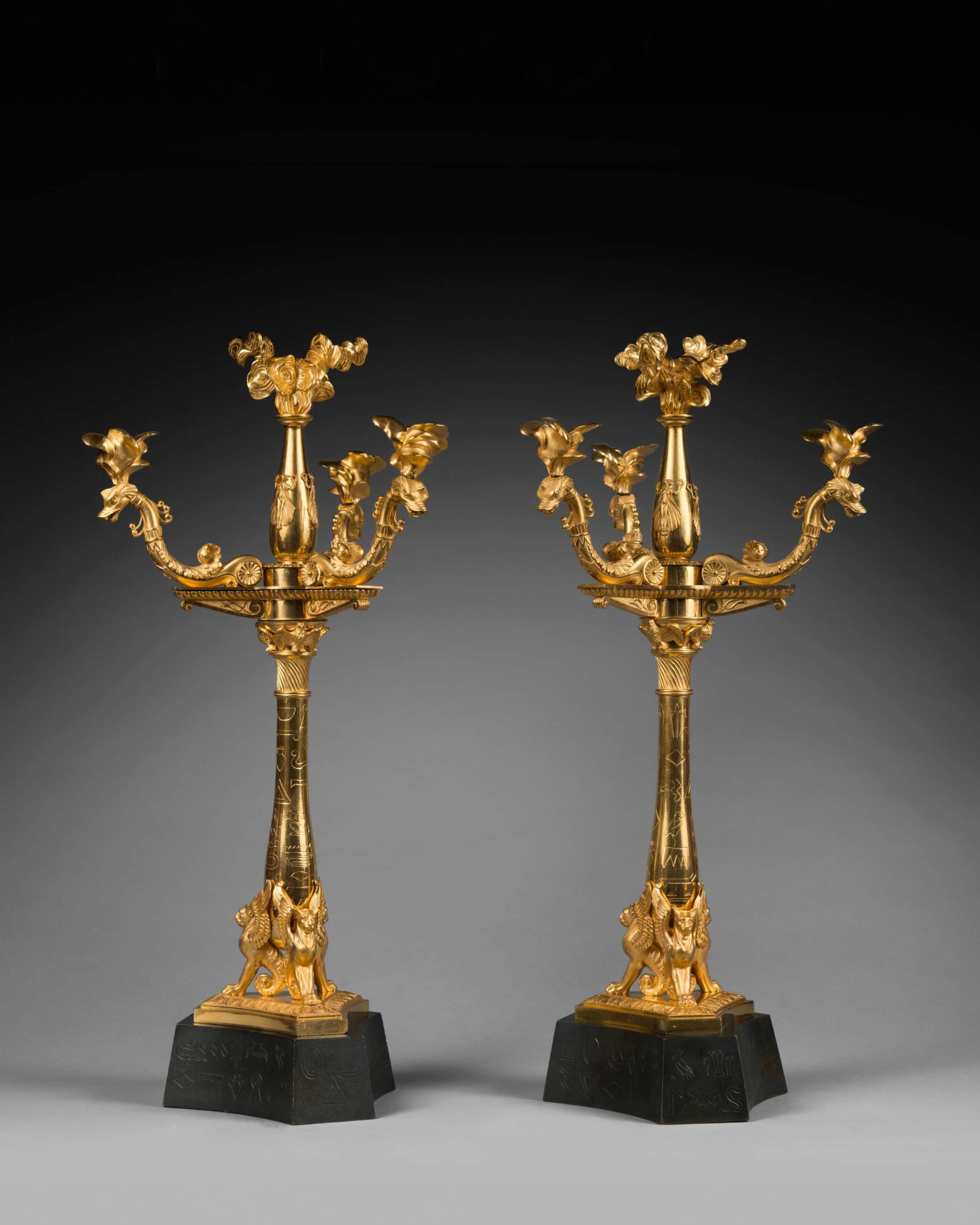 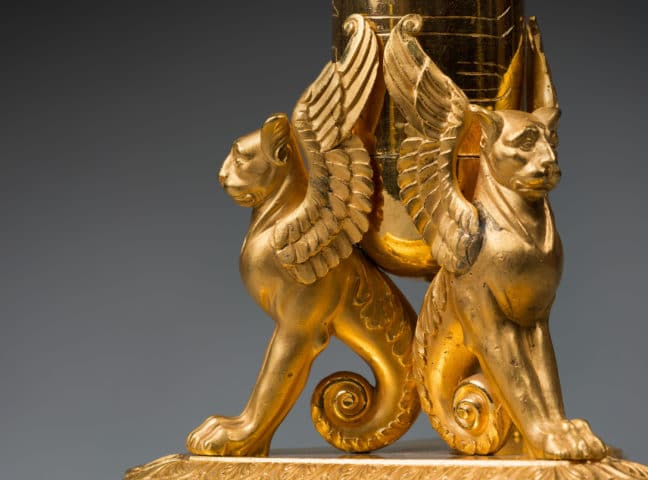 These finely chased candelabra, made of gilt and patinated bronze with matte and burnished finishing, feature baluster stems that are engraved with hieroglyphics, supported on the backs of three chimeras. The stems terminate in chapters with molded knops and bands of spiral fluting, which are surmounted by three owls with outstretched wings. The light arms, which issue from an entablature that is adorned with gadrooning and scrolling consoles, form three promontories to which are attached the three curved light arms, which are decorated with rosettes and acanthus leaves, and terminate in dragons’ heads that support the flame-shaped nozzles. The central baluster, which forms the fourth arm, is adorned with applied motifs of female figures holding wreaths. It terminates in a stylized cloud of smoke. The shaped and molded triangular plinths feature alternating friezes of flowers and palmettes; supporting them are bases that are engraved with hieroglyphs.

The remarkable composition of this rare pair of candelabra was influenced by two principal sources. The first was the “Egyptomania” trend caused by the Egyptian Campaign led by General Bonaparte, the future Emperor Napoleon, in 1798 and 1801. The Campaign included a group of scientists, historians, and artists. Upon their return to France, they made Egypt-based themes immensely popular, particularly in the field of the decorative arts, with many models and motifs based on the art of ancient Egypt. As concerns the field of lighting in particular, many candelabra were adorned with solemn female figures and hieroglyphs that were directly inspired by the monumental sculpture of ancient Egypt. The second important influence was that of the candelabra that were designed by the English decorator Thomas Hope (1769-1831), a pair of which is shown in Thomas Hope: Regency Designer, London, 2008, fig. 73.

The present candelabra, a perfect synthesis of these two influences, may be attributed to Louis-Auguste Hervieu (1765-1811), one of the most important bronze casters of the Empire period. Hervieux was highly respected; he worked with clockmakers such as Lepaute, bronziers such as Galle and Blerzy, and the painter Sauvage. He was particularly noted for his ability to create different types of lighting instruments based on preliminary models which he decorated using a vocabulary of basic motifs. In his work “Une nouvelle vision du bronze et des bronziers sous le Directoire et l’Empire”, in L’Estampille/L’Objet d’art, n° 398, January 2005, p. 80-84, Jean-Dominique Augarde studies several candelabra models created by Hervieu. Augarde’s article reveals that Hervieu was partial to owl motifs and regularly adorned his creations with them, as is the case for the present pair of candelabra. Among the small number of identical candelabra that are known to exist, one pair was offered at auction in Paris by Maîtres Couturier-Nicolay, on December 14, 1990, lot 35. Another pair was sold in Paris’ Palais Galliera by Maître Ader, on March 16, 1967, lot 65.


One of the most important bronze casters of the Empire period. Hervieu was quite famous in his day, and worked with clockmakers such as the Lepautes, the bronziers Galle and Blerzy, and the painter Sauvage. He stood out from among the other bronze casters of his time due to his ability to design many different types of light fixtures, which were based on a limited number of basic models and tended to share certain motifs. Several models of candelabra made by Hervieu were studied by Jean-Dominique Augarde in “Une nouvelle vision du bronze et des bronziers sous le Directoire et l’Empire”, in L’Estampille/L’Objet d’art, n° 398, January 2005, p. 80-84. 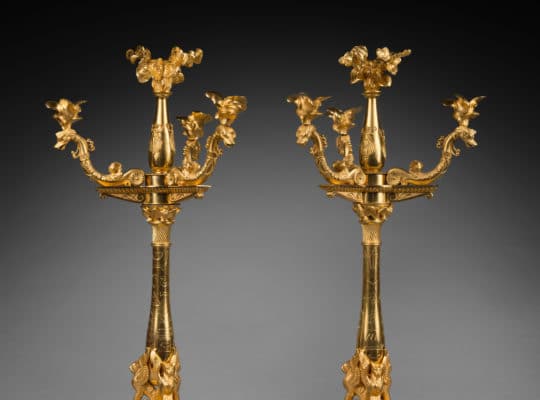 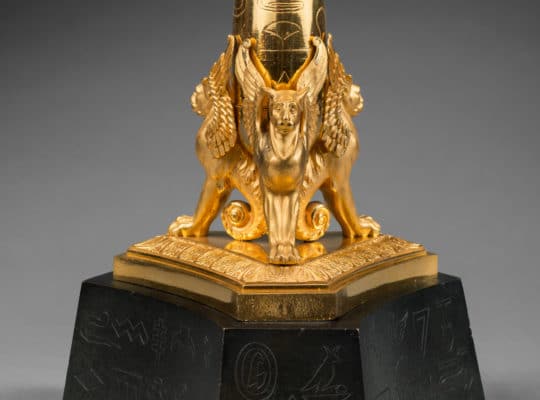 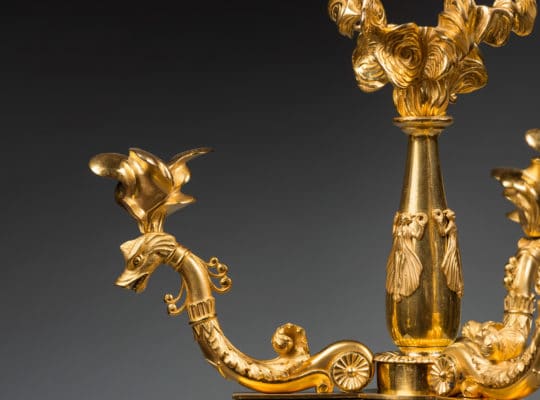 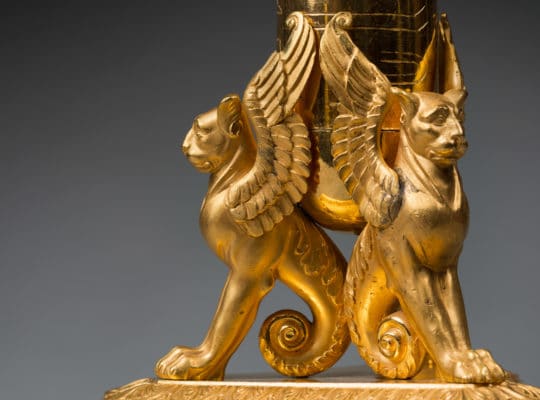 Write us
Call us
Print
Share
In the same category
Hervieu 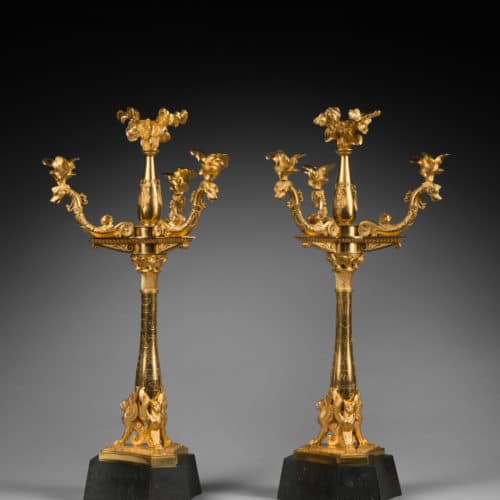