Victor Fleury is one of the most important Parisian clockmakers of the second half of the 19th century. He is recorded as working at 23, rue de la Paix in Paris. This clockmaker, cited as “Horloger de la Marine” on some of his creations, distinguished himself by his research and important contributions to the creation of a new type of escapement. The author of “Nouveaux principes sur le pendule appliqué à l’horlogerie…lettre aux horlogers, aux savants et aux amateurs de l’art”, published in Paris in 1865, Victor Fleury designed a particularly ingenious escapement that bears his name, making a half-seconds regulator whose escapement consisted in a small metal ball that moved freely within a small circular crystal basin only a few millimeters in diameter. Toward the end of his career he appears to have moved to the provinces: a gold box signed “Victor Fleury à Angers” that was sold at auction in Paris, bore the annotation “médailles aux grandes expositions jusqu’en 1867”.

Discover the clocks and pendulums of Victor Fleury 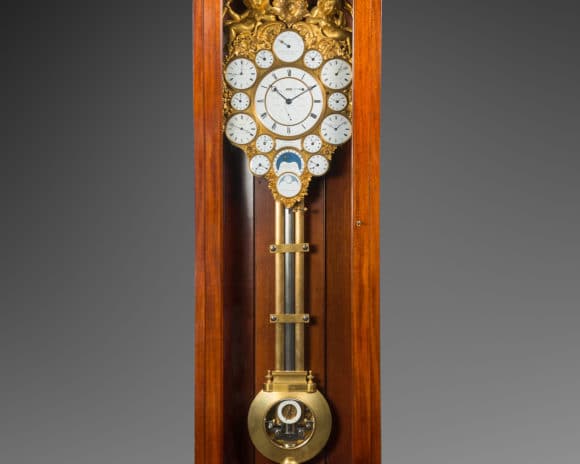 Fleury
Very Rare and Exceptional Astronomical Regulator...
Back
We use cookies to ensure that we give you the best experience on our website. If you continue to use this site we will assume that you are happy with it.Ok