Robert & Courvoisier is one of the best-known Swiss horological firms of the final years of the 18th century and the early years of the following century. It was born of the association of two horological families, the Roberts and the Courvoisiers. Josué Robert (1691-1771) established the family workshop in La Chaux-de-Fonds around 1715 and received the title of Clockmaker to the King in 1725. Having close family ties to the Jaquet-Droz and Sandoz families, he became famous for his inventions and numerous horological innovations, which helped make La Chaux-de-Fonds a very active clockmaking center. One of his sons, Louis-Benjamin Robert (1732-1781), worked in his father’s workshop and became its director after the death of his father in 1771; the company was called “J. Robert et fils”. In 1781, after the death of Louis-Benjamin, his son Aimé Robert (1758-1834) succeeded him and almost immediately (on April 30, 1781) went into partnership with Louis Courvoisier (1758-1832), the son of a Neuchâtel engraver, under the name “J. Robert et fils et Cie”. Aimé Robert was in charge of sales, seeking out commercial opportunities for their work throughout Europe. Louis Courvoisier was in charge of running the workshop and supervising production. In 1791, an inventory of the workshop mentioned hundreds of clocks, numerous employees, artisans and workmen, and highlighted the firm’s important commercial ties with Switzerland, France, Germany, Italy, and in many other European countries. At the time the company was known as “J. Robert et fils, Courvoisier & Cie”. The Napoleonic wars and political instability of the early years of the 19th century created great difficulties for the firm; the workshop decreased its production and concentrated its efforts on very high quality pieces that were destined for exportation. At the time the firm, then called “Robert Courvoisier & Cie”, dominated horological production, which was much decreased. In 1811, after Aimé Robert had retired, the company was known as “Courvoisier & Cie”. It remained active for nearly two more decades.

Discover the clocks and pendulums of Robert & Courvoisier 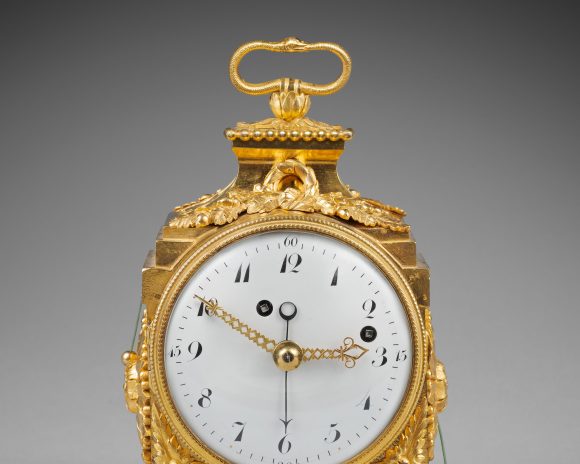 Robert & Courvoisier
Rare Gilt Bronze Pendule d’Officier...
Back
We use cookies to ensure that we give you the best experience on our website. If you continue to use this site we will assume that you are happy with it.Ok