Given his early horological training by his father, Antide Janvier furthered his knowledge with Abbot Tournier of Saint-Claude, who taught him Latin, Greek, mathematics and astronomy. The young boy soon revealed exceptional aptitude, being a quick learner, and skilled in restoration and design. In 1766, at the age of only 15, he constructed a moving sphere that he presented two years later to the members of the Besançon Academy of sciences, who were quite impressed. Later he studied with M. Devanne, constructing several planetary spheres, including one particularly remarkable one that resulted in his being presented to Louis XV. In 1783 the Count de Provence, the future Louis XVIII, named him “Horloger Mécanicien de Monsieur, frère du Roi”. The following year he presented Louis XVI with two astronomic clocks, receiving the title of “Horloger du Roy”. He survived the French Revolution and continued his activity, demonstrating great skill in horological and astronomical complications.

All the successive French regimes accorded him protection for the rest of his life. As of the reign of Louis XVI, by 1784, he had chambers in Versailles, and in 1786 he was awarded lodgings at the Hôtel des Menus Plaisirs du Roi, in the rue Bergère in Paris; the Revolutionary government gave him lodgings in the Louvre; and Napoléon, as First Consul, accorded him permanent lodgings in the Palais de l’Institut, overlooking the Seine.

In 1789 Louis XVI purchased an extraordinary astronomical clock from him, of which only a fragment has survived. Placed in the apartments of Louis XVI in the Tuileries, it was on display from 1793 to 1802, in the Museum’s Grande Galerie de Peinture. In 1802, it returned to the fourth salon of the Grands Appartements in the Tuileries palace, which had been Napoléon’s study. Louis XVIII had it transferred to the second salon, the Salon de la Paix, and Charles X returned it to the fourth salon. It remained in the Tuileries until its destruction in the 1870 fire that razed the palace. Janvier was responsible for its maintenance from 1789 to 1819.

Discover the clocks and pendulums of Antide Janvier 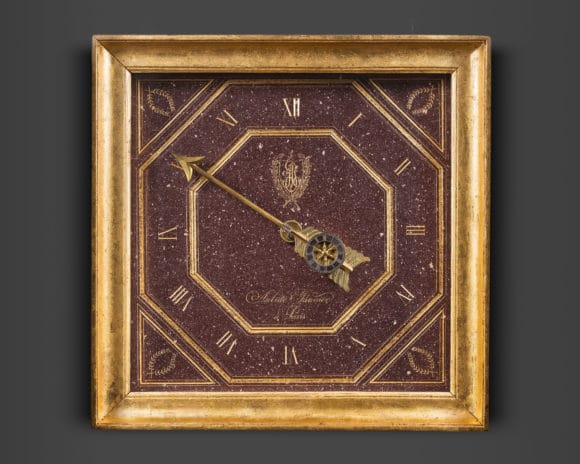 Janvier
Exceptional Wall Clock with Double Time Indication...
Back
We use cookies to ensure that we give you the best experience on our website. If you continue to use this site we will assume that you are happy with it.Ok