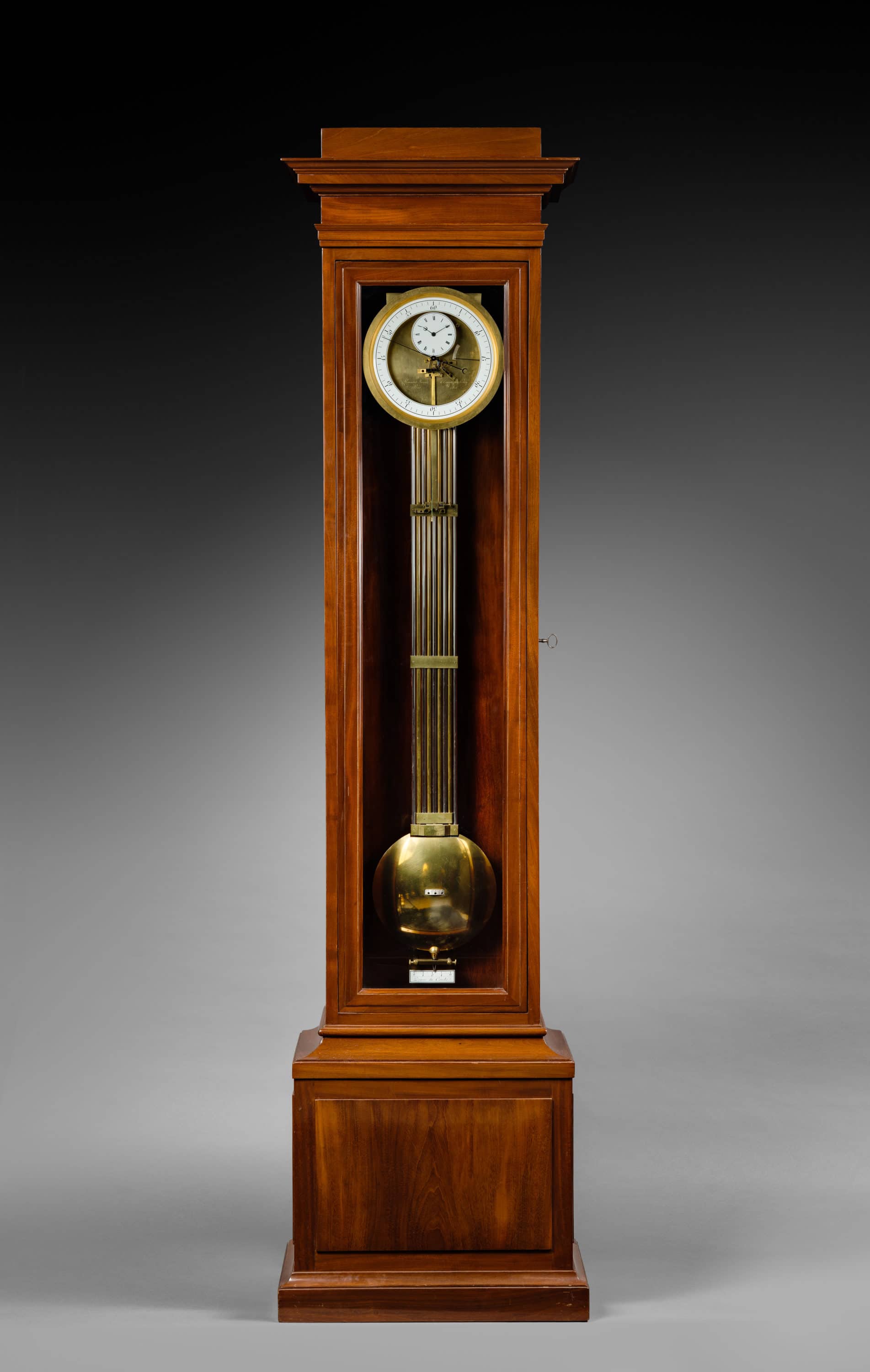 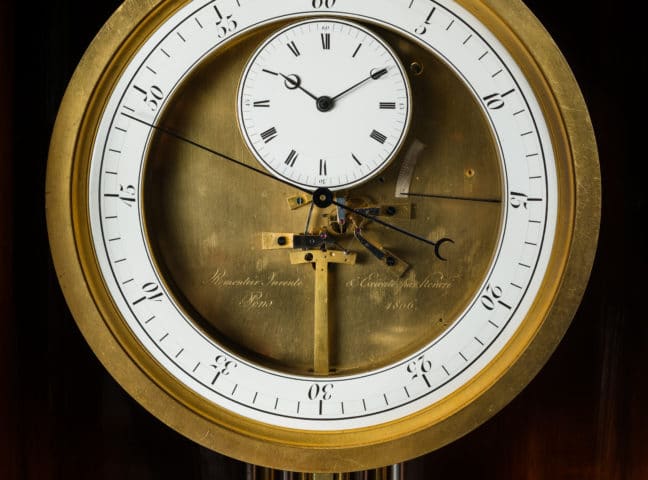 The enamel ring dial, with moulded bezel, indicates the five-second intervals with two-second graduations, by means of a central seconds hand; within this main ring dial another subsidiary dial indicates the Roman numeral hours and the fifteen-minute graduations by means of two blued steel hands; its copper or gilt bronze back plate bears the inscription “Remontoir Inventé & Exécuté par Honoré Pons 1806”. A crescent-shaped aperture in the plate is graduated from 0 to 14, indicating the 14-day power reserve. On the reverse, the dials bear the mark “Dub”, which is the abbreviated signature of Etienne Gobin, known as Dubuisson. A colleague and the principal rival of master enameller Joseph Coteau, Dubuisson was one of the most famous enamellers of his day. The movement is driven by a small weight weighing only a few grams. It serves as the driving force for the bimetallic gridiron pendulum with knife-edge suspension. An index on the bob indicates the “degrees of the circle” (les degrés du cercle) on an enamel plaque graduated twice from 0 to 2. The magnificent neoclassical mahogany and mahogany-veneered case features a protruding moulded cornice surmounted by a rectangular entablature that rests on an oblong trunk with a glazed door. The solid plinth with a protruding panel is set upon a quadrangular moulded base. Both the architectural design of this regulator and the excellent quality of its assembly and mahogany veneering strongly support its attribution to Ferdinand Schwerdfeger, a former cabinetmaker to Queen Marie-Antoinette who specialised in making clock and regulator cases during the Empire period.

The present regulator, an exceptional example of the remarkable movements produced by the inventive Honoré Pons, may be considered a true horological prototype. Pons was a brilliant clockmaker, a student of the Lepautes and Janvier, who worked closely with Berthoud and Lépine; he is without a doubt one of the finest horologists of his time. He was especially interested in escapements and once constructed a series of six escapements for demonstration. These pedagogical masterpieces, which Baron Armand-Pierre Seguier (1803-1876) presented to the Ecole d’Horlogerie de Paris in 1852, are today in the Musée des Techniques of the Conservatoire National des Arts et Métiers in Paris. Pons registered many patents for his inventions and improvements. He also took part in several important exhibitions where he was awarded numerous prizes, including silver medals at the Paris Exhibitions of 1819 and 1823, and gold medals at those of 1827, 1834, 1839 and 1844.

The present regulator bears witness to Pons’s interest in precision horology, an interest he shared with his mentor Antide Janvier (1751-1835). Its date, 1806, coincides with one of the clockmaker’s most prolific periods. That same year several of his pieces were particularly praised at the Exposition des Produits de l’Industrie française:

Presented several clocks, including one whose composition pendulum vibrates every half-second, with constant arcs, with an added detached escapement mechanism.

All the clocks presented by Monsieur Pons are intelligently constructed and perfectly executed; the regularity of their rate has been confirmed by astronomical observation.


Born in late 1773 in Paris’s rue Mouffetard, Honoré Pons showed an interest in science at a very early age. He was particularly fascinated by time measurement, which perhaps shows he was predestined to become a horologist. In 1789, after a course of serious study with the Jesuits in the rue Mouffetard, he began his training with the most brilliant horologist of the day, Antide Janvier. However, his studies were disrupted by the political and social unrest of the period; the Revolution soon broke out, with the result that craftsmen’s guilds became a thing of the past. However, Pons remained in contact with Janvier, who recommended him to the Lepautes; in 1798, he began working in their workshop – one of the most prestigious – as a clockmaker. He finished his training there and soon became interested in precision horology. In 1803 he opened his own workshop in the rue de la Huchette, near the Place Saint-Michel. Despite a promising start, Pons was obliged to continue to act as a supplier for some of his famous colleagues on the other side of the Seine, including Berthoud, Breguet and Lépine. This allowed him to continue working, while still having the leisure to pursue his obsessive quest to perfect time measurement. He invented several escapements and also created machines designed for cutting gear teeth and perfectly polishing pinion leaves. With the support of Ferdinand Berthoud, who was impressed by his inventive genius, Pons presented his Observations sur l’échappement libre to the Academy of Sciences in January 1804. His work was well received; the jury praised him in their report and the Academy congratulated the young horologist.

While Pons showed extraordinary promise during the early years of his career, at the same period the horological production of Saint-Nicolas d’Aliermont, a small city near Dieppe, was undergoing a serious crisis. The city specialised in the production of clock movements “en blanc” which were sent to Paris for finishing. The industry’s collapse was noted in a report which the Prefect Savoye-Rollin sent to the Count de Champagny, Napoleon’s minister in charge of the Fine Arts, Industry, and Commerce. Champagny immediately ordered the Académie des Sciences to find a competent horologist who might be able to revitalise Saint-Nicolas d’Aliermont’s horological industry. The Academy naturally designated Honoré Pons, who, in addition, possessed excellent tools and machinery. Duly contacted, Pons was initially sceptical. To encourage him to accept the mission, the French government offered to purchase his machines at a generous price, with the stipulation that they would be used in Saint-Nicolas’s future workshops. Finally, Pons accepted the offer, left Paris with his eight machines in tow, and upon his arrival, completely reorganised the production process in Saint-Nicolas. By June 1808, less than two years later, Pons had achieved his goal of producing exceptional quality movements. When asked by the Comité des Arts mécaniques to examine a clock movement Pons had presented to the Société des Arts, the famous horologist Breguet wrote:

“I myself have examined, with the greatest attention, the clock movement that Mr. Pons presented to the Société. I additionally asked the opinion of several honest and excellent clockmakers. We have together concluded that if this clockmaker continues to sell movements of the same quality for 40 F (francs), he will have greatly advanced the execution processes of this segment of horology, which must be efficaciously supported if we are to produce good quality clocks.

Mr. Pons’s movement is much superior to others of the same size, which sell for 50 F. It presents the further advantage of having well formed and regular teeth, which is extremely important, and which one unfortunately sees too rarely in serially produced objects. The frame of this clock is remarkably well assembled, the pinions are rounded and the rods well hardened.

It follows from the preceding that Mr. Pons has succeeded in making clock movements that he can deliver for approximately one-fifth less than the current price. They are much better made and of better quality than those that all the factories have produced until the present time. By thus perfecting this art, which has so many potential consumers, Mr. Pons has made himself directly useful to both commerce and the public, and therefore deserves all the encouragement the Société is able to offer.”

Several months later, Honoré Pons was again favourably mentioned the Academy’s traditional report to Napoleon Bonaparte on the progress of science in France:

“A few up-and-coming young people have already distinguished themselves by their remarkable talent. If the excellent art of horology does not succumb to the dangers that threaten it today, these young people will one day take the place of the great horological masters. The most remarkable of these young clockmakers is Mr. Pons. His escapements are very elegant; he loves his art; he is a thinker; his gear and pinion-cutting machine is a work of genius”.

Clearly, the pieces that Pons produced in Saint-Nicolas, then sold in a shop in Paris’s rue de la Barillerie on the île de la Cité, were of very high quality. All the great clockmakers came to make purchases in his Paris shop. Among his products, an unassembled movement called a “mouvement en blanc” or “blanc roulant”, consisted of two plates, the complete motion work, the striking work (without timbre), the barrels and the timing train, with an unfinished escape wheel. The movements, purchased in the rue de la Barillerie, were then finished by Parisian clockmakers who selected the model and escapement toothing, assembled the movement and housed it in a case, thus creating a “pendule de Paris”, or “Paris clock”.  Within just a few years, Pons made the Saint-Nicolas d’Aliermont factory the largest French supplier of “blancs roulants”. He was esteemed by his peers and by connoisseurs of fine horology, and in 1839 was awarded the Croix de la Légion d’Honneur by King Louis Philippe. In 1846, at the end of a brilliant career, he sold his firm to Borromée Délépine and retired, living in an elegant Parisian mansion at 20, rue Cassette. 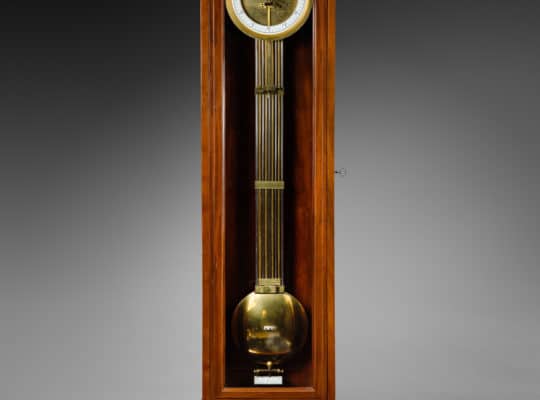 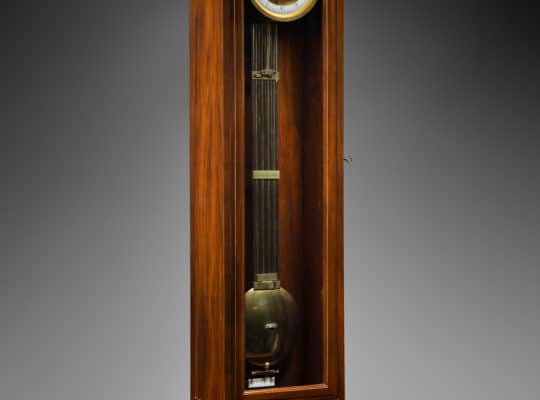 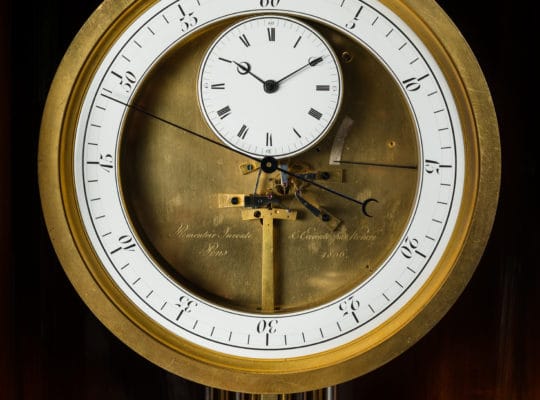 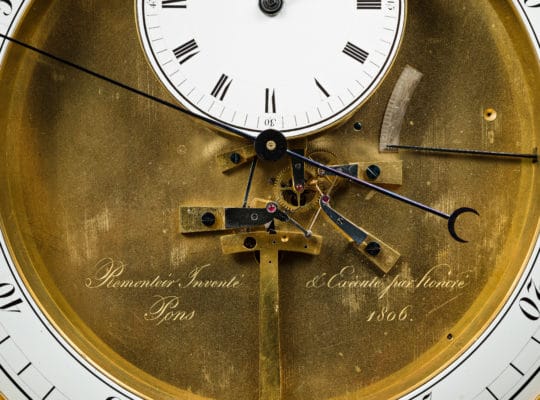 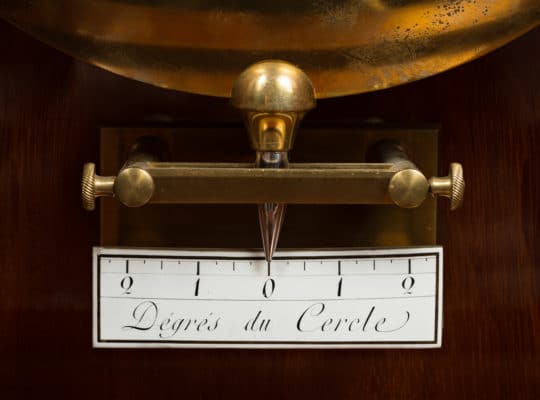 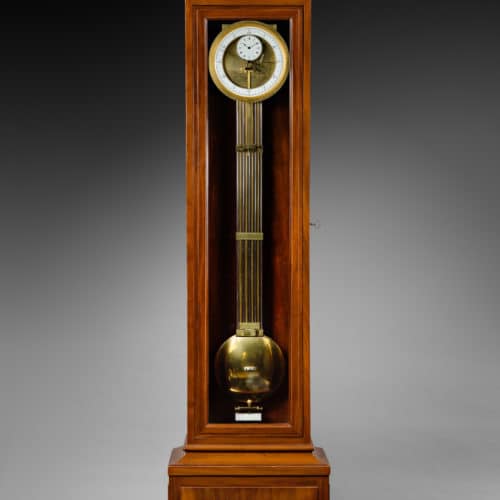