The clockmaker Pierre Gavelle (who signed “Gavelle l’aîné”), was the son of Jean-Jacques Gavelle and the brother of Maurice-Jacques Gavelle, also clockmakers in Paris. All three were active in Paris during the second half of the 18th century. After becoming a master, on September 4, 1771, he worked in his father’s workshop until 1787, then opened a workshop in rue Saint-Denis, moving to the rue des Juifs in 1801 (see Tardy, Dictionnaire des horlogers français, Paris, 1971, p. 251). A deputy of the guild in 1785, he became rather well-known and several of his clocks were mentioned during the early decades of the 19th century, as belonging to Parisian collectors of the day, including the printer Jacques Delatynna and Alexandre-Pierre-Louis Deherain, Counsellor to the Paris Appellate Court.

Discover the clocks and pendulums of Pierre Gavelle 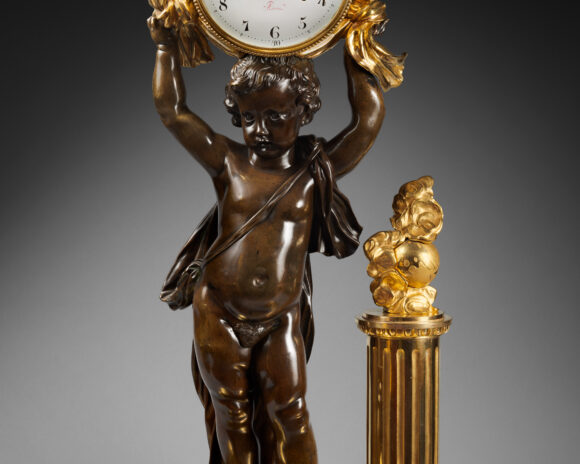 Gavelle
Exceptional Monumental Clock in Gilt and Patinated Bronze...
Back
We use cookies to ensure that we give you the best experience on our website. If you continue to use this site we will assume that you are happy with it.Ok