This is evidently the signature of one of the members of the Dugrandmesnil or Dumesnil family, a dynasty of Parisian clockmakers that seems to have shortened its name during the Revolution to avoid any confusion with the aristocracy. The name Mesnil appears on many dials alongside that of Ravrio; the two regularly worked together during the Empire period. Many of these clocks were owned by important contemporary collectors; several were briefly described in the probate inventories of General Joseph-Félix Lazowski, Marquis Germain Garnier, Emmanuel-Marie-Louis, Marquis de Noailles, the French ambassador in Vienna, Louis-Alexandre Berthier, Prince of Wagram, and Napoleonic Marshal Michel Ney, Prince de la Moskowa.

Discover the clocks and pendulums of Mesnil 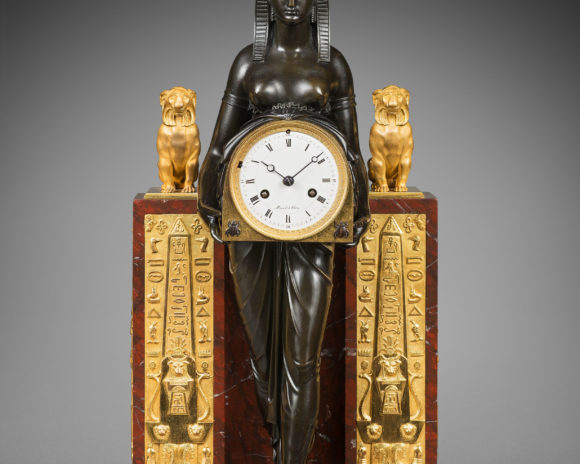 Mesnil - Ravrio
Rare Gilt and Patinated Bronze and Red Griotte Marble Mantel Clo...
Back
We use cookies to ensure that we give you the best experience on our website. If you continue to use this site we will assume that you are happy with it.Ok