Joseph-Charles-Paul Bertrand, known as Charles Bertrand (Nettancourt 1746-Paris 1789) is one of the most important Parisian clockmakers of the reign of Louis XVI. After his apprenticeship with Eustache-François Houblin, he became a master on February 20, 1772, and opened a workshop in the rue Montmartre. Within just a few years, he had become famous for the excellence of his movements and received the title of Horloger de l’Académie Royale des Sciences. He specialized in skeleton clocks and clocks with complications, working with the finest artisans of the time. These incuded Knab for the cases, Barbichon, Coteau and Borel for the dials, and Jean-Joseph de Saint-Germain and François Vion for the bronzes. His wealthy clientele included financiers and important aristocrats such as the Marquise de Lambertye and Harenc de Presle. For the latter he made a fine vase-shaped clock that was described in April 1795 when his collection was sold: “A rich vase, of a lovely shape, with double-scroll handles, a lid, with garlands of roses, surmounted by a pinecone. In the middle of the vase and on the band there is a circle framed by imitation jewels, with a watch dial enameled by Charles Bertrand, the vase on a pedestal with sloping sides; it stands on a fluted column whose base is adorned with laurel toruses. Height 14 pouces, diameter 8”.

Today, clocks by this horologist may be found in important collections around the world, including the Metropolitan Museum of Art in New York, the Musée National des Techniques in Paris and the Walters Art Gallery in Baltimore.

Discover the clocks and pendulums of Joseph-Charles-Paul Bertrand 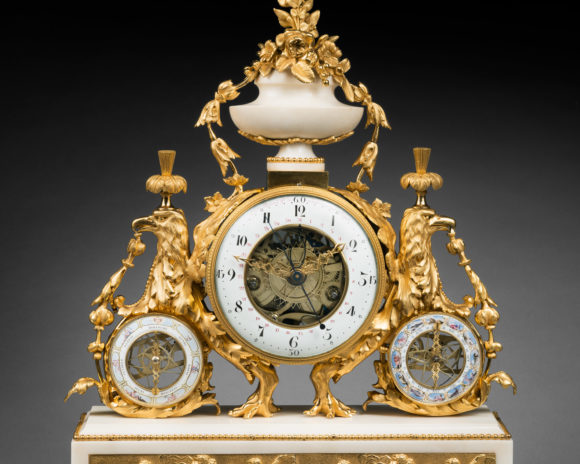 Bertrand - Rémond - Coteau
Exceptional Mantel Clock made of White Marble and Gilt Bronze wi...
Back
We use cookies to ensure that we give you the best experience on our website. If you continue to use this site we will assume that you are happy with it.Ok