Born in Bièvres in the Ardennes in 1768, Jean-Joseph Lepaute, known as “Collignon“, was a member of one of the most important Parisian clockmaking dynasties of the 18th century and the early 19th century.  The nephew of Pierre-Basile Lepaute, called “Sully-Lepaute“, he went into partnership with his uncle, founding the “Lepaute Oncle & Neveu” company, active from 1798 to 1811. During this period they won several awards, including a silver medal at the 1806 Exhibition of the Products of Industry. After 1811, Jean-Joseph established his own firm, “Lepaute neveu à Paris”, opened a workshop in the Place du Palais Royal and was given the honorary title of “Horloger du Roi de Rome” (“Roi de Rome” was the title given to Napoleon’s son). In 1813, he made a clock for Fontainebleau Palace, and delivered pieces to the Saint-Cloud and Compiègne castles. After the fall of Napoleon he continued to receive important public commissions. He is cited in the rue de Richelieu in 1820, then in the rue Saint-Honoré the following year. After his son’s premature death he sold his business to his cousin Augustin-Joseph-Henry Lepaute.

Discover the clocks and pendulums of Jean-Joseph Lepaute 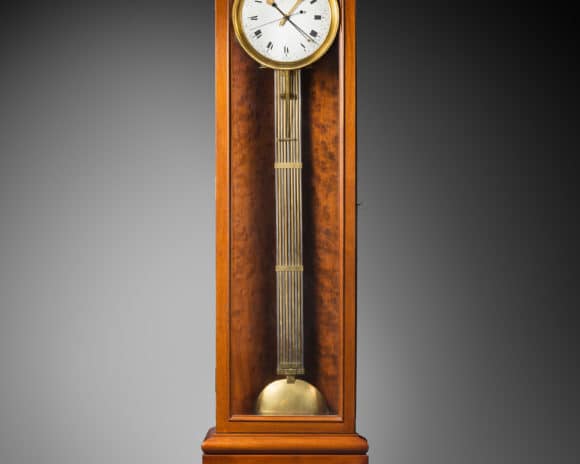 Lepaute - Jacob-Desmalter
Important Long Case Regulator or “pendule à secondes” indicating...
Back
We use cookies to ensure that we give you the best experience on our website. If you continue to use this site we will assume that you are happy with it.Ok