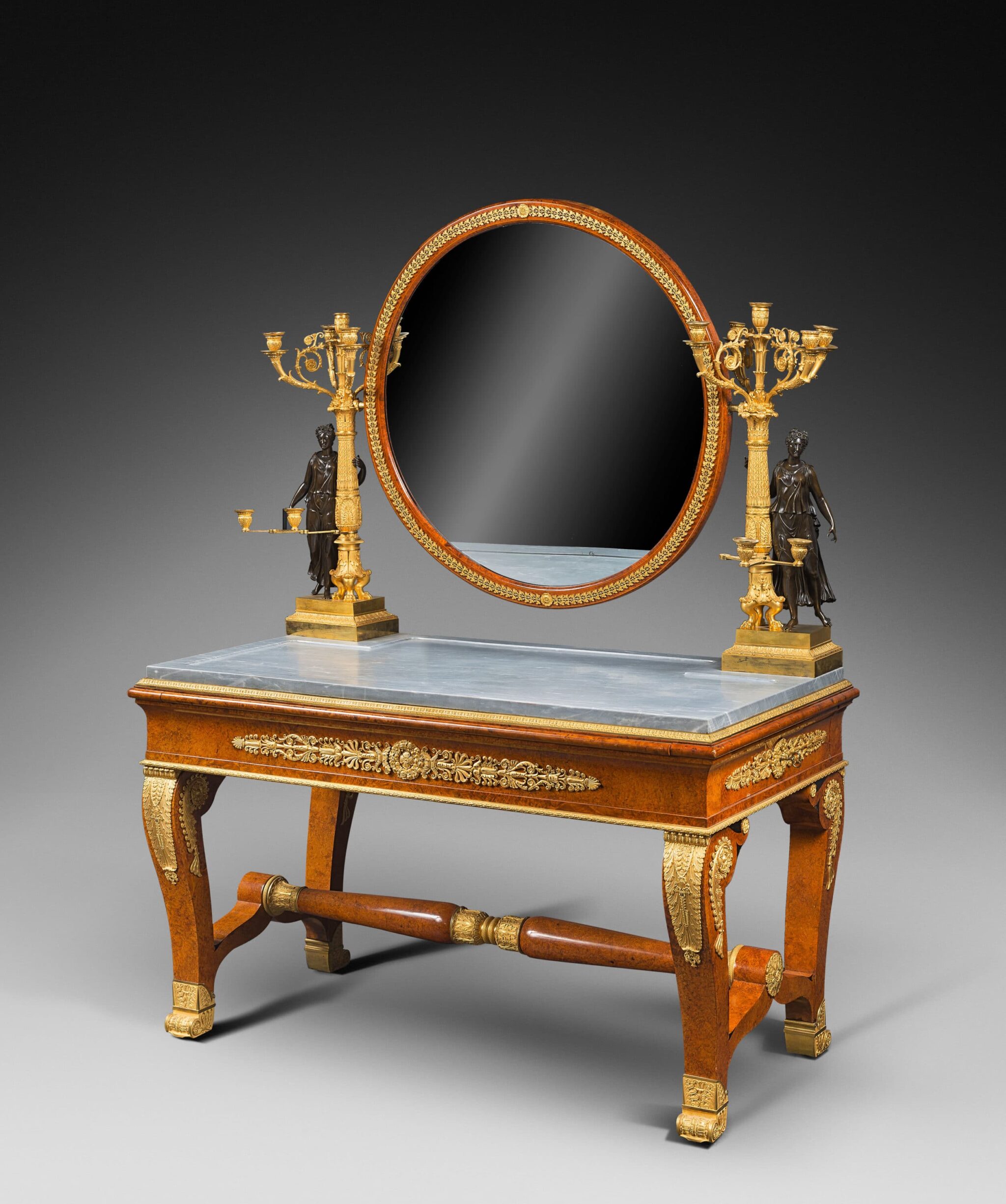 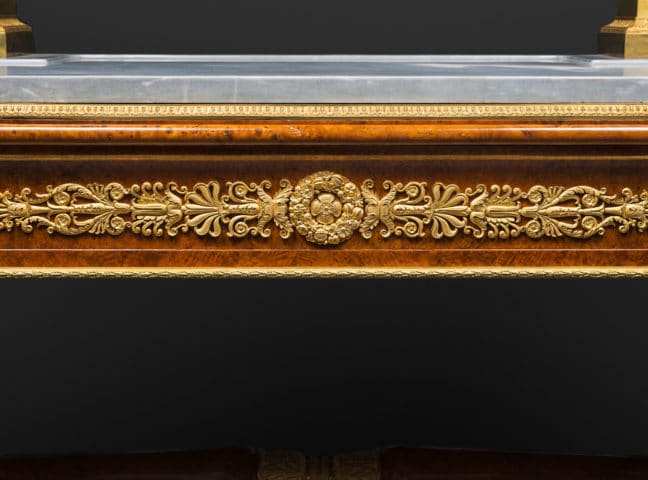 This rare dressing table, decorated on all sides, is a very unusual two-part piece of furniture, which is elaborately adorned with finely chased, patinated and gilt bronze. The upper portion features a round mirror that is framed by a leaf and flower frieze, and is attached to two baluster columns that are chased with stiff leaves, palmettes, acanthus leaves, and leaf-decorated, engine-turned bands. Resting on tripod feline-paw feet, they issue five light branches, four of which are curved and decorated with arabesque scrolling and rosettes; each also supports a folding, jointed arm with two candleholders. To the side of each stem stands a superb female figure depicting a young nymph coiffed with a flower wreath; the quadrangular bases are adorned with friezes of stylized foliage and ribbon-tied toruses. The blue turquin marble platform, with molded reserve, surmounts a table with wide entablature with two lateral drawers, and a writing surface that is released by pushing a button. The apron is embellished with a pierced foliate motif featuring a wreath flanked by scrolling, palmettes and flowers. The table rests on four robust console feet that are adorned with leaf motifs, terminate in scrolling hooves, and are linked by an H-shaped double-baluster stretcher with central leaf-decorated bands.

This rare example is one of the most elaborate dressing tables of the early decades of the 19th century. Its characteristic design with two distinct parts, one featuring a mirror, distinguishes it from 18th century coiffeuses, in which the mirrors were fixed to the other side of folding elements. Here, the mirror is an integral part of the table and completely fills the function it was intended for. Only a few comparable examples are known today. Among them, one model, which Empress Josephine ordered from Antoine-Thibaut Baudouin as early as 1809, and is an early example of burr ash veneering, is on display in the Grand Trianon (illustrated in the exhibition catalogue L’aigle et le papillon, Symboles des pouvoirs sous Napoléon 1800-1815, Musée des Arts décoratifs, Paris, 2007, p. 116-117). A second piece was purchased directly by the Duchess de Berry at the stand of Félix Rémond during the 1823 Exposition des Produits de l’Industrie and was later placed in the Duchess’s new apartments in the Tuileries Palace; it is today in the Paris Musée des Arts décoratifs (see the exhibition catalogue Entre cour et jardin, Marie-Caroline, duchesse de Berry, Musée de l’Ile-de-France, Sceaux, 2007, p. 131). A third example was delivered by Jacob-Desmalter in 1807 for the Compiègne Palace (illustrated in J-P. Samoyault, Mobilier français Consulat et Empire, Paris, 2009, p. 227). Around 1809 Jacob-Desmalter delivered a fourth table, with lyre feet, for the apartments of the Empress (see J-M. Moulin, Guide du musée national du château de Compiègne, Paris, 1992, p. 81). A fifth example, delivered in 1809 by Thomire-Duterme et Cie for the Empress’s bedchamber in Fontainebleau Palace, is still there; its woodwork has been been described as relating to the Jacob workshop in J-P. Samoyault, Fontainebleau, Musée national du château, Meubles entrés sous le Premier Empire, RMN, Paris, 2004, p. 292-293. Finally, we should mention a comparable piece, the crystal coiffeuse that was created around 1819 by the “A l’Escalier de cristal” firm and is today in the Louvre Museum in Paris (illustrated in D. Alcouffe, A. Dion-Tenenbaum et A. Lefébure, Le mobilier du Louvre, Tome I, Editions Faton, Dijon, 1993, p. 321, catalogue n° 110). 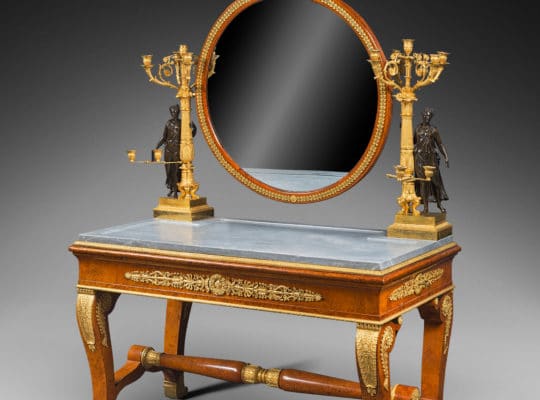 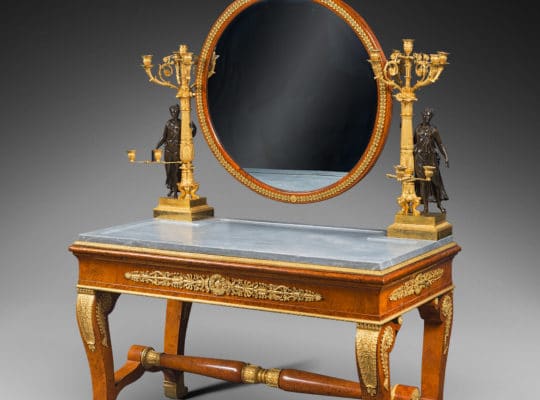 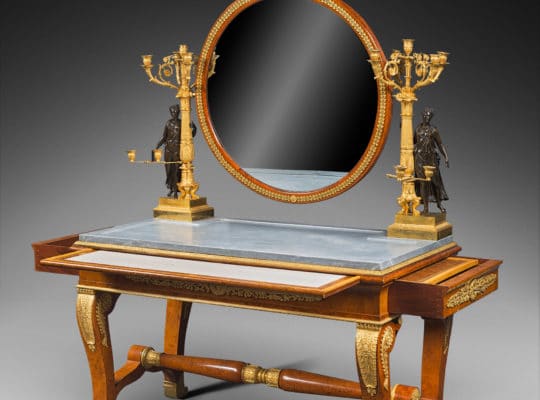 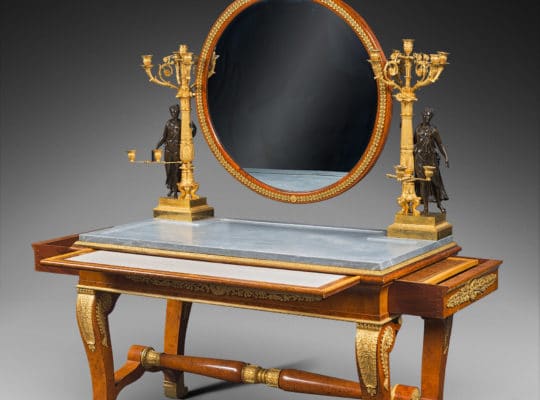 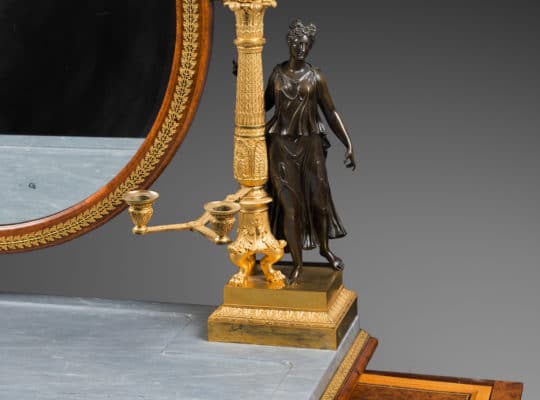 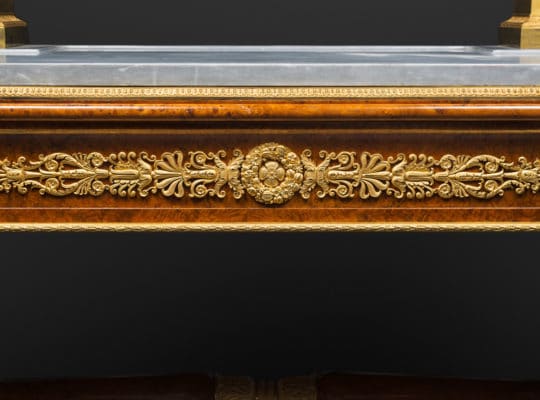 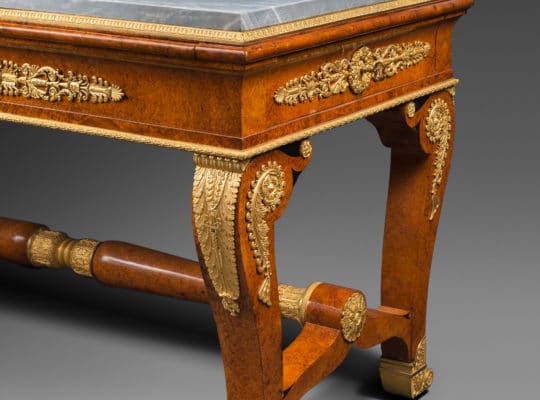 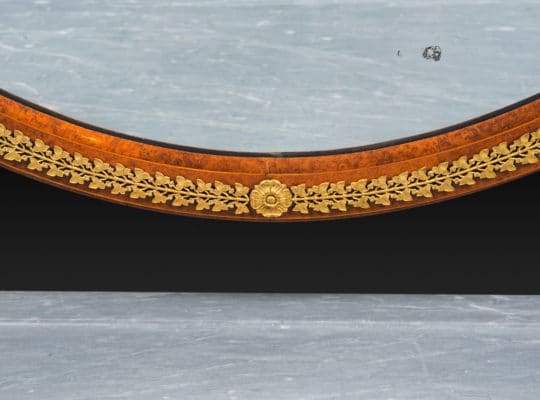 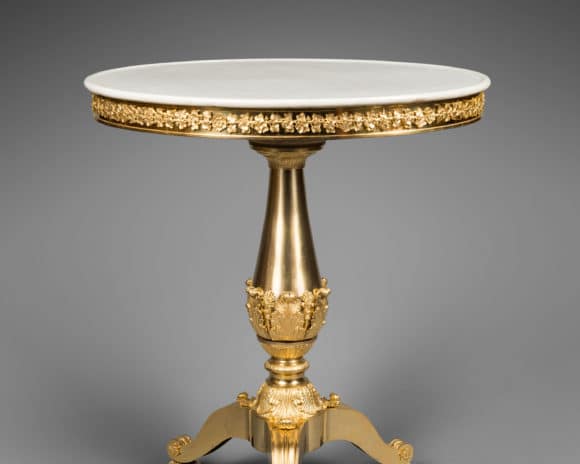 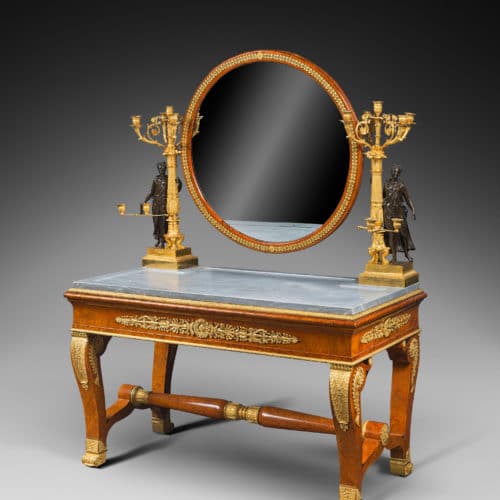