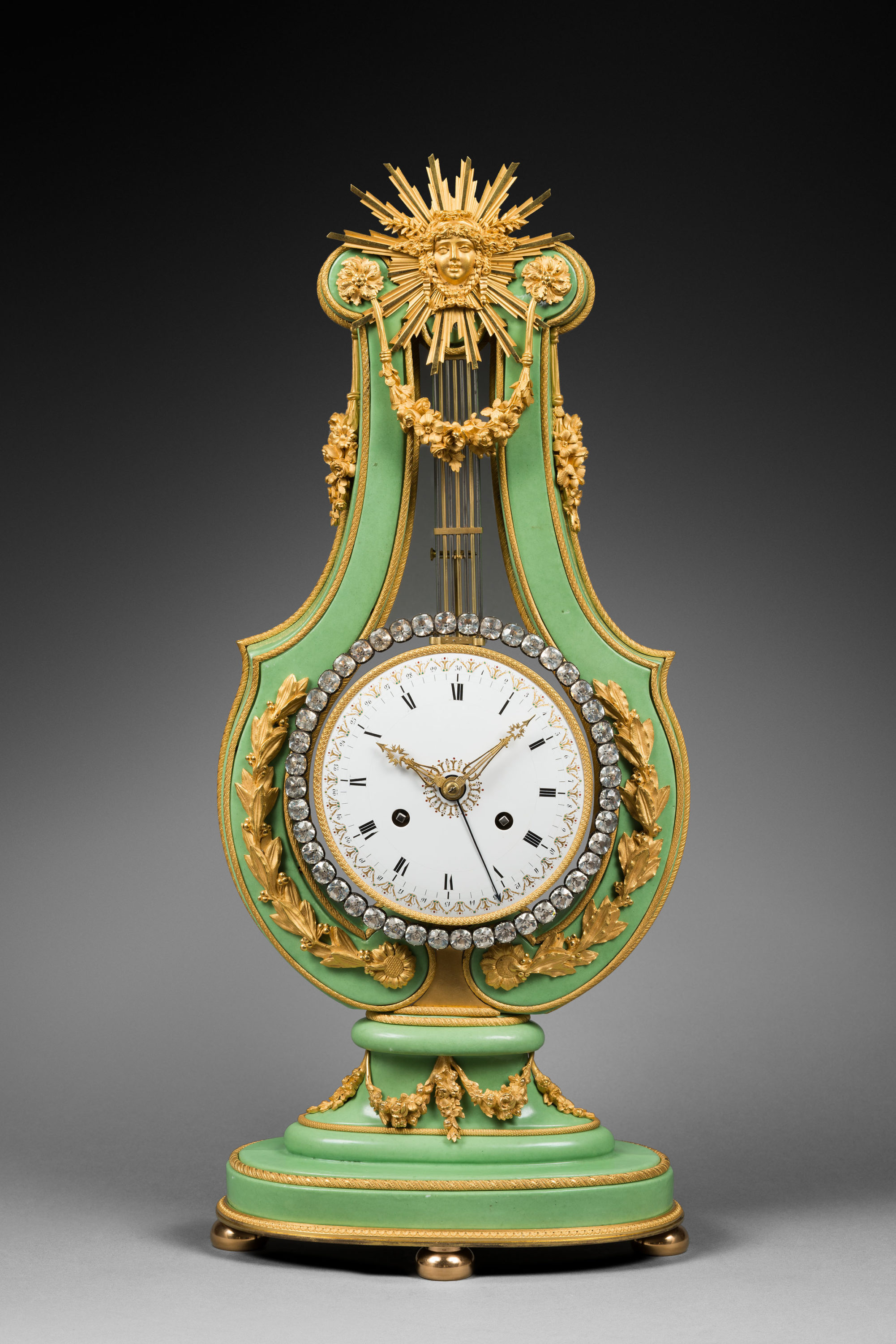 The dial signed and dated “Dubuisson 1818”

The round white enamel dial, adorned with a frieze of gold flowers and cabochons in the manner of Coteau, indicates the Roman numeral hours, the minute graduations and the date, by means of three hands, two of which are made of pierced and gilt bronze. It is dated “1818” and is signed “Dubuisson”, the mark of the workshop of Etienne Gobin, known as Dubuisson (1731-1815), whose widow continued to run the workshop after the enameler’s death. The movement is set in a magnificent finely chased matte and burnished gilt bronze lyre-form case with celadon green porcelain mounts made by the Locré factory. The bezel, decorated with a frieze of leaves and seeds, is framed by a ring of brilliant-cut rhinestones. The sides of the lyre are embellished with bands chased with ribbons and beads and adorned with laurel branches emerging from sun motifs. The upper portion, to which the bimetallic pendulum is attached, is decorated with spiral rosettes, flower and leaf garlands, and a sun mask symbolizing Apollo, the sun god. The oval base is adorned with spiral bands and an egg-and-dart frieze, and is embellished with suspended flower swags. The clock is raised upon four flattened ball feet.

The “lyre” clock model was produced in porcelain by the Royal Sèvres porcelain factory as of the mid-1780s. It was generally made in one of four colors: turquoise, green, pink, and a blue known as bleu nouveau. These extraordinary clocks were made for the most important collectors of the time; in his Salon des jeux in Versailles King Louis XVI had a blue porcelain lyre clock whose dial was signed by the clockmaker Courieult (almost certainly the example illustrated in P. Verlet, Les bronzes dorés français du XVIIIe siècle, Paris, 1999, p. 41). However, it was the clockmaker Kinable, the largest purchaser of this type of clock cases from the factory, who developed the model toward the end of Louis XVI’s reign. He signed the dial of a rare turquoise porcelain clock that is illustrated in P. Kjellberg, Encyclopédie de la pendule française du Moyen Age au XXe siècle, Paris, 1997, p. 230, fig. A. To the best of our knowledge, only one other green porcelain lyre clock is known; produced by the Sèvres factory, it is today in the Musée François Duesberg in Mons (illustrated in Musée François Duesberg, Arts décoratifs 1775-1825, Brussels, 2004, p. 25).

The present clock presents unique features. It was made during the first quarter of the 19th century, not by the Sèvres porcelain factory, but by the Locré factory, which at the time was called  “Pouyat et Russinger”, and was one of the most important Parisian manufactories of the early 19th century. Located in the rue Fontaine-au-Roi, the factory had been founded in the early 1770s by Jean-Baptiste Locré. Several years later, Locré went into partnership with Laurent Russinger, who ran the manufactory until the late 18th century. Around 1800, the Limoges merchant François Pouyat became Russinger’s partner and became responsible for running the company. Pouyat greatly increased the factory’s activities until 1810, then sold it to his three sons, who continued production, with great success, until the Restoration. The Pouyat et Russinger factory specialized in common but high quality articles, mainly tableware and decorative pieces. At the same time, it produced works on commission – these were very high quality luxury items including several vases with grisaille decoration, such as a pair of oval vases that were formerly in the collection of Michel Bloit and are today in the Musée Adrien Dubouché in Limoges (see R. de Plinval de Guillebon, Faïence et porcelaine de Paris XVIIIe-XIXe siècles, Editions Faton, Dijon, 1995, p. 403, fig. 395) and the present lyre clock, which appears to be the only example made by the Locré Manufacture, along the lines of the model produced by the Sèvres porcelain factory. 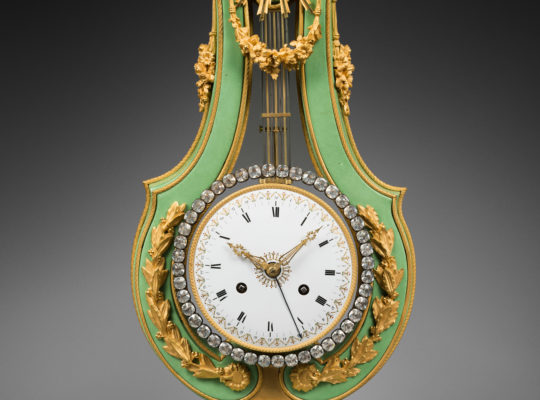 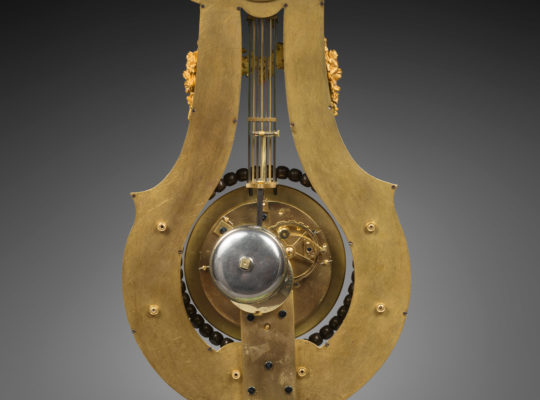 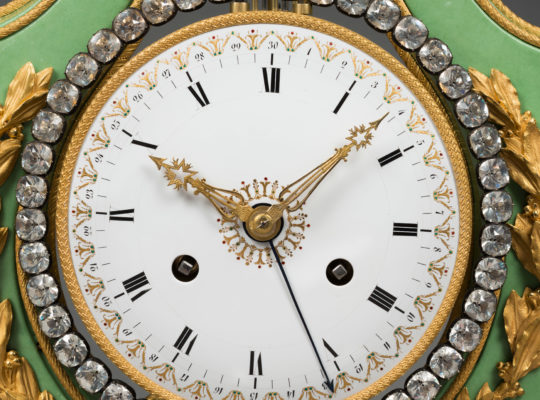 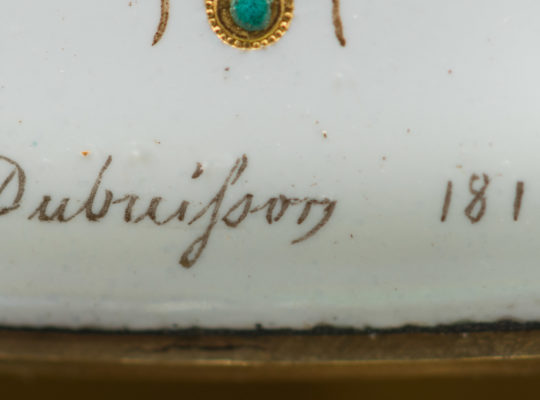 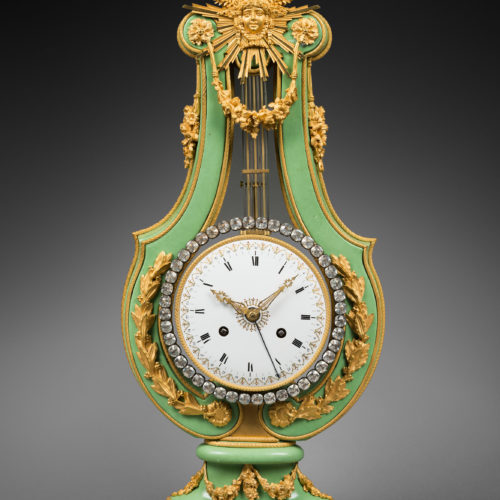