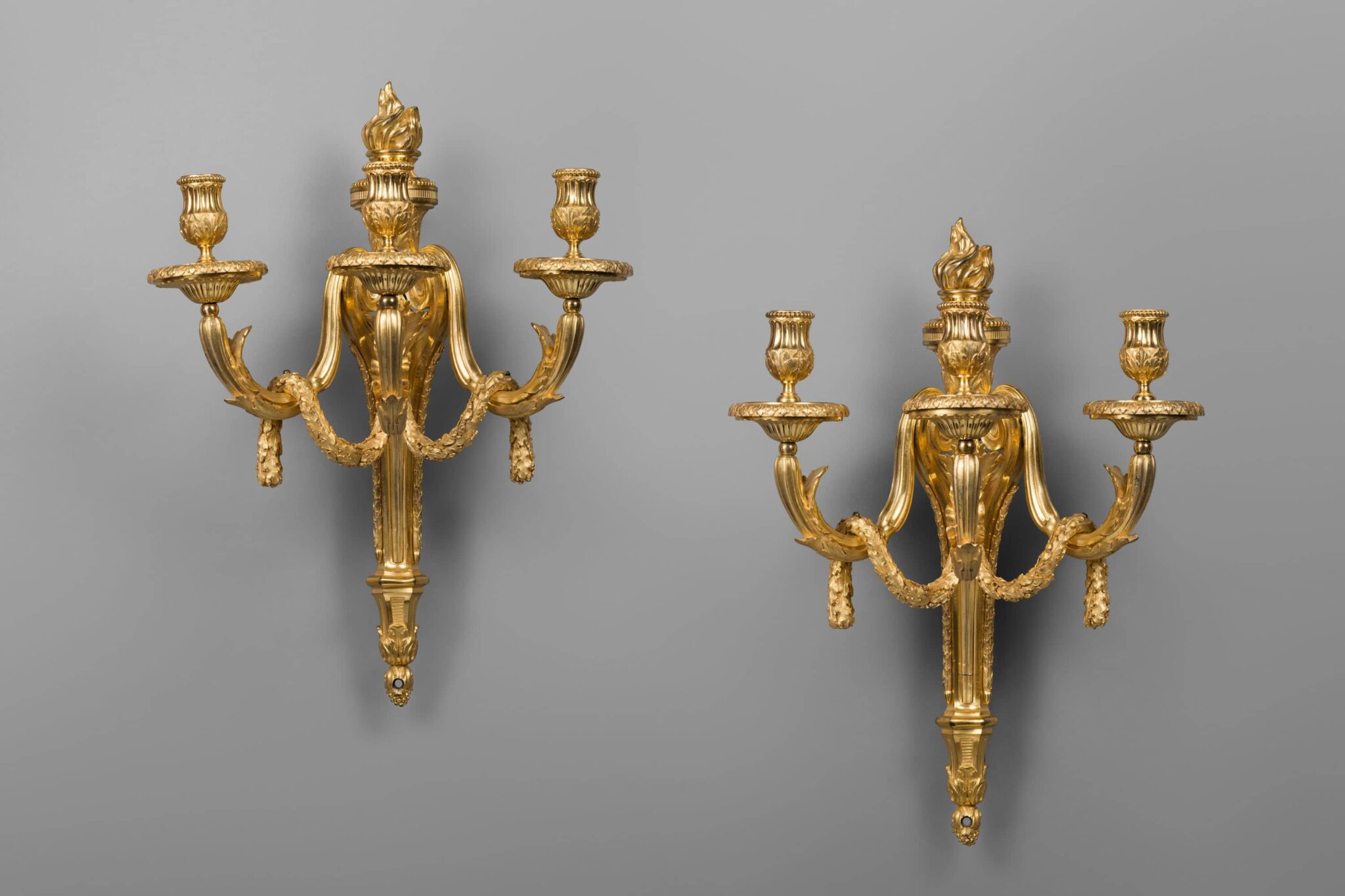 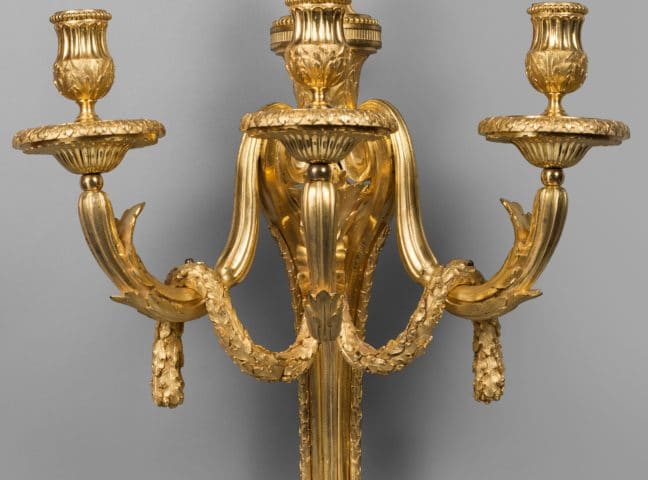 In the Manner of the Designs of Jean-Charles Delafosse

Made entirely of finely chased matte and burnished gilt bronze, the wall lights feature a tapering stem that is adorned by laurel leaf garlands. To it are attached three curving light branches. The branches, of which the two lateral ones issue from volutes, are decorated with acanthus leaves and support finely chased drip pans and nozzles, which are embellished with friezes of foliage, acanthus leaves, and beads. Two oak leaf garlands emerge from the upper portion of the stem and are draped over the lateral light branches. The wall lights are surmounted by a flaming urn, which is decorated with acanthus leaves, beads, and a mille-raies frieze. The stem terminates in a seed finial that emerges from a leaf bouquet.

By the mid-18th century, the ornamental schemes that had prevailed in the French decorative arts for several decades were being challenged. That movement, which was led by scholars and collectors, was influenced by the extraordinary archaeological discoveries made in the ancient cities of Pompeii and Herculaneum, near Naples. Over the years, a handful of collectors, artists and artisans, went on to impose a new style that was directly inspired by Greek and Roman antiquity. That atmosphere of aesthetic effervescence formed the context within which the present wall lights were created. Their ornamental vocabulary, comprising scrolling, oak leaf garlands, and flaming antique vases, is characteristic of the finest Parisian creations of the late 1760s and the early portion of the following decade. It was inspired by the drawings of contemporary designers, including Jean-Charles Delafosse, who did an engraving that relates to the design of the present wall lights (illustrated in H. Ottomeyer and P. Pröschel, Vergoldete Bronzen, Die Bronzearbeiten des Spätbarock und Klassizismus, Band I, Munich, 1986, p. 187, fig. 3.9.5). To date, this model has not been attributed to any particular bronze caster. However, their design and the quality of their casting and chasing are reminiscent of certain models that were created at the period by some of the finest Parisian bronze casters, including Jean-Joseph de Saint-Germain, the greatest bronzier of the neoclassical revival (see J-D. Augarde, “Jean-Joseph de Saint-Germain bronzier (1719-1791), inédits sur sa vie et son œuvre”, in L’Estampille/L’Objet d’art, n° 308, December 1996). 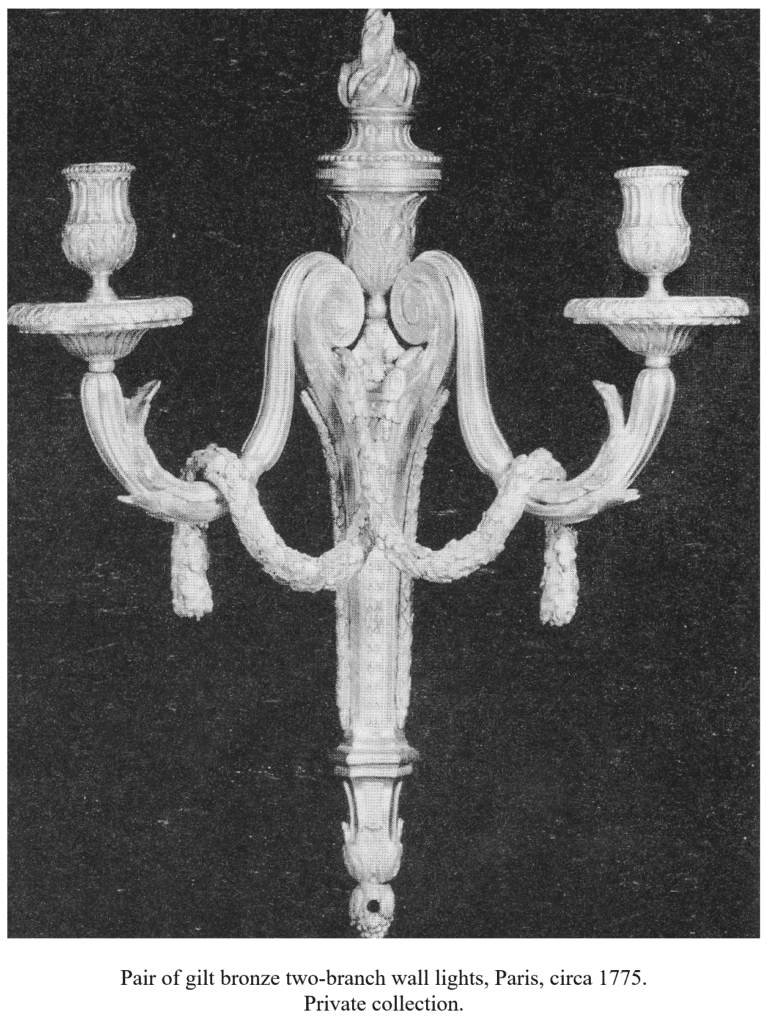 Today, among the similar known wall lights, some of which feature variations in their treatment and general design and in the number of branches, one pair with three branches, which is surmounted by a flaming urn and tripod, was sold at Sotheby’s, London, on November 26, 1976, lot 85. A second pair, with two branches, which was surmounted by the same decorative motif, was offered on the Paris art market in 1988 (sold Ader-Picard-Tajan, Hôtel George V, June 23, 1988, lot 111; Collection of Madame Riahi and several other collectors). One further pair, which is identical to the present pair except that it features only two light branches, is illustrated in H. Ottomeyer and P. Pröschel, op.cit., p. 187, fig. 3.9.6.

Write us
Call us
Print
Share
In the same category
Delafosse 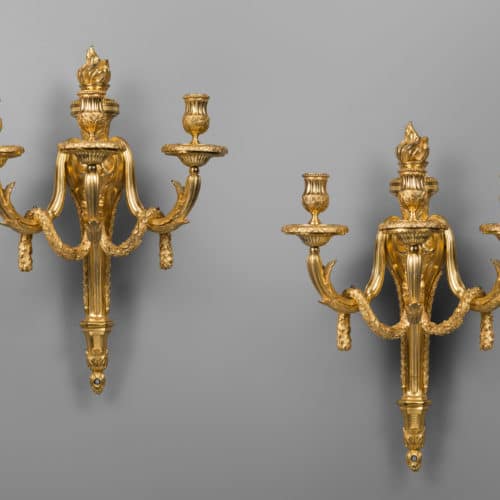