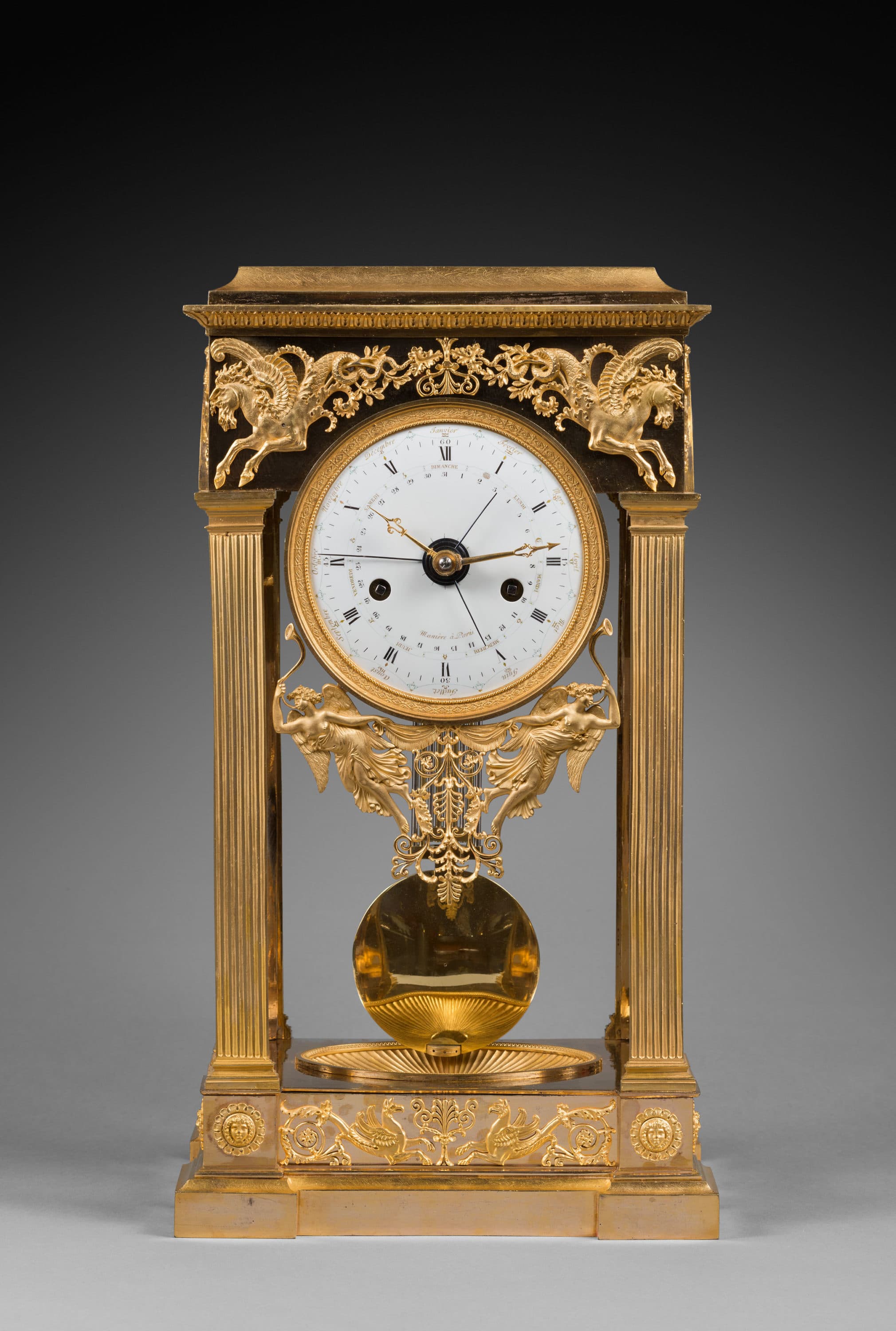 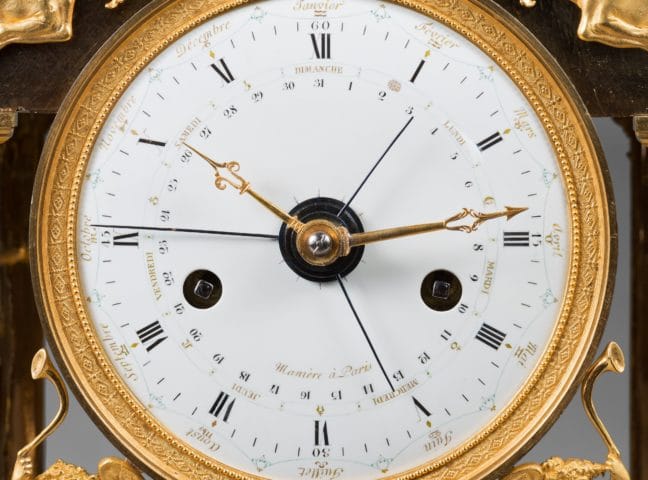 The round white enamel dial, signed “Manière à Paris”, indicates the Roman numeral hours, the Arabic numeral fifteen-minute intervals, the date, the days of the week along with their respective astrological signs, and the months, by means of five hands, two of which are in pierced gilt bronze and three of which are in blued steel. The hour and half hour striking movement has a compensated bimetallic pendulum has a heavy round bob that improves the precision of the movement. The neoclassical architectural case has glazed sides. The slightly protruding cornice is adorned with a stylized waterleaf frieze; it supports a molded entablature and rests on four fluted pillars with molded capitals and bases. It is adorned with cut-out panels: on the façade, two winged horses whose scaly tails are wrapped around branches with a central motif featuring a flower that is flanked by scrolls, and on the sides, framed arches with putti musicians. The dial surmounts a delicate drapery which issues an arabesque motif with palmettes and volutes and is framed by figures of Fame playing the trumpet. The rectangular terrace is centered by an oval motif with radiating fluting. The quadrangular base with protruding corners is adorned with applied lozenges, facing griffons with acanthus leaf tails, round mascarons with petal borders and a molded plinth.

The unusual composition of the present rare desk regulator was inspired by certain clocks that were made in Paris during the last two decades of the 18th century. However its architectural design, in the form of an Arc de Triomphe, bears testimony to the Emperor’s influence on the decorative arts of the time and his desire to commemorate the victories of the Grande Armée. Among the small number of comparable clocks known today, one example, made by “Lepaute à Paris 1807”, is in the collection of the Mobilier National in Paris (shown in M-F. Dupuy-Baylet, Pendule du Mobilier national 1800-1870, Editions Faton, Dijon, 2006, p. 91, catalogue n° 35). A second clock is on display in the Château of  Fontainebleau (see J-P. Samoyault, Musée national du Château de Fontainebleau, Catalogue des collections de mobilier, 1. Pendules et bronzes d’ameublement entrés sous le Premier Empire, RMN, Paris, 1989, p. 69, catalogue n° 32). There are two further clocks that are identical to the present one: the first, whose dial is signed “Thiéry à Paris”, is illustrated in P. Kjellberg, Encyclopédie de la pendule française du Moyen Age au XXe siècle, Paris, 1997, p. 373. The second, whose dial is signed “Laguesse à Paris” and which is surmounted by an allegorical figure, was formerly in the collection of “Au Balancier de Cristal” (illustrated in Tardy, La pendule française, 2ème Partie : Du Louis XVI à nos jours, Paris, 1974, p. 397).


Charles-Guillaume Hautemanière, known as Manière (mort à Paris en 1834) is one of the most important Parisian clockmakers of the late 18th and early 19th centuries, he became a Master on May 1, 1778, and opened a workshop in the rue du Four-Saint-Honoré. He immediately became famous among connoisseurs of fine horology. Throughout his career, Manière sourced his clock cases from the best Parisian bronze casters and chasers, including Pierre-Philippe Thomire, François Rémond, Edmé Roy and Claude Galle. Marchands-merciers such as Dominique Daguerre and Martin-Eloi Lignereux called upon him to make clocks for the most influential collectors of the time, including the Prince de Salm, the banker Perregaux and the financier Micault de Courbeton, all three of whom were collectors of fine and rare horological pieces. Today, his clocks are found in the most important international private and public collections, including the Hermitage Museum in Saint Petersburg, the Musée national du château de Fontainebleau, the Quirinal Palace in Rome, the Nissim de Camondo Museum in Paris and the Musée national du château de Versailles et des Trianons. 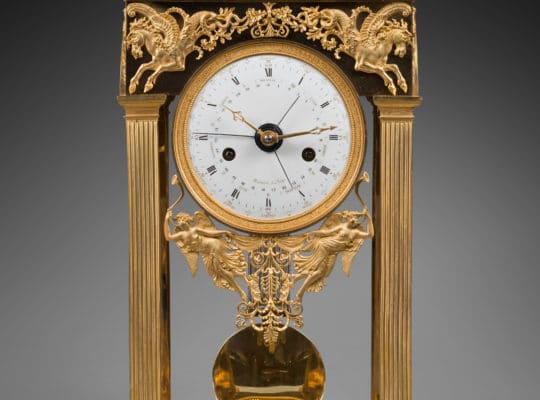 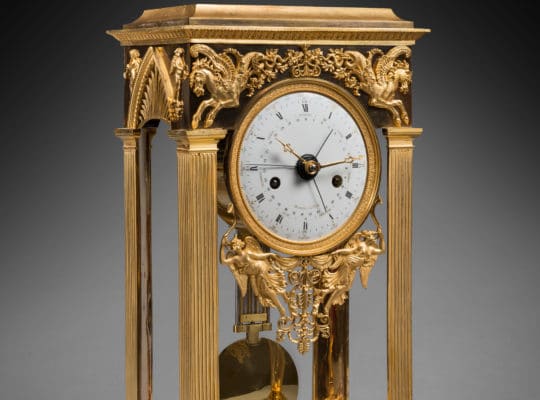 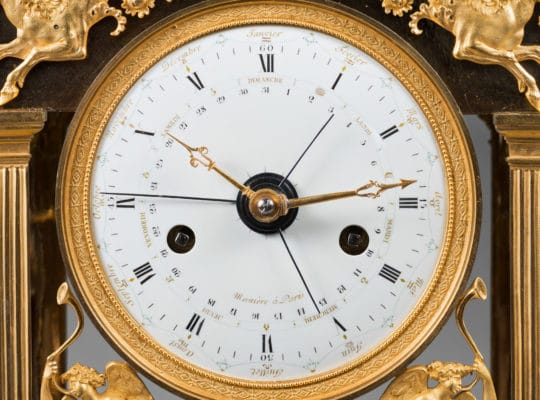 Write us
Call us
Print
Share
In the same category
Manière 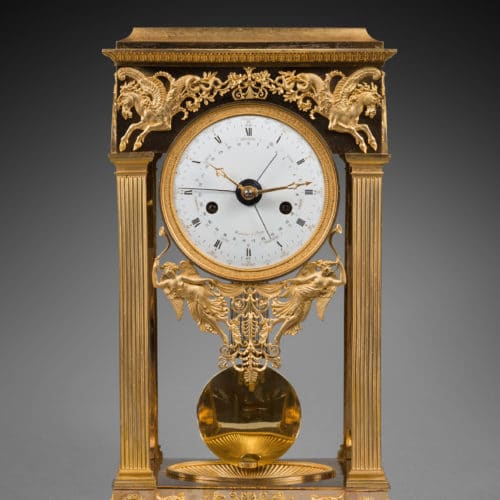