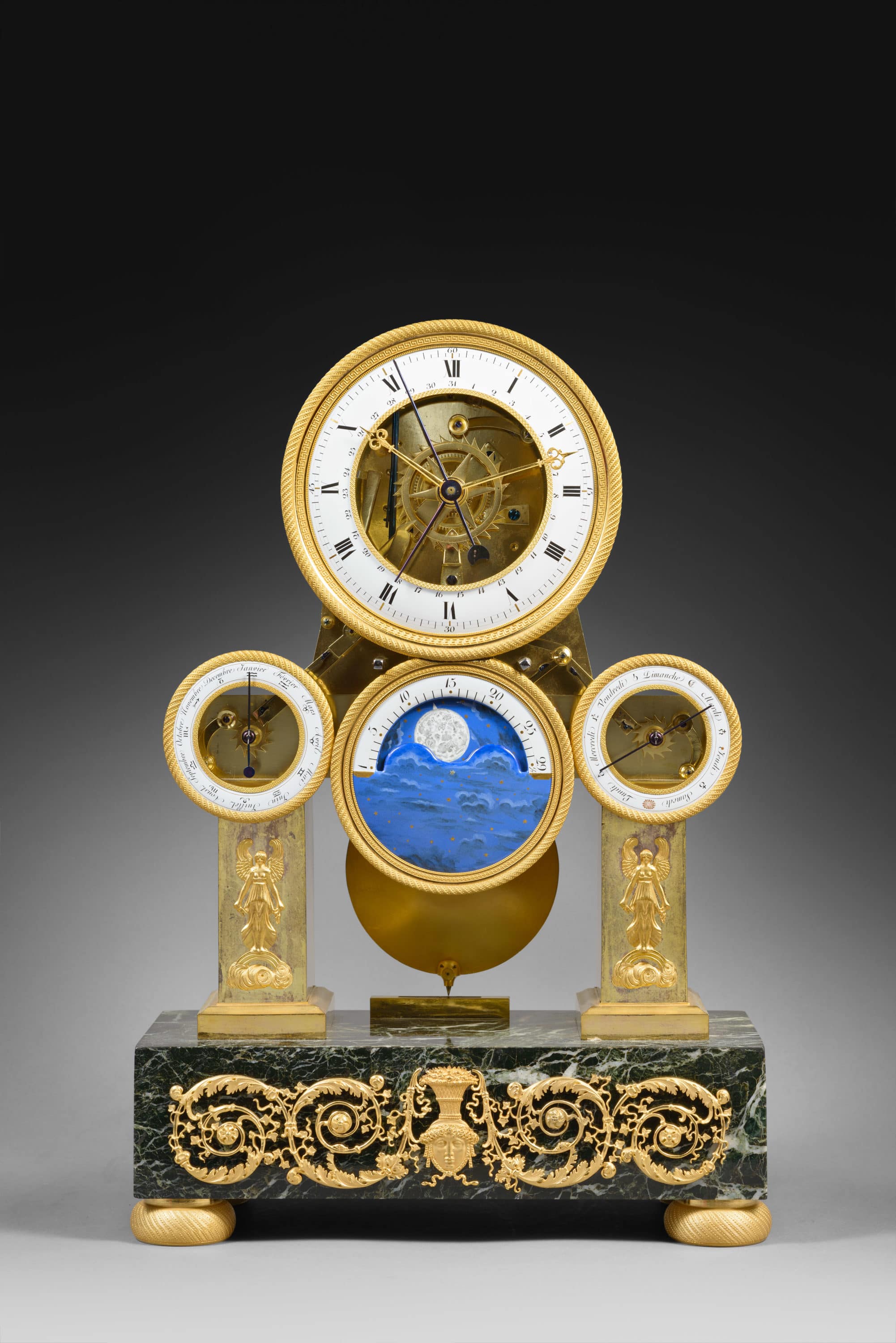 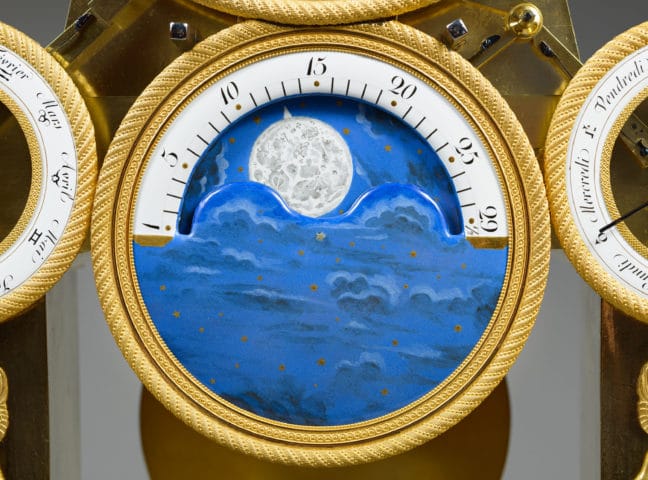 The main annular dial indicates the Roman numeral hours, and the Arabic numeral fifteen-minute intervals and date; it indicates the seconds by means of four hands, two of which are made of pierced and gilt bronze, and two made of polished or blued steel. Below it are aligned three subsidiary dials, two of which are annular dials. The dial on the left indicates the months, with their corresponding Zodiac signs; the dial on the right indicates the days of the week, with their associated planetary symbols; between them the third dial, with a blue enameled sky, stars, and a grisaille moon, shows the phases and age of the moon. The bezels are decorated with interlace, Greek key, and bead friezes. On the reverse, the movement, with pin-pallet escapement, strikes the hours and half hours. Its bimetallic compensation balance features a bob that is fitted with a pointer indicating the thermal expansion of metals. The architectural case, in the form of an antique portal, features two columns with protruding capitals and bases. It is adorned with applied figures of Fame standing on stylized clouds. The structure is supported on a quadrangular vert de mer marble base, bearing applied relief motifs of acanthus scrolls, grapevines and rosettes; they are centered by a classical mask that is surmounted by a basket of flowers. The base stands on four flattened knurled ball feet.

The first skeleton clocks appeared in the final decade of the 18th century and the early years of the following century. These clocks feature a sober design, with a main annular dial that revealed both the beauty of the movements and gear trains and the complexity of the mechanisms, which were made by Europe’s finest clockmakers, and particularly Parisian ones. This new type of clock developed, on the one hand, out of connoisseurs’ admiration for the exceptional technical progress that had taken place since the mid 18th century, and on the other hand, out of their growing lack of interest for clocks depicting allegorical and mythological figures from classical Greek and Roman mythology. The present clock was made within this particular context. Its unusual design sets it apart from most of the other known comparable models, due to the quality and the precision of its mechanism and the unusual layout of the three subsidiary dials, which are aligned horizontally beneath the principal dial.

Although neither the dial nor the movement are signed, the present clock relates to certain creations of the best Parisian clockmakers of the period, and particularly to a clock whose dial bears the signature of enameler Joseph Coteau (1740-1801), which is illustrated in P. Heuer and K. Maurice, European Pendulum Clocks, Decorative Instruments of Measuring Time, Munich, 1988, p. 71, fig. 125; and particularly a second clock, formerly in the Albert Odmark collection in Seattle, which may be unequivocally attributed to the Parisian horloger-mécanicien Verneuil, the clockmaker to whom the present clock or desk regulator may also be attributed (illustrated in F.B. Royer-Collard, Skeleton Clocks, London, 1977, p. 76, figs. 5-9). 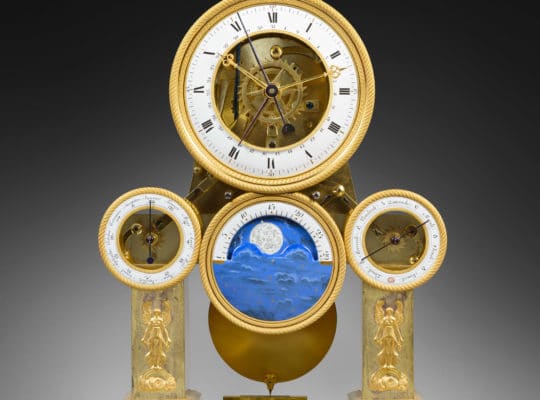 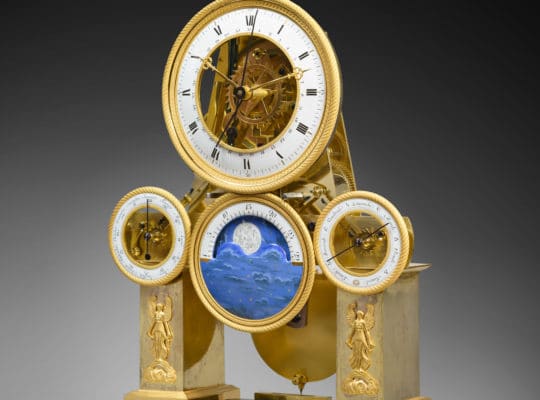 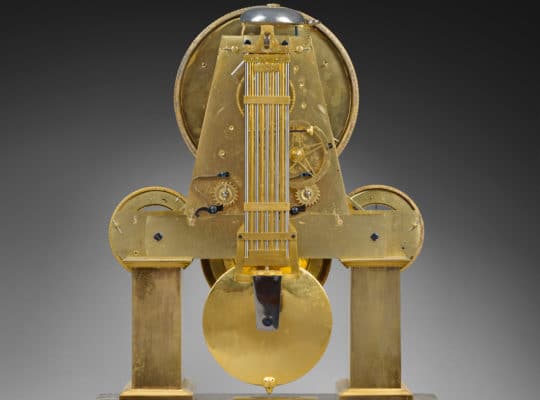 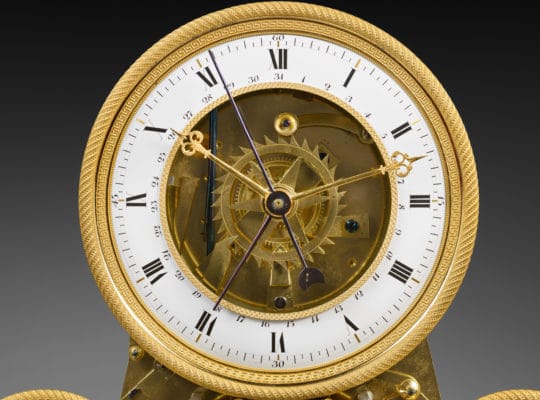 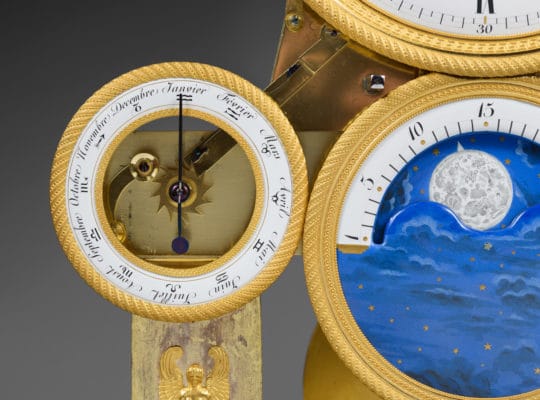 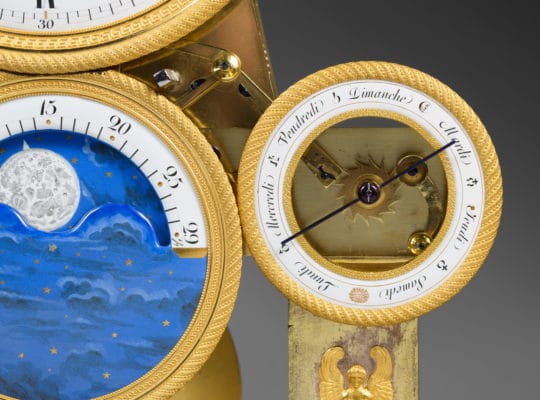 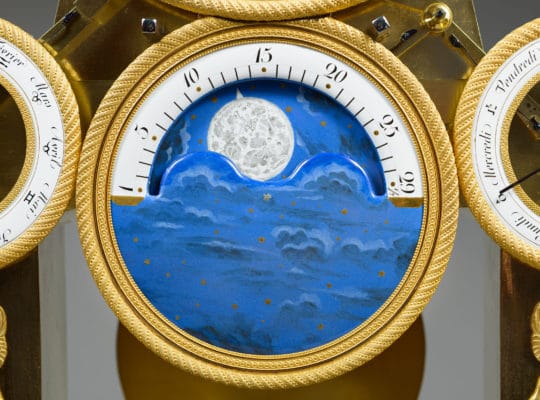 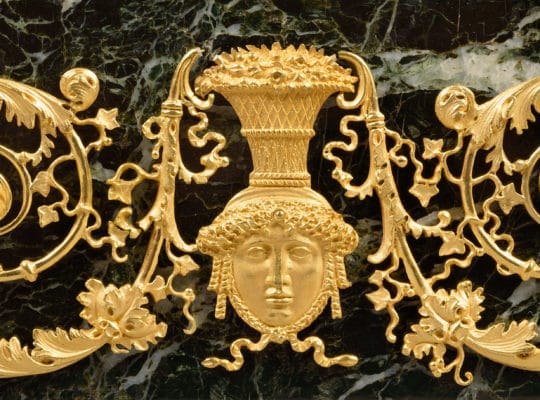 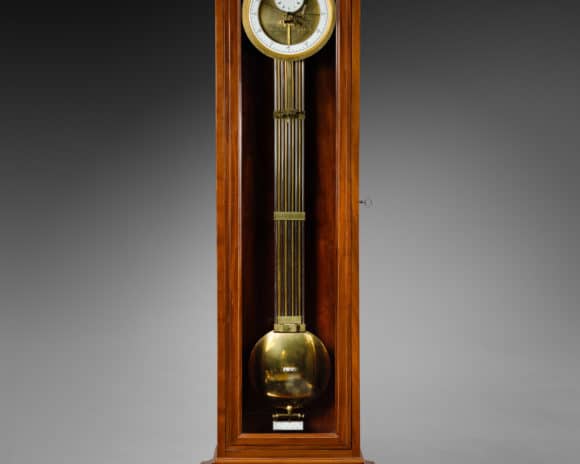 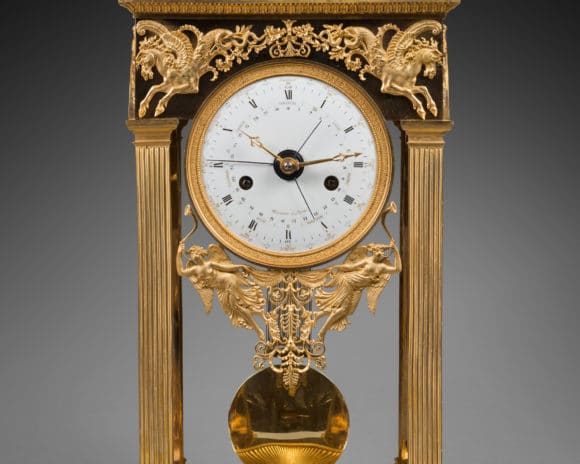 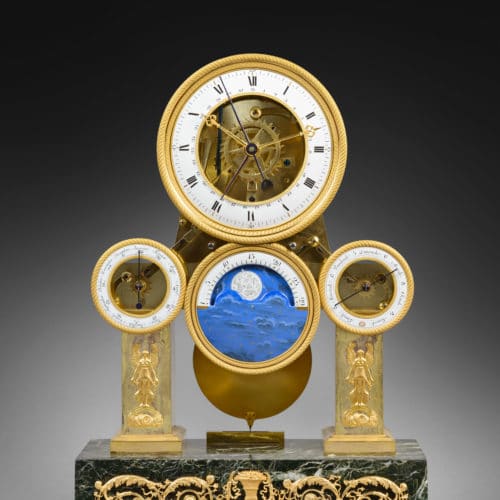