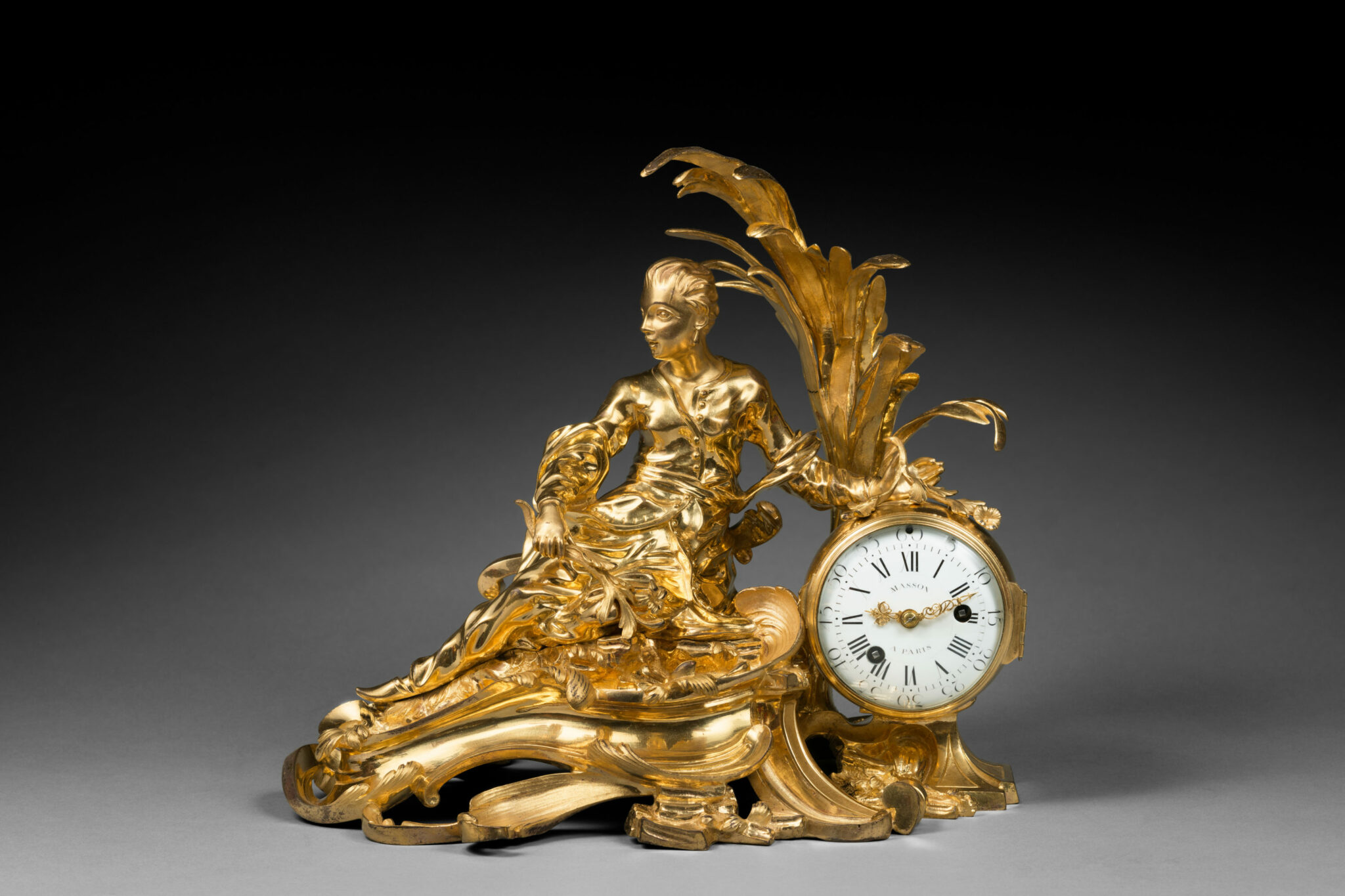 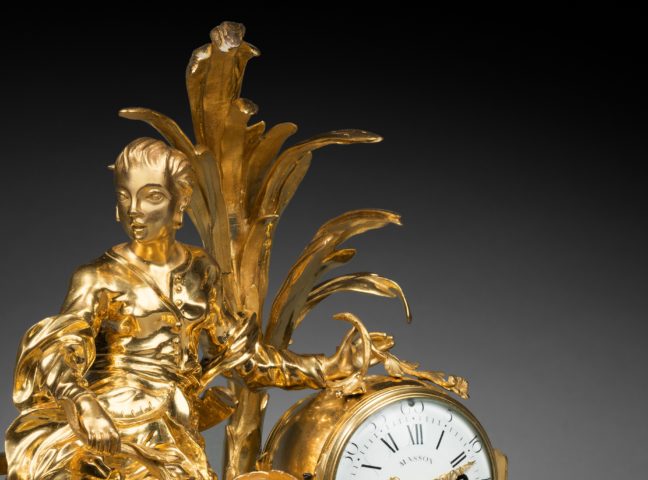 The round white enamel dial, signed “Masson à Paris”, indicates the Roman numeral hours and the Arabic numeral five-minute intervals by means of two pierced gilt bronze hands. The rocaille case made of finely chased gilt bronze with matte and burnished finishing. It is housed in a drum case that rests on a stylized rocky terrace that serves as its base, with matted reserves, with a palm tree behind. To the right there is a magnificent female Chinoiserie figure dressed in an Oriental-style tunic; she wears earrings and is holding a slender branch in each hand. The figure is reclining on a wide, shaped, naturalistic terrace adorned with C scrolls, scrolling, and stylized leaves and rocks.

The present clock, an example of the extraordinary popularity of Oriental and Chinoiserie motifs among connoisseurs in Paris and throughout Europe, is one of the most elaborate Parisian Chinoiserie creations of the reign of Louis XV. This model, whose composition is particularly elegant and balanced, was a great success toward the mid-18th century. It presents several similarities with some works by the bronze caster Jean-Joseph de Saint-Germain, to whom we attribute it. Today, among the small number of known identical clocks that sometimes feature a “Chinese” figure with a “smoky black patina”, one example, with a dial signed “Galland”, was formerly in the renowned Akram Ojjeh collection (sold Sotheby’s, Monaco, June 25, 1979). A second example, whose dial is signed “Musson”, was in the collection of Marquise Margaret Rockefeller de Larrain (sold Sotheby’s, New York, November 15, 1980, lot 77). A third clock, with a dial by Furet, appeared on the art market when the Elisabeth Firestone collection was sold (lot 873). One further such clock is illustrated in P. Kjellberg, Encyclopédie de la pendule française du Moyen Age à nos jours, Les Editions de l’Amateur, Paris, 1997, p. 117.

The date at which the present clock was created suggests that it was made by the clockmaker Denis Masson, one of the most important Parisian horologists of the 18th century.


Becoming a master on March 1, 1746, Denis Masson was one of the most important Parisian clockmakers of the 18th century. He began as an ouvrier libre, then became a master in 1746, opening workshops successively in the Abbaye Saint-Germain-des-Prés, on the pont Notre-Dame in 1747 and in the rue Sainte-Avoye in 1778. He quickly gained fame among important Parisian connoisseurs of luxury horology, particularly for his clocks adorned with Saxon porcelain figures. Like most of the finest clockmakers of his day, Denis Masson worked with many of the best artisans of the time. He collaborated with the bronze caster Jean-Baptiste Vallée and the cabinetmakers Lieutaud and Foullet. Among his clients were the Infanta of Parma, the duchess de Mazarin and the duchess de Villeroy, as well as the  Marquis de Persan and the Prince and Princess de Condé. 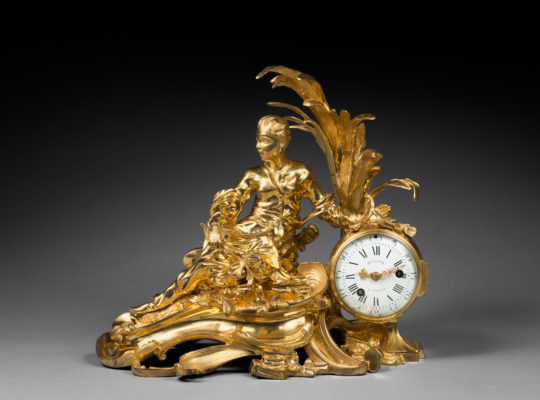 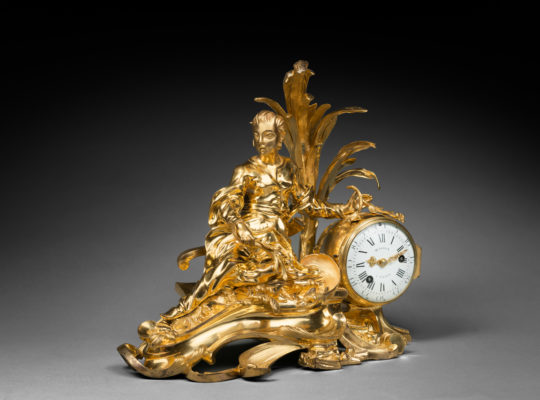 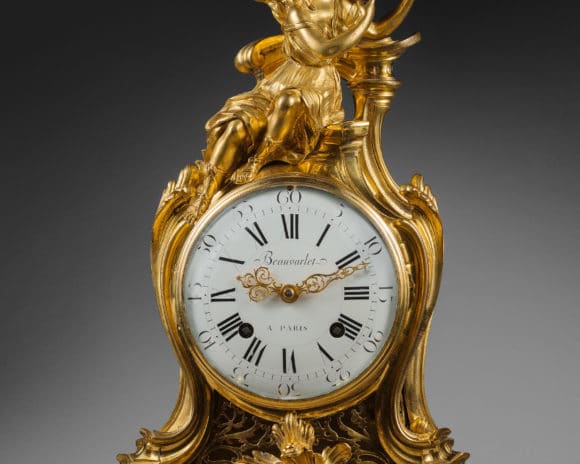 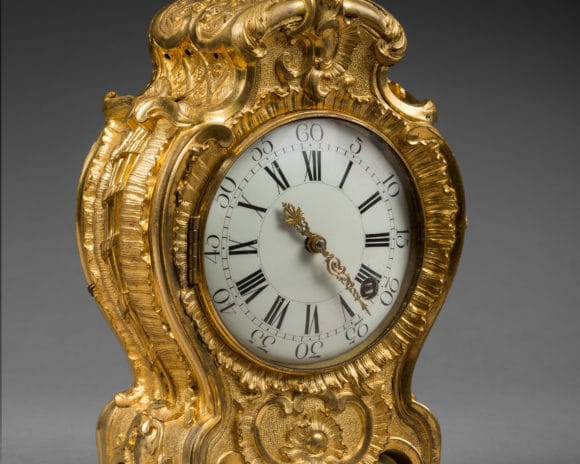 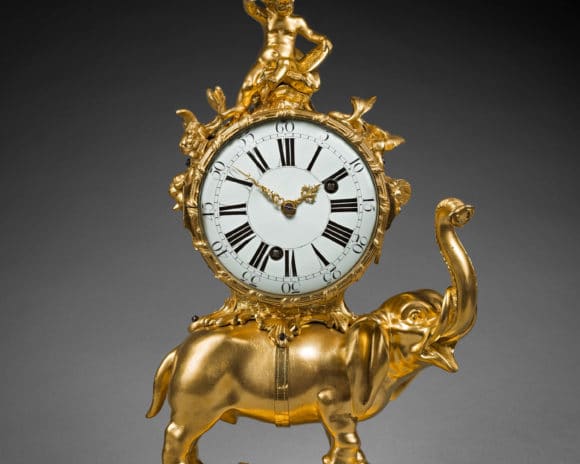 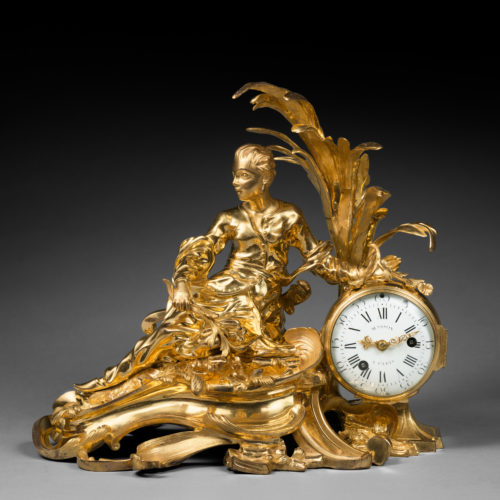