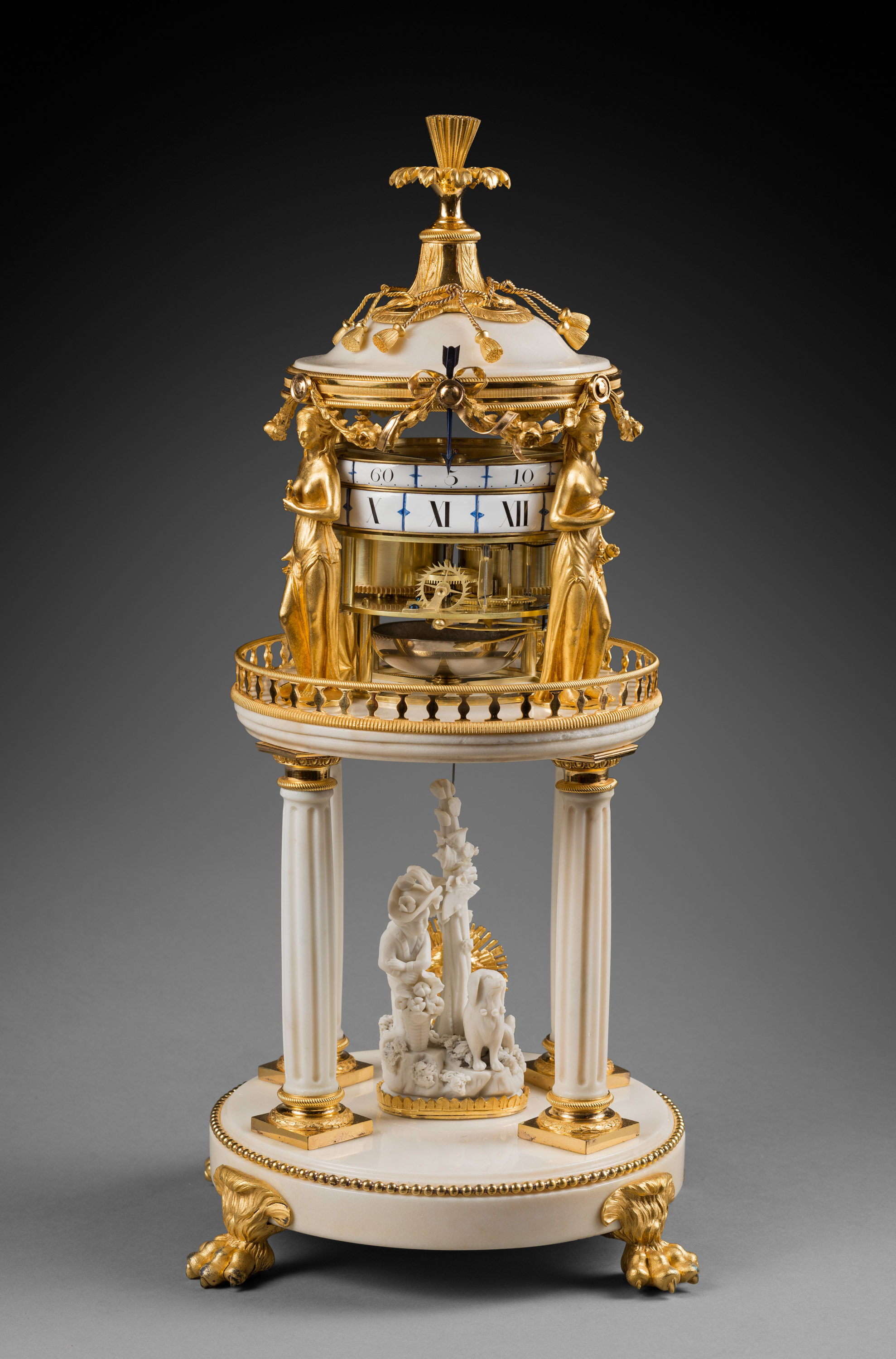 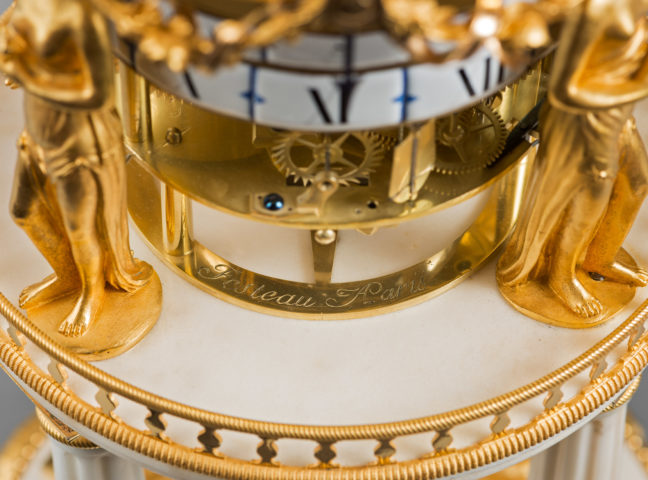 The present neoclassical rotunda-form temple is in fact an elaborate and luxurious timekeeping instrument, made of finely chased bronze with matte and burnished finishing and white Carrara marble. The time is indicated on two cadrans tournants with enameled cartouches; the upper one indicates the five-minute intervals in Arabic numerals, and the lower one shows the Roman numeral hours, with the time being shown by a blued steel arrow hand. The hour- and half hour-striking movement is visible, being set on an entablature with pillars in the form of allegorical female figures that support the rimmed dome, which is adorned with a band composed of a triple knurled frieze that is further embellished with flower garlands that are hung from ribbon-tied roundels. The clock is surmounted by a plume that emerges from a tazza whose rim is adorned with leaves; it is further decorated with tassels. The round terrace, which features a balustrade and bears the signature “Festeau à Paris”, rests upon four fluted and shaped columns with capitals adorned with egg and dart friezes and bases embellished with laurel toruses. In its center stands a bisque porcelain group depicting a rocky terrain with a naturalistic tree trunk and tufts of grass, on which a boy is standing, accompanied by his dog. The round base, which has a sunken rim adorned with a beadwork frieze, rests upon four lions’ paw feet.

The remarkable rotunda design of the present mantel clock in the form of an antique temple was inspired by the “Temple of Love” that was built in 1778 by architect Richard Mique at the request of Queen Marie-Antoinette; it stood in the garden of the Petit Trianon. That royal construction, called a “fabrique”, was unanimously admired for its perfect beauty and harmonious proportions. It inspired many examples of the French decorative arts of the time, including horological pieces. From the time of its construction of the queen’s rotunda, it served as direct or indirect inspiration for rotunda, or “temple” clock models. Thus, in 1786, an example that was probably quite similar to the present clock stood in the drawing room of Charles-Guillaume-Louis, Marquis de Broglie; its value was estimated at 144 livres: “A mantle clock with cadran tournant, with four white marble columns, with striking and gilt copper ornaments, and a small bisque figure”. Today only a small number of similar models are known to have survived. Two examples deserve particular mention: the first is in the Paris Musée des Arts Décoratifs, while a second example is in the Kunstindustrimuseet in Copenhagen (illustrated in Tardy, La pendule française, 2ème Partie, Du Louis XVI à nos jours, Paris, 1974). The signature “Festeau à Paris” might be that of several Parisian clockmakers from the same family, which was active during the two final decades of the 18th century. Nevertheless, it would seem that Jacques-François Festeau (1725-après 1789) was the maker of the présent clock.


The son of a master, after himself becoming a master in March 1751, he opened workshops successively in the Cour du Palais in 1752, the Marché-Neuf in 1758, the rue Saint-André des Arts in 1778, and in the rue des Canettes in 1781. He quickly gained renown and was much admired by important connoisseurs of Parisian luxury horology. 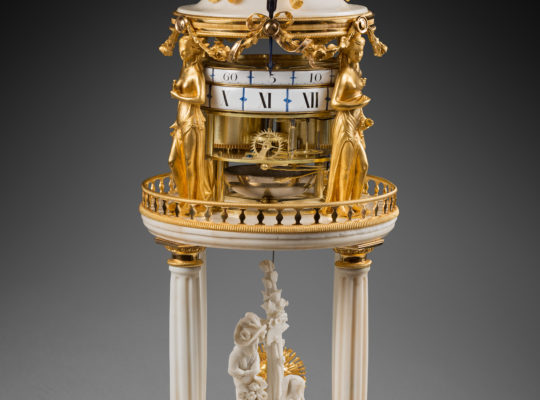 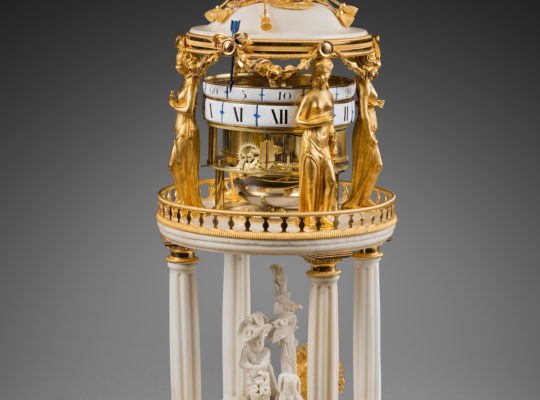 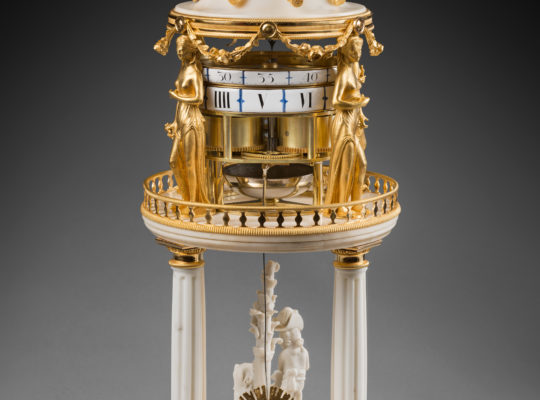 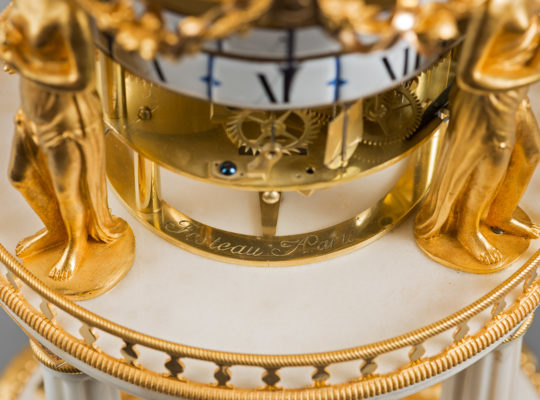 Write us
Call us
Print
Share
In the same category
Festeau 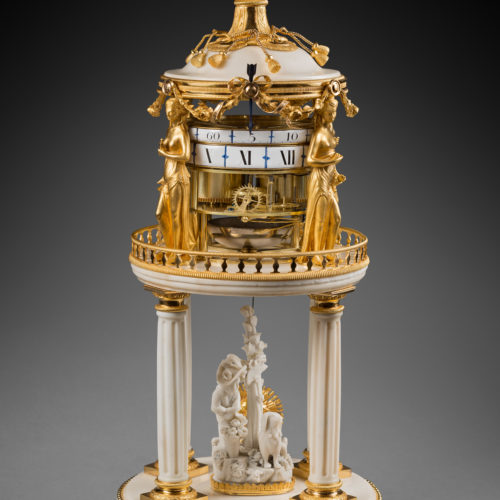