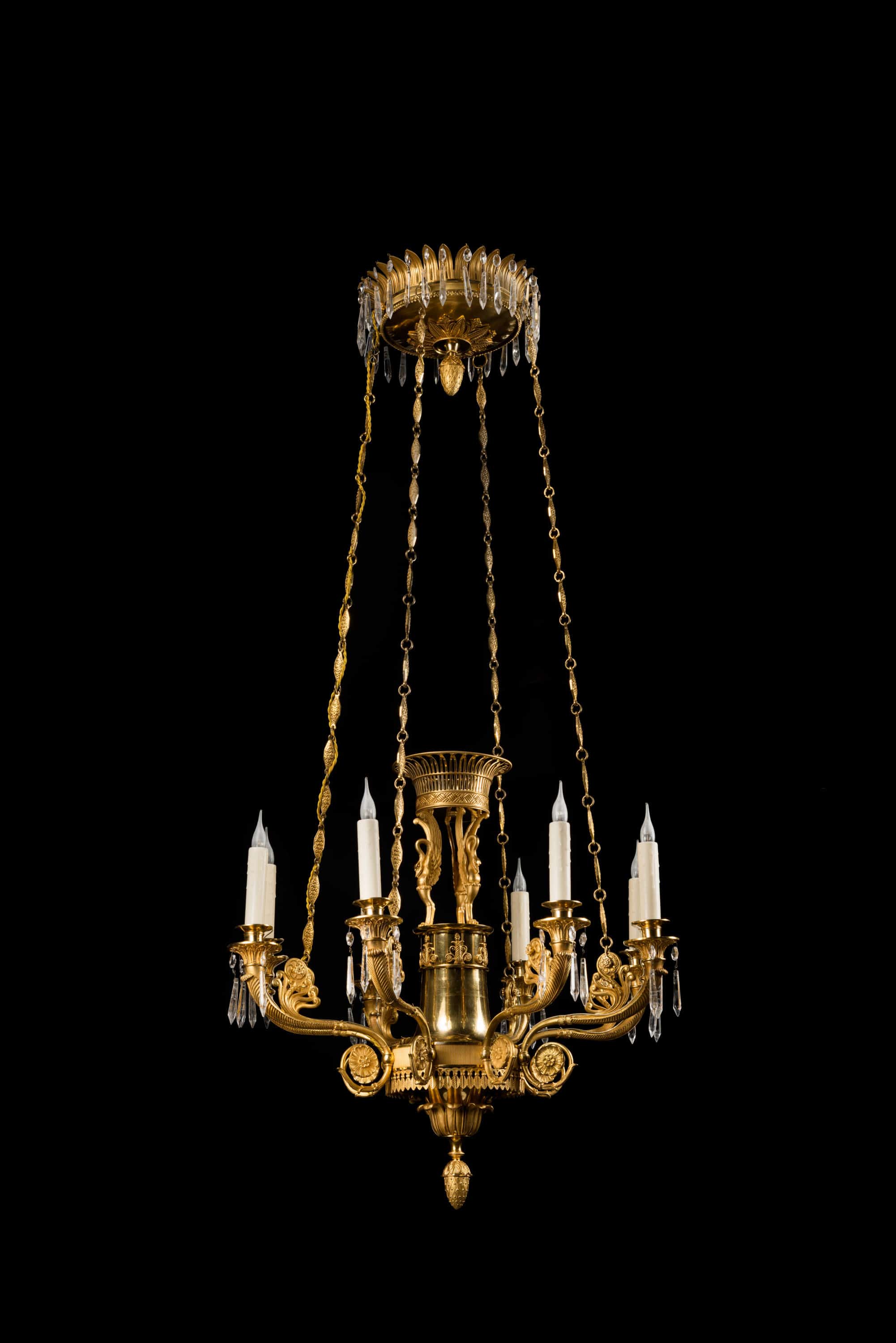 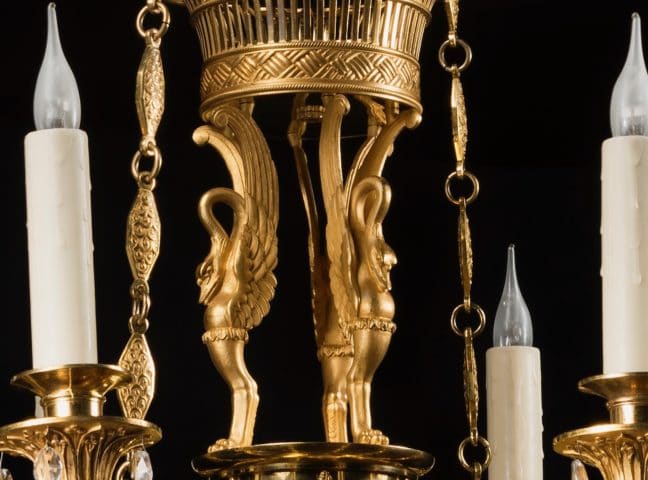 Made entirely of very finely chased gilt bronze with matte finishing, this important chandelier is composed of a round upper canopy that is adorned with wide stiff leaves with chased detailing, to which are attached small molded and faceted crystal prisms, and which is further adorned with a leaf motif centered by a pine cone finial. It supports four chains made up of rings and lozenge-shaped pieces that are chased with stylized scales and cabochons; from them is suspended the lower portion, in the form of a classical lamp. Decorated with stylized motifs, the latter supports an upside-down tapering vase that supports three swans with bent necks and lions’ paws, upon whose wings a pierced basket is set. The body of the lamp, which features a wide mille-raie band, issues the eight curved light arms, whose scrolls are decorated with rosettes and flowers and terminate in nozzles and drip pans; a frieze of leaves adorns the lower circular portion of the vase. A motif of curving water leaves terminating in a stylized pinecone decorates the lower part of the chandelier.

The remarkable design of this rare chandelier, and in particular the treatment of the basket supported by swans with curved necks, was inspired by the work of Parisian designers of the early 19th century, and especially those of the emperor’s architects Charles Percier and Pierre-François-Léonard Fontaine. Swan motifs appear regularly in the work of the two architects; they may be seen in contemporary furniture, horology, cabinetmaking, and bronze furnishings (see O. Nouvel-Kammerer, “Le cygne ambigu”, in the exhibition catalogue L’Aigle et le Papillon, Symboles des pouvoirs sous Napoléon 1800-1815, Musée des Arts décoratifs, Paris, 2008 p. 228-245). Our attribution of the present chandelier to the bronzier Pierre-Philippe Thomire is based on the quality of the chasing and gilding, as well as on the fact that Thomire was known to make use of the motif in his work, including in several elements of a surtout de table, one example of which is in the residence of the Ambassador of Great Britain in Paris (illustrated in J. Nérée Ronfort and J-D. Augarde, A l’ombre de Pauline, Paris, 2001, p. 64, fig. 45). A nearly identical chandelier is shown in plate 226 of a book in the Cyrillic alphabet that dates from 1950, which was devoted to important Russian collections of lighting instruments. 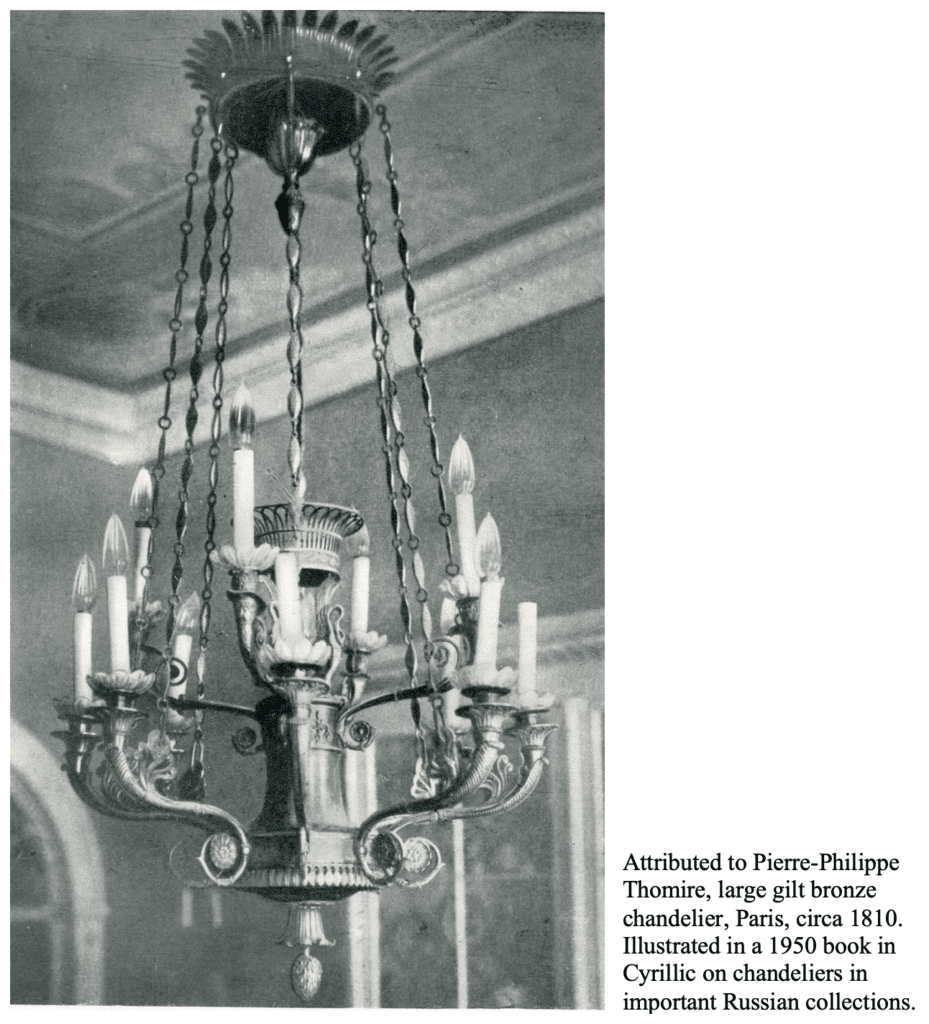 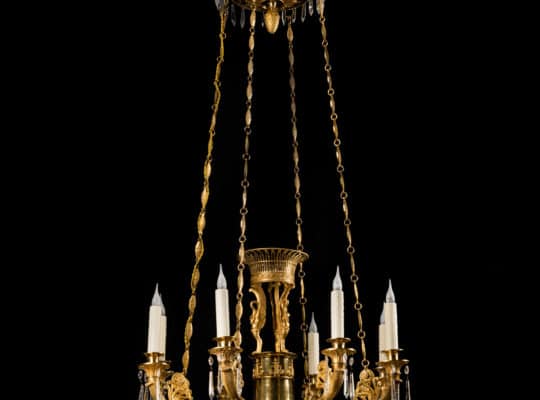 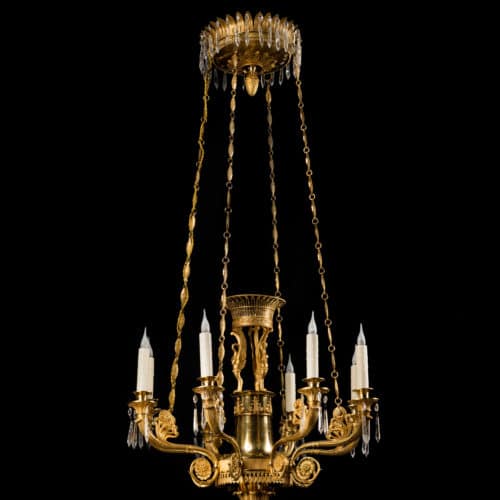