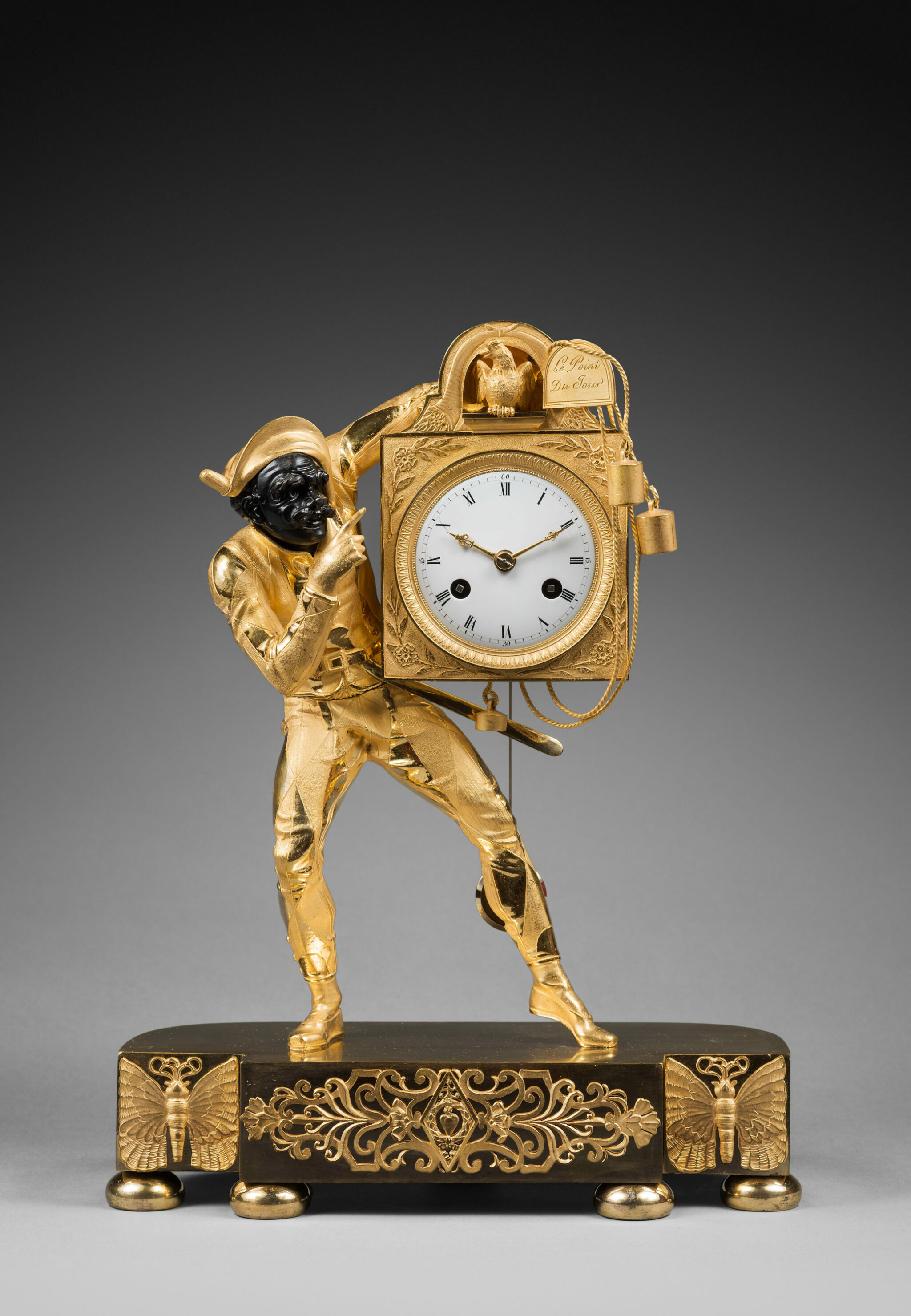 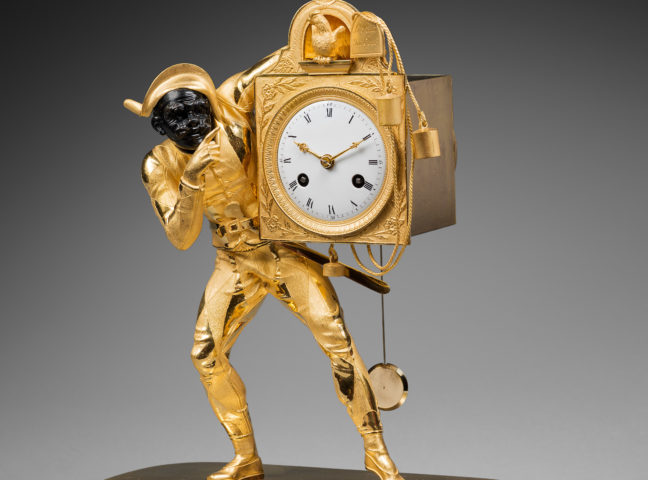 The round enamel dial features Roman hours and Arabic quarter hours, indicated by means of two pierced gilt bronze hands. The square case, modelled as an arch-top wall clock is adorned with cornucopias and a bird inspired by certain German clocks. The bezel is chased, with flowering branches in all four corners. The case is held by a Harlequin dressed in a motley vest and trousers made up of a patchwork of triangles. He is wearing a hat and his face is hidden by a patinated bronze mask. He has a thick moustache and bushy eyebrows, and appears to be pointing at the time with his right hand. The shaped quadrangular base features a central scrolling motif and a butterfly in each corner. The clock is raised upon five flattened bun feet.

This clock model, inspired by the characters of the Commedia dell’arte, became extremely popular during the late Empire period and the early years of the Bourbon Restoration. 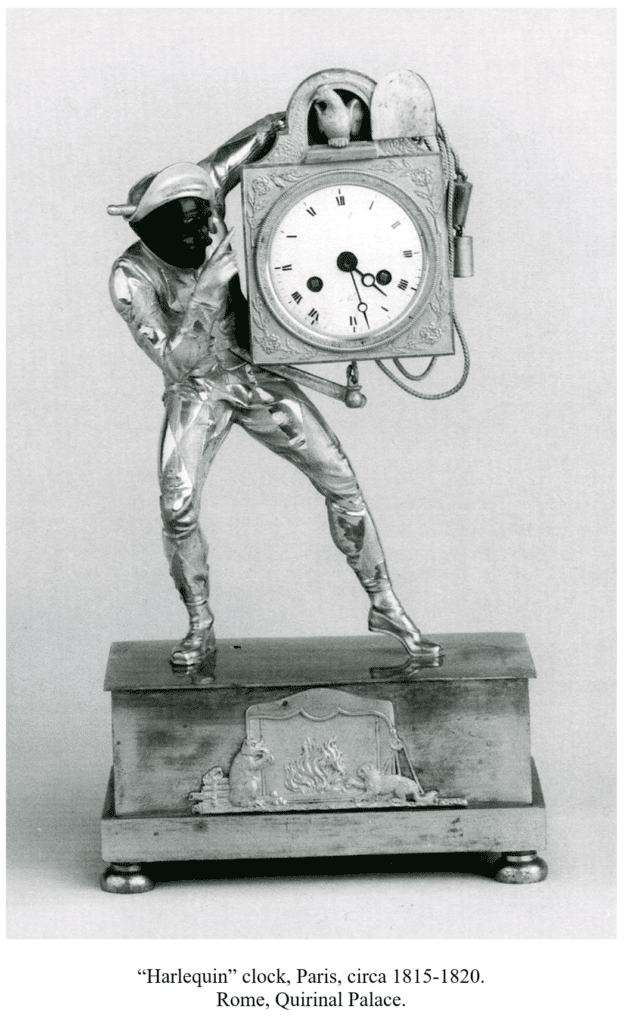 Only a very few similar clocks are known today; they often feature variations, particularly in the shape and decoration of the base. One such model is illustrated in E. Niehüser, Die französische Bronzeuhr, Eine Typologie der figürlichen Darstellungen, Munich, 1997, p. 168, fig. 270; a second clock, formerly in the collection of Charles-Ludovic de Bourbon, is today displayed in the Palazzo Riccardi in Florence. A third, formerly in the collection of Mrs. Charles Munn, was sold by Christie’s, New York, on November 1, 1989, lot 155; a fourth is in the Quirinal Palace in Rome (pictured in A. Gonzales-Palacios, Il Patrimonio artistico del Quirinale, Gli arredi francesi, Milan, 1996, p. 309, n° 90). Another similar clock, in the collection of Baron François Duesberg, is displayed in the Musée Duesberg in Mons (illustrated in Musée François Duesberg, Arts décoratifs 1775-1825, Bruxelles, 2004, p. 48). That clock is signed on the dial by horologist Louis Moinet, and is also signed by the bronzier Thomire; this allows us to attribute the present clock to that exceptional Parisian artisan. 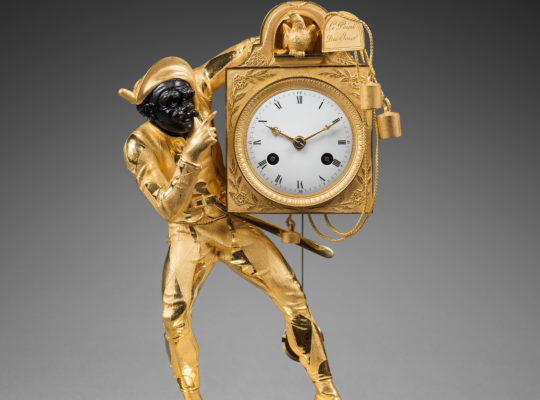 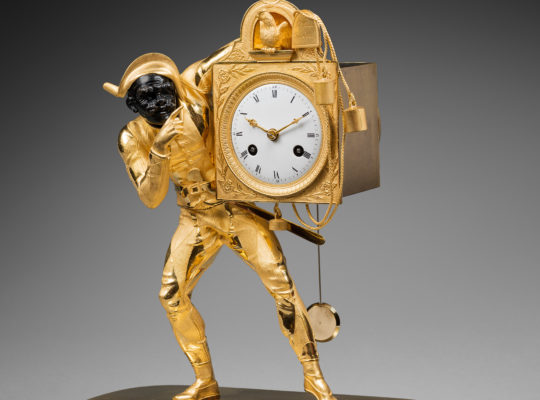 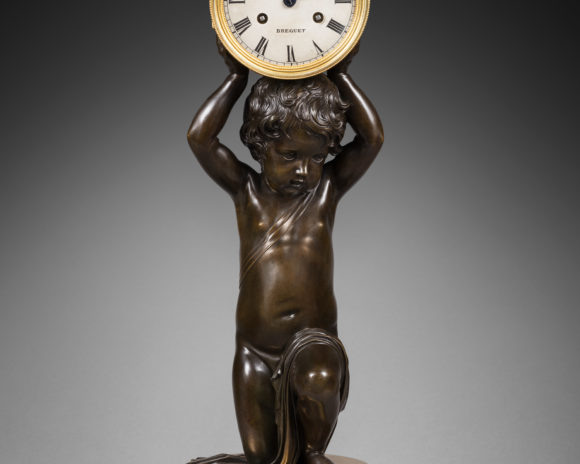 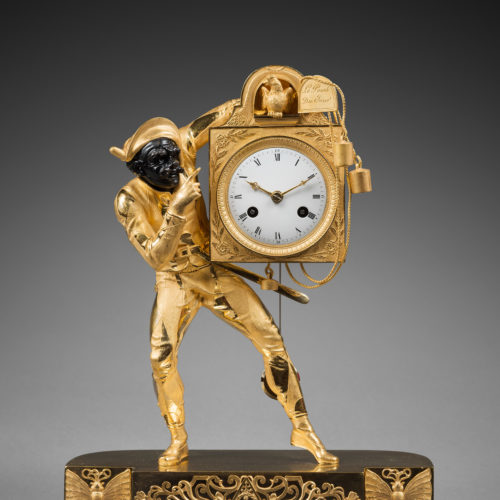