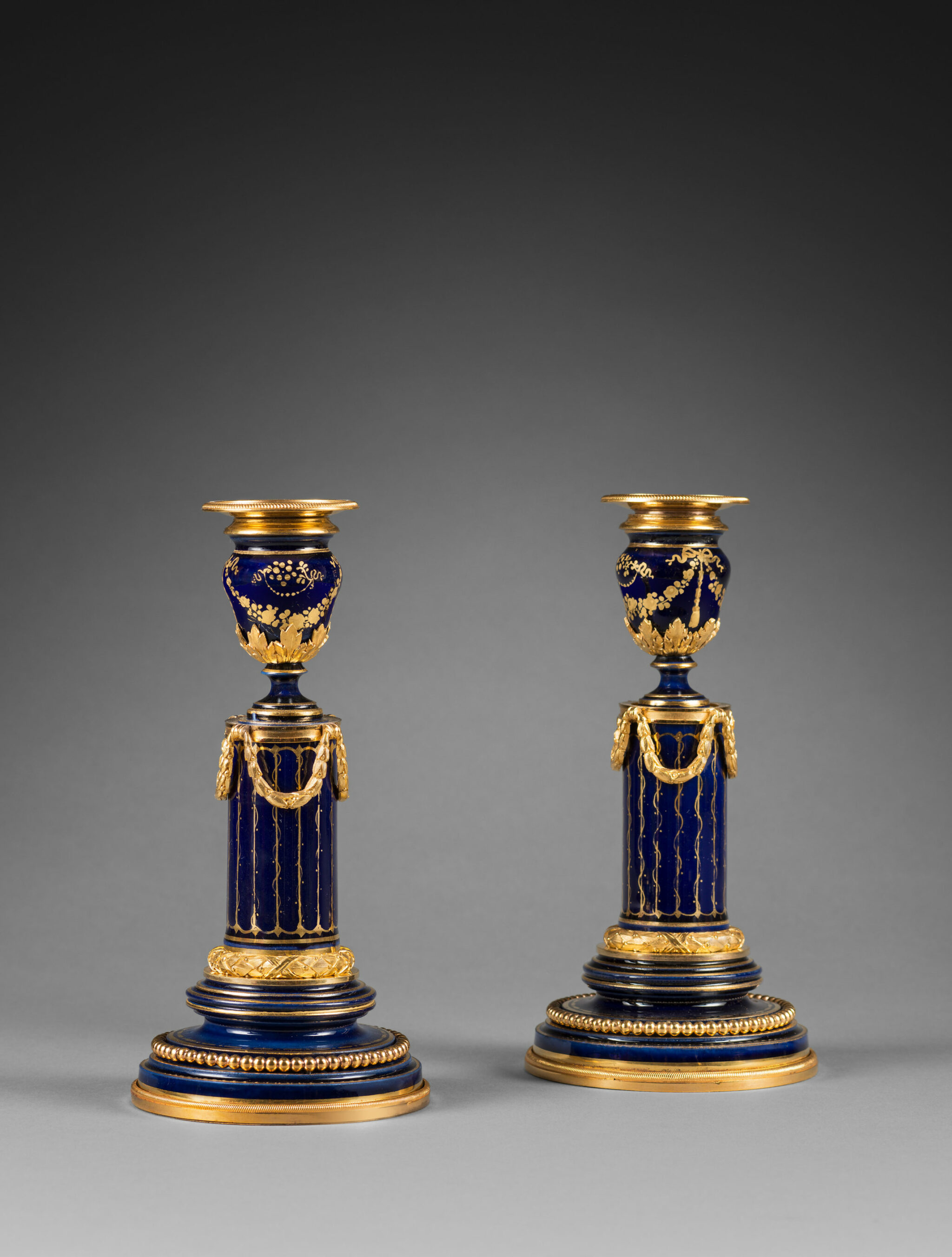 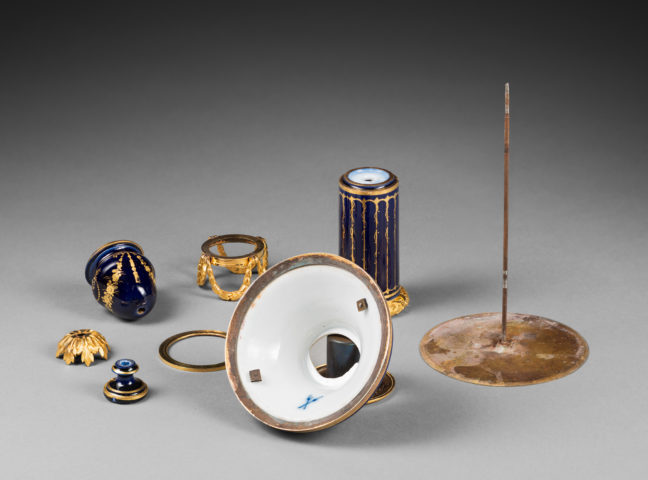 The present pair of candlesticks, whose design is characteristic of the most elaborate neoclassical works of art produced during the reign of Louis XVI, is particularly elegant. Made of porcelain with a lapis lazuli blue ground and gold highlights, and adorned with finely chased gilt bronze mounts with matte and burnished finishing, the candlesticks have a cylindrical stem that is decorated with thin lines that suggest fluting, as well as wavy lines and dots. They are surmounted by drip pans in the form of vases on molded pedestals that are decorated with flower and leaf garlands and rest on round molded bases that are adorned with gold bands. The candlesticks are elaborately embellished with chased gilt bronze mounts including friezes of braids, beadwork, beribboned laurel leaf and seed toruses, as well as leaf garland swags that are held in place by rings with matted reserves. Further decorations include an acanthus leaf bouquet from which the vase appears to emerge, and a knurled embellishment on the edges of the drip pans.

The remarkably sober design of the present rare pair of candlesticks exemplifies the maturity of an esthetic movement that began in Paris during the reign of Louis XV. It was encouraged by influential connoisseurs, artists, and artisans who were seeking a change from the artistic schemes and motifs that had until then dominated the French decorative arts, and which had been influenced by the Italian baroque style of the 17th century. The new decorative style was heavily influenced by the fabulous archaeological discoveries that had recently been made near Naples, and which had crystallized Europeans’ interest in the beauty and mysteries of Roman antiquity. In addition to its sober neoclassical design, the present pair of candlesticks is noteworthy for its juxtaposition of materials: porcelain and gilt bronze, in which – contrary to most contemporary creations – porcelain, rather than the metal, is the dominant material, the metal merely adding a further decorative highlight. Today only a few comparable candlesticks are known, including one model, which was not completed and is shown in a project for a bronze and porcelain mantel garniture made by the Manufacture de la Reine; sold by the merchant Granchez toward the middle of the 1780s, it is now in the French Bibliothèque Nationale in Paris (see the exhibition catalogue La Fabrique du luxe, Les marchands merciers parisiens au XVIIIe siècle, Musée Cognacq-Jay, Paris, 2018, p. 110-111). A second example, in which the twisted stem is adorned with delicate garlands of flowers (illustrated in M. Burckhardt, Mobilier Régence Louis XV, Paris, Editions Charles Massin, Paris, p. 66) was made by the Royal Sèvres factory. 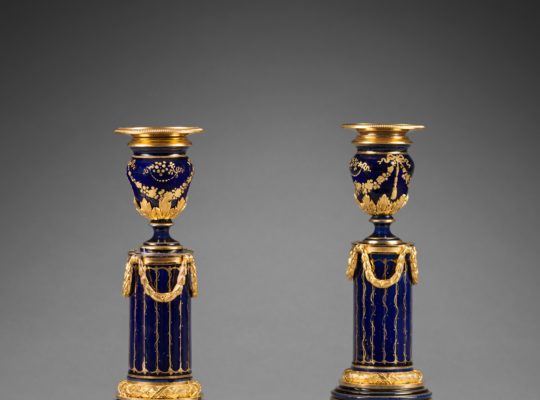 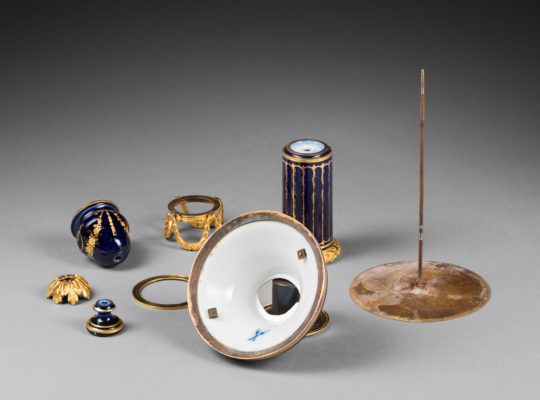 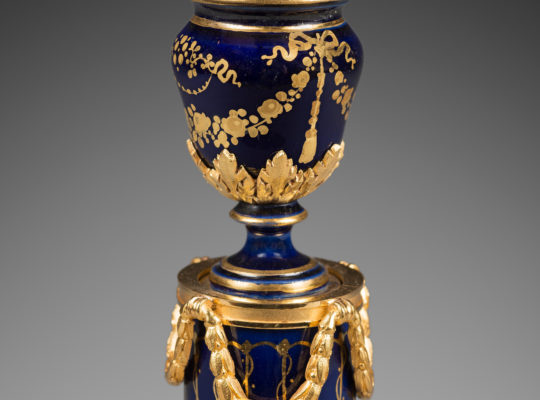 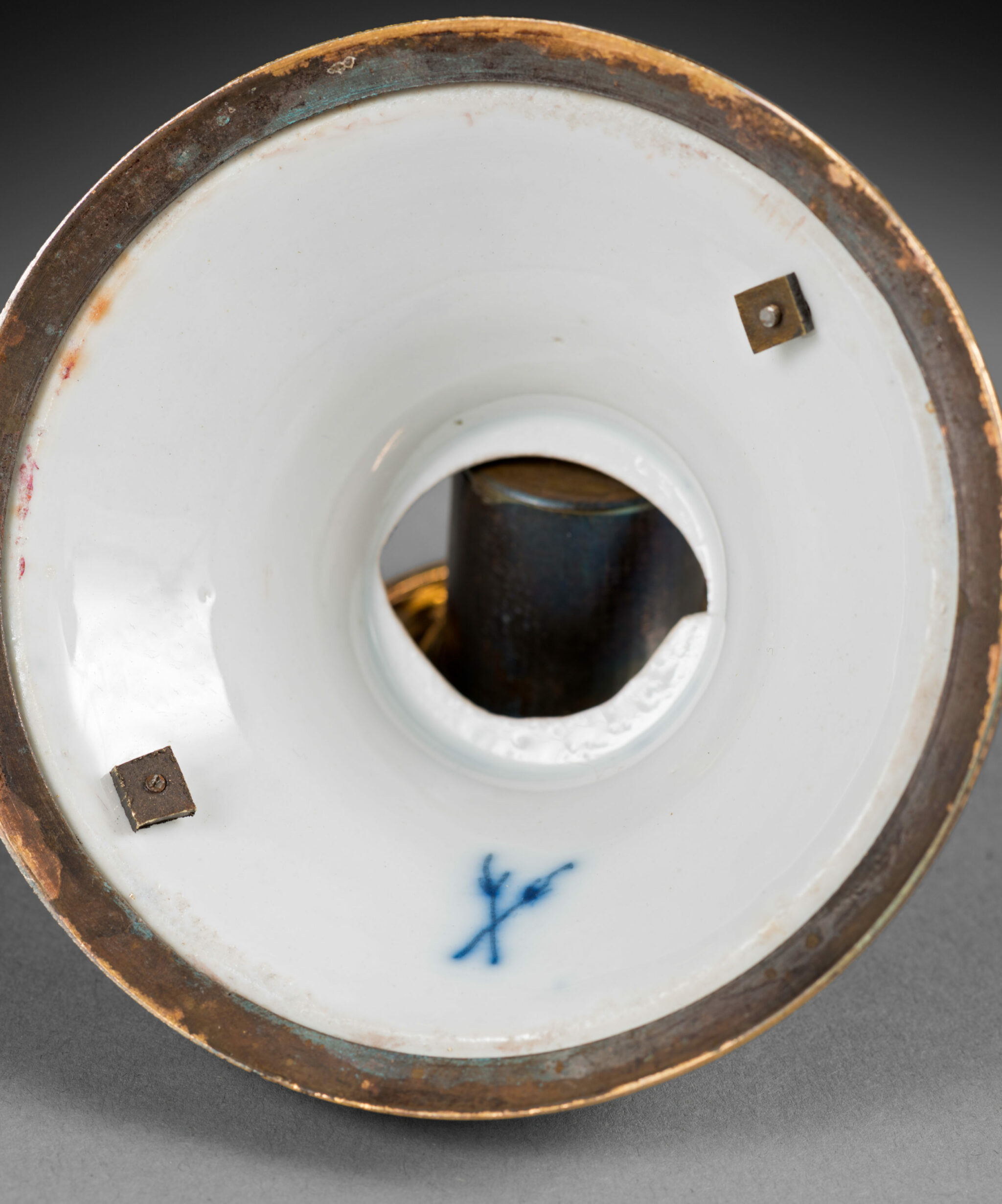 Write us
Call us
Print
Share
In the same category
Locré 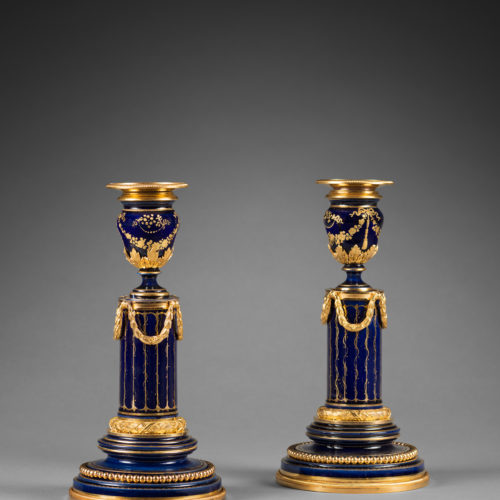