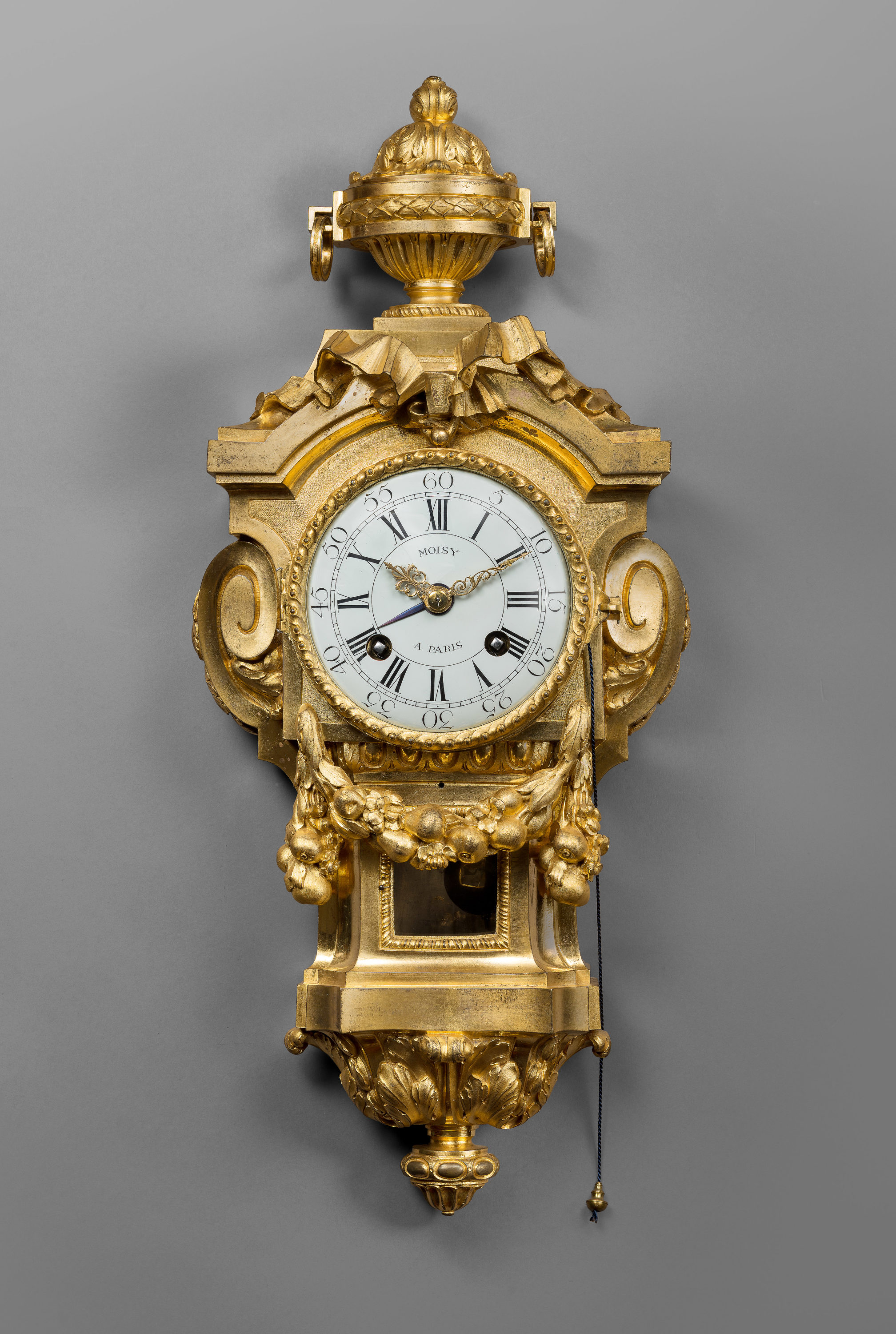 The enamel dial, signed Moisy à Paris, has Roman numerals for the hours and Arabic numerals for the minutes; the exceptional quality of the finely chased gilt bronze Neoclassical case allows it to be attributed to the renowned Parisian bronzier Robert Osmond. The bezel is adorned with an interlace motif; the arched pediment, accentuated by a matted reserve, is surmounted by a billowing ribbon bow; the sides are formed by imposing acanthus-decorated scrolls. An egg and dart frieze and a sumptuously chased flower and fruit swag animate the lower portion of the case, in which the glazed pendulum aperture is framed by a striated frieze; the case terminating in an acanthus leaf bouquet with a chased finial. The whole is surmounted by an antique-style urn decorated with laurel leaf toruses, inlaid fluting, pierced handles with mobile links and a cover adorned with acanthus leaves and an acanthus-wrapped finial.

Several cartels relate to the present example, in particular an apparently one-of-a-kind example that is signed by Osmond, today in a private collection (see H. Ottomeyer and P. Pröschel, Vergoldete Bronzen, Band II, Munich, 1986, p. 544, fig. 7); a second example is in the Hermitage Museum in Saint Petersburg (illustrated in M. Gay, « Présence horlogère française à Saint-Pétersbourg », ANCAHA, Spring 2008, n° 111, p. 13) a third, in sculpted gilt wood, is illustrated in S. de Ricci, Le style Louis XVI, Mobilier et décoration, Hachette et Cie, p. IX. While these clocks are similar, to the best of our knowledge this cartel is a one-of-a-kind piece, probably specially commissioned in the early 1770’s by a Parisian connoisseur. It may be related to the example described in the 1774 inventory drawn up after the death of the widow of Anne-Charles-Frédéric de la Trémoille, Prince de Talmont, one of the most important collectors of the time: “A clock in its gilt bronze cartel with enamel dial marking the hours and minutes, bearing the name Moisy à Paris…”  (Archives Nationales, ET/XCI/7 January 1774).


Jean Moisy is one of the most important Parisian clockmakers of the 18th century. He worked with the bronziers Caffieri and Osmond, and furnished two clocks to King Louis XV for the Château de Saint-Hubert. Working with the influential  marchands-merciers of the time, Moisy built up an exceptional clientele, including members of the aristocracy such as the Duke de Praslin, the Prince de Talmont and the Duchess d’Enville, and financiers such as the powerful Randon de Boisset, Marin de La Haye and Pâris de Montmartel. 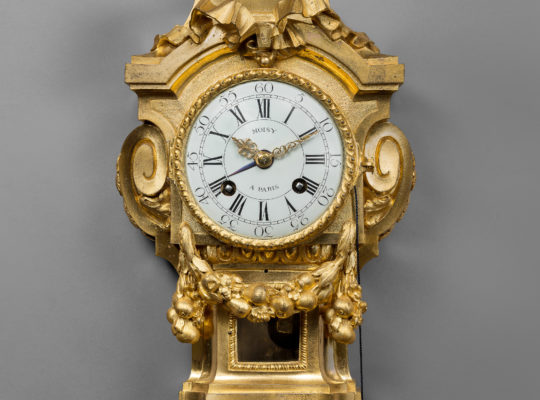 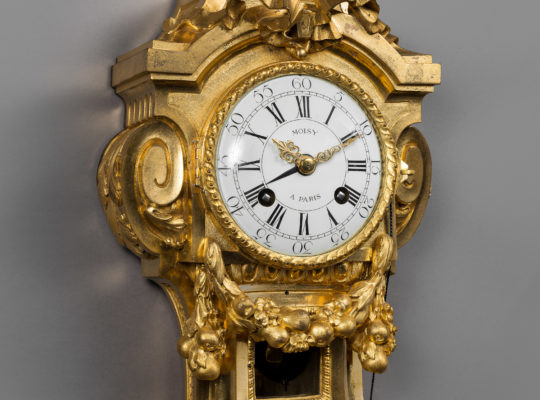 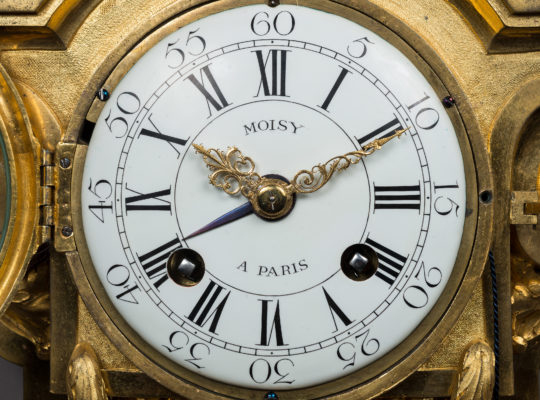 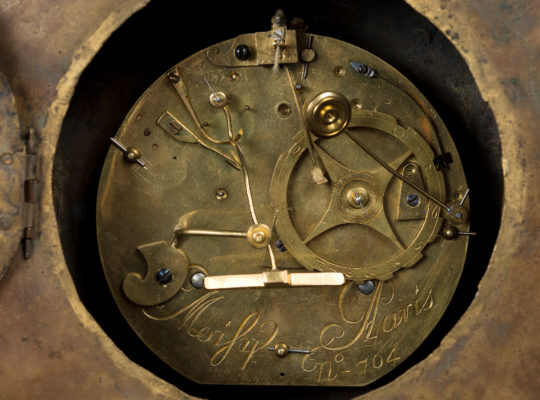 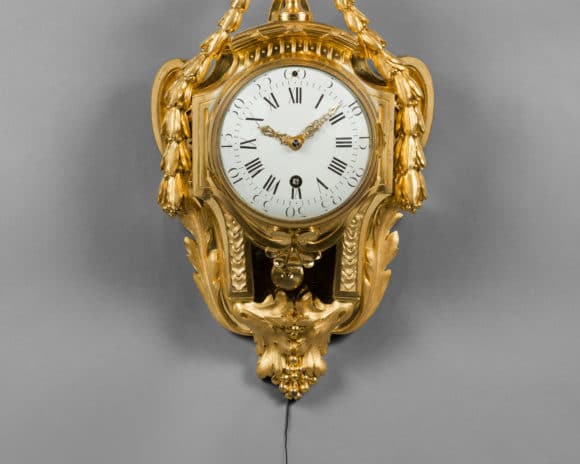 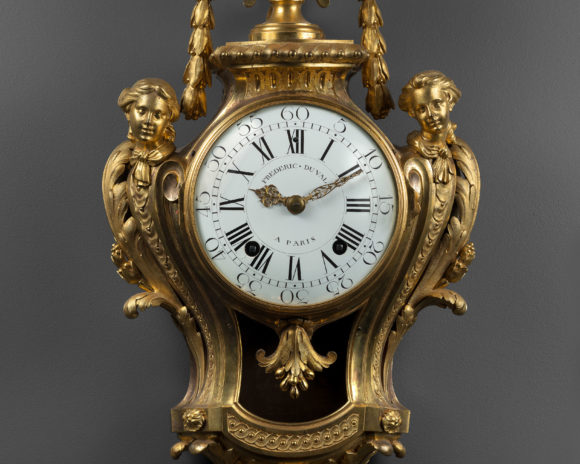