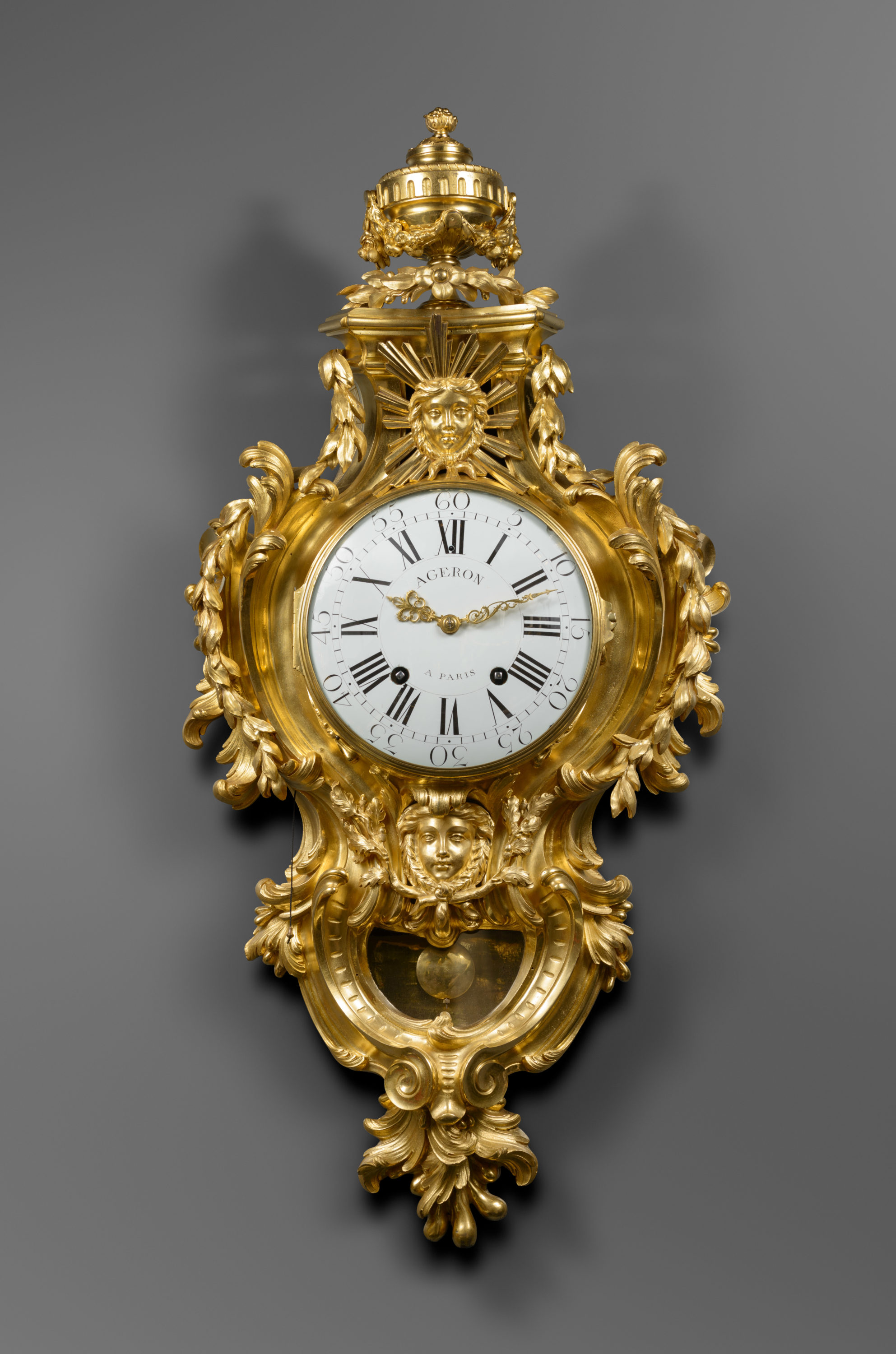 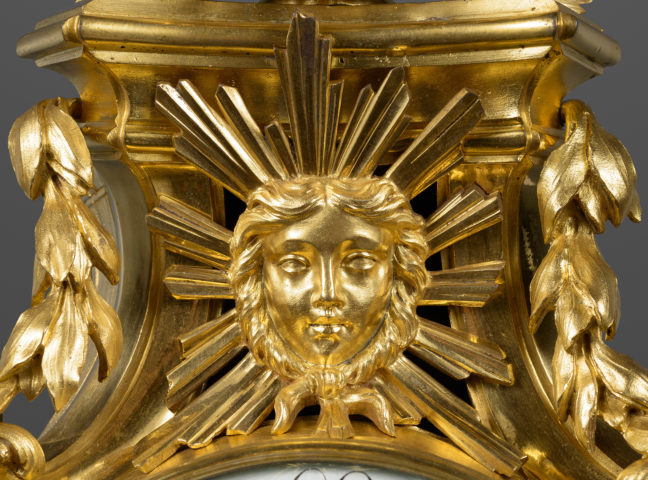 The round white enamel dial, signed “Ageron à Paris”, indicates the Roman numeral hours and the Arabic numeral five-minute intervals by means of two pierced gilt bronze hands. The movement, with pull hour, half hour, and quarter repeat, is housed in a magnificent chased gilt bronze case. The clock is surmounted by a lidded urn with a seed finial; the urn is adorned with fluting and flower and leaf swags suspended from pastilles. The upper portion, with an architectural entablature, features a mask with radiating sunrays with laurel leaf swags on either side. The curved sides of the clock are adorned with scrolls and acanthus leaf volutes. Beneath the dial, a second masque has braids that are tied around acorn-decorated oak branches. The clock terminates in a leaf and seed bouquet.

This important wall cartel stands out due to its particularly unusual design. It is reminiscent of certain rocaille models of the Louis XV period, while also featuring several classical motifs that foreshadow the neoclassical style that flourished in Paris during the mid 1760’s. Its elaborate design was inspired by the work of Parisian ornamentalists, including Jean-François Forty (see Tardy, La pendule française, 2ème Partie : Du Louis XVI à nos jours, Paris, 1975, p. 306). To the best of our knowledge, there is only one other identical wall cartel clock, which appears to have been undergone extensive esthetic and technical modifications. It was offered at auction during the sale of the collection of Georges Bensimon (sold Paris, Hôtel Drouot, Mes Couturier-Nicolay, November 18-19, 1981).


François Ageron is one of the most important Parisian clockmakers of the 18th century. After becoming a master on July 17, 1741, he opened workshops successively in the Place du Pont Saint-Michel, the quai des Augustins, the rue Saint-Louis au Palais and the Place Dauphine. He quickly gained a reputation among the important Parisian horological collectors, becoming known for his movements, which often feature complications. Like most of the fine clockmakers of the time, he called on the best artisans for his clock cases, including the cabinetmaker Balthazar Lieutaud and the bronze casters Saint-Germain, Caffieri and Osmond. He stopped working in the early 1780’s and his business was sold on May 31, 1784. During the 18th century, his clocks were mentioned in important private collections, including those of François-Ferdinand, Comte de Lannoy, René-François-André, Comte de la Tour du Pin and Vicomte de La Charce, and Christian IV, Count Palatine of Zweibrücken. One of the clocks made by Ageron was described in 1787; it was in the bedroom of Queen Marie-Antoinette’s small apartments of in the Château de Versailles. 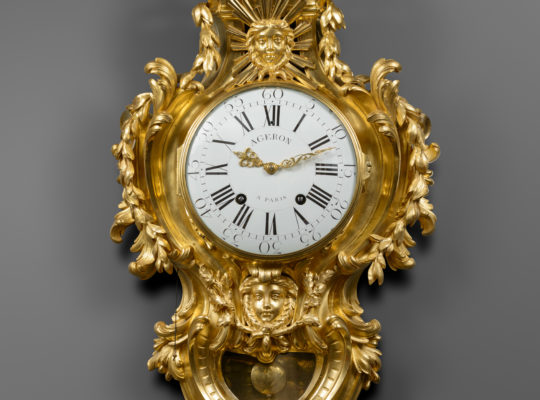 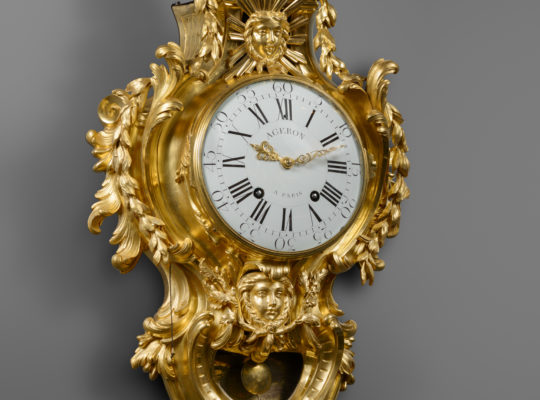 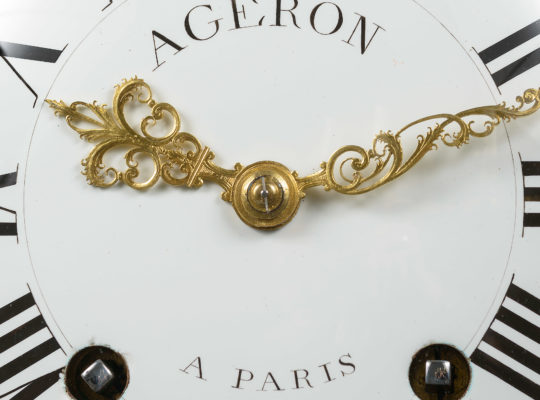 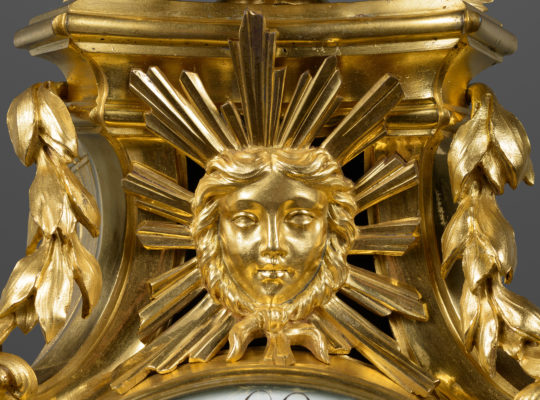 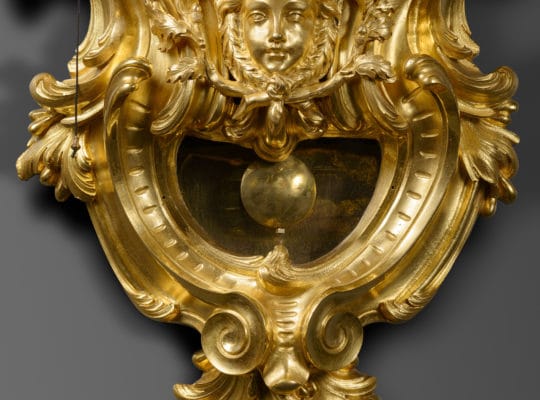 Write us
Call us
Print
Share
In the same category
Ageron 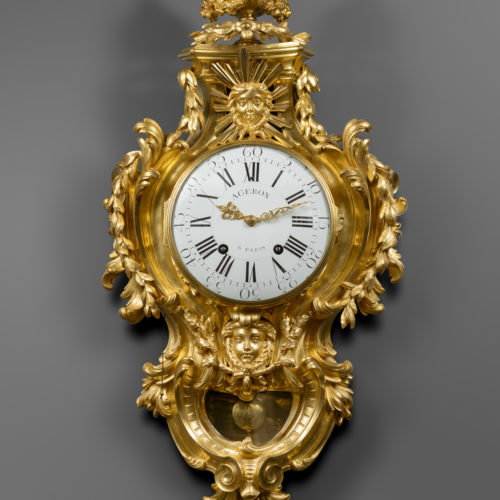