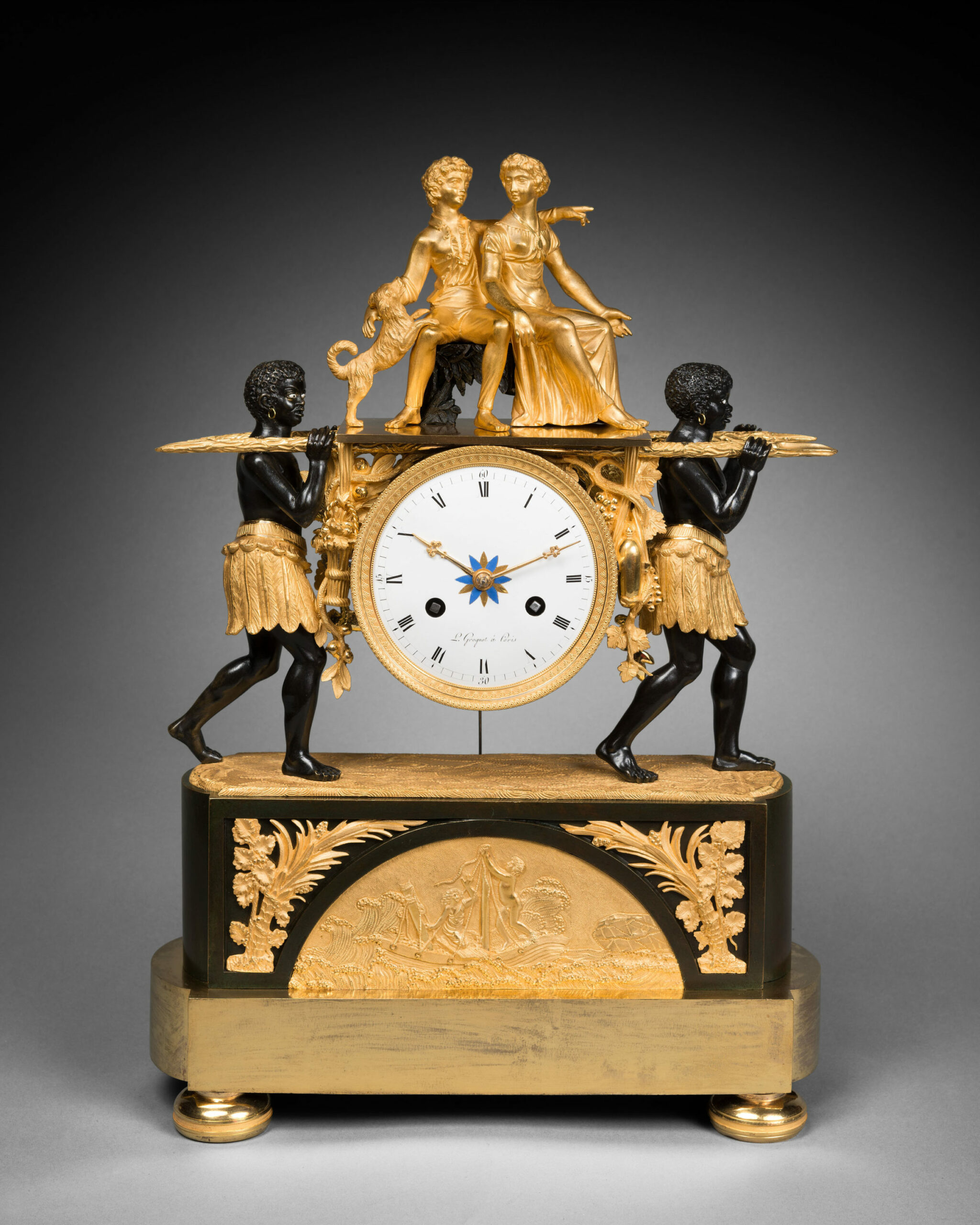 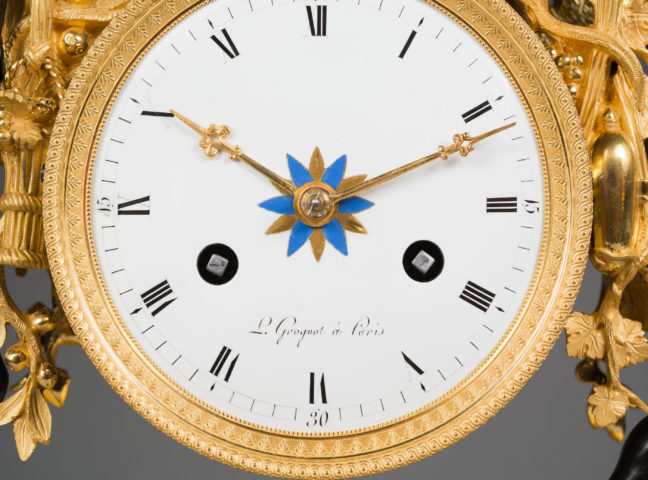 The round white enamel dial, signed “L. Grognot à Paris”, indicates the Roman numeral hours and the Arabic fifteen minute intervals by means of two pierced gilt bronze hands that are fixed to the center of the dial in the middle of a gold and azure colored flower. The hour and half-hour striking movement is housed in a drum case that is decorated with vines and is attached to a palanquin born on stretchers that rest on the shoulders of two finely sculpted young black men with enamel eyes, who are wearing earrings and feather loincloths. Surmounting the clock, on a plain terrace, are two young people sitting on a log. A dog rests his paws on the right knee of a young man who is talking with a young woman who turns toward him. The group depicts Paul and Virginie, the heroes of the novel by Bernardin de Saint-Pierre. The clock is supported by a tall quadrangular base with rounded corners, whose façade is adorned with applied motifs representing two lemon trees and vines that flank a low relief, semi-circular scene depicting the shipwreck of the Saint-Géran, one of the most important episodes of Bernardin de Saint-Pierre’s novel. The clock stands on four flattened ball feet that are embellished with mille-raie friezes.

In the latter part of the 18th century, under the influence of the philosophical writings of Jean-Jacques Rousseau, who exalted the virtues of a return to Nature through the myth of the “noble savage”, exoticism became extremely fashionable; this fashion was amplified by contemporary literature. The great success of  “Paul et Virginie” by Bernardin de Saint-Pierre in 1788, a latter-day echo of the well-known “Robinson Crusoe” by Daniel Defoe, Marmontel’s novel “Les Incas”, which was published during the American Revolutionary War, and Chateaubriand’s “Atala”, published in 1801, profoundly changed Europeans’ vision of other civilizations, creating a strong romantic nostalgia for a longed-for Pagan paradise, which would be transcended by Christianity. As often occurred in the French decorative arts, this change manifested itself in certain artistic creations, particularly in the fields of horology and lighting. The present clock was created within that context. Its model, known as “The Stretcher Bearers”, is one of the rarest types of  “au nègre” clocks.

Only a handful of similar clocks are known to exist; these present several variations. One example, which is surmounted by a monkey, is illustrated in P. Kjellberg, Encyclopédie de la pendule française du Moyen Age à nos jours, Paris, 1997, p. 344. A second clock, of the same model as the present example, was made by the bronzier Louis-Isidore Choiselat, known as Choiselat-Gallien; it is pictured in H. Ottomeyer and P. Pröschel, Vergoldete Bronzen, Die Bronzearbeiten des Spätbarock und Klassizismus, Band I, Munich, 1986, p. 379, fig. 5.15.20. It forms the basis for our attribution of the present clock to Choiselat, an important Parisian bronzier of the Empire period. Two other clocks are known to be identical to the present one; the first is in the well-known horological collections of the Musée François Duesberg in Mons (see the exhibition catalogue “De Noir et d’Or, Pendules ‘au bon sauvage’”, Musées Royaux d’Art et d’Histoire, Brussels, 1993). The second clock, formerly in the Renoncourt collection, is illustrated in S. Chadenet, Les styles Empire et Restauration, Editions Baschet et Cie, Paris, p. 177, fig. 1. 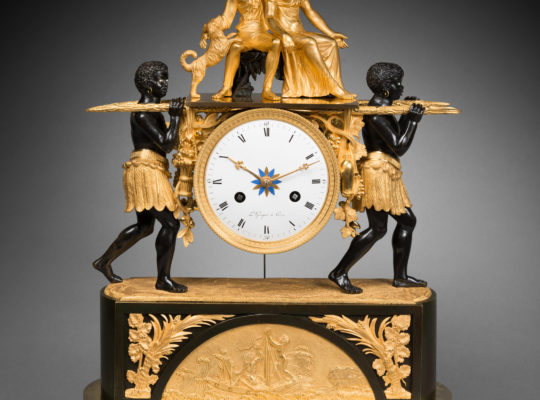 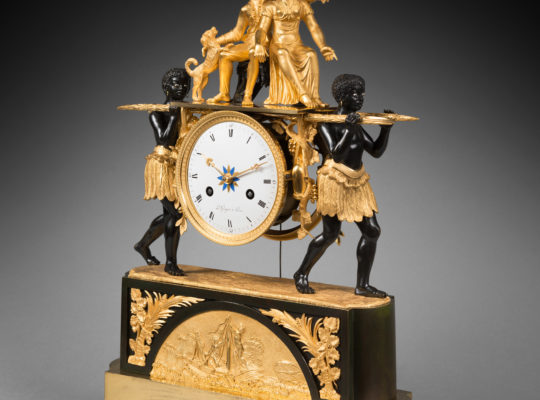 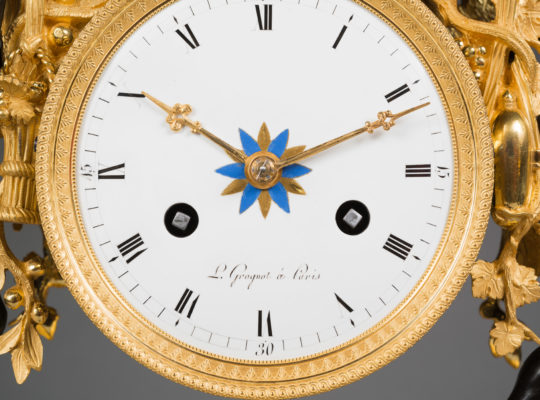 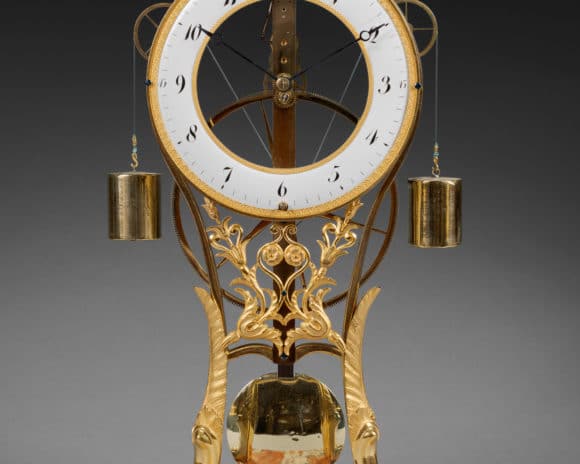 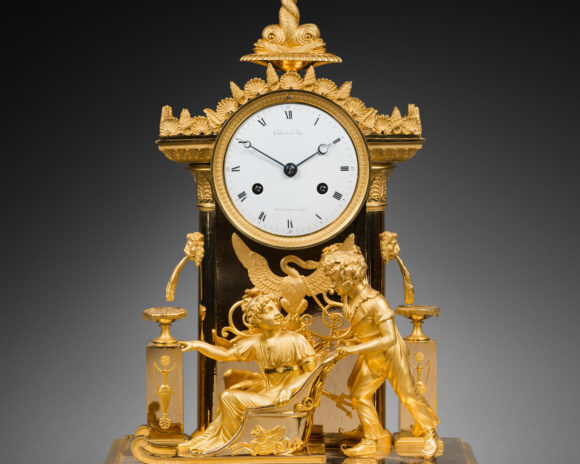 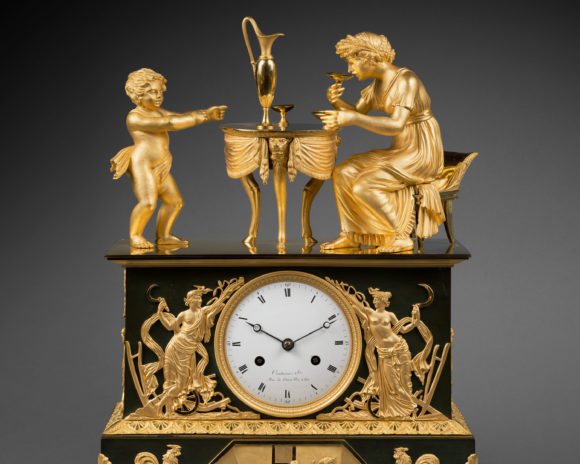 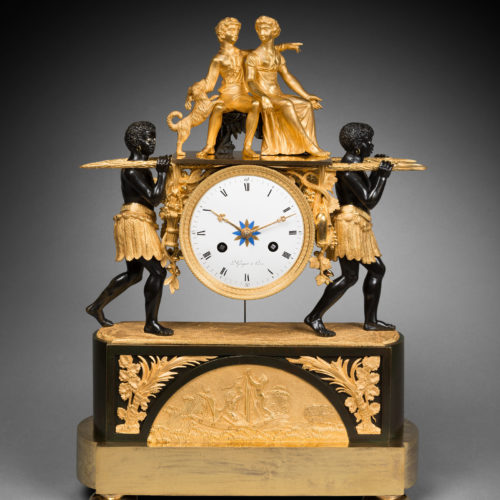