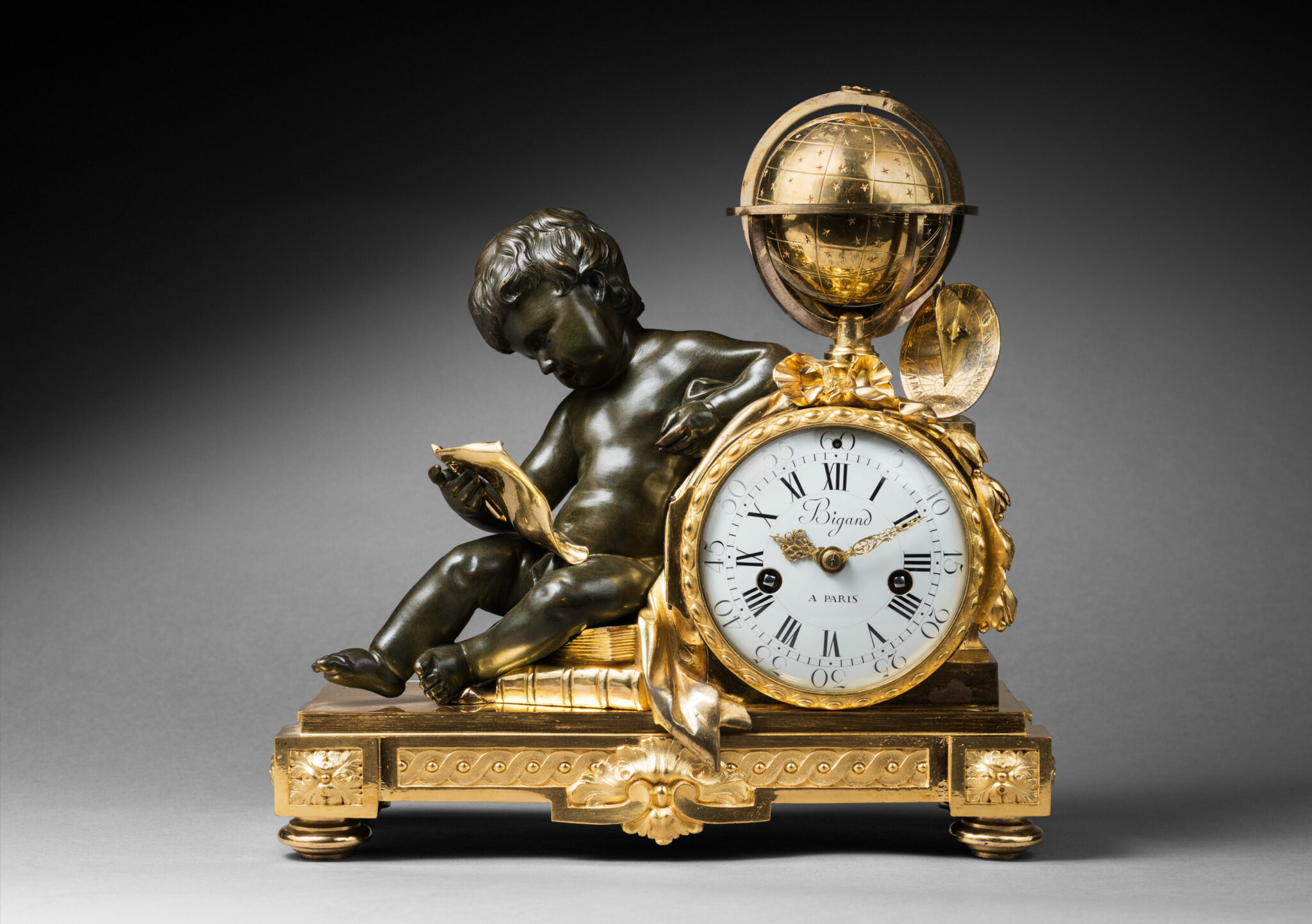 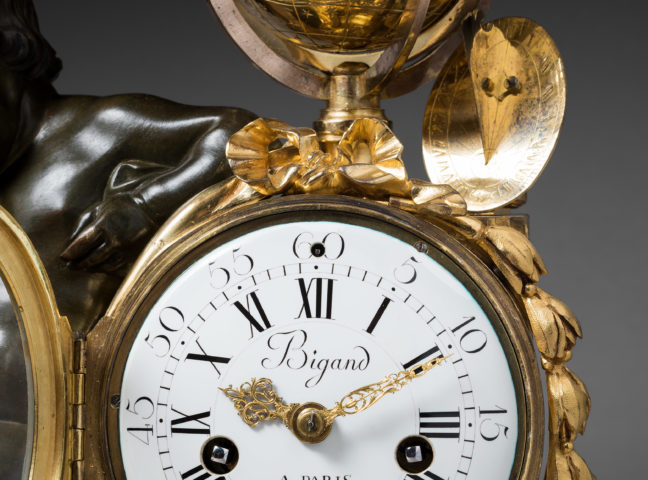 Paris, Transition between Louis XV and Louis XVI periods, circa 1765-1770

– Formerly in the collection of the dukes of Fitz-James.

The round white enamel dial, signed “Bigand à Paris”, indicates the Roman numeral hours and the Arabic numeral five-minute intervals, by means of two pierced gilt bronze hands. It is housed in a finely chased architectural case made of gilt and patinated bronze. The movement is housed in a fluted cippus-shaped case whose bezel is decorated with an interlace and egg and dart frieze that is decorated with ribbons and a drapery, and a swag of laurel leaves and seeds. It is surmounted by a compass, a sundial, and a celestial globe. A young child, who is seated on books and holds a stylus in his hand, leans against the case as he examines a parchment roll. The oblong plinth rests upon a quadrangular base with protruding corners that are adorned with stylized rosettes and interlace and egg-and-dart friezes surmounted by scrolling foliage. The clock is raised upon four flattened ball feet.

The unusual architecturally-inspired design of this clock is characteristic of the pieces made during the final years of the reign of King Louis XV, which favored a strict neoclassical style with classically-inspired motifs. The figure of the child in the present clock is identical to that of an ivory statuette by François du Quesnoy, which is in the Musée d’Ecouen (see M. Boudon-Machuel, François du Quesnoy 1597-1643, Paris, 2005, p. 351). This beautifully proportioned model was extremely popular among the important Parisian collectors of the late 18th century. 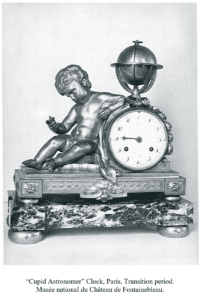 
Jean-Noël Bigand (also Bigaud) is one of the most important Parisian clockmakers of the second half of the 18th century. The son of a master clockmaker, after becoming a master himself on February 27, 1743, he opened a workshop in the rue Dauphine. In 1748 he moved to the rue du Petit-Bourbon, where he remained until 1781. He quickly earned a reputation among clock collectors. During the 18th century, his clocks were purchased by many of the great connoisseurs of the time. They appear, for example, in the probate inventories of the prosecutor Jean Vaufrouard and  Alexandre-Louis de Saint-Chamans, the Marquis of Saint-Chamans. 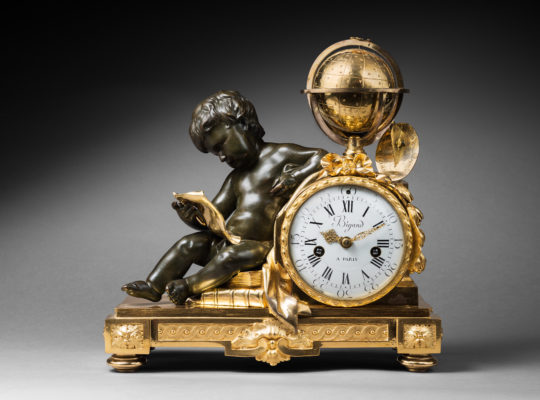 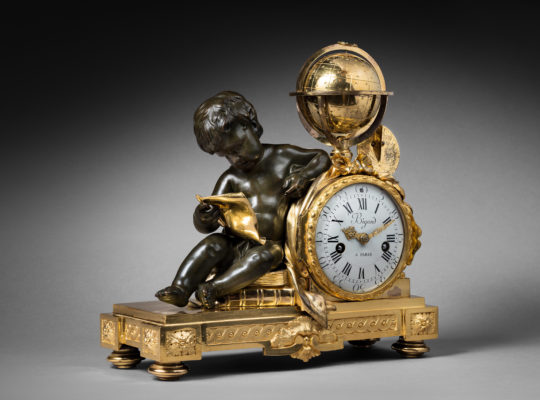 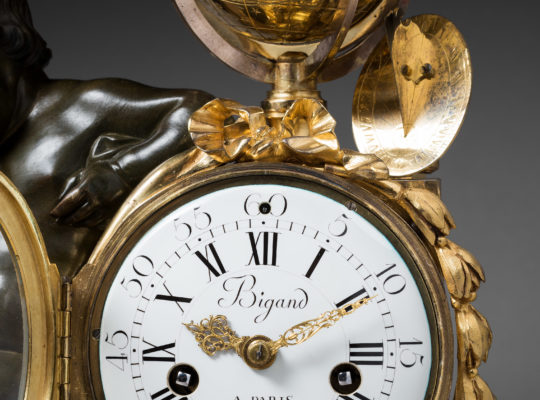 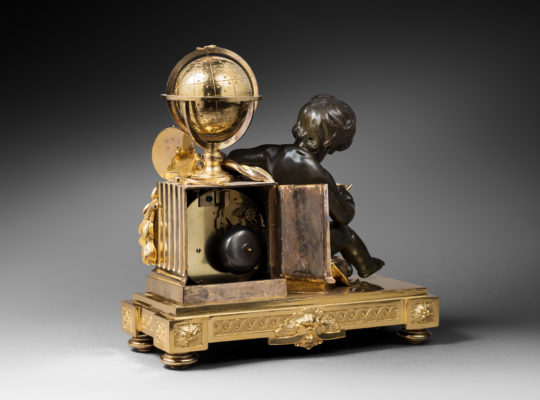 Write us
Call us
Print
Share
In the same category
Bigand 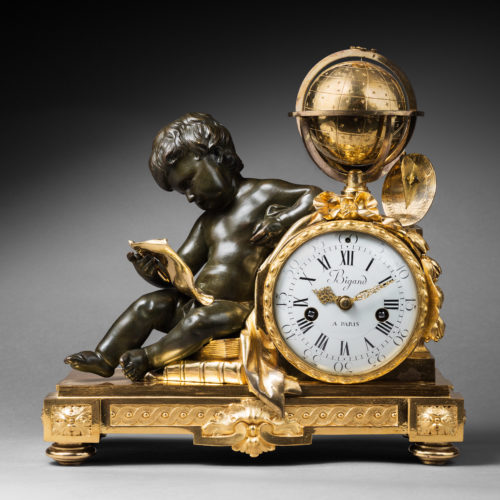