Pierre II Leroy ou Le Roy came from one of the most important French horological dynasties, active throughout the 18th century and the early decades of the 19th century. The son of Pierre Julien Le Roy, master clockmaker in Tours, he began his training with his brother Julien II Le Roy (1686-1759) in their father’s workshop, then settled in Paris in 1710. There he was a compagnon and ouvrier libre. He became a master on October 30, 1721 by the decree of 1721, which exempted him from apprenticeship. His career truly began when he opened a workshop in the Cour de Lamoignon.

He quickly gained the attention of contemporary connoisseurs and was soon obliged to move to larger premises.  In 1738 he moved to the Place Dauphine, in 1757 to the rue Dauphine, and in 1762 to the rue de Hurepoix. An active member of the Société des Arts, he was well known and much admired in his guild, acting as Garde-visiteur from 1744 to 1748. He worked to perfect the movements of timekeepers, presenting several inventions to the Académie des Sciences. Among these were a clock made in 1728 showing true time, with an equation circle.

Like other important Parisian artisans of the time, Pierre II Le Roy chose the best cabinetmakers and bronziers for his cases, often working with the Caffieris, Jean Goyer, Joseph de Saint-Germain and Charles Cressent, all of whom count among the most talented furniture makers and bronziers of the day. Having become a Fournisseur du Garde-meuble de la Couronne through the influence of marchand-mercier Thomas-Joachim Hébert, he gained an aristocratic clientele that included the Prince de Condé, the Marshal de Richelieu and the Duchesses d’Halincourt and du Maine, as well as important bankers and financiers such as Grimod du Fort, Bouret de Valroche and Gaignat, the Court banker Nicolas Beaujon and Madame Paris de Montmartel. Today his pieces may be seen in the most important private and public collections around the world; among these, the Residenz in Munich, the Royal Spanish collections “Patrimonio Nacional” and the Louvre Museum in Paris.

Discover the clocks and pendulums of Pierre II Le Roy 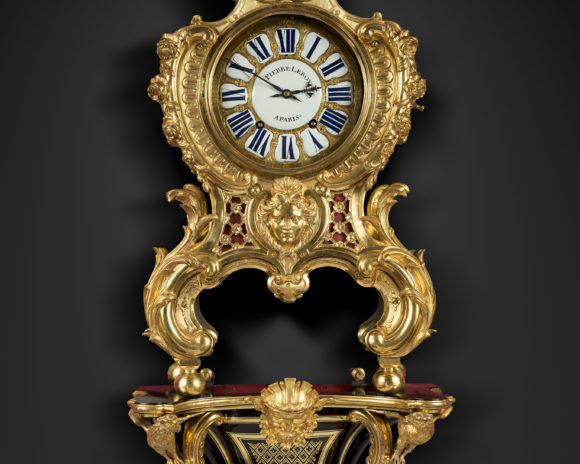 Le Roy - Cressent
Exceptional Rococo Gilt Bronze and Brass and Tortoiseshell or Eb...
Back
We use cookies to ensure that we give you the best experience on our website. If you continue to use this site we will assume that you are happy with it.Ok