Gérard-Jean Galle was the son of Claude Galle (1759-1815), one of the most important Parisian bronze casters of the late 18th century and the Empire period. After having led a brilliant military career in Napoleon’s army, Gérard-Jean took over his father’s workshop in 1815. He made exceptional bronze pieces, often basing them on original sketches done by his father. In 1819, during the Exhibition of the Products of Industry held at the Louvre Museum, he was awarded a silver medal for his bronze clocks and lighting instruments. He subsequently became the supplier to the crown and the aristocracy, including the Duke de Richelieu, the Marquis de Martel and the Viscount de la Rochefoucauld. However, the July Revolution of 1830, and the accession of the Orléans family to the throne, led his business to go into decline. He went bankrupt and died in 1846. Today, some of Galle’s pieces are in important private and public collections, among them those of the Château de la Malmaison, (the former residence of Napoleon’s wife Josephine de Beauharnais), and the Musée Marmottan in Paris.

Discover the clocks and pendulums of Gérard-Jean Galle 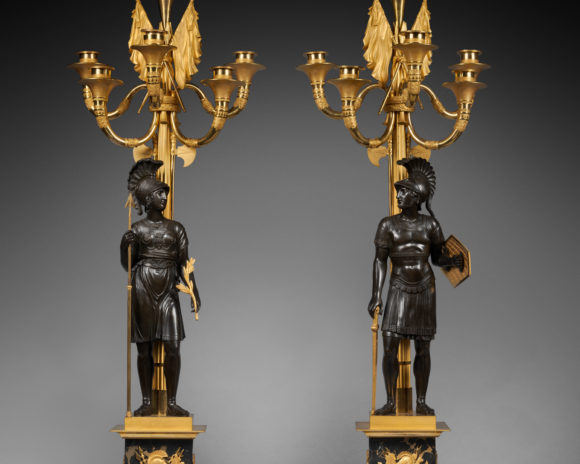 Galle
Important Pair of Six-Light Candelabra in Portor Marble and Pati...
Back
We use cookies to ensure that we give you the best experience on our website. If you continue to use this site we will assume that you are happy with it.Ok